God of war of the Russian Imperial Army of the First World War. Some features of the combat use of Russian artillery. Part of 1

November 14 2017
23
During the First World War, artillery becomes a true "God of War."
We have repeatedly written about artillery in general and about Russian artillery in particular (see 1914 artillery of the year; Catch up and overtake; Together with the infantry; Maximum-gauge howitzersl; Tractor and self-propelled; Spit of victory and others) of this fateful era.


I would like to take a look at some features of the tactics of the combat use of Russian artillery - the kind of troops that played a key role in many battles of the First World War.

The prewar statutes and instructions of the Russian army noted that artillery in fire is stronger than infantry, but less stable in battle, and the flanks are its weakest place.

The Field Service Charter, defining the most important tasks facing this kind of troops in combat, noted that at the beginning of a collision with the enemy, the artillery supported the deployment of infantry into combat order, and during the offensive fire paved the way for the latter - hitting targets tasks. For this, the artillery must take positions from which it can fire at these targets with real fire. [Charter Field Service. SPb., 1912. C. 186 - 187].

During an infantry attack, artillery concentrates fire on attacked targets or on reserves. It is indicative that even before the war, statutory norms appeared in Russia, dedicated to artillery of direct support for infantry. According to them, such batteries should be advanced to the distances closest to the enemy - closer to the advancing troops. Their main task is to support the attack, help their infantry to establish themselves in the seized area of ​​the enemy position, assist in the pursuit of the overthrown enemy, and if the infantry will have to withdraw, cover fire retreat [Ibid. C. 187].

Giving a description of the combat tasks of artillery, the statutory norms noted that the main assistance of the artillerymen to the infantry consists in opposing the approach of the enemy, firing dead spaces and inaccessible areas, fire support of the advancing and retreating infantry. During the forced withdrawal of infantry from the occupied artillery positions, the task was set to stop the development of the success of the enemy - in order to allow his infantry to clean up and resume combat. Moreover, the artillery, even shooting its shells, should not leave positions [Ibid. C. 187-188]. 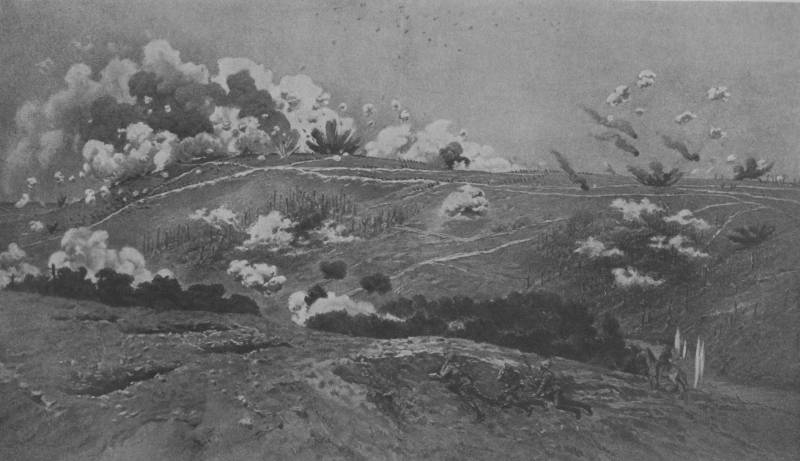 It was ordered to maintain the closest connection between artillery and infantry. Light field artillery is included in combat areas (preferably by battalions) of infantry: if artillery is put into action massively from the very beginning of the battle (in order to achieve a fire superiority over the enemy), this will achieve a decisive impact on the outcome of the battle. Part of the guns remains in the general reserve. In some cases, it was allowed not to distribute guns in combat areas, and focus on individual positions - on the so-called. artillery sites.

Horse artillery should take up positions mainly outside the flank of the attacking cavalry and possibly farther ahead of such a flank. If the cavalry gone ahead closes the target, the horse artillery must switch to enemy reserves or, changing the position, continue to fire on the enemy’s battle formations, and in case of failure, cover their cavalry’s retreat.

Mortar divisions and heavy field artillery, which are part of the army corps, could also be introduced into the combat units and formations or remained at the disposal of the corps command. The main requirement in the application of heavy artillery - massing its fire.

Already in the pre-war manuals it was indicated that, depending on the situation, the fire control of all artillery or artillery of several combat sectors may be concentrated in the hands of the “senior artillery commander”. It was about introducing the institute of the artillery inspector, focusing in his hands the leadership of all artillery units on the corresponding position. By understanding this situation, the allies and opponents of Russia came later. 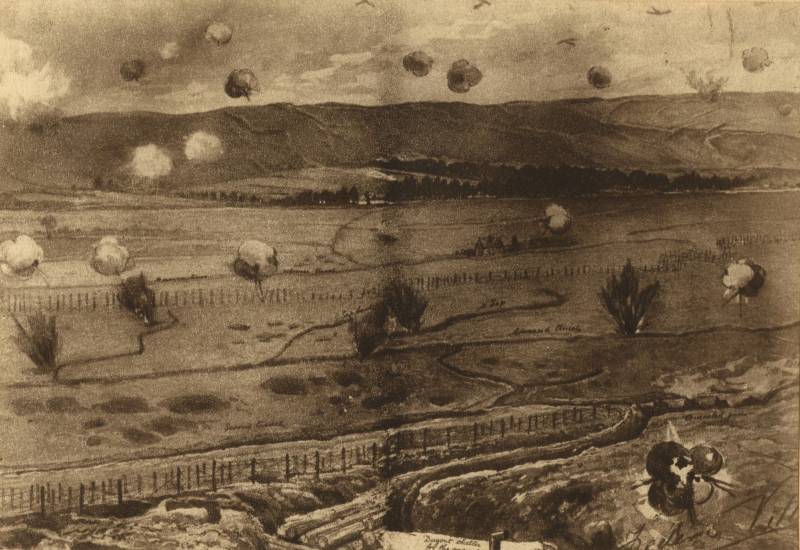 For better destruction of targets, the artillery grouping was recommended to be positioned in such a way as to be able to fire the enemy with flank fire. 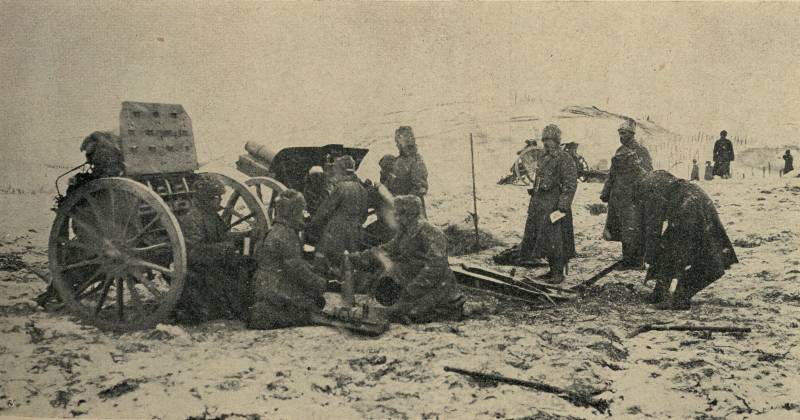 An eyewitness, describing the onset of the Russian 42 Infantry Division, noted how very quickly the Russian batteries had caused the batteries to silence part of the enemy’s batteries. And in the future Austrian prisoners officers talked about how they were shocked by the accuracy of firing the Russian battery at their batteries in closed positions. [Golovin N.N. From stories 1914 campaigns on the Russian front. Galician battle. The first period. Paris, 1930. C. 313]. And such characteristics, which reported on the superiority of the Russian artillerymen over the artillerymen of the enemy, are no exception - they are filled with memories not only of Russians, but also of German and Austrian front-line soldiers.

Yet the main purpose of the gunners in 1914 was the enemy infantry. A participant in the battle in Galicia, describing the picture of the work of Russian artillery he had seen, noted that all the visible wounds of the Austrians were exclusively from artillery fire. Charged boxes with knocked harness stood, a whole chain of skewed infantry lay - and many took it as live. [Ibid. C. 340].

During the Battle of Galicia, Russian artillerymen, unlike their Austrian counterparts, actively helped the infantry. And the actions of artillery became the most important factor of this strategic victory. For example, when the 13 of August in the area of ​​the 47 Infantry Division began a series of powerful attacks of the enemy, the Russian gunners thwarted the enemy offensive - the enemy suffered damage, slowed offensive pace. As a result, the Russian infantry, with the support of artillery, came out victorious, piling "whole stacks of Austrians" [Ibid. C. 238].

A front-line soldier, recalling the battles in East Prussia, noted how, during the Battle of Waplice, the Russian batteries opened fire on the advancing German infantry. Groups of German riflemen, now lying down, now rising from the ground, sank in the clouds of shrapnel breaks. After the smoke cleared, only the bodies of the dead and still crawling wounded were discovered - only the latter were before 400 [Zhelondkovsky V.E. Colonel Zheol'dkovsky's memoirs about participation in the actions of the XV Corps during the operation of the army gene Samsonov // Military Collection. Belgrade. 1926. Prince 7. C. 294]. 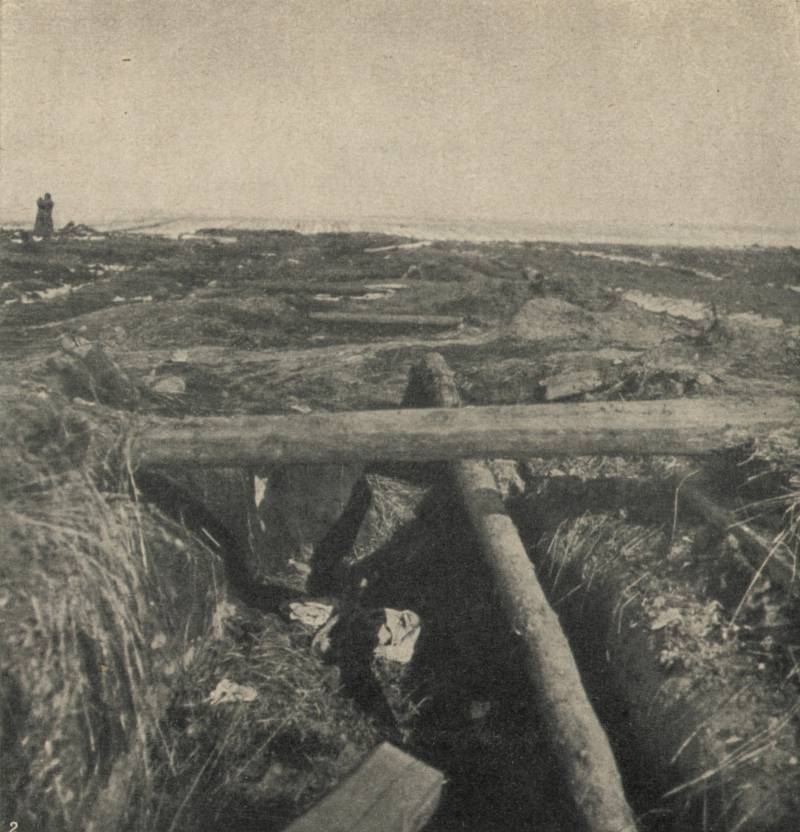 Even the relatively small amount of artillery possessed by the Russian army in 1914 was enough to win victories in many iconic battles. For example, the amount of fire weapons of Russian troops in the Battle of Rotten Lime did not exceed 2000 rifles, 12-16 machine guns and 10-15 guns per kilometer of the front. This was enough to create a fire superiority over the enemy. The 76-mm projectile gap covered the 15-meter square - and since the Russian 3-inch was giving 6 rounds per minute, the 48 of the infantry division guns were able to exterminate all living things for almost a kilometer area. In the field of the reach of field guns, everything that was not hidden under the ground or behind the folds of the terrain was destroyed - even the dug-in machine guns. We can recall the most well-known facts describing the fire victories of the Russian artillery - such as the defeat of the German 35 Infantry Division under Gumbinnen (27-I Artillery Brigade distinguished), the German 87 Brigade of the 17-th Army Corps Aid Aid (Aoften Aid) (Aid Actor) Infantry Division) and so on. The Russian army, in turn, felt on itself the full force of the fire of the heavy German artillery - for example, the fate of the Russian 25 Infantry Division, shot by artillery (24 guns per kilometer of the front), Germans 30-th Army Corps in Soldau.

The action on the open targets of the Russian 3-inch shrapnel was terrible. And one 8-mi light gun battery in a few minutes could literally destroy an infantry battalion or cavalry regiment. The officer, remembering what he saw in May 1915 in the battle near the villages. Radymno, writing like Austro-German infantry in whole ranks, "as if under the edge of a scythe," lay down under the fire of Russian artillery. The latter covered the entire visible space with a continuous layer of steel - destroyed people, compared trenches with the ground, completely changing even the terrain. Gunshot roar merged into a creepy continuous hum [Ververn B.V. 6-I battery. 1914 - 1917 The story of the time of great service to the motherland. T. 2. Paris, 1938. C. 32]. 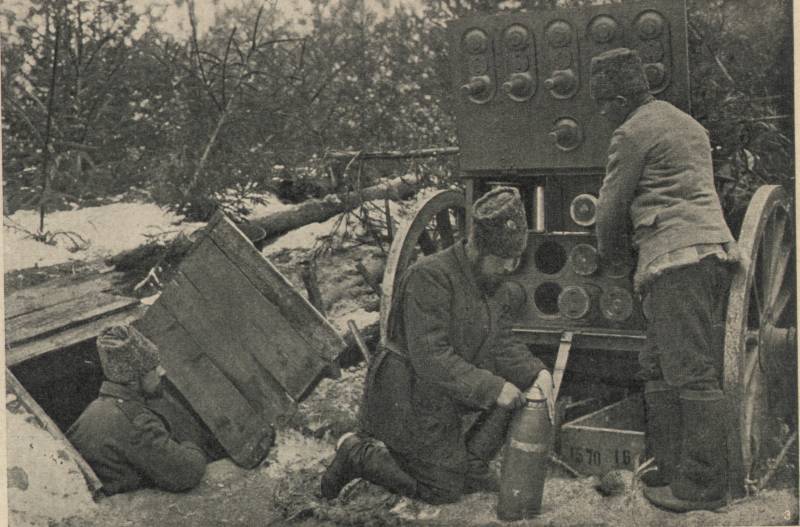 But the field gun was weak to destroy fortified targets. In addition to the shrapnel, the high-explosive grenade was part of the ammunition of the 76 field gun. People who came under the influence of a grenade turned into a sieve, and most of the buildings (including stone ones) also made their way through. But the grenade was rather weak for the destruction of concrete and earthen shelters.

Moreover, the heavy 42-linear (107-mm) gun, significantly exceeding the German and Austrian counterparts in its accuracy, flatness of the trajectory, long-range (10 km with shrapnel and 12 km with grenade) and the area affected (at medium distances in 4-5 km - about 1 km in depth) was also weak in actions against shelters.

It needed howitzer artillery. The howitzer was designed to destroy earthen and other shelters - the high-explosive action of the howitzer shell (bomb) was more powerful. Howitzer shrapnel was used to destroy closed targets that occupied a wider area. In terms of firing range (over 7 km), the Russian 122-mm howitzer was the most long-range in its class, second only to the French “classmate” in terms of rate of fire. 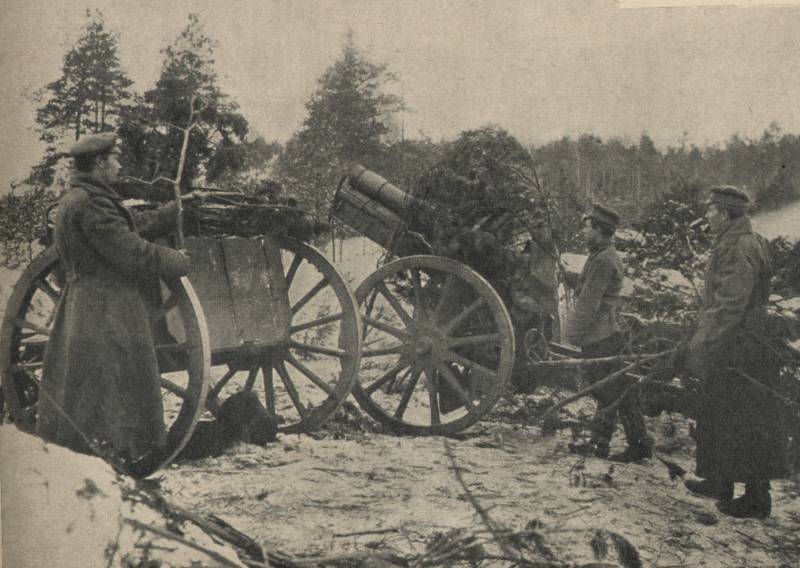 Mortar (howitzer) batteries should be used to destroy closed targets, artillery and infantry in the trenches; infantry in settlements and in the forest, the destruction of strongholds. 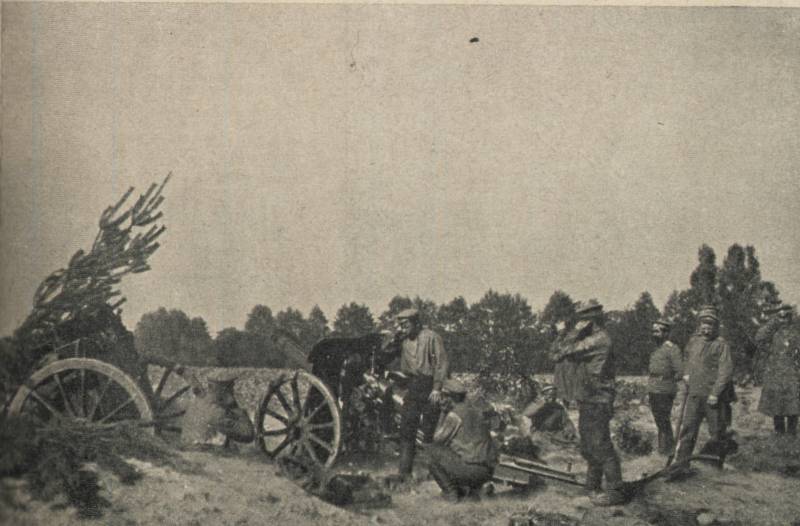 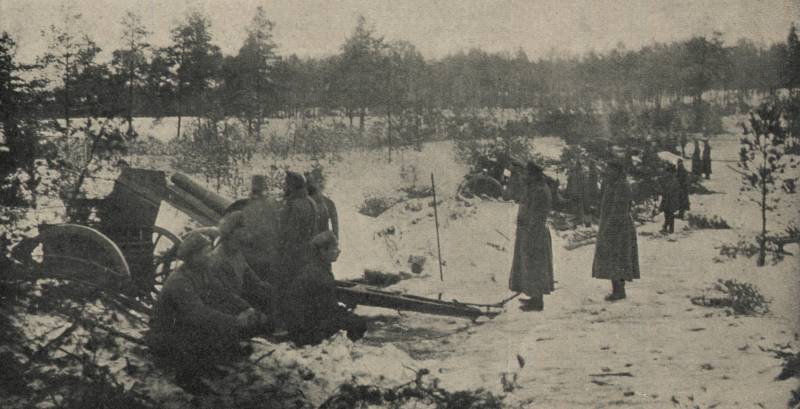 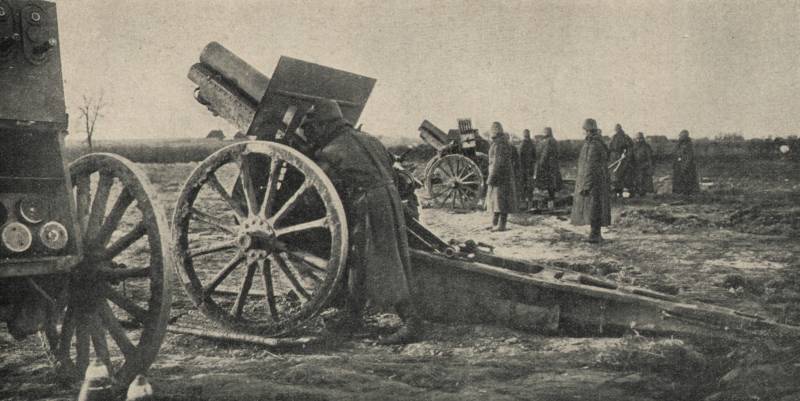 The combined use of light and heavy artillery seemed expedient.

In the offensive, artillery concentrates fire on as many of the barrels as possible on the enemy’s troops and strongholds on the attacked sector, on reserves, leading a counter-battery struggle.

In defense, artillery, acting primarily from closed positions, concentrates fire on the most important approaches to the line of defense of its troops, paying special attention to shelters and dead space in front of defensive lines.

Ctrl Enter
Noticed oshЫbku Highlight text and press. Ctrl + Enter
We are
The action "Service under the contract - your choice!" In Rostov-on-Don. Aerobatic team "Russian Knights"The action “Military service under the contract is your choice!” In Rostov-on-Don: future contract servicemen, exhibitions and “Russian Knights”
Military Reviewin Yandex News
Military Reviewin Google News
23 comments
Information
Dear reader, to leave comments on the publication, you must sign in.