January 30 2017
37
What was the organization of the Russian, German and French artillery to the beginning of the First World War?


By 1914, it was assumed that the impending war would be of an intermittent nature - both Russia and France were building the organization of their artillery, based on the principle of transience of armed confrontation. Accordingly, the nature of the future war qualified as maneuverable - and the artillery of the warring armies, first of all, should have such a quality as tactical mobility.

In a maneuverable battle, the main purpose of artillery is the living force of the enemy, while there are no serious fortified positions. That is why the core of the field artillery was represented by light field guns 75-77-mm caliber. And the main ammunition - shrapnel. It was believed that the field gun with its significant, like the French, and, especially, the Russians, the initial velocity of the projectile, will perform all the tasks assigned to the artillery in the field battle.

Indeed, under the conditions of a short-lived, maneuvering war, the French 75-mm gun of the 1897 model took the first place in its tactical and technical characteristics. Although the initial velocity of its projectile and inferior to the Russian three-inch, but this was offset by a more favorable projectile, more economical spending their speed in flight. In addition, the gun had greater stability (i.e., the instability of the pickup) after the shot, and hence the rate of fire. The French gun cannon's device allowed it to automatically conduct lateral horizontal shelling, which from an 2,5-3 distance of thousands of meters made it possible for some minute to fire at the 400-500-meter front.

For the Russian three-inch the same thing was possible only by five to six turns of the entire battery with a cost of at least five minutes of time. But in the flank attack, at one and a half minutes, the Russian light battery, firing with shrapnel, covered the area to the depth of 800 m and a width of more than 100 m with its fire.

In the struggle to destroy the manpower of the French and Russian field guns was not equal.

As a result, the 32-Battalion Russian Army Corps was equipped with 108 guns - including 96 field 76-mm (three-inch) guns and 12 light 122-mm (48-line) howitzers. Heavy artillery in the corps was not. True, before the war there was a tendency to create heavy field artillery, but three-battery heavy field battalions (2 batteries 152-mm (six-inch) howitzers and one - 107-mm (42-linear) guns) existed as if by exception and organic connection with shells did not have. 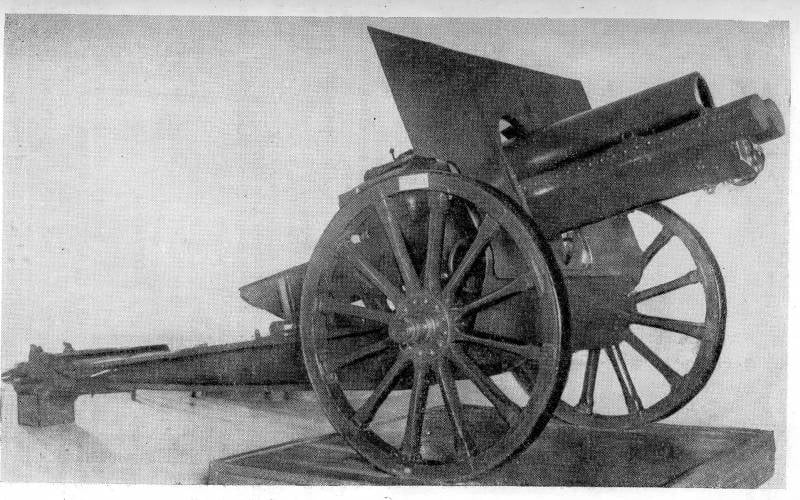 A little better was the situation in France, which had 120 75-mm field guns on the 24-battalion army corps. Heavy artillery in divisions and corps was absent and was only available with armies — a total of only 308 guns (120-mm long and short guns, 155-mm howitzers and the newest 105-mm long Schneider gun of the 1913 model). 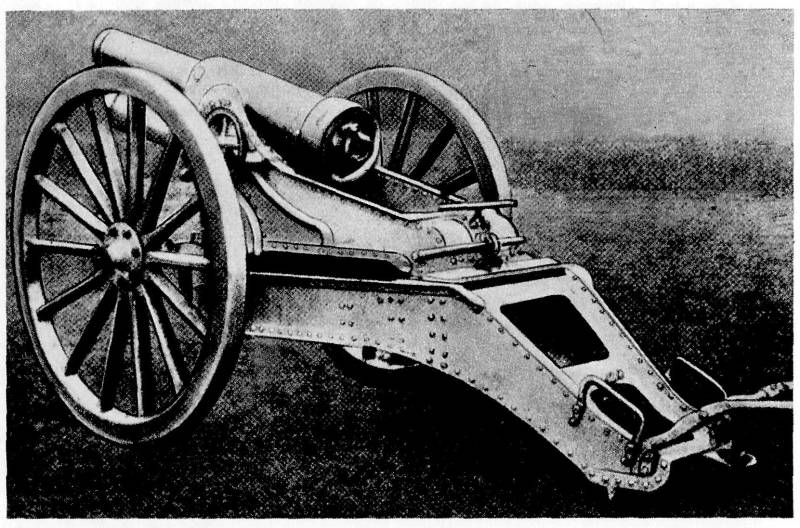 Thus, the organization of artillery in Russia and France was primarily the result of underestimating the power of rifle and machine-gun fire, as well as the fortification gain of the enemy. The statutes of these powers at the beginning of the war required artillery not to prepare, but only to support an infantry attack.

In contrast to their opponents, the organization of German artillery was built on the correct foresight of the nature of the coming military clash. On the 24-Battalion Army Corps, the Germans had 108 light 77-mm cannons, 36 light-field 105-mm howitzers (divisional artillery) and 16 heavy-field 150-mm howitzers (corps artillery). Accordingly, already in 1914, heavy artillery was present at the corps level. Since the beginning of the positional war, the Germans created divisional heavy artillery, completing each division with two howitzer and one cannon heavy batteries.

From this correlation it is clear that the Germans saw the main means for achieving tactical successes even in field maneuvering combat in the power of their artillery (almost a third of all the available guns were howitzers). In addition, the Germans reasonably took into account the increased initial velocity of the projectile that was not always necessary during the flattening of shooting (in this respect, their 77-mm gun was inferior to the French and Russian guns) and accepted as non-122-120-mm lightweight caliber for their opponents, and 105 mm - that is, the optimum (in combination of relative power and mobility) caliber.

If the 77-mm German, 75-mm French, 76-mm Russian light field guns roughly matched each other (as well as the 105-107-mm heavy field guns of the opponents), then the Russian and French armies of the German 105-mm divisional howitzer are not have had.

Thus, by the beginning of World War I, the basis for organizing the artillery means of the leading military powers was the task of supporting the advance of their infantry on the battlefield. The main qualities imposed on field guns are mobility in the conditions of a maneuverable war. This trend also determined the organization of the artillery of the major powers, its quantitative ratio with the infantry, as well as the proportionality of light and heavy artillery as applied to each other.

Thus, the ratio of the number of artillery that was part of military units was expressed by the following number of guns per thousand bayonets: for Russia - around 3,5, for France - 5 and for Germany - 6,5.

These figures clearly illustrate both the views on the use of artillery in 1914, and the resources with which each great power entered into a world war. Obviously, the German armed forces were closest to the requirements of the First World War.