October 30 2016
29
Before 1914, analysts believed that the impending war would be short-lived. Its character was defined as maneuverable and purely field - accordingly, the artillery must first of all be tactically mobile. In a field battle, its main goal is manpower, there are no serious fortifications. Therefore, the bulk of the field artillery of the opponents was represented by light guns of the 75 – 77 caliber, whose main projectile was shrapnel. Russian three-inch took a prominent place in this series.


A field 76-mm (three-inch) gun with its significant initial projectile speed was able to solve all the tasks faced by artillery in a field battle. For example, when flank fire in one and a half minutes, the Russian light battery when shooting with shrapnel easily covered with fire 600 – 800 square meters with a depth of over 100 meters in width.

This gave great value to light field guns in the destruction of manpower. By the beginning of World War I, the Russian 32-battalion army corps had 108 guns, including 96 field 76-mm guns.

Unlike enemy artillery, our artillery could fire from any positions - open, half-closed and closed. The very first battles in Galicia and East Prussia in 1914 showed the ability of the Russian gunners to act from closed positions. The duels of the batteries, which opened fire from open positions, were also won mainly by Russian artillerymen.

An eyewitness wrote: “It was evident that the offensive units of the 42 division and the exploding shells of both ours and the enemy .... Very soon our batteries silenced some of the enemy’s batteries. Subsequently, the captured Austrian officers said that they were amazed at the accuracy of firing the Russian battery at their covered batteries. ” These characteristics of the superiority of our gunners are full of memories of war veterans.

The main objective in 1914 was infantry.

An eyewitness described the picture of the battle in the following way: “The work of our artillery was visible everywhere on the field ..... all visible wounds of the Austrians were exclusively from artillery fire. Here along the highway leading to Peremyshlyany, there is a row of charging boxes with dead harnesses. Against our 2 battery, there are a whole chain of dead people in 200 and many took it for real. ”

In the course of the Battle of Galicia, Russian artillery, in contrast to the Austrian, actively helped the infantry and often became the main factor of victory. When, in the 47 Infantry Division, a series of strong enemy attacks began at two o'clock in the afternoon on August 10, aimed mainly along the eastern left part of the position occupied by the 13 Infantry Kara Regiment, our batteries inflicted substantial damage on the Austrians, killing people killed and wounded and significantly slowing the attack. 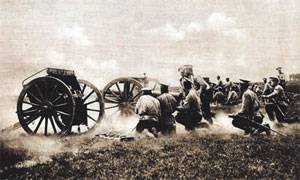 A participant in the fighting in East Prussia recalled: “The batteries opened fire. The German infantry advanced to us. Here and there, between clouds of tears of shrapnel, one could see groups of shooters rising from the ground and quickly moving forward ... The Germans were beaten off ... Slowly more smoke was melting from the breaks, gradually clearing the gaps between the bushes. And there are the bodies of those killed and crawling like worms, wounded. How many can be seen between the bushes, there are a lot of them ... The whole edge of the forest is littered with wounded Germans, 300 – 400 people seem to their eyes. ”

Even with a relatively small amount of artillery, which the Russian army had in 1914, it had enough power to achieve victory. The number of fire weapons that we had in the Battle of Rotten Lipa in Galicia did not exceed 10 – 15 guns, 12 – 16 machine guns and two thousand rifles per kilometer of the front. But it turned out to be sufficient to achieve fire superiority. After all, one gap of a three-inch projectile covered the area of ​​15 meters along the front. Regularly firing two shots per minute, the field gun was able to destroy all life on the surface of the ground in this area during the whole battle. And since each gave six shots per minute, it is obvious that the 18 guns of the infantry division will destroy everything in the square up to a kilometer. Even entrenched machine-gunners led to silence. Suffice it to recall the destruction of the German 35 Infantry Division by the fire of the 27 Artillery Brigade at Gumbinen, the 87 Brigade of the 17 Army Corps by the 25 Infantry Division at Sodenen, and so on.

The action of Russian three-inch shrapnel on openly located or moving targets was terrifying. A single eight-gun light battery could destroy a whole battalion of infantry or a cavalry regiment in a few minutes. The artillery officer conveyed his impressions of what he saw in May 1915: “The combined Austro-German forces are conducting desperate attacks on the entire front, especially pushing our positions near the village of Radymno. Their infantry lays down in rows, as if under the edge of a scythe, from our fire, concentrated at Radymno artillery, a continuous layer of steel covers the entire visible space, tearing trenches, instantly changing the entire area under fire. Columns of black smoke all grow in quantity and, finally merged, clouded a completely visible world. Like a black blanket thrown over our positions, in which bright flashes seem to roll the lights of gaps. The air trembles from the mass of all sorts of sounds, merged into one continuous hum ... "It is not surprising that the enemy called the Russian three-inch" oblique death. "

The field 76-mm gun was armed, except for shrapnel, and a high-explosive grenade. People who accidentally fell into the area of ​​its operation, turned literally into a sieve, most of the residential buildings, not excluding stone, made their way with a three-inch grenade, but it turned out to be rather weak to destroy earthen shelters.

Ctrl Enter
Noticed oshЫbku Highlight text and press. Ctrl + Enter
We are
On the interaction of sea and field artillery during the warMyths of the Great Patriotic. Papier mache helmet
Military Reviewin Yandex News
Military Reviewin Google News
29 comments
Information
Dear reader, to leave comments on the publication, you must sign in.