Together with the infantry

28 2017 June
4
What was the artillery of the direct support of infantry and regimental artillery during the First World War? About this artillery and some of the tools she used - this article.


In the context of positional warfare, artillery preparation could not completely neutralize all the obstacles hindering the advance of the advancing infantry.

In addition, the combat experience revealed that the task of retaining captured positions was much more complex than the task of capturing them. The movement of the infantry, the concentration on it of the enemy’s main fire attention, heavy losses, the mixing of units — all this made the advancing infantry very dependent on effective support from the artillery. It was the weakness of their own infantry fire weapons that left more than a significant imprint on the effectiveness of its attacks. But the tasks of artillery during the period of the infantry breakthrough were much more complicated - due to the rupture of communication, the impossibility of visual observation of the course of the battle and ambiguity of the situation.

Even with the vigorous assistance of artillery in accordance with a clear plan for its interaction with the infantry, for the latter there were still no reliable guarantees in the presence of effective fire support. The rampart, as the infantry advanced deep into the enemy's defenses, weakened. In addition, for the advancing infantry, the likelihood of encountering unliquidated resistance centers and enemy strongholds increased.

All this prompted the warring powers to seriously address the issue of imparting appropriate artillery units to the infantry: either temporarily, only for the period of the enemy’s defensive positions (escort weapons), or permanently, regular artillery units (regimental artillery) were poured into the structure of the infantry.

Initially, in the role of escort artillery, both in Russia and in France and Germany, field light, mountain and horse guns 75 - mm 77 caliber were used.

In Germany, an escort battery was assigned to each infantry regiment — it was gunned out among the advancing battalions. By the end of the artillery preparation, the battery was advanced to the infantry along pre-equipped bridges induced through trenches. During the offensive escort artillery fired mainly from open positions. The promotion took place initially on horses, and then (as they were lost) - by people with the help of special straps. Instead of charging boxes were used baskets with shells, transported by pack way.

By the end of the war, an 76-mm caliber (trophy) escort weapon appeared in Germany, either transported by a single horse in a hull or by four people on straps.

The fighters of the German assault battalion are pulling on the straps of a 76-mm gun. 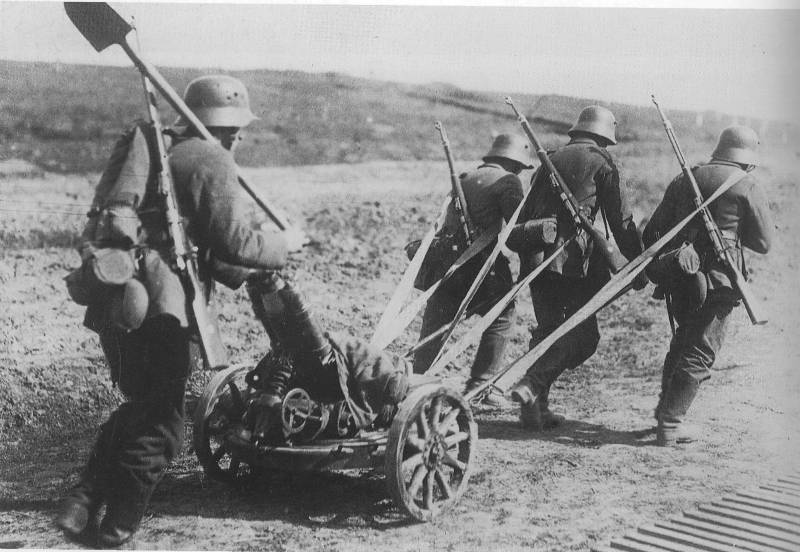 By the autumn of 1916, the number of medium-sized mortars in the German army was doubled, and the number of light mortars increased by 6. Mortars were improved - the range of fire of heavy and medium mortars increased from 750 to 1 thousand meters, and the light mortar received an elongated barrel and a more powerful charge to the mine (as a result, the range of fire increased to 1,3 thousand meters). Heavy and medium mortars were equipped with anti-recoil devices and a platform that allowed circular firing.

The evolution of light mortars was expressed in imparting flatness to their fire, i.e., the ability to fire at small angles (for example, tanks), which was achieved by staging them on a special carriage frame. In 1918, light mortars were mounted on high wheels and equipped with a gun-type carriage with a trunk and a coulter - in this position the mortar could shoot hard, and after being removed from the wheels - and mounted. The mortar was carried by one horse or four people on straps. Medium mortars received special lightweight front ends, thanks to which a pair of horses could be transported.

Thus, the Germans received a kind of melee regimental melee artillery, which had an undoubted (with the same caliber) advantage over cannon artillery - due to greater lightness, greater endurance (due to lower pressure of powder gases) and incomparably greater efficiency. 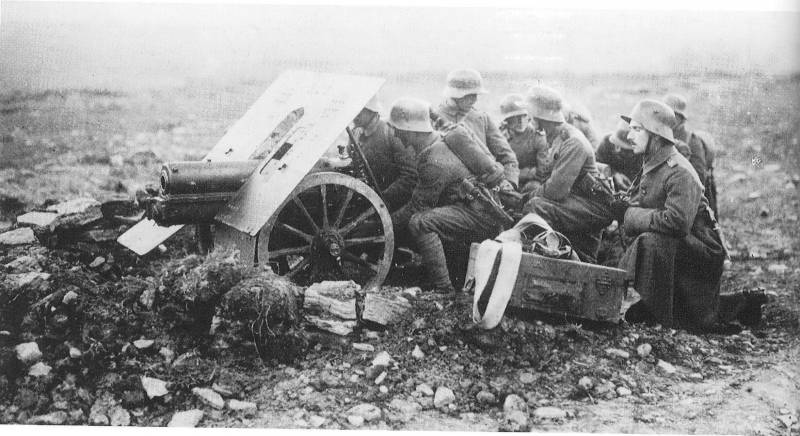 By the beginning of 1917, on the French front, the German army had more than 2,5 thousand light trench guns, the number of which a year later increased to 7-thousand, and by the end of the war - to 10-thousand units.

1. 75-mm mortar Juando. With the weight of the entire system, only 46 kg of fire was fired with an 3,2-kg projectile, which gave three times more fragmentation damage compared with a field projectile 75-mm gun. The range of fire - up to 1,5 thousand m, the rate of fire - up to 6-ti shots per minute.

2. Stokes mortar was heavier; fire rate to 25 shots per minute and range of fire to 2 thousand. 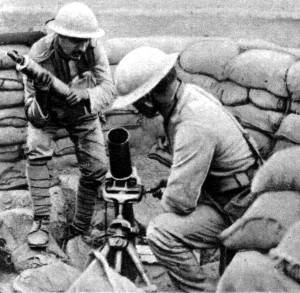 By July 1916, the battle period on the Somme, the French trench artillery had grown so much that on the 18-kilometer front of the breakthrough for every 35 meters there was one 58-240-mm caliber melee weapon. The mortars of the Juando and Stokes systems, which all divisions were equipped with at the beginning of 1918, were used by the French during the last offensive as an artillery for escorting infantry.

The infantry escort guns in Austria-Hungary included the 37-mm rapid-fire cannon (620 gr. Weight), moved by drag or on the back of a mule. In addition, short and long 75-mm guns of the Škoda system of the 1917 model were used. The first one weighed 366 kg, had a range of 3 lights of thousands of meters and was transported by a single horse or on straps. The second weighed 800 kg, transported by horses and on straps; range of fire - up to 7,7 thousand meters.

In the Russian armies, guns adapted for trench fighting and escorting infantry were in small numbers and were distributed unevenly along the front. They began to be used in the second half of the war. 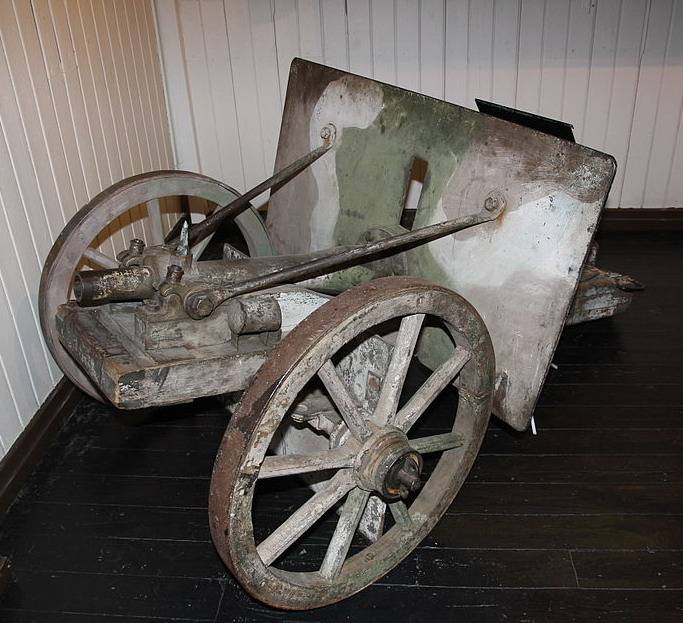 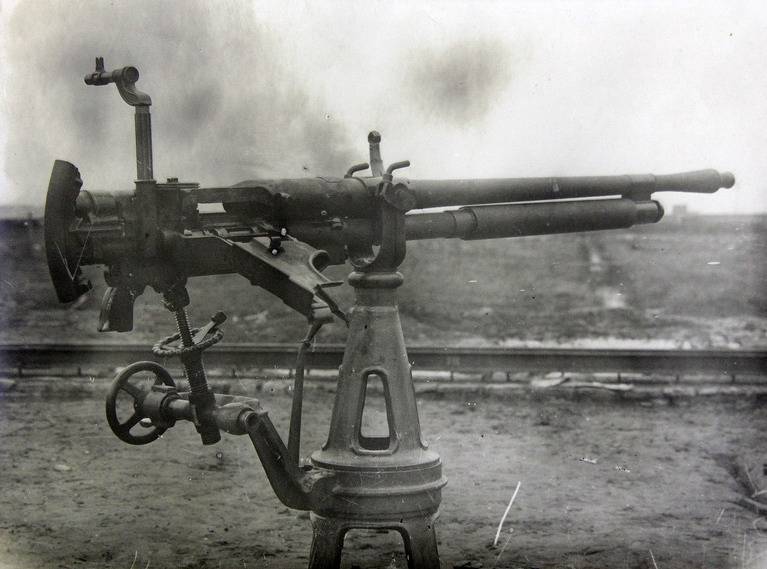 The above instruments were rare and later appeared in the army. Thus, in parts of the 17 Army Corps, which was permanently in World War I from the very beginning of the war, it was only at the end of 1916 that 3-inch assault batteries with guns of the 1910 model appeared for the first time.

Thus, the solution of the tasks of trench artillery and escort artillery fell almost exclusively on field cannon artillery.

To accomplish these tasks, trench artillery guns were advanced into or near advanced trenches — they had to destroy enemy melee weapons and flank shelling of approaches to their trenches. In the latter case, these guns were called antisurge.

The scheme of action of the regimental artillery looked as follows: the commander of the battery, who was under the regimental commander, after receiving information about the direction of the main attack from the latter, distributed the platoons and battery guns to the combat areas, after which the platoon commanders carried out reconnaissance.

After the end of reconnaissance, the guns were secretly put forward to the combat areas - first on horses, then on people (moved on the straps), and sometimes they had to resort to disassembling the tools into pieces. At the combat sites, the guns were placed at the disposal of the battalion commanders.

For the guns, as a rule, acting separately, firing positions were created (if possible in advance) - mainly in the trenches. For the preservation of weapons required advance equipment for each of them and a few spare items.

If the situation required, the gun rolled out on a direct lead (the sight was pre-installed, the rear sight and loading) - acting in the literal sense of the word along with the infantry.