15 May 2017
11
A brief overview of the tractor and self-propelled artillery of the Entente powers during the First World War.


The main means of the World War I was the horse. The horse moved packs, carts, guns. A pair of horses freely carried a weight of a ton, a four - two tons, and eight - up to 3,2 tons. The latter weight was the weight limit for horse traction. In many ways, this is precisely why the maneuverability of field heavy artillery on horse-thrust left much to be desired. The weight of the heavy guns was impressive - which was especially true for the French front, especially heavily loaded with equipment.

From the very beginning of the positional war on the French front, which required the use of powerful artillery, the question arose of giving it special maneuverability. Maneuverability was in demand both during troop transfers and on the battlefield.

In carrying out the most significant operational transfers, when infantry were quickly transported by car, the artillery provided for their vehicles, despite the widely developed network of good roads on the French front, often lagged by tens of hours and sometimes by several days. All this required the introduction of mechanical (tractor) thrusts for the guns, which made it possible for artillery to keep up with the infantry when conducting troop movements. A standard tractor (for example, Clayton) could move the weight 10 times the limit of the horse-eight - 32 tons. This, in turn, made it possible to increase the power of heavy artillery calibers.

The advantages of the tractor artillery parts were: higher average speed of movement (from 5 to 15 km per hour), greater compactness of the walking columns (for example, the length of a horse cart 11-inch Schneider howitzer - 210 steps, while the tractor system of the same caliber - up to 120 steps), mobility (including when traveling over rough terrain) and a higher size of the average transition (instead of 60-70 km for horse-drawn batteries - 120-150 km for tractor batteries).

Of particular importance was the creation of self-propelled artillery.
The meaning of the introduction of the tracked pattern of movement was to strive to decompose the gravity (pressure) of the object when it was moving over a large area (in comparison with the working surface of the wheels). The corresponding mechanism was as follows. The base of the body (frame) had several roller wheels on transverse axes. On the front and rear wheels of the frame, raised above the ground, was put on a chain. It consisted of separate pivotally (by means of bolts) metal plates-shoes with special ribs (for coupling to the surface). The rear (gear) frame wheel, covered by a chain, was driven by a motor. In this case, the teeth of the rotating wheel, engaging with the transverse bolts of the shoe chains, gave it a circular motion along the wheels covered by the chain. As a result, the frame rollers in contact with it began to roll along the chain - and this caused a progressive movement of the entire frame, and, consequently, of the whole machine.

It was this scheme that allowed the British to appear at the front in the autumn of 1916 tanks to overcome trenches and shell funnels. Climbing the vertical slopes was the easier, the longer the tank. In many ways, the first tanks were precisely assault guns. Moreover, the French tanks were even called assault artillery.

During the war, the thickness of armor of tanks increases from 12 to 16 mm (frontal armor) and from 8 to 11 mm (side armor). German cars had 30 and 20 mm armor respectively. 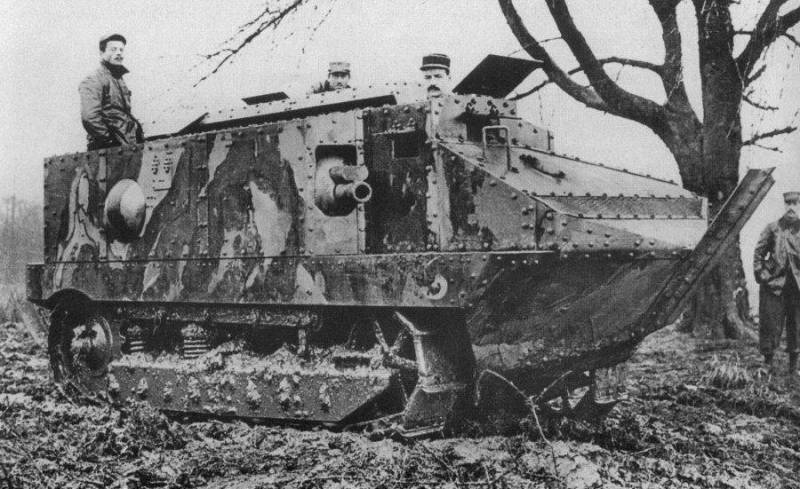 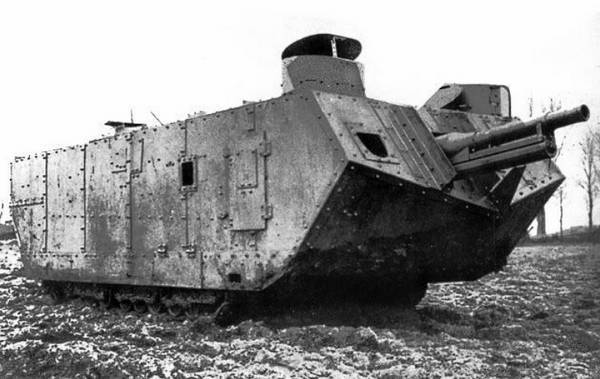 16 April 1917. 132 machines of the Schneider system participated in the battle. The first squadron of 82 vehicles began to attack in the 7 hours of the morning - at the time of the approach of the French infantry to the second line of the German defense. But soon the detachment came under such a disastrous fire of German artillery that, in the words of an eyewitness, the land around the tanks and under them worried as the sea from a cyclone. The commander of the detachment was killed in his tank. The squad lost 39 vehicles from enemy fire, and the infantry ebbed away, leaving the occupied German positions.

The second squadron of 50 vehicles started the attack also in the 7 hour, but was detected by enemy air reconnaissance after leaving the shelters - and accordingly fell under the barrage of German artillery. As a result, the attack ended in failure - only 10 tanks returned from combat.

In the future, taking into account these lessons, the Allies sought to use combat vehicles only before dawn - otherwise, the movement of these slug-shooters to the forward day inevitably led to huge losses. By the spring of the 1918, the French were constructing a new tank, the Renault, weighing only 6,5 tons, armed with one gun and a machine gun. These machines, in the number of 30 units, were first used by the French in June 1918 during a counter-offensive at the Retz forest. It was this tank that was the first machine to have the usual for us classic “tank” layout. That is, he was really a tank, not an assault weapon, like his earlier and heavier "brothers."

Later, in the battles on Marne in the spring of 1918, in the attack of the Americans in September at Tiancourt, in the Anglo-French attack in Picardy and in the final pursuit of the Germans from September 26 to 2, 1918 tanks acted with variable success, almost always suffered heavy losses. Thus, even during the German withdrawal, during the battles from 26 to 29 of October, the French tank unit lost an 51 machine from artillery fire.

In addition to the tanks that de facto performed the tasks of self-propelled artillery, the allies used self-propelled guns in the direct sense of the word.

These included, in particular, the French 75-mm gun of the 1916 sample. In the front part of the tractor there was a motor, and in the rear part of the installation — an instrument (moreover, during the shooting, in order to avoid tipping, the special coulters leaned back). This self-propelled unit developed speeds up to 25 km per hour.

In addition, there were Schneider 220 self-propelled howitzers - 280-mm caliber. 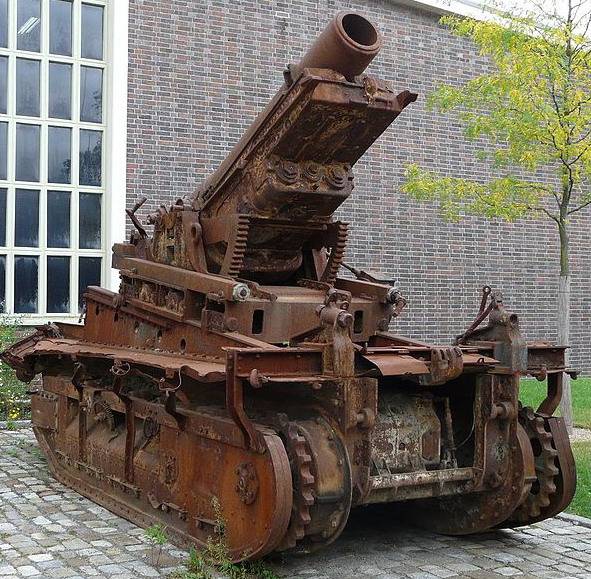 To reduce the recoil length, the Schneider 240-mm howitzer barrel after the shot moved along the frame, which, together with the top of the mast, also moved back and up. The rollback was braked by two compressors. The engine power of this self-propelled gun is 225 horsepower.

Wheel-tracked gun mounts also appear.
So, the 155-mm gun on the paw of the Christie system could move on a tracked or wheeled course. The speed reached: on a wheel track - 27, and on a caterpillar track - 15 km per hour. 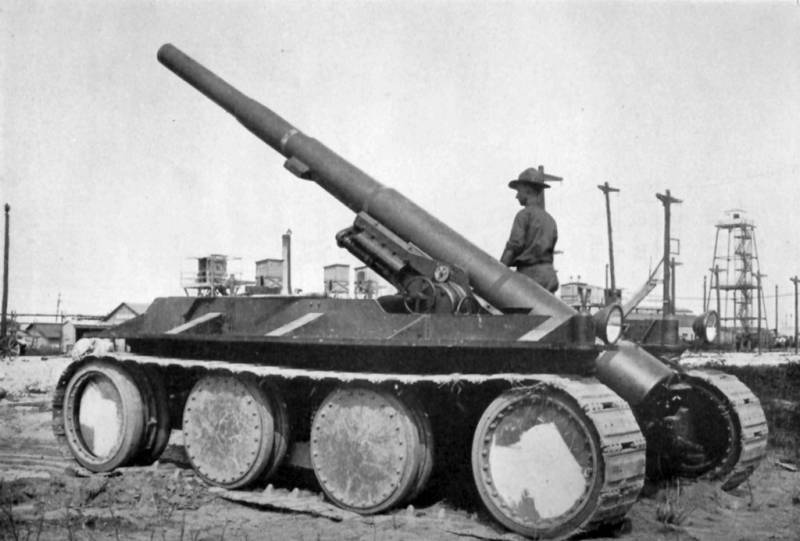 The main advantages of the first self-propelled units were: the speed of engagement of combat positions, constant readiness for battle, ease of maneuvering, the ability to overcome the rises, the short length of marching columns formed by self-propelled guns, the ability to pass through the sandy, viscous and cracked ground.

The most important shortcomings of these installations were: their weight, difficulty in selecting an appropriate shelter, high fuel consumption (and even when driving on good roads), as well as difficulty and inefficiency (unlike conventional artillery) of self-propelled marching movement in the same column with infantry.