Catch up and overtake

January 12 2017
9
And what was the heavy artillery of the opponents of Germany in the First World War - Russia and France? Let us briefly review the organization and composition of the Russian and French heavy field artillery, identifying the main trends and characteristics of the development of this type of artillery by the leading powers of the Entente.


In the First World War, the Russian and French armies, having underestimated the importance of heavy artillery, entered with 240 and 308 with heavy guns, respectively. They had to make up for the loss in the course of military confrontation — to the thunder of the guns of powerful German heavy artillery. Considering the economic and organizational possibilities of Russia and France, the first of these powers tried to catch up, and the second - and to overtake their powerful opponent.

Before the war, the Russian army had only 5 siege artillery battalions equipped with heavy (107-mm cannon and 152-mm howitzer) guns. With the beginning of the war, these divisions became the basis for the formation of field heavy artillery brigades. 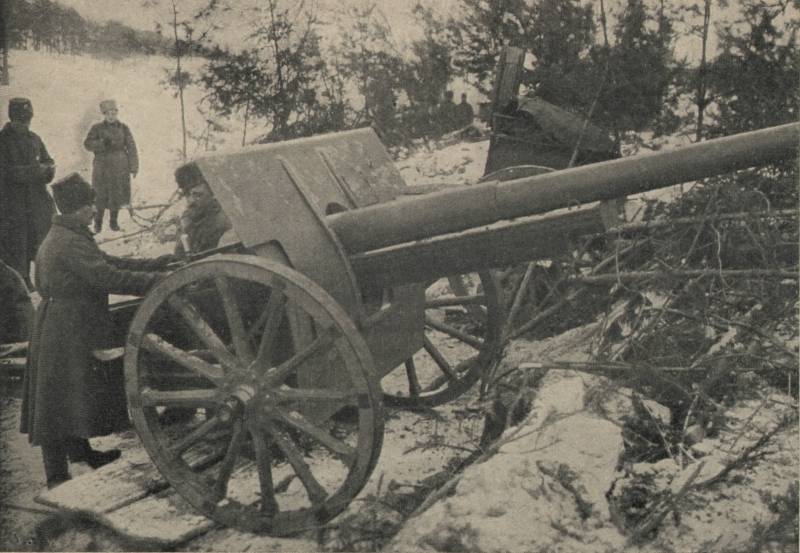 However, before the start of the 1917 of the year, Russian heavy artillery, being disproportionately small in number, did not sufficiently influence the course of hostilities. In addition, it was not organizationally linked to field units. Even as part of entire divisions, it was attached to the army corps only sporadically - in the areas of large operations intended. Usually, the heavy divisions were broken up in battery mode - and in this form they toured the corps and the armies.

For example, the 1916 Army Corps, which was active in the period of the Brusilov 17 breakout year, being in continuous battles from 22 May to mid-September, for the first time "met" with the Brest-Litovsk heavy artillery division near the towns of Brody - Radzivilly . Here the division supported the corps during the 2-week operation to capture Brody. The rest of the time the corps had only light artillery. With these resources, he made a breakthrough of the fortified positions of the enemy near the city of Kremenets, and also advanced to the city of Brody. Thus, from May 22 until the middle of July, the shock corps operated without the support of heavy artillery.

But by 1917, the proportion of Russian field heavy artillery had grown. Along with the types of guns already mentioned, 120-mm French and 105-mm Japanese cannons, 152-mm English and 150-mm German (trophy Krupp) howitzers appear on its armament. 152-mm guns were also used.

A special purpose heavy artillery (TAON) unit was created, which included 152-305-mm guns - mainly coastal and serf artillery systems. There were TAON and towed 203 and 228-mm Vickers howitzers (the so-called "tractor artillery"). The latter type of guns, as well as large-caliber howitzers, actively participated in the Summer Offensive of the South-Western Front in June 1917. It should be noted that the Russian Northern Front, due to the convenience of communication lines, as well as the importance of the direction it covers, was the most saturated with heavy field artillery. 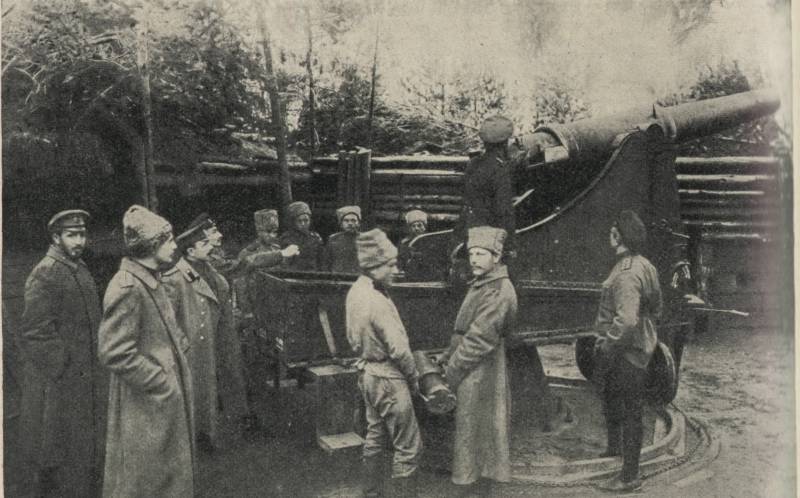 It should be noted that if the field heavy artillery, being part of military units (divisions, corps) and submitting to their command, with its power supplemented the activities of light field artillery, the special-purpose heavy artillery performed other tasks. TAON is a consequence of the transition of the war in positional forms. Being out of submission to ordinary military units, the TAON was at the disposal of the army command, being the most powerful means of operational reinforcement — the army artillery reserve. The role of special-purpose heavy artillery was to facilitate the implementation of army and front-scale strike operations, which required for their success the concentration of a powerful fist. Directly during the operation, the artillery of the TAON, attached to the shock army corps, united into artillery groups subordinate to their chiefs, as well as inspectors and artillery chiefs of the corps.

The power of the calibers that were part of the TAON, as well as its complete independence from the divisional command, allowed and allowed the use of heavy artillery solely as a powerful strike vehicle. In addition, such an organization was supposed to guarantee against any kind of abnormal weakening of artillery assets at the expense of other, not shock, sectors of the front.

In France, replenishment of heavy artillery in accordance with the needs of the front proceeded at a faster pace — all the more so since the positional war was established on the French front a year earlier than on the Russian. 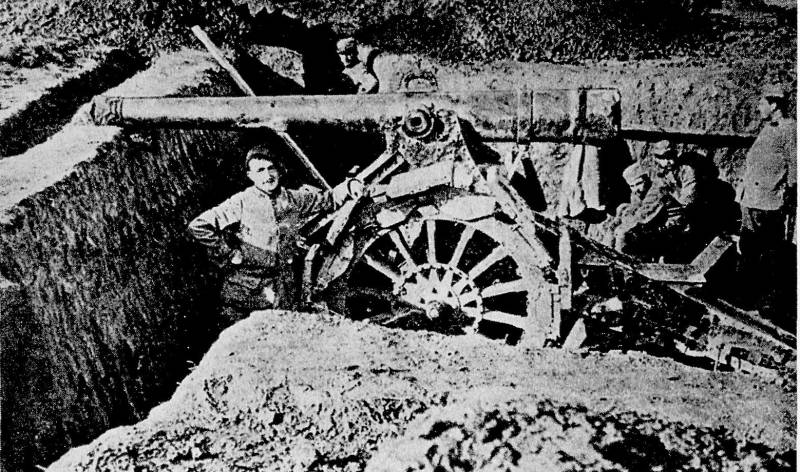 Given the presence on the French front of particularly pronounced forms of positional warfare, special attention was devoted to endowing field guns with howitzer properties. Thus, by introducing a reduced charge for the 75-mm rapid-fire gun, the French, in addition to increasing the steepness of its fire trajectory (including making it easier to select closed positions), could adapt their most massive cannon to the defeat of reverse terrain skates - where the main combat positions the adversary.

Banja guns were installed on special gun carriages that allowed firing at high elevation angles. So, the 155-mm long gun was placed on Schneider's lunket carriage, the latter allowing firing at an angle of 42 degrees, and thus increased the range of fire from 10 to 13,5 km.

By the end of 1915, France increased its heavy artillery from 50 to 270 batteries. By July, 1916, it was up to 4-x thousand modern guns. By this time, the French infantry divisions had 18 batteries (four-guns) 75-mm caliber, and 6-8 howitzer batteries. In addition, each army corps had its own corps artillery (18 batteries).

By January 1917, the French only had 782 heavy batteries on their northeastern front: 516 mounted on horse-drawn and 266 on tractor-made. By the spring of 1917, the French artillery in its composition reached the proportional composition that was recognized as optimal for a positional war - 45% guns and 55% howitzers.

By the end of the war, heavy artillery was to be integrated into infantry divisions - by the time of the truce, each compound was supposed to have 4 groups (12 batteries) 75-mm guns and 2 groups (4 batteries) 155-mm short Schneider guns 1917 of the year. The last of these guns, which had a range of fire to 11-km, decided to partially (in imitation of the Germans) replace the 105-mm howitzer - with a lighter and more mobile. Corps artillery of France at the end of the war consisted of 34-x corps artillery groups (on 8 batteries), which were armed with 105 and 155-mm guns.

Moreover, in spite of the fact that in 1918, the French had excellent 155-mm Fillet gun in corps artillery: high power with a range of 16 km and with a double-bore carriage (which allowed a side attack angle to 60 degrees), which moved on a car trap. , they adopted the 145-mm Saint-Chamon canon towed, which, of all the heavy field artillery guns, had the greatest firing range - up to 18-km.

The opponents of Germany and its allies did everything to make up their opponent in the construction of powerful heavy field artillery - and this was an important factor in achieving victory over the common enemy.