Many barrels - many bullets

November 25, 2011
26
Since the advent of the gunshot weapons his designers tried to increase the rate of fire, because the benefits of massive fire became clear almost immediately. For quite a long time, the rate of fire was increased indirectly: by training shooters. But if you do not train the soldier, the rate of fire will not increase significantly. Need some idea to improve the design of weapons. One of the very first and simple ideas was to equip the gun with several barrels.

The first samples of such systems appeared more than five centuries ago. But loading from the barrel, without diminishing the density of fire, had a bad effect on the overall rate of fire. As a result, the overall effectiveness of the weapon was not much higher than that of individual shooters. The idea with several trunks had to be postponed for the time being.

Austro-Hungarian mitraleza Montigny of the 1870 model of the year. The numbers denote the 1 recharging lever, the 2 shop, the 3 recess.

The time of multilateral systems came only in the middle of the XIX century. In 1851, the Belgian Montigny made a gun with a block of rifle barrels charged from the breech. The recently appeared unitary cartridges turned out to be very opportune. They were easy to charge in special clips that looked like a metal plate with holes. The clip was inserted into the breech of the installation and all the cartridges fired simultaneously. Due to the clip, compared with the guns of the XV century, the rate of fire has increased significantly. Already in 1859, this model was adopted in France under the name "mitraleza". In Russia, the word was translated literally - the penis. However, the bullets flew a small “flock” and the area of ​​destruction was low. It happened that one enemy soldier managed to “catch” several pieces of lead at once. Dispersion reached acceptable values ​​only at very large distances, where the energy of the bullets decreased to unacceptable values. Another problem of the first mitrales was the simultaneous firing of all trunks. In later models, ammunition savings were provided by alternately firing several rows of barrels. But with this innovation, the buckshot did not receive great fame. The fact is that the French did not bother to develop tactics for their use, and simply put them on the battlefield in rows, almost "anywhere," and not in potentially dangerous areas.

Over the ocean, in the United States of America, at this time the doctor R. J. Gatling was working on his brainchild. He also decided to use several barrels, but not for fire volleys. If a cartridge is to be reached in the barrel, then it shoots, and then it is necessary to throw out the cartridge case ... Why not make several barrels, each of which charges and throws the cartridge case, while others shoot? That is how Gatling argued. The result of his fabrications was the easel machine with six trunks. The shooter, like a barrel organ, twisted the knob in the breech of the weapon, setting in motion a block of barrels. Cartridges from the box magazine at the top of the gun under their own weight were fed into the chambers. For each turn of the block, each individual barrel had time to get a cartridge, shoot and throw out the cartridge case. Extraction of spent cartridges, it is worth noting, also carried out by gravity. A reservation must be made: the very idea of ​​a rotating barrel block was not new, by that time there already existed multiply charged pepperbox-type revolvers. The main merit of Gatling - the system of supply of cartridges and the distribution of the cycle of loading-shot-extraction in the course of the turnover of the block. 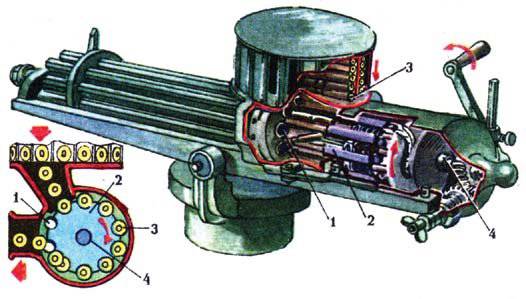 The original Gatling gun (Gatling gun) was patented in the 1862 year, and in 1866 adopted by the Army of the North. The first models could shoot at a rate of up to 200 shots per minute. Later, using gears, it was possible to bring the rate of fire to almost a thousand shots. Since the source of energy was external (for the then Gatling gun - a man), the machine gun was fired until there were cartridges in the store, there was no misfire, or the cartridge was wedged in the barrel. Later, an automatic weapon with an external drive will be called mechanized automatic. But before this name was still a few decades.

At the end of the 19th century, attempts were made to “separate” a person from the torsion of a handle and replace it with an electric motor. But at that time the electrical components were of such dimensions that no 2500-3000 shots per minute, to which they dispersed the machine gun, could not give them a start in life. In addition, the notorious X. Maxim has already launched his much more mobile machine gun, the maximum rate of which was at the level of the first Gatling apparatus. Gradually, multi-barreled machine guns were removed from service, and then they were completely forgotten.

A hundred years after doctor gatling

In the middle of the XNUMXth century, weapons with a high rate of fire were again required. In particular, it was required aviation and air defense: they now had to fight with such fast targets that they could not even have a rate of fire of one and a half thousand. It was possible, of course, to use machine guns like UltrashKAS (about 3000 rounds per minute), but its caliber was insufficient, and it was not profitable to process the design for other cartridges. Another factor that prevented designers from overclocking the classic design lay in temperatures. One barrel during continuous shooting heats up, and, having gained a certain temperature, can collapse. Of course, before that, ballistics will dramatically deteriorate due to deformation. This is where the Gatling system came in handy. There was already experience with accelerating it to two or three thousand shots, which, together with the new alloys for the trunks, looked encouraging. 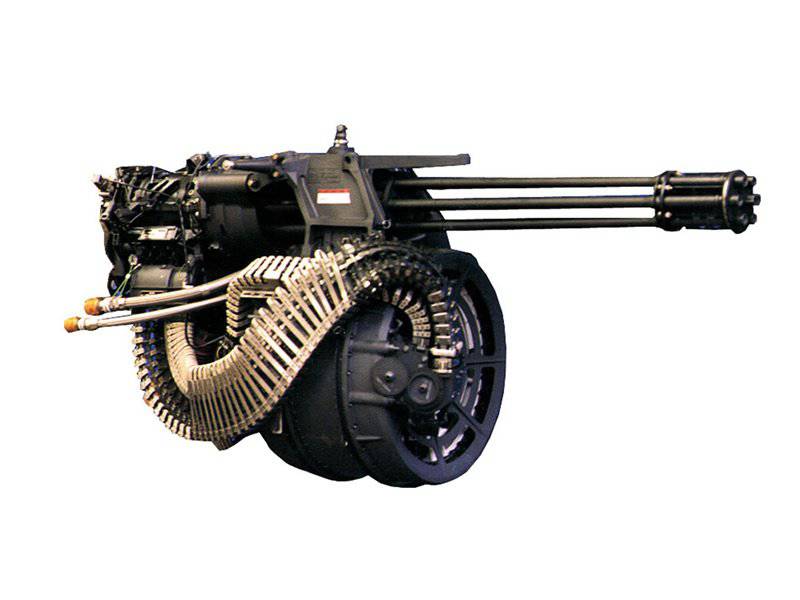 Experiments were going on in many countries, but the first production model of the “new” Gatling guns was the American M61 Vulcan. Developed in the 1949 year, it had six 20-mm trunks with a hydraulic drive unit. There are two shooting modes for the Vulcan - 4 and 6 thousands of shots per minute. The design allowed more, but there were concerns about the stable behavior of the cartridge belt links. Therefore, a new modification of the gun M61A1 received altogether no-load ammunition. Even six thousand shots were enough for the Vulcan cannon to become the standard weapon for American fighters for many years to come.

Later in the USA several more samples of “Gatling-Gans” will be created for a different cartridge and with a different drive. The smallest caliber was in an experienced machine gun with an XM214 Microgun 70-s electric drive - 5,56 mm; the greatest one is also for the experimental T249 Vigilante 56 of the same year - 37 mm. 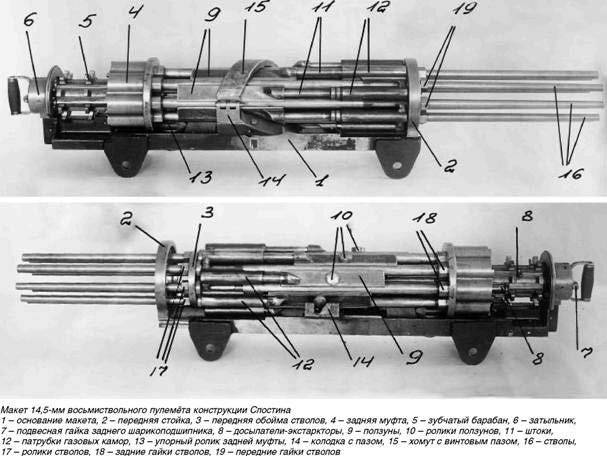 In the Soviet Union, too, did not ignore weapons with a rotating block of barrels. Back in 1939 I.I. Slostin made his eight-barrel machine gun caliber 7,62 mm. For a number of reasons (heavy weight and dampness of the structure), he did not go into the series, but some developments were used later. Work on multi-barrel systems was resumed in the early 60-x, when the fleet ordered gunsmiths six-barreled caliber 30 mm. Thanks to the Tula KBP and designers V.P. Gryazev and A.G. Shipunov, the sailors received a shipboard anti-aircraft installation AK-630, a little later, an aircraft gun GSH-6-30 will be created at its base. This gun had a rate of fire in 4-5 thousand rds / min, which, together with the caliber was more than enough to defeat most of the targets with which the fighters operate. Almost simultaneously with the 30-millimeter cannon, a smaller caliber GSH-6-23 (23 mm) was created. This was originally an aircraft cannon with a firing rate of up to nine thousand shots. Both Tula weapons, GSH-6-30, and GSH-6-23 have a gas engine to rotate the barrel assembly, but differ in starter: on the first gun it is pneumatic, on the second - pyrotechnic.

At the end of 60's, work began on multi-barreled machine guns. These were chetyrehstvolnye GSHG (Tula KBP) under 7,62h54R cartridge giving up 6 thousand. Rounds per minute and YakB-12.7 (TsKIB, designers and PG Yakushev Borzov BA) chambered 12,7h108 mm, with a rate-4 4,5 ths / min Both machine guns were intended for use on helicopters. In particular, the YakB-12,7 was installed on a number of modifications of the Mi-24 in a mobile unit.
Several interesting rumors or, if you prefer, legends are associated with Soviet multi-barreled guns. Both concern GSh-6-30. According to the first, this gun was tested not on trucks, like other weapons, but on tanks, because with a rate of fire of 6000 shots, a volley of less than a second in length was required to completely destroy the first. The second legend says that when firing from the GSh-6-30, the shells fly out so often that in the air they almost bump into each other. Interestingly, amusing things are also told about the American GAU-8 / A Avenger cannon (7 barrels, 30 mm, up to 3,9 thousand rpm). For example, when firing from it, the A-10 attack aircraft stops in the air from recoil. Here it is, the glory of the people.

Multiple weapon systems do not end with the Gatling scheme. There is another, slightly less popular and less well-known scheme - the Gusta system. In 1917, the German gunsmith K. Gast combined in one machine gun automation with a short barrel and multi-barreled. His machine gun called Gast-Maschinengewehr Modell 1917 7,92 caliber mm worked on the following principle: one of the two barrels, rolling back after a shot, through a special bracket charged the second barrel and vice versa. On tests, the Gusta machine gun accelerated to 1600 rounds per minute. 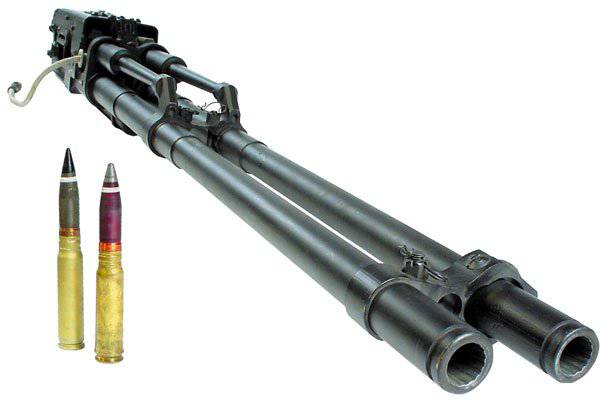 In 1965, the designers of the Tula KBP created their own version of the weapon according to the Gast scheme - GSH-23. She was equipped with various types of aircraft and helicopters. And both in the version of course weapons (MiG-23, Su-7B, etc.), and for installation on mobile rifle installations (Tu-95MS, Il-76, etc.). What is interesting, despite the lower rate of fire (up to 4 thousand shots per minute) than the six-barred GSH-6-23, GSH-23 was one and a half times lighter - 50,5 kg against 76.

At the end of the 70-x specifically for the then created attack aircraft Su-25 was designed gun GSH-30-2, also made according to the scheme Gast. Her two barrels give out only three thousand shots, but this is offset by millimeter 30 caliber. Later a version of the gun with longer barrels was created, intended for installation on Mi-24P helicopters.

Next year, the Gatling system will be 150 years old. Gusta's scheme is a bit younger. Unlike their predecessors - mitralese - these systems are actively used and no one is going to abandon them yet. At the same time, for a long time, multi-barrel systems did not have significant increases in the rate of fire. There are two main reasons for this: first, new materials and technologies are needed to increase the rate of fire. Americans, for example, have already had to deal with the jams of then-existing link shell belts. Secondly, it still makes little sense to accelerate guns or machine guns, frankly, a little: the density of fire will increase only with the consumption of ammunition. Based on the foregoing, we can assume that in the future the appearance of multi-barreled weapons will not change, but new materials and various know-how will be introduced.