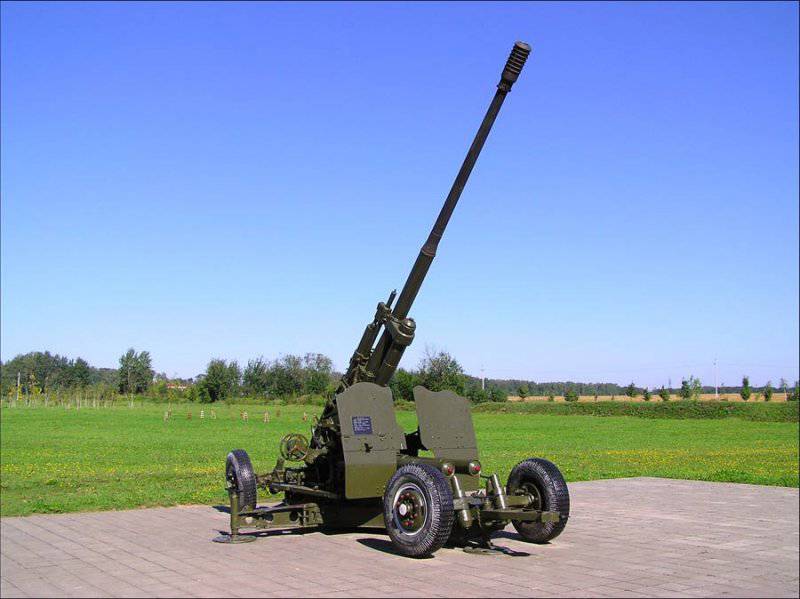 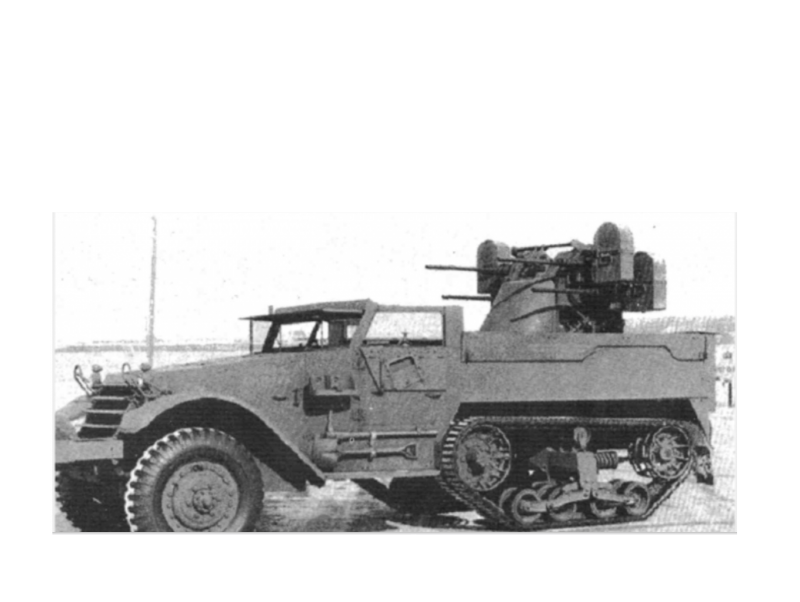 These ZSU proved to be very effective means of protecting tank units and formations on the march from air attack. In addition, M17 was successfully used during the battles in cities, firing densely on the upper floors of buildings.

The task of covering the troops on the march was assigned mainly to anti-aircraft machine-gun installations (ZPU) caliber 7,62-12,7-mm, mounted on trucks.

The mass production of the 1940-mm 25-K submachine gun in 72 was started only in the second half of the war due to difficulties in mastering serial production. A number of design solutions of the anti-aircraft gun 72-K was borrowed from the 37-mm automatic anti-aircraft gun mod. 1939 of the year 61-K. 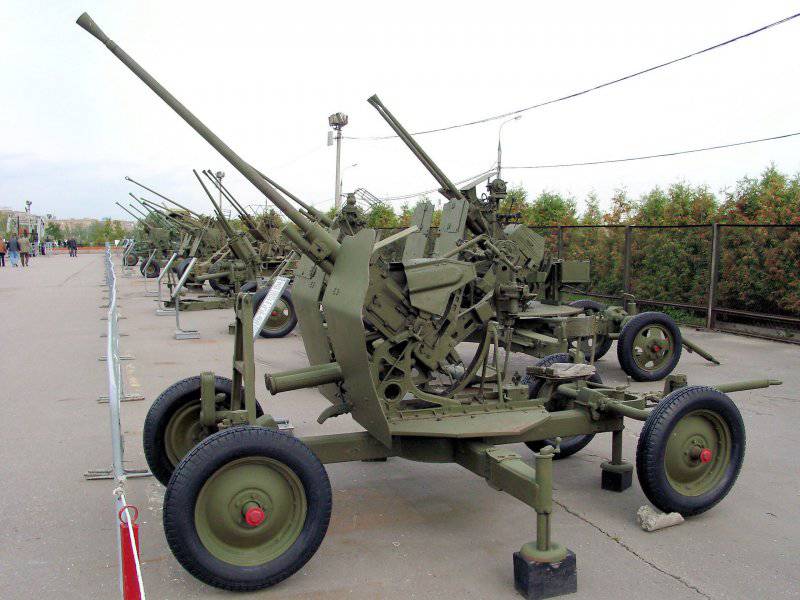 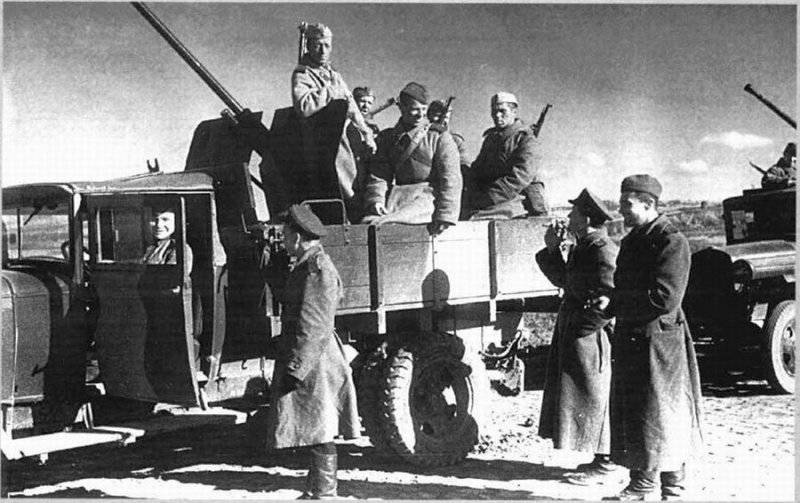 Anti-aircraft gun 72-K in the back of a truck

Anti-aircraft guns 72-K and twin installations 94-KM on their base were used against low-flying and diving targets. By the number of copies issued, they are far behind the 37-mm automata. 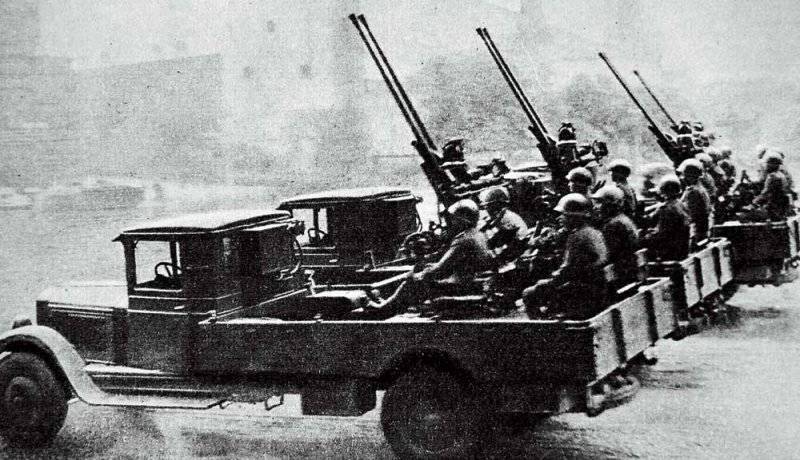 The creation of an anti-aircraft machine gun of such caliber with ring-loading loading does not seem to be fully justified. The use of a charger for a small caliber anti-aircraft machine gun greatly reduced the practical rate of fire, slightly exceeding the 37-mm 61-K machine gun by this indicator. But while much inferior to him in range, altitude and striking action of the projectile. The production cost of the 25-mm 72-K was not much less than the production cost of the 37-mm 61-K.
The installation of the rotating part of the gun on an inseparable four-wheel vehicle is subject to criticism on the basis of comparison with foreign anti-aircraft guns of similar class.

However, it should be noted that the 25-mm projectile itself was not bad. At a distance of 500 meters, an armor-piercing projectile with a mass of 280 gr., With an initial speed of 900 m / s., Pierced 30-mm armor along the normal.

When creating the unit with tape power, it was quite possible to achieve a high rate of fire, which was done after the war in anti-aircraft 25-mm machines designed for the Navy.

With the end of the war in 1945, production of the 72-K was discontinued, however, they continued to be in service until the beginning of the 60-s, until the 23-mm ZU-23-2 were replaced.

The 37-mm automatic anti-aircraft gun 1939 model of the year 61-K, based on the Swedish 40-mm Bofors gun, has received much more widespread use.

Automatic guns based on the use of recoil force according to the scheme with a short recoil of the barrel. All actions necessary for firing a shot (opening the bolt after the shot, extracting the liner, cocking the drummer, feeding the cartridges into the chamber, closing the bolt and lowering the hammer) are performed automatically. Manually carried out the aiming, pointing guns and feed clips with ammunition in the store.

According to the leadership of the gun service, his main task was to fight against air targets at distances up to 4 km and at altitudes up to 3 km. If necessary, the gun can be successfully used for firing at ground targets, including tanks and armored vehicles.

61-K during the Great Patriotic War were the main means of air defense of the Soviet troops in the front line. 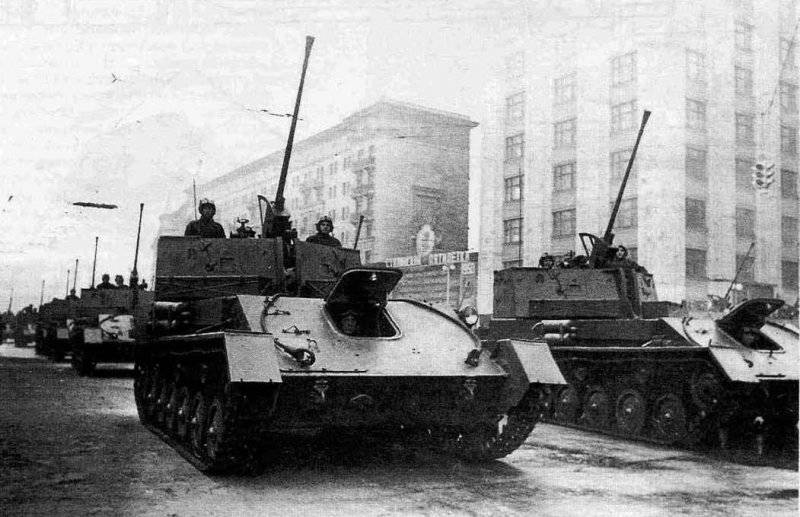 In order to increase the density of anti-aircraft fire at the end of the war, a two-gun B-47 unit was developed, consisting of two 61-K submachine guns on a four-wheeled wagon. 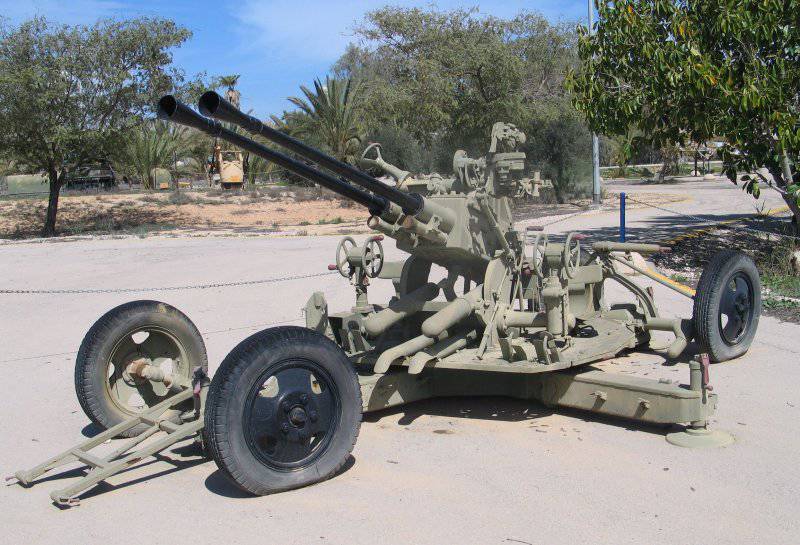 Despite the fact that 61-K production was completed in 1946 year, they remained in service for a very long time and took part in numerous wars on all continents.

37-mm anti-aircraft guns arr. 1939 was actively used during the Korean War by both North Korean and Chinese units. According to the results of the application, the gun proved to be positive, but in some cases there was an insufficient firing range. An example is the battle in September 1952 of the 36 P-51 aircraft with the 61-K battalion, as a result of which 8 planes were shot down (according to Soviet data), and the loss of the battalion was one of the crews.

In the postwar years, the gun was exported to dozens of countries around the world, in the armies of many of which it is in service today. In addition to the USSR, the gun was produced in Poland, as well as in China under the symbol Type 55. In addition, in China, on the basis of the tank Type 69 was created self-propelled twin anti-aircraft installation Type 88.

61-K was also actively used during the Vietnam War (using a semi-handicraft twinned self-propelled anti-aircraft gun based on the T-34 tank, known as the 63 Type). Used 37-mm guns arr. 1939 and during the Arab-Israeli wars, as well as during various armed conflicts in Africa and other regions of the world.

This anti-aircraft gun, perhaps, is the most "belligerent" in the number of armed conflicts where it was used. The exact number of aircraft shot down by them is not known, but it can be said that it is much larger than that of any other anti-aircraft gun.

The only medium-caliber anti-aircraft gun produced in wartime in the USSR was the 85-mm anti-aircraft gun mod. 1939
During the war, in the 1943 year, in order to reduce the cost of production and increase the reliability of the mechanisms of the gun, regardless of the angle of elevation, the upgraded 85-mm gun mod. 1939 g. With semiautomatic copying, automatic overrun speed control and simplified units.

In February, 1944. This gun, which received the factory index KS-12, went into mass production. 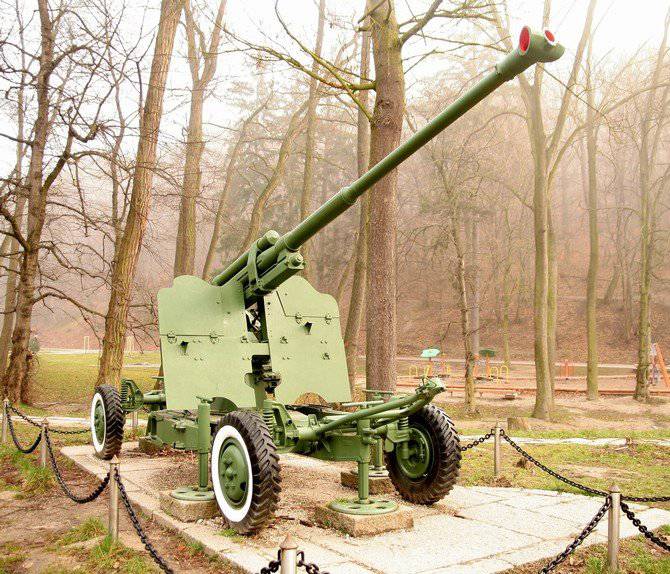 For aiming the gun according to the PUAZO data, the receiving devices connected by synchronous communication with the PUAZO are installed. Installation of fuses with the help of fuse installer is made according to PUAZO data or at the command of the commander 85 mm anti-aircraft gun arr. The 1939 was equipped with PUAZO-3 receiving devices, and the 85-mm anti-aircraft gun mod. 1944 - PUAZO-4. 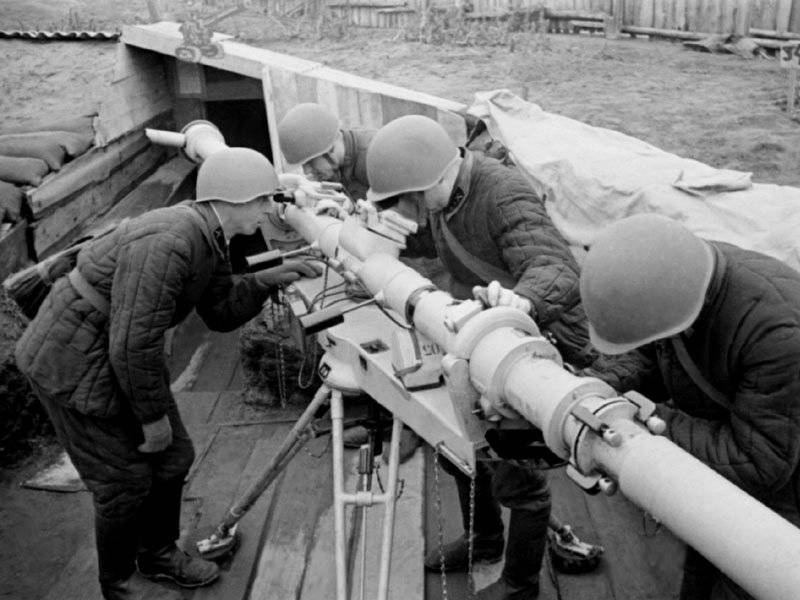 At the beginning of the 1947, a new 85-mm anti-aircraft gun, the KS-18, was put to the test.
The KS-18 gun was a four-wheeled platform weighing 3600 kg with a torsion bar suspension, on which a machine with a weight 3300 kg was installed. The gun was equipped with a tray and shearer shells. Due to the increased length of the barrel and the use of a more powerful charge, the height of the target area was increased from 8 to 12 km. Kamora KS-18 was identical with the 85-mm anti-tank gun D-44.
The gun was equipped with a synchronous tracking drive and receiving devices PUAZO-6.
The KS-18 cannon was recommended for use by military anti-aircraft artillery and RVK anti-aircraft artillery instead of 85-mm anti-aircraft guns arr. 1939 and arr. 1944

Anti-aircraft 85-mm guns were in service in the USSR until the middle of the 60-ies, until they were driven out by air defense forces with anti-aircraft missile systems.

Based on:
Shirokorad A. B. Encyclopedia of domestic artillery.
http://www.telenir.net/transport_i_aviacija/tehnika_i_vooruzhenie_1998_07/p6.php