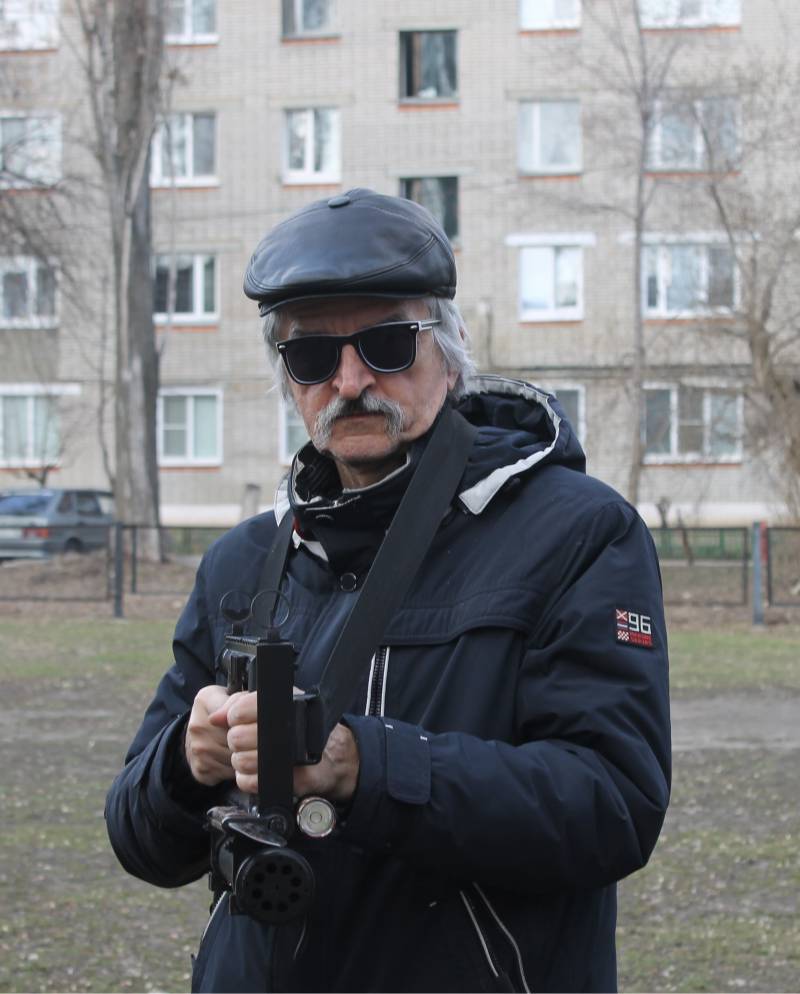 What kind of submachine guns today you will not see! There are also very unusual patterns. For example, this one, which we’ll tell you about today

Weapon the police. Who does what during self-isolation! Someone does not move away from the Internet, someone finally makes repairs to the joy of his wife. I, too, did not have an excess of free time. However, I would like to begin the story of what this time has poured out by referring to the material of our permanent author A. Staver “What can replace the usual Kalashnikov: about the prospects of small arms”. There was a lot of interesting things about the prospects in the field of small arms for the army. But everything that was discussed there can justifiably be applied to weapons for the police!

What should it be in the XNUMXst century? Of course, effective: who needs an ineffective weapon? It’s universal enough, as there are more and more challenges to the police forces. In addition, it should be technologically advanced and fairly cheap. And this is also, of course, an important requirement. And it follows from the current trend towards the unification of production. That is, if all of its greater part is transferred to the level of computer production, then the weapon itself must be produced at the same factories as computers. Ideally, a shooting computer should appear in front of us. But what about the “impulse”, well, the one from the nuclear explosion, about which the supporters of the good old iron love to talk so much? Yes pah on him! Firstly, there is protection, and secondly, this is not relevant for the police. And thirdly, now in the army there is a mass of all kinds of electronics, which seems to be also afraid of impulse, but for some reason it is becoming more and more. So let's forget about it right away.

There is one more thing. The world is changing. The cost of human life is growing. Which, incidentally, was shown by the coronavirus epidemic. And that means that the day is not far off when the developed countries begin a new arms race, not nuclear, but simple, but technologically sophisticated. And reliable "pieces of iron" will be declared weapons of terrorists and their very presence in a person or country will be equated with crime and international terrorism. That is, a drone will fly in and the owner of such a piece of iron will slam without trial or investigation. Now "uncivilized" peoples have almost everything the same as civilized ones. But numerically they surpass them. So, to take away their usual weapons is very profitable. And all that is profitable will be done sooner or later.

Hence the conclusion: for the police of the near future, a submachine gun is needed - it’s the police’s weapon that was well tested in the past, it started from it, which at the same time could fire with plastic bullets and shoot gas and thermobaric grenades (this is in the situation !), and conduct heavy fire at the target. So that, let’s say, the terrorists who sat outside the window couldn’t even put their nose in it, while special forces soldiers would run to this very window.

And so I thought about all this and made a mock-up, mock-up concept, nothing more, which, at least, allows me to hold on to it and evaluate the usability. And right away I’ll make a reservation so that in the comments then people don’t write any rubbish that they don’t talk about any budget money cuts and that the author is not in any “hopeless situation”. Just someone in their spare time making models tanks and knightly armor, but I prefer the models of the promising rifleman. That's all.

I will say more, this is not even a mass-size model. Because in terms of dimensions it, yes, has the dimensions of a future weapon, but the weight is still less, because not all the “stuffing” is installed in it.

So, look at the first photo. The basis of the design is a tubular truss made of plastic. Moreover, all the handles for holding it are tubular, similar to the handles of the Finnish machine gun "Valmet". There are three handles for holding: two inclined at the back and one vertical at the front. The longest lower tubular frame is used to place a telescopic stock inside it, a tube for a tactical flashlight is mounted on it, and under it there are two ring mounts for a cartridge with charges. A Picatinny metal plate with two folding mechanical sights is mounted on the upper frame, which in front goes into a L-shaped steel brass knuckles, which protects the shooter's hand if it is on the front vertical rack, which can be used, and so that the window or knock the door, or in hand-to-hand combat. On the upper frame there is also an electronic control unit for the submachine gun with a display, which displays all the parameters of the system, including ammunition consumption. There are also two trigger keys on both handles - above and below, which is also very convenient. The microchip implanted under the thumb turns on the system, so that only “our man” can shoot from such a PP. 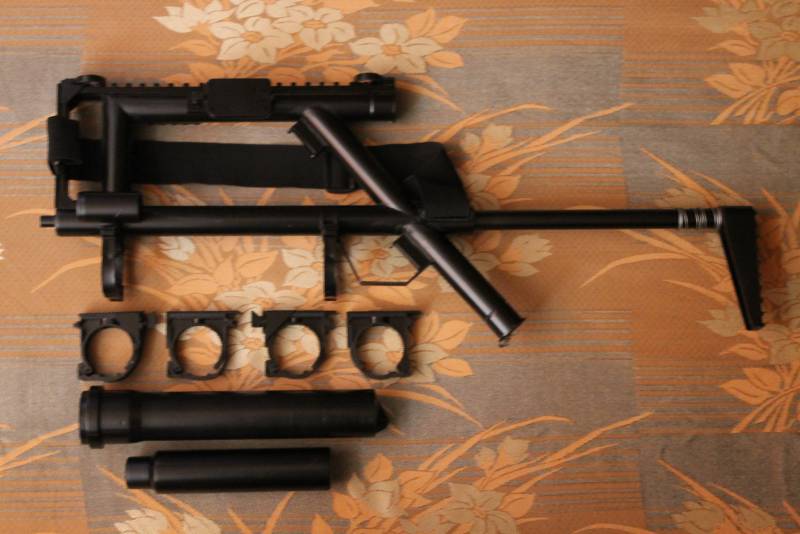 Photo 1. Submachine gun “Universal Police Weapon” with a set of components
The components include four additional mounting units for two additional cartridges that easily fit into the two main mounting units on the lower tubular frame. All cartridges have the same shape, so that they can be inserted into any of the mounting nodes, but they have different contents. For example, below shows a grenade, which can be gas, and thermobaric, and fragmentation. They can vary in color. And the grenade itself, and the cartridge with it. 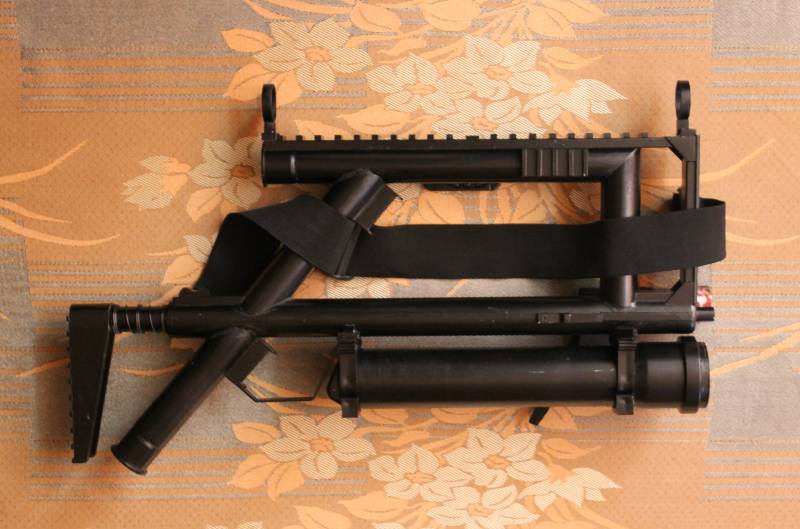 Photo 2. View of the submachine gun on the right. Here on the upper tubular guide there is another Picatinny rail, for a laser designator, and on the bottom - a mount for a blade bayonet. The photo shows how deep inside it goes the stock rod when it is folding. The spring is needed in order to facilitate the removal of the rod during removal. The batteries are one in the lower pistol grip and the other in the upper tubular guide 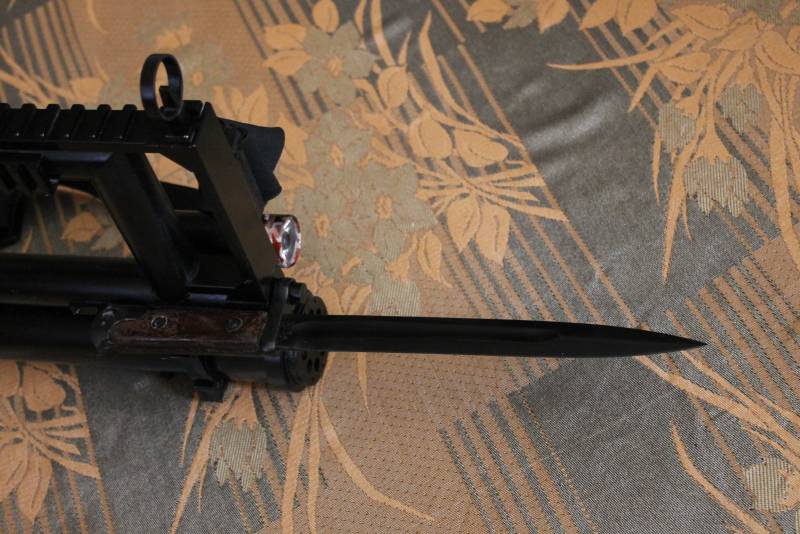 Photo 3. The standard dagger bayonet is attached to the cylindrical protrusion on the lower guide and on the latch, and it is horizontal so that it fits between the ribs without problems! 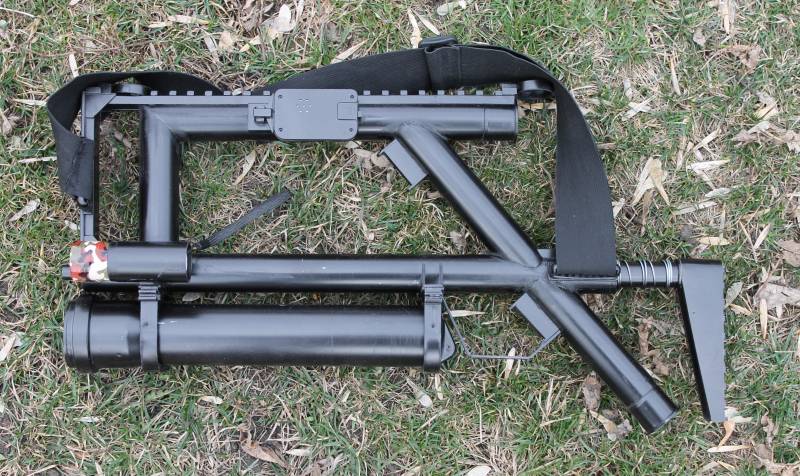 Photo 4. When assembled (basic version), along with a tactical flashlight inserted into the tube, this submachine gun looks like this. 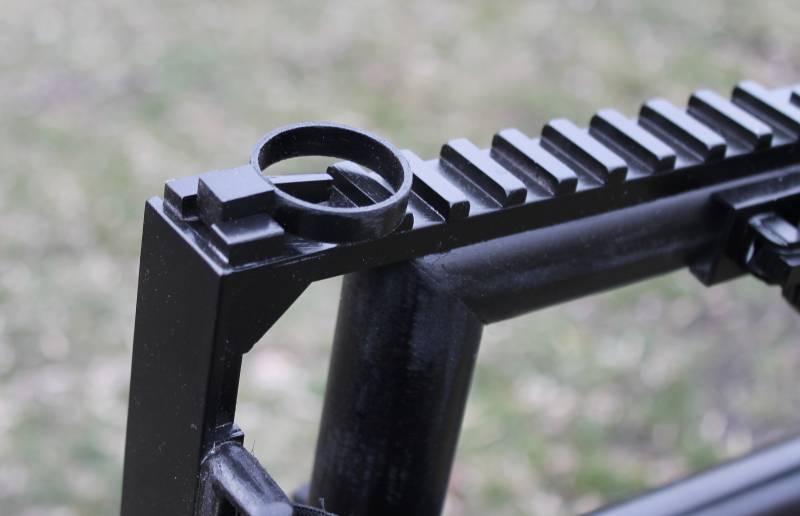 Photo 5. Sights are very simple. The front sight and hinged sight have ring fuses. The long Picatinny rail allows you to mount any additional sights
As for the device of the cartridge itself, it is based on existing developments and does not present any difficulties for release. This is a plastic cylinder, inside of which there is a block of eight barrels, each of which is designed for four shots. Trunks are rifled, but since they are, in fact, disposable, they use the cheapest metal. Inside each barrel there are four bullets that differ from the usual ones only in that steel rods pass through them, protruding from the back by 5-6 mm. At the same time, each rod abuts against the head part of the bullet located behind it. Everything is like in the well-known Metal Storm system of the Australian inventor O'Dwyer, but in this case there is a difference. There are no powder charges in the barrel! They are located in four cylindrical sleeves attached to the barrel and connected to it by a hole that goes into the back of the room. A similar method of placing a powder charge, by the way, has also already been tested in U-shaped munitions studied in the United States. But there it was about shells with a bullet. In this case, we have a slightly different design, a sleeve docked to the barrel. The barrel itself is designed for four shots, and the sleeve for one! Inside the liner, the space is divided in a ratio of 20 to 80. A ceramic-metal piston, whose thickness is slightly larger than the opening for the exit of powder gases, separates them. A microchip is attached to it - a microwave radiation receiver and two igniters. There are also two powder charges: the larger of the quick-burning powder, facing the barrel, and the smaller, in a confined space, armored, slow-burning. 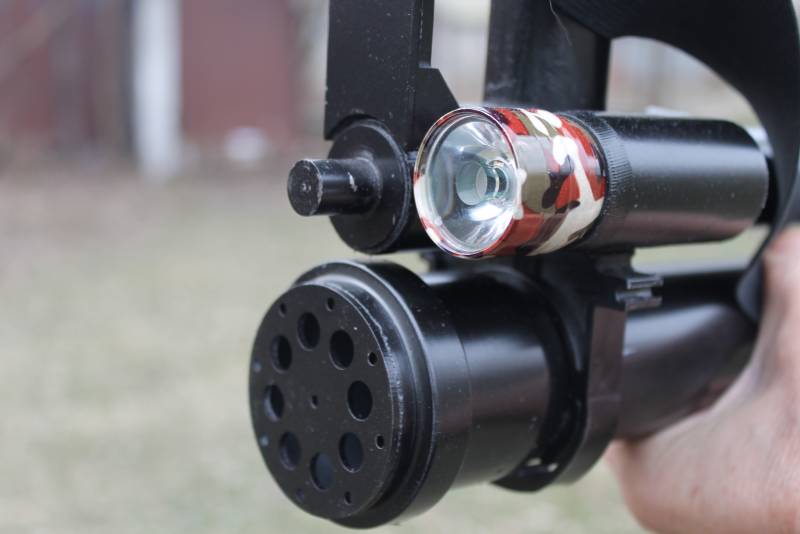 Photo 6. A submachine gun equipped with a cartridge and with a tactical flashlight. Well visible bayonet mount
The shot is as follows. When you press the shutter release button on one of the handles, the microwave generator generates a pulse that receives a microchip of one of the free bullets of one of the trunks. An electric current is generated, the igniter is triggered, but only that powder charge that has an exit to the barrel flashes immediately. At the same time, the membrane breaks through, gases fill the back of the room and push the bullet out of the barrel. Then the charge of armored gunpowder begins to burn. Gases push the piston forward and lock the liner channel. Thus, with subsequent shots, powder gases enter only the barrel, and do not fill the empty shells, creating high pressure in them, which just makes them disposable. 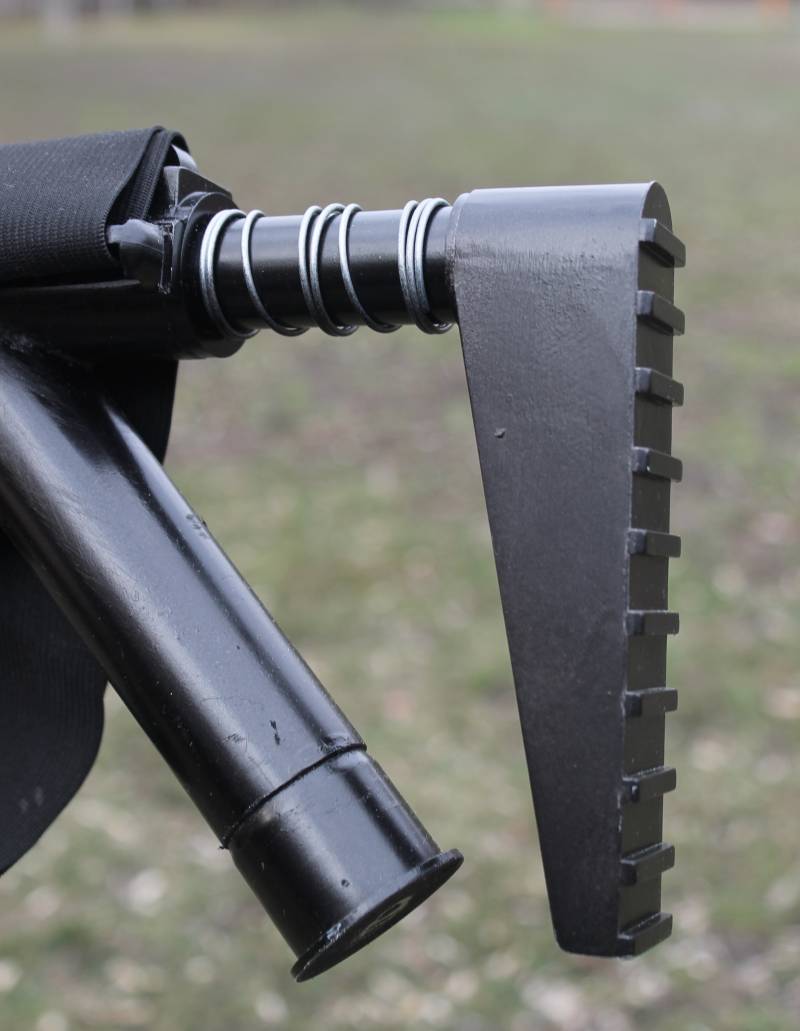 Photo 7. Folded stock and handle with screw cap for battery
Since there are holes with a diameter of 2-3 mm along the perimeter of the cartridge, the powder gases at the muzzle end create a vacuum at the time of the shot and air is pumped through the cartridge through them. Thus, the more often this submachine gun fires, the more intensively the cartridge cools. Everything is like in a Lewis machine gun. 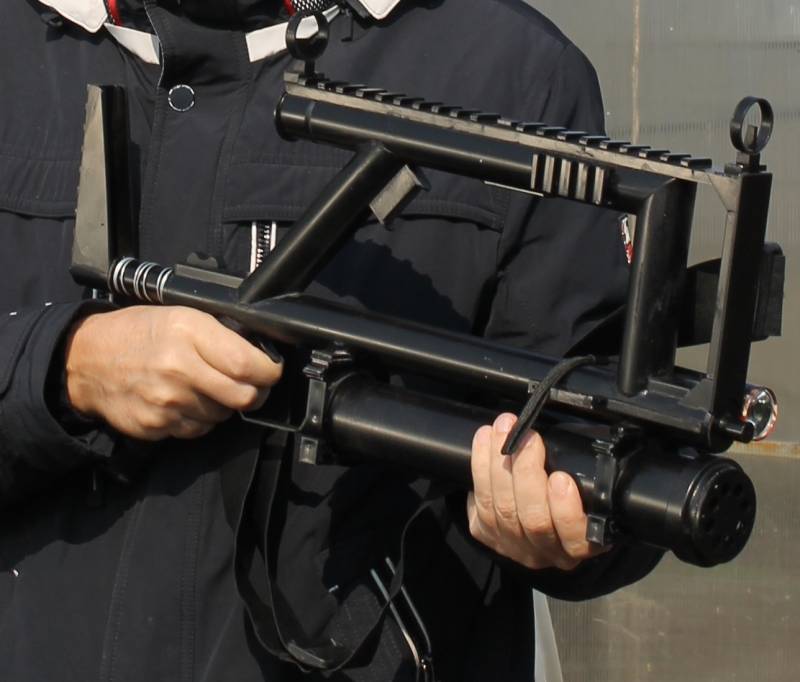 Photo 8. Holding the submachine gun with the lower grip
The design of the submachine gun was calculated on the fact that both right-handed and left-handed people could easily use it. In the latter case, the belt fastening brackets and the control unit are easily rearranged. And that’s all. This photo shows the retention of the submachine gun by the lower handle and the cylindrical body of the cartridge. The buttstock is turned up for ease of use. The M-shaped butt control button is located just above its spring and allows for five positions. Sights are raised up, for the convenience of working with weapons with different grips, but everything is designed so that at a distance of 200 m the aiming point coincides with the axis of the cartridge itself. In addition, with automatic shooting, the weapon always moves up a little.

The rate of fire of such a cartridge can be very high, because there are no moving parts in it. The number of remaining charges is displayed on the display screen. The firing range (based on the comparative characteristics of modern submachine guns) can reach 200 m on this model. Which is quite enough to solve almost any tasks that can be posed to modern police units.

We are in Yandex Zen
Top 6 pistols 2018 of the year according to "Guns To Carry"
Victory weapons. "Degtyar Infantry" - machine gun DP 85 years
221 comment
Information
Dear reader, to leave comments on the publication, you must to register.