What can replace the usual Kalashnikov: about the prospects of small arms 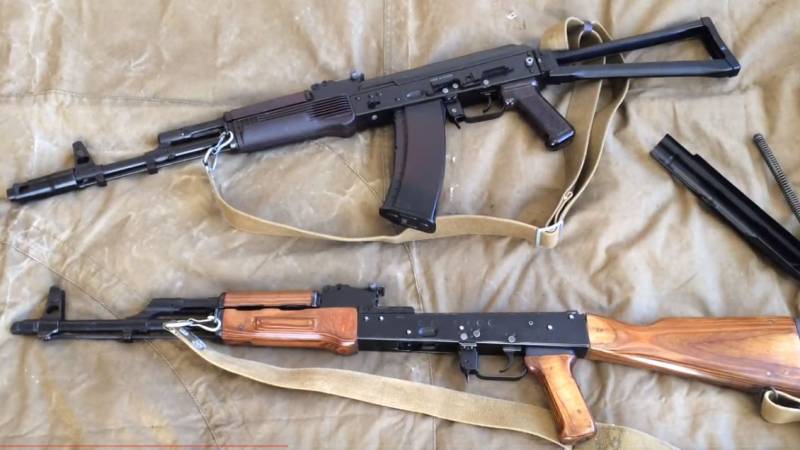 After the release of material about future tanks, many readers got the impression that the author specifically avoids much more important forecasts. In particular, from the discussion of the prospects for the development of small arms. In some part, I agree with this opinion.


Just because predicting the development of this type of weaponry in the presence of a huge number of scientific discoveries, changes in battle tactics and many other factors is an ungrateful task. And forecasts in this case will almost always correspond to reality only partially. And even they will remain only reflections of the science fiction writer.

What are the forecasts based on?

To understand the logic of my reasoning, you need to master the initial data. Foundation, if you like. Moreover, today the author is not a “physicist”, but a “lyricist”. Free from any scientific discoveries, inventions or breakthrough technologies. The future is born today. So I will proceed from the goals and objectives of the army, which are already set, although sometimes they are not officially announced.

If you add up all the factors that are known to most readers, the situation will become quite understandable and predictable. Although it is possible that I did not notice any of the trends. The points.

Firstly, in the world there is a situation where rich countries consume the lion's share of world GDP, and poor get crumbs from the master's table. This in itself is unfair. This means that citizens of poor countries will strive to improve their own lives. And this is possible only in one case. In case the rich give up part of their wealth. Agree, there are few such altruists among the rich.

Secondly, the paradox of the young. It is in poor countries that the population is many times younger. From a military point of view, poor countries have a much greater human resource for warfare. The average age of residents of developed countries, on the contrary, is constantly increasing.

Thirdly, the development of computer technology. Agree, today these technologies have become so commonplace that a smartphone or other electronic “miracle” can be found in the most unexpected places. And the appearance of leading companies manufacturing these devices in more recently technologically backward states suggests that the population of these countries is not inferior to the "rich" in computer literacy.

The rich want to fight in the distance

What is happening in the world today is just a modern version of the old tactics of mankind. The poor are trying to take from the rich their treasures by force weapons. The rich are not going to become poorer and, conversely, are robbing and so not distinguished by the luxury of the "home" of the poor.

Moreover, it is the “rich” who create terrorists from the most radical “fighters for justice”, and then they spend tremendous efforts to destroy them. History The life of the most famous terrorists is a confirmation of this.

At the present stage, when military conflicts break out here and there, a certain layer of professional soldiers has already appeared. You can call them anything you like, but these are people whose most of their lives are spent in war. And now they are able to withstand the most trained army units. Including the army units of rich countries.

If you add together all the factors listed above, it becomes clear why today a lot of attention is paid to drones, drones. Why is the appearance on the battlefield of a soldier a rare occurrence. A battle with small arms most often looks like shooting ammunition in the air. Suffice it to say that the number of personnel incapacitated by small arms fire and artillery fire, in particular mortars, is simply not comparable.

What small arms do soldiers need?

Consider a modern battle, examples of which can be seen in Ukraine or in Syria. How to quickly and effectively cool the ardor of the enemy? How to prevent a targeted attack?

So, the enemy concentrated the unit for attack or reconnaissance in battle. UAV scouts transmit the coordinates of the target. Then comes the “reassurance” of the enemy’s activity with the help of large-caliber weapons. At a distance of 1,5-2 km. Snipers and machine gunners almost always successfully cope with this task. The attack of the enemy is choking, almost starting.

But suppose the enemy commander did not understand the warning and led the fighters into the attack. What happens next? Then artillery comes into play. Most often, units are turned into cabbage by mortars. At the same time, as you see, the infantry itself is conditionally involved. Of course, you can shoot at random. At a range of a kilometer, firing from an automatic machine gun or machine gun is ineffective.

Thus, in modern combat, the machine gun turns into a melee weapon. You can actually use it only when the enemy gets close enough to the position. And this is possible in only two cases.

If a massive attack began immediately on the entire front of the defense, both snipers and mortars simply do not have time to quickly respond to an enemy attack or are subjected to artillery attack themselves. Or there is a DRG, which managed to approach the positions unnoticed.

Thus, small arms today can be considered as two components. Large-caliber sniper weapons with an aiming range of 2 km or more and automatic melee weapons, designed to create the necessary density of fire in conditions when the enemy is in close proximity.

Such weapons are already used quite often today. The dispute between opponents and supporters of this weapon was resolved by life itself. In the conditions of battle, in the absence of industrially produced samples, fighters use any “improvised materials” to have such weapons. Therefore, the caliber of such "sniper rifles" can be from the standard 12,7 mm to 23 mm and above.

Creating such rifles is not a problem today. The gunsmiths have accumulated not only great experience in the design of such weapons, but also possess the necessary production technologies. The problem is different. In the human factor.

Very often, due to the stupidities of the movie, snipers are perceived simply as excellent shooters. In fact, training a soldier to shoot well is not a problem. There are no completely “wooden” people. Sniper is another. This is a virtuoso musician. Shooter-Paganini, if you like.

He doesn’t just "feel" his weapon. He takes into account millions of factors known only to him. From the direction of the wind and atmospheric pressure to the temperature of the barrel and the weight of the bullet in a particular cartridge ... And at the same time, each sniper has his own "cemetery".

If you really create a rifle, then even with a perfectly trained sniper, the probability of hitting a target is quite low. The bullet flies too long. The goal during this time can simply move, and that’s it. And the process of aiming at such a distance is not a quick event.

Conclusion. It is necessary to create sniper systems. Keep human participation in the shooting process to a minimum. The target-drone-complex-man-target scheme. When the drone finds a target, tells the complex the parameters, the weapon makes the necessary calculations and waits for a command from the person to destroy. Ideally, a voice command. Just "fire." Or "shoot them all" ...

What can replace the usual Kalashnikov?

I will make a reservation right away, we will talk about replacement without taking into account the requirements of the main consumers of automatic weapons, without the forces of special operations. simply because MTR is impossible to equip with the same weapon. Because the fulfillment of a certain task requires certain means. A soldier cannot carry everything on himself.

The weapon should be light, simple, with an acceptable 600-800 meters, aiming range of a direct shot, large ammunition, providing the required fire density, possibly silent. Ideally, the machine should be an individual weapon. Simply put, the adversary should not use it.

Theoretically, with a slight stretch, most assault rifles and assault rifles meet these requirements today. This is proved by the very military conflicts that exist today. For example, disputes about which automatic is better: AK-47 or AK-74 do not cease here.

But modern weapons have one drawback that needs to be eliminated. With an increase in the rate of fire of weapons to 1000 rounds per minute, the effectiveness of the weapon decreases sharply. And the ammunition consumption is huge. At a lower rate of fire (600 rds / min) there is no fire density.

In my personal opinion, the machine of the future will be at least double-barreled. That is, there will be one mechanism, but it should work immediately with two bullets. Thus, even with a rate of fire of 500 rds / min, the desired density will be provided in a shorter time. A standard shot of 2-3 rounds will already consist of 4-6. A technical solution with an increase in the return of weapons has already been found by the same Kalashnikov concern.

More revolutionary solutions are also possible. Like the use of other ammunition. Up to the square section of the barrel and the square bullet. There are such developments. And quite successful. Like the traditional "round" with the stabilization mechanism in flight.

In any case, the search for a universal solution to the problem of automatic weapons must continue. But this must be done in conjunction with other tasks. It is necessary to take into account, for example, the development of soldier protection systems.

What to think about

It was not in vain that I paid so much attention at the beginning of the material to issues of geopolitics. The problem of rich and poor countries will not disappear for a long time. So, you should not rely on the mind of humanity and understanding of all the horrors of war. The confrontation between the poor and the rich will continue.

This means that more and more centers of conflict will appear in the world. So there will be blood. There will be innocent deaths. And the need to arm our own army will continue. Arms are the latest, capable of protecting not only from known weapons, but also from promising types of weapons.

I do not believe that rich countries will go to an open war among themselves. In this case, the world will pay too much for its stupidity. More precisely, the probability of saving planet Earth in the event of a major war is close to zero. But we still have to fight. Locally. Using conventional weapons.

So the topic of developing new weapons has been, is and will be relevant for a long time to come.

We are in Yandex Zen
About Stalin and Khrushchev
What you didn't want to know about England
75 comments
Information
Dear reader, to leave comments on the publication, you must to register.