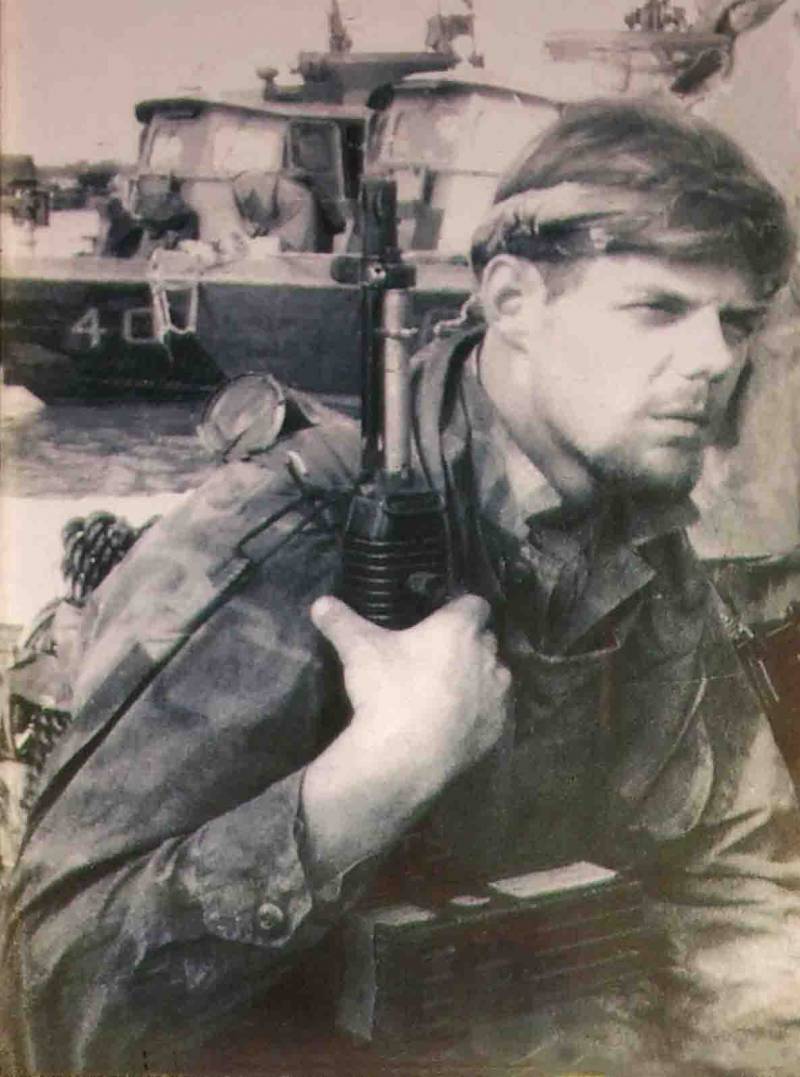 In March 1962, SEAL special forces units (seals) were sent to South Vietnam as military advisers, as well as for hydrographic support. However, a year later, the CIA began using SEAL fighters in its covert operations. For example, they carried out reconnaissance, landing and sabotage operations. And also shared their experience with the soldiers of the Armed Forces of South Vietnam.

The author managed to find several photos in an article related to this topic in The Coronado Times. It should be noted that Coronado (Coronado, California, USA) is the name of the city, next to which is located the same name base of the Navy. The 1st Separate SEAL Regiment is deployed at the base.

The article is dedicated to a military doctor named Greg McPartlin. He served on SEAL, a veteran of the Vietnam War, and author of Combat Corpsman. The book describes operations around the world in which he managed to participate. For example, Greg McPartlin performed a mission in the landing area of ​​the lunar module of the Apollo 11 spacecraft. According to the official version, there were astronauts on the moon in the module. Much later, Greg was a military consultant during the filming of Pearl Harbor. And about Vietnam in his book there is such a phrase: "A lot of tags and bags ..." 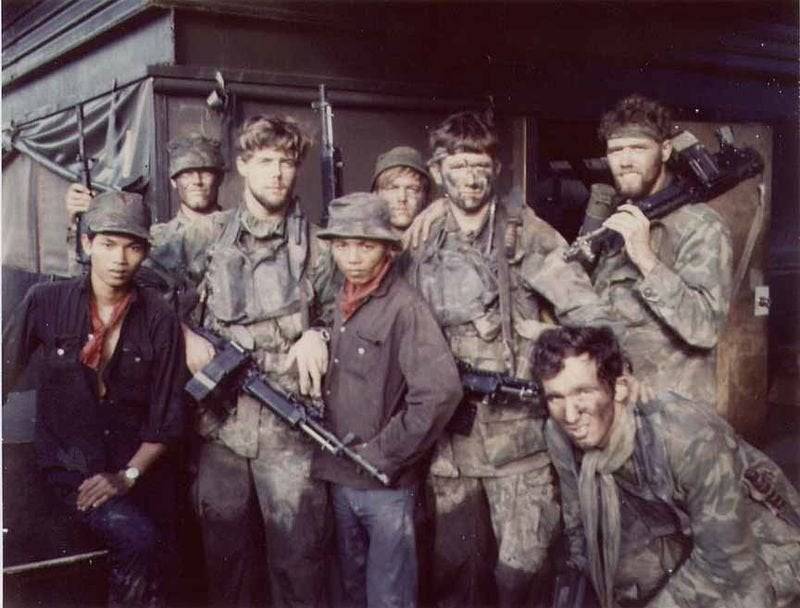 All "seals" are armed with various configurations of the Stoner 63. On the shoulder of the fighter on the right is a machine gun with a disconnected butt. Photo: “The Coronado Times” 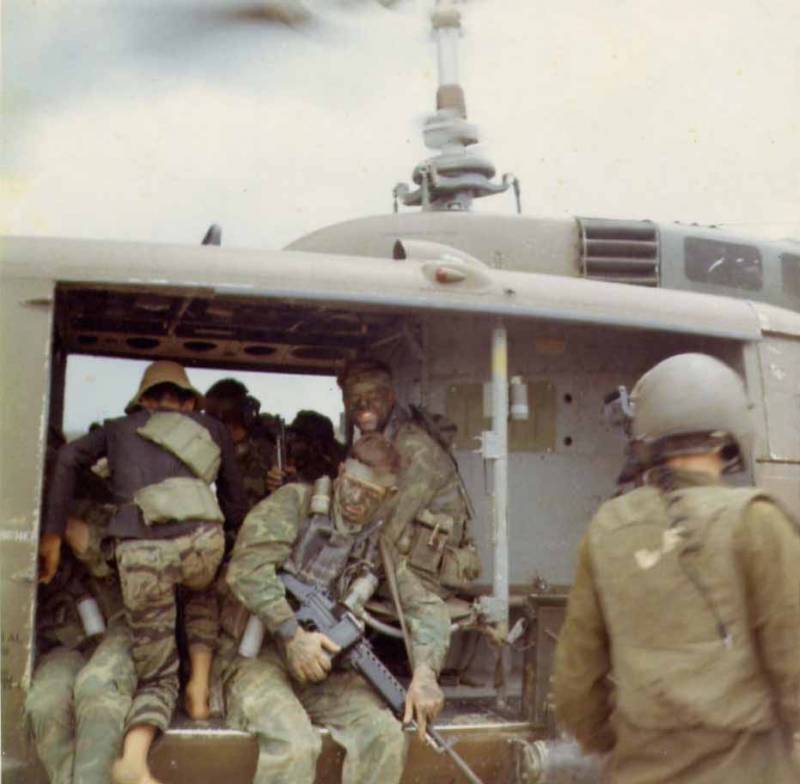 Greg McPartlin with a Stoner 63 machine gun in his hands. Vietnam, 1968-1969. Photo: “The Coronado Times”
The young man Greg MacPartlin joined the Navy and became a nurse. He was assigned to the 3rd Deep Intelligence Company (3rd FORECON). In 1968, his unit was sent to Vietnam, just in time for the beginning of the Tet offensive by the Vietnamese communists.

Returning from the first "business trip", Greg was sent to the diving school of the US Navy (Key West, Florida). Upon completion of training, he was appointed to the SEAL team, a platoon of Alfa, and was assigned to the Coronado base. Our orderly went through the entire training course along with special forces soldiers. The only test he was freed from was Hell Week. Soon he went to Vietnam for the second time.

Thus, the paramedic became a fighter of an elite unit. And during the patrol, he took with him not only a first-aid kit with medicines, but also a machine gun with a tape feed. Greg McPartlin recalled that he loved his Stoner. Weight weapons was relatively small, he scribbled regularly, and the return was almost not felt.

It is well known that much is permitted to soldiers in war. For example, to fight with captured weapons. Or use enemy equipment. The main thing is that the soldier complete the task. So it was during the Vietnam War. American soldiers went into battle with captured AK and RPD, with pleasure carried trophy "unloading", finalized their full-time weapons, etc. Pay attention to the photo below. 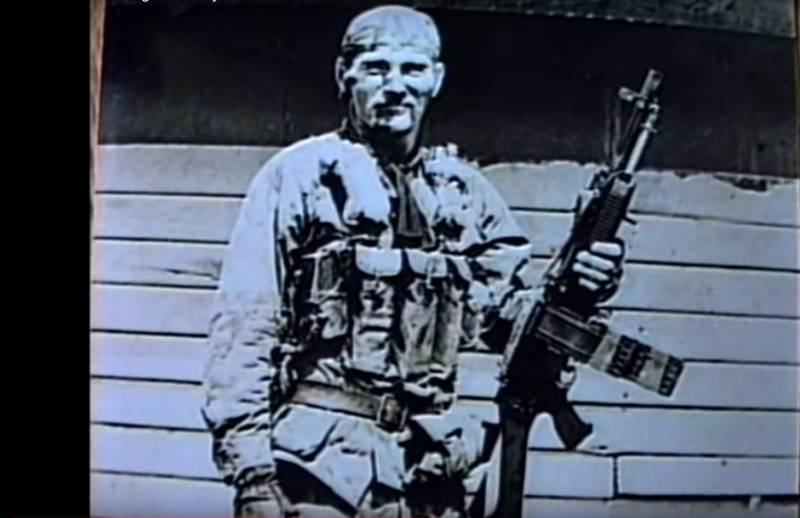 A fighter with automatic weapons in his hands. Pay attention to the home-made pair and barrel length. Frame from the documentary chronicle of the Vietnam War

In the photo we see a fighter in a discharge vest. It is believed that this is a captured “bib” Type 56 (or 58) Chinese-made. The so-called Chi-Kom (Chinese Communist), which is designed to carry 3 stores for AK and hand grenades.

Also pay attention to the weapon in the hands of the fighter. The gas pipe is located below, but this is not an RPD. The shape of the fore-end, butt and handle indicate that this is clearly a Stoner system. You already know that the barrel above the gas pipe was mounted on light machine guns with magazine and tape power. The reloading handle under the fore-end is an additional confirmation of this. But Stoner's store-fed machine gun is similar to the Bren. It turns out that in front of us is a Stoner machine gun with tape power. Again, pay attention to the unusual form of home-made pair. These are 2 cartridge boxes connected together under the letter “G”. 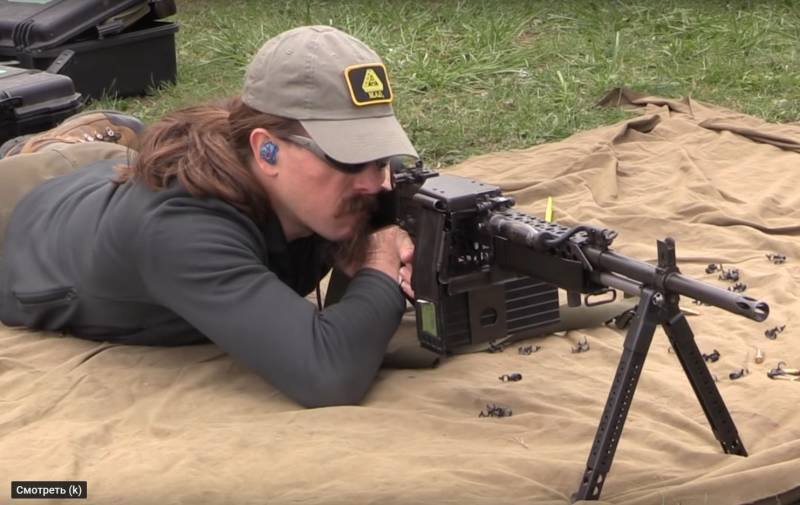 Stoner machine gun with tape power. Power comes from a standard cartridge box. Photo: Forgotten Weapons
The standard box contains 100-round tape. In Vietnam, the side wall of the main box was cut out and an additional one was attached to it. As a result of their combination, the machine gunner received an ammunition box of increased capacity, with a tape for 180-200 rounds.

I also ask you to pay attention (previous photo) to the lack of bipods standard for the machine gun, as well as the barrel length. This is the shortest Commando machine gun barrel. Apparently, the hero of Vietnam was more convenient to get through the jungle with a short-barreled machine gun, but with a cartridge box of increased capacity.

The US Marines also adapted for their Stoners round round cartridges from the Degtyarev light machine gun (RPD). They were so popular among the fighters that the manufacturer soon offered on the basis of the RPD box their own development for 5,56 × 45 cartridges and with mounts suitable for the Stoner system. She held the tape for 150 rounds. Perhaps the prototypes were cartridge boxes for machine guns modernized in Holland, which were tested in the United States under the designation XM207.

Stoner machine gun with tape power and round cartridge box. There is an ammunition box (M2A1) holding 800 rounds of 5,56 × 45 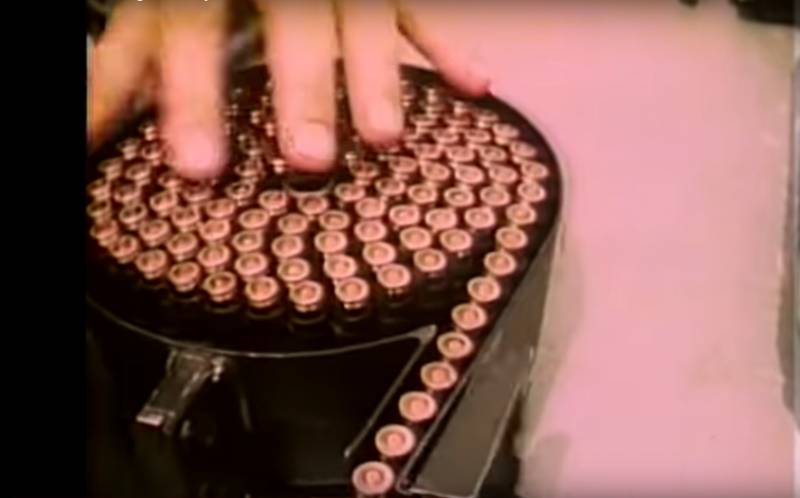 An open cartridge box with a stacked ribbon of 150 rounds. Frame from the documentary chronicle of the Vietnam War

It is believed that Eugene Stoner developed the Stoner 63 complex, using the experience gained while working on the M16 rifle, not just to improve it, but to replace it in the army.

Relying on an improved system design, on the ability to configure one or another type of small arms from the modules, the designer planned that the Stoner 63 would serve to replace not only the M16 itself, but also the M1 Garand, M14 rifles, as well as the Browning M1918 machine guns (BAR) and M60. According to the designer's idea, a high degree of unification of units and assemblies would greatly facilitate all stages: from production and logistics to its maintenance and application. And from an economic point of view, unification also promised certain benefits.

Despite the seemingly obvious advantages of the Stoner 63 system and the numerous laudations of the fighters from Vietnam, the modular weapon system of the Stoner system did not meet the designer's expectations.

Yes, it was limitedly used in real combat conditions during the Vietnam conflict by US Navy special forces (SEAL) and Marine Corps. Yes, after a detailed study of the operation of the mechanisms, the individual "fit" of each sample, as well as the use of better cartridges, the fighters made sure that they received excellent weapons. After successful trials in Vietnam, the Stoner 63 pilot batch also received US ground forces. A scanty number of complexes arrived and US law enforcement. According to unconfirmed reports, a small amount of Stoner 63 was used during the US military operation to invade Grenada (1983).

The only unit that continued to use this weapon was the US Navy Special Forces (SEAL). To solve their problems, “seals” chose a tape machine gun. But they were not happy with the length of the barrel. Specially for SEAL, a shortened machine gun barrel was developed. The new version of the machine gun (63A1) received the designation "Commando", under the index "Mk 23 Mod 0" the weapon was adopted by the US Navy. The Stoner machine gun in the Commando configuration was used by the US Navy special forces until the end of the 80s. At that time, rearmament took place, and the Stoner 63 was replaced by the M249 SAW light machine gun (version FN Minimi). The remaining machine guns of the Stoner system were disposed of.

We started talking about the acquisition. Depending on the condition and configuration, the cost of the Stoner 63 complex is estimated at between $ 35,000 - $ 75,000. So, at a well-known online auction, the Stoner 63 machine gun with a tape power was sold for $ 69 thousand.

The history of one auction lot

This item was an “item with history". We are talking about the Stoner 63 complex in the "assault rifle" configuration with serial number 001461.

By the way, Stoner 63 is one of the rarest and most valuable items of the Vietnam War, which are available for private collecting. The National Firearms act registry only lists a few original Stoner from Cadillac Gage, and this item is one of them.

Thanks to the examination carried out before bidding, the path of the rifle 54 years long became known. It was found that this product was manufactured on 18.11.1965/12.01.1966/30.08.1966, and on 05.05.1968/XNUMX/XNUMX was sent to the warehouse of the Marine Corps. The manufacturer (Cadillac Gage) received it back on XNUMX/XNUMX/XNUMX. The weapons were stored in the manufacturer’s warehouse for about two years, and then (XNUMX/XNUMX/XNUMX) the rifle was transferred to the police department of Saint Clair Shores, Michigan. Some time later, Dr. Leon Mitchell from Massachusetts became the owner of the weapon, and then Ralph Merrill from Utah.

In total, in August 1966, the US ILC returned 286 Stoner 63 units to the manufacturer. Almost all of them were disposed of, and very few of them were preserved due to the fact that they were transferred to law enforcement agencies in the states of Michigan, California and New York. The rifle with serial number 001461 is the only one that was sent to the St. Clare Shores Police Department. 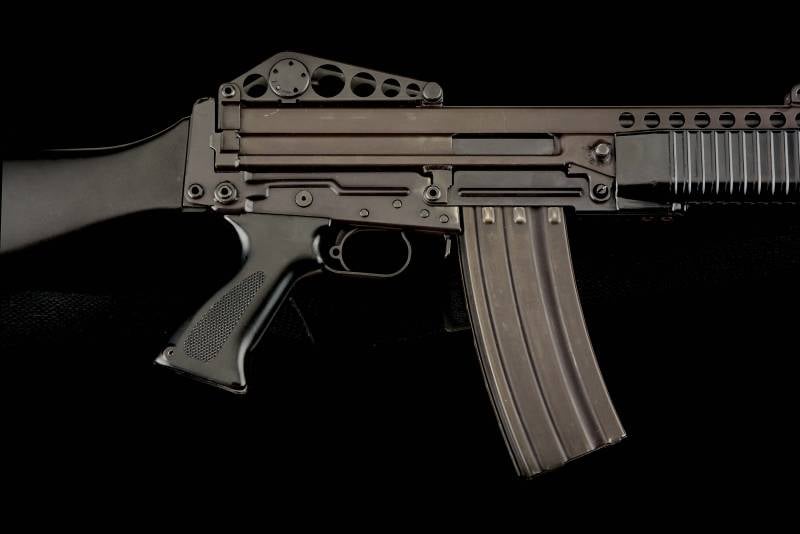 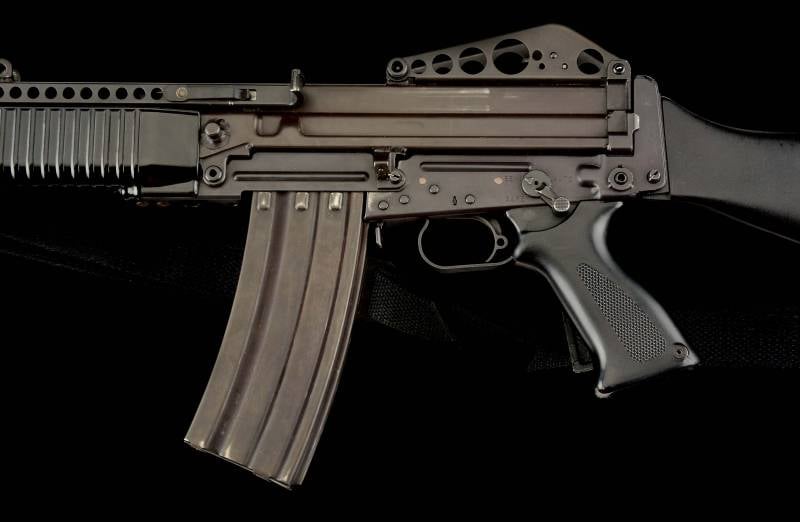 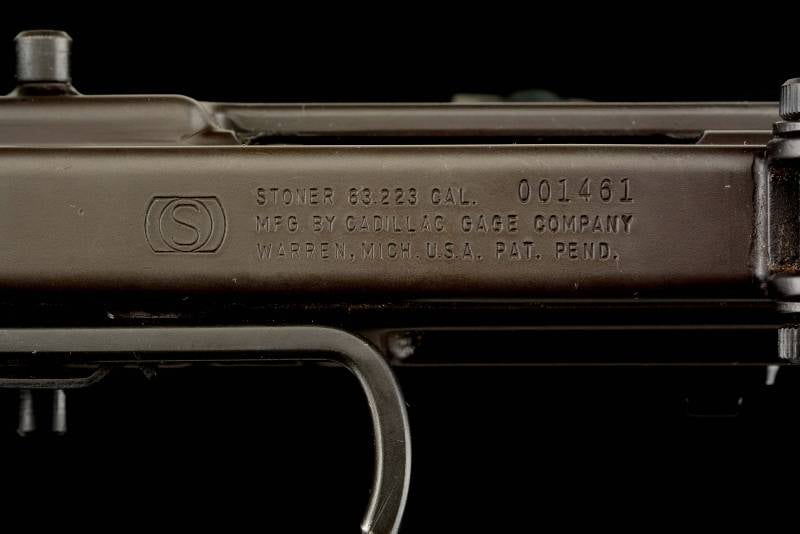 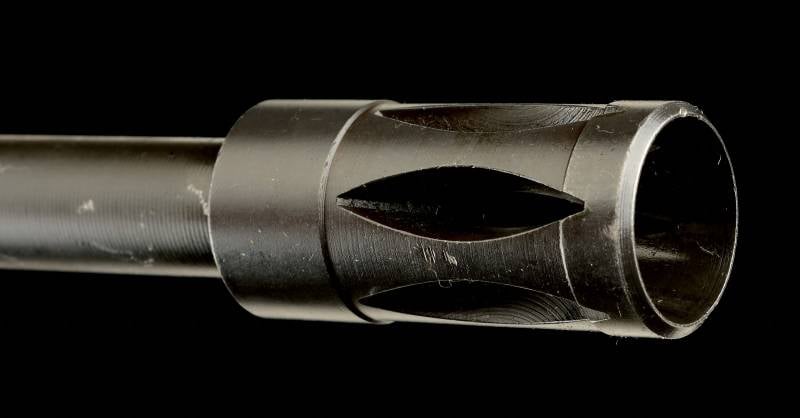 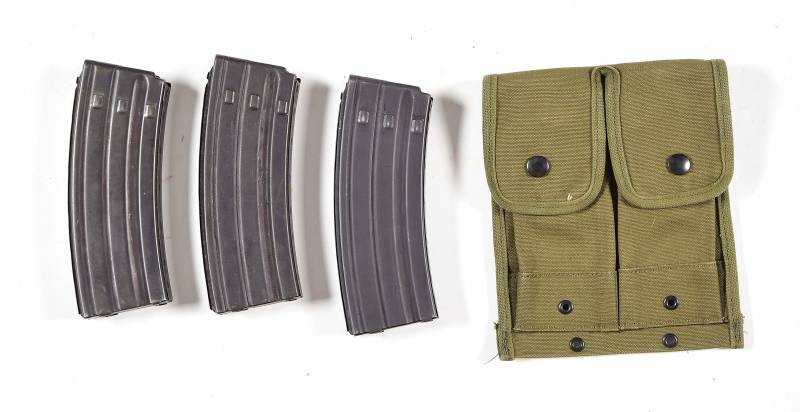 In total, Cadillac Gage released no more than 4 thousand copies of Stoner 63 of all configurations and modifications. Of these, 170 slide boxes were produced at the Costa Mesa plant (California). Serial numbers from one to 000230 were used, and the range 00040-00100 was never applied. At the plant in Warren (Michigan), the bolt boxes began to be marked, starting with the number 000231. It was not possible to obtain data on all numbers.

Why didn’t such a successful complex receive proper distribution? Since the days of ancient Rome, nothing has changed: "Look for who benefits from it." Find the names of the corporations that for several decades produced M16 rifles and M60 machine guns and filled them half the world. Perhaps this will be the answer to the question.

Stoner 63A system in the cinema 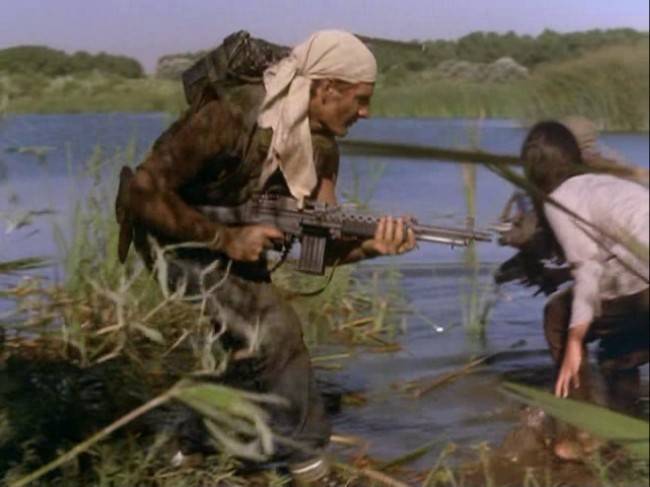 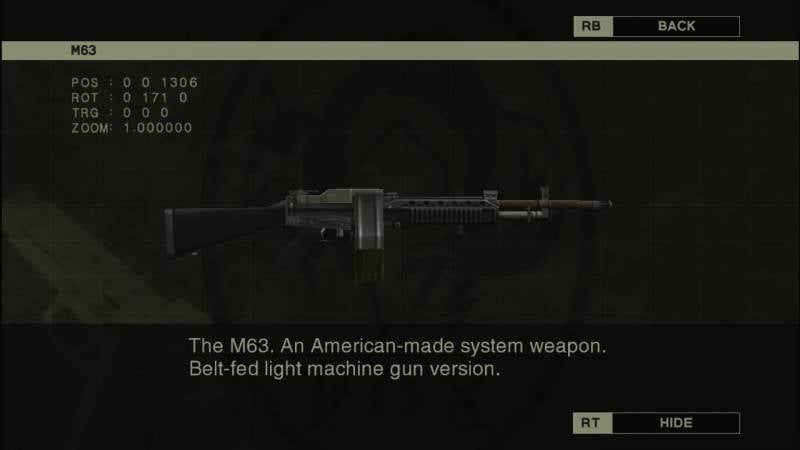 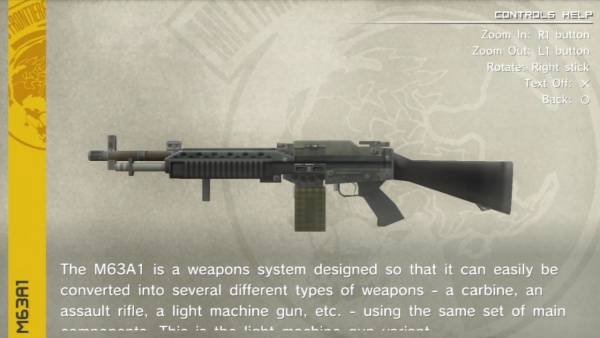 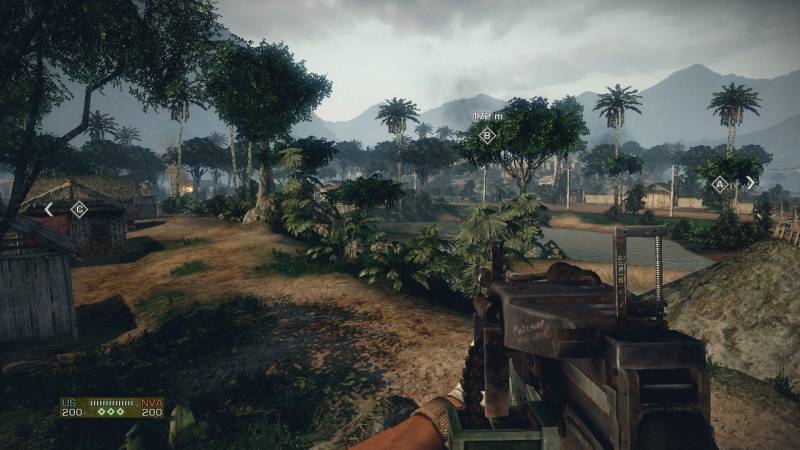 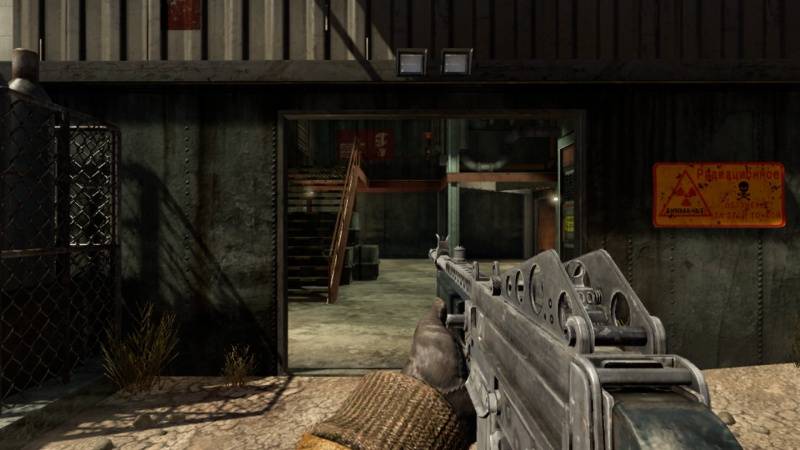 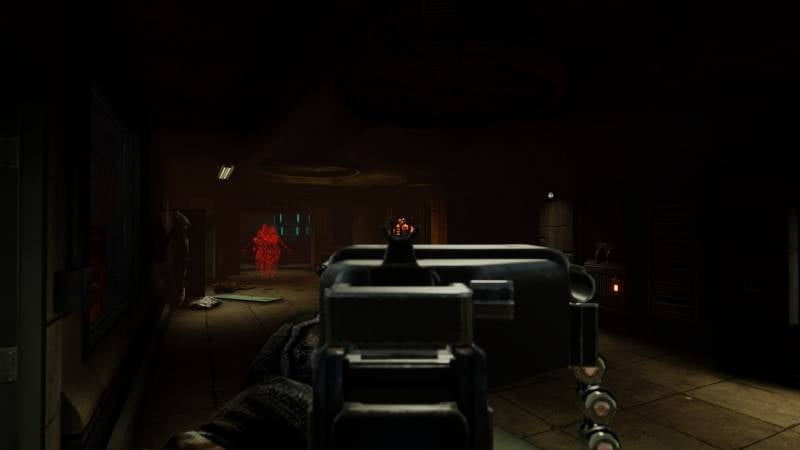 G&P Industrial (Hong Kong) has developed and is producing a replica of the Stoner system in the airsoft version for airsoft games. G&P opted for the 63A1 in a “belt powered machine gun” configuration. The model has received the designation G&P M63A1 Tactical Rail Version. 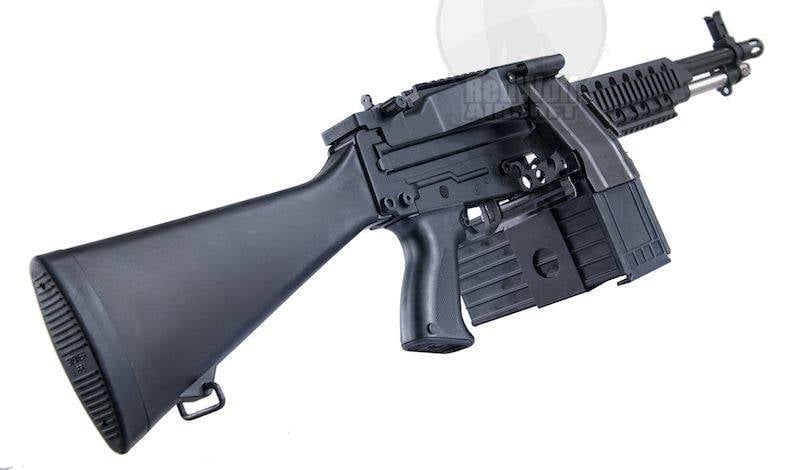 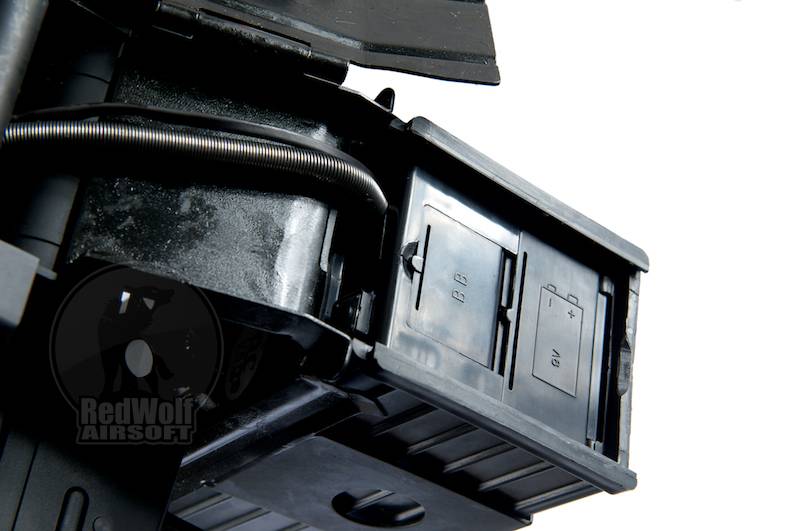 In the next part, you will learn about some weapons that are a development of the 1963 Stoner system.

We are in Yandex Zen
Stoner 63: development. Model 86 and 96
Stoner 63: Survival Carabiner and Bullpup Rifle
101 comment
Information
Dear reader, to leave comments on the publication, you must to register.