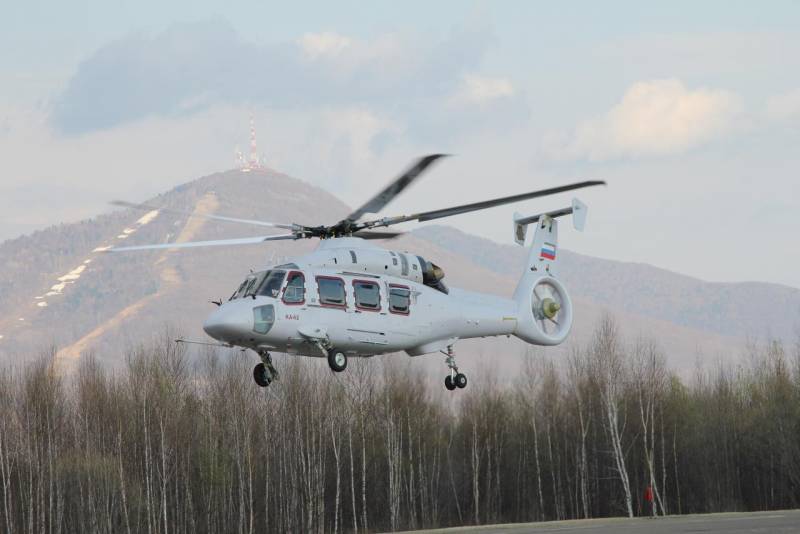 Most important news for the Russian aircraft industry in the beginning of spring, we can assume that Arsenievskaya aviation Progress company named after N.I. Sazykina began the construction of Ka-62 helicopters, launching production of six pilot batch vehicles.

“The construction of an experimental batch of six Ka-62 helicopters has begun, two of which are planned to be transferred for intra-regional transportation. Their delivery is scheduled for 2021 ”,
- said Managing Director of Progress Yuri Denisenko.

We will not go into everything technically now innovations cars. Let's talk about something else. In theory, this news should cause undisguised enthusiasm for fans of Russian aviation: after all, this is a relatively new helicopter, which is not another variation on the theme of the “immortal” Mi-8 or something else that was previously mass-produced in the years of the USSR. However, almost every aviation enthusiast will immediately see the pitfalls. And there are too many of them to simply go into the sea without getting hurt, figuratively speaking. 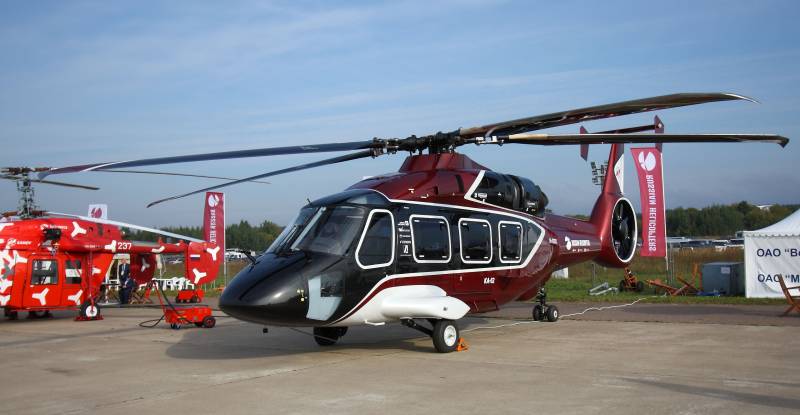 To begin with, it is worth saying that the Ka-62 is only a conditionally Russian development. The helicopter surprisingly reborn twice: at first it was the Ka-60 - a military multi-purpose machine, which they began to create in Kamov back in 1984. He became the first "Kamov" helicopter, made according to a single-rotor scheme with a four-bladed main rotor and an eleven-bladed steering. What happened next is easy to remember. Perestroika, publicity, the collapse of the USSR. The difficulties of the 90s, in which the new car was no longer found. The result - two built helicopters for the whole time, although the first flight of the Ka-60 completed in the distant 1998. 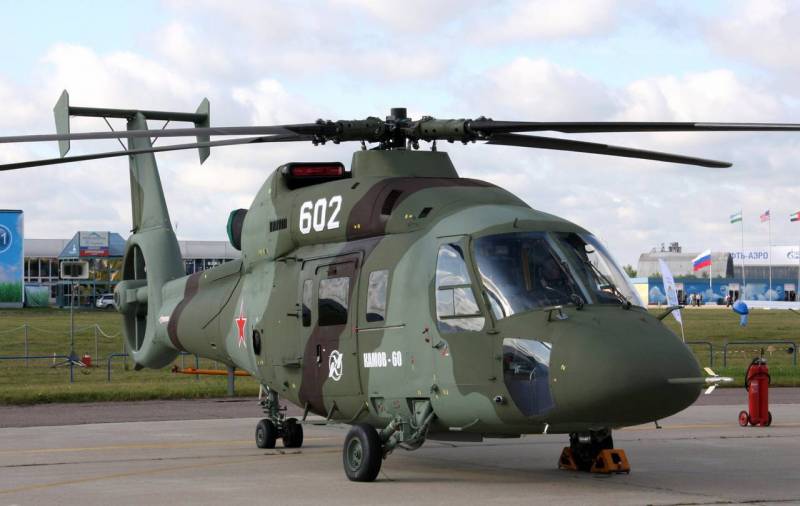 The Ka-62 is nothing more than a civilian version of the 60th. He first flew into the sky in 2016: the new version is distinguished by the widespread use of imported components. In general, import substitution is clearly not about the Ka-62, and the requirements of the civil aviation market are very different from the requirements of the military helicopter market: at least in terms of economy. If on the Ka-60 there were two domestic RD-600 turboshaft engines, then the Ka-62 received the French Ardiden 3G with plans in the future to replace it with something Russian. And this already makes the project more closely related to the MS-21 airliner, which they also threaten to equip PD-14.

Actually, this aspect has been paid attention to more than once. So, a teacher at the Zhukovsky Air Force Academy, Yevgeny Matveev, previously stated that the Ka-62 uses an unreasonably large number of foreign-made components to the detriment of domestic components.

However, here you need to stand up for the creators. As world practice (Boeing, Airbus, Embraer) shows, a successful aviation project should not be based on the principle of concern for domestic manufacturers, but on expediency. Roughly speaking, if Western engines are more economical, then you need to take them. And vice versa. You also need to understand that in the case of the Ka-62, it is impossible to switch to purely Russian components in principle. 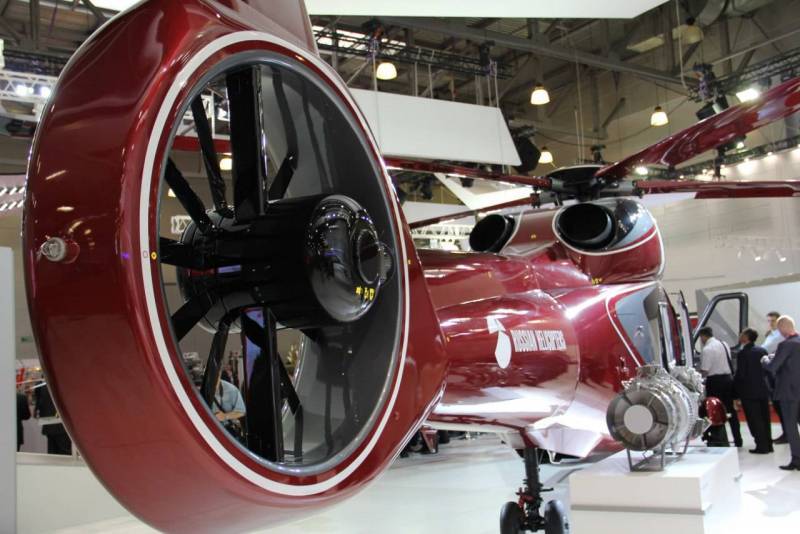 Using foreign components is a perfectly normal practice, even for titans such as China or the United States. The same Chinese airliner Comac C919, the main hope of China's aircraft industry, was supplied with Western CFM International LEAP, and the American Boeing 787 Dreamliner can be equipped with British Rolls-Royce Trent.

In general, the main characteristics of the Ka-62 is quite in the spirit of its time. The maximum take-off weight of the machine is 6,5 tons. The car can carry up to fifteen passengers. The helicopter is capable of speeds up to 308 kilometers per hour and can fly to a distance of 770 kilometers.

It would seem that there is a project, and it is potentially in demand. There are even several built and even flying samples. But, apparently, someone thought that this would not be enough, and decided that the Ka-62 could ... again be made a military helicopter.

“We have the look of a Ka-62 military helicopter. But we have not yet begun the tests. The first task: just get a certificate for a civilian helicopter. We are simultaneously working on the military appearance of this helicopter, we are discussing with the Ministry of Defense, as a first approximation, their needs, the missions (helicopters) that are needed, ”
- said in 2018 the CEO of the Russian Helicopters holding Andrey Boginsky.

That is, at first the Ka-60 was transformed from a military helicopter into a civilian Ka-62, and now directly see the Ka-62 not only civilian, but also military. This is despite the fact that, as we said above, there can be almost nothing in common between the requirements of the civilian market and the Ministry of Defense, so in fact it may be easier to create a new helicopter. 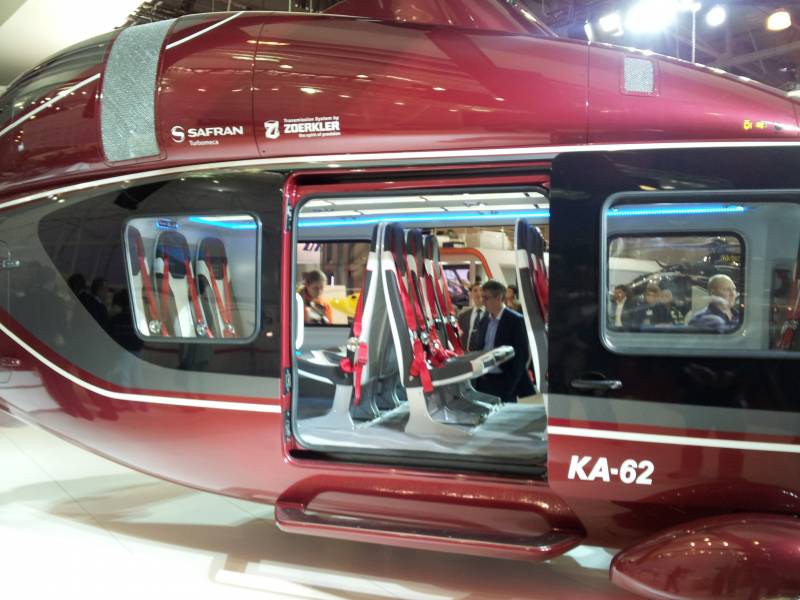 Do not forget that the Russian army has already begun purchasing the Mi-38T transport and assault helicopter and will not refuse this aircraft, as far as one can judge. By the way, in February, the first serial civilian Mi-38 helicopter was handed over to the customer, but this is a slightly different topic for discussion.

Flying in a dream and in reality

One thing is obvious: without export supplies, the Ka-62 project does not make practical sense. In general, no developed country in the world will create helicopters "for themselves": it is too expensive and complicated.

Could the Ka-62 be in demand on the world market? Yes and no. As the Military-Industrial Courier wrote in 2013, they wanted to put the first Ka-62 in Brazil in 2015.

“We also plan to come here with a new product, that is, the Ka-62 helicopter. We signed the contract while it is soft. But in the near future we will sign a “firm” contract for the supply of the first batch of seven Ka-62 helicopters, ”
- declared then in "Helicopters of Russia".

Since then, there has been almost no information on the contract, just as there is no data on new agreements.

In general, the situation on the aviation market is almost impossible to predict, even if the inappropriate bravado characteristic of post-Soviet aircraft manufacturers is removed. Who, for example, could have suggested a couple of years ago that in January 2020, due to its mistakes with the 737 Max model (worth mentioning, very monstrous by modern standards), for the first time in almost 60 years, it will not receive a single order?

In the case of the Ka-62 (its hypothetical military version can also be attributed to it), the situation looks even more complicated, because the helicopter has yet to be brought to the market and “untwisted”. At the same time, he proved that he is better than the same European AgustaWestland AW139, which, unfortunately for the Ka-62, has already been built with a series of more than 700 cars and managed to win back a substantial part of the relatively narrow market.

The problem is also that in Europe and the USA they are actively working on fundamentally new and potentially revolutionary high-speed helicopters. What does the Airbus Racer project or the American FARA contest cost? That is, there is a risk of obsolescence of classic rotorcraft, although high-speed helicopters only have to prove that they are economically more profitable than their trusted counterparts.

We are in Yandex Zen
An-12 in Afghanistan
MiG-21 in Afghanistan
45 comments
Information
Dear reader, to leave comments on the publication, you must to register.