Hypersound of the empire of the sun: Japan will fight with Russia and the USA

Now the world is on the verge of a new birth weapons - more dangerous and tactically deadly than anything in stories. A number of authors believe that it will not be able to change the world and will not become a revolution in military affairs, being a kind of improved version of existing cruise missiles and ballistic missiles of operational-tactical complexes. Given the fact that many modern missiles use stealth technology, which makes it difficult to intercept, this point of view is justified to some extent.

However, do not forget that a full-fledged hypersonic weapon gives its owner two important trump cards at once. The first is the extreme complexity of interception, and the second is the minimum response time to a threat. Not every enemy will quickly orient and take appropriate measures against a combat unit flying at a speed of twelve thousand kilometers per hour. Recall that it is precisely this speed, according to Deputy Minister of Defense Alexei Krivoruchko, that Russian products such as Zircon will be able to develop (although more or less confirmed characteristics for this rocket now are 8 Machs).

The Americans are still more interesting. The US military budget is several times larger than that of the PRC, and about ten times larger than that of Russia. This allows you to work in a variety of directions, whether it be air, land or sea-based hypersonic weapons. The situation looks something like this. Already in the foreseeable future get AGM-183A ARRW air-launched missile with a hypersonic maneuvering unit - the United States recently abandoned the hypersonic air-based missile Hypersonic Conventional Strike Weapon (HCSW). 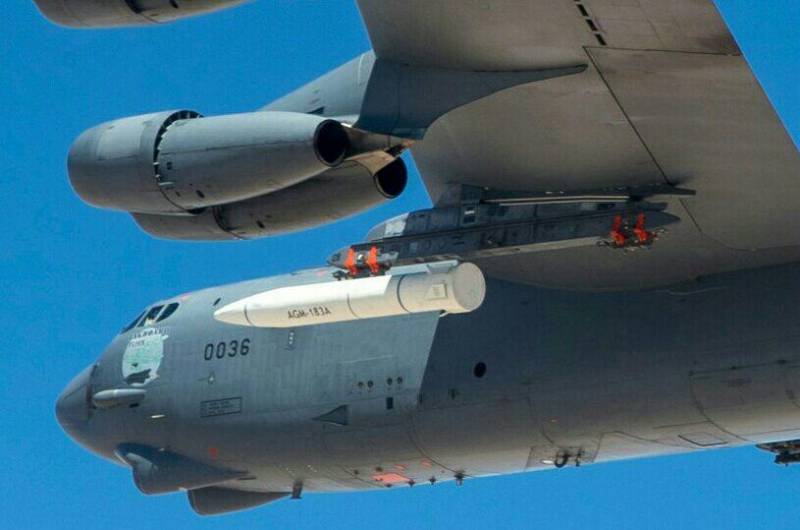 The U.S. Army should receive the Long Range Hypersonic Weapon (LRHW) ground system, which is a dual launcher with ballistic missiles with hypersonic equipment Common-Hypersonic Glide Body (C-HGB). Something similar will be in fleet - Among the first carriers will be a multipurpose submarine type "Virginia".


It’s objectively difficult for Japanese to compete with such titans as the USA, Russia or China. During the Cold War, they did not have such a developed military-industrial complex as the States and the USSR, much has to be created “from scratch”. As for China, for economic reasons it can afford much more than the Land of the Rising Sun.

However, the growing rivalry with China and the growing US orientation towards solving its (mainly internal) problems do not allow the Japanese to relax. Following the fifth / sixth generation fighter (which is starting to look less and less like the economical ATD-X and more and more like the “expensive” European Next Generation Fighter), Japan joined in the creation of its hypersonic weapons, no matter how difficult and thorny this route may seem. On March XNUMX, the bmpd blog drew attention to a document published by the Japanese Ministry of Defense's Acquisition, Technology, and Logistics Agency, titled “A Vision for Promising R&D in the Implementation of Multidimensional Integrated Defense Forces”. In it, the Japanese unveiled the main aspects of hypersonic systems, which are now being developed in the country.

There are two complexes in total. The first is a Hyper Velocity Gliding Projectiles (HVGP) system with a hypersonic planning warhead, and the second is the Hypersonic Cruising Missile (HCM) hypersonic cruise missile. HVGP should be a ground-based mobile complex with a solid rocket that has a hypersonic gliding warhead that can hit ships and ground targets. 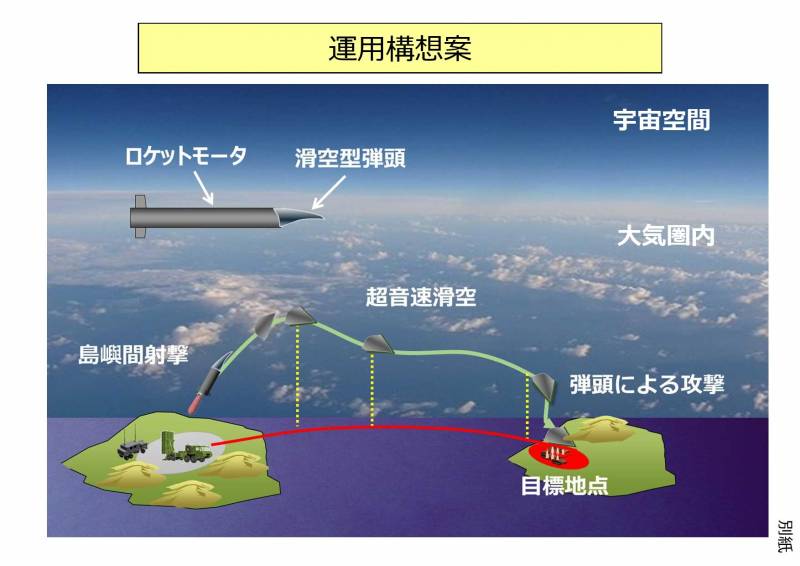 The first version of the system will have a range of approximately 500 kilometers, which is much less than the declared range of Russian and American systems. Recall, according to experts, the range of the already mentioned American LRHW will be able to reach 6000 kilometers at a block speed of more than five Machs. The Russian "Dagger" (which, however, is far from being considered a hypersonic weapon), depending on the carrier, has a range of 2000-3000 kilometers. Now, recall, the only carrier is the MiG-31K, the rest is only in the plans.

In the future, the Japanese want to increase the range of their complex, also focusing on “more complex trajectories”. It is also known that the anti-ship version of the HVGP is aimed mainly against Chinese aircraft carriers: there is a somewhat funny parallel with the Soviet-American confrontation at sea, where the role of the United States will be played by China and the role of the USSR by the Japanese. However, at first the Chinese have to reach at least the level that the Soviet fleet had at the sunset of the Soviet Union. So far, China’s naval forces are objectively weaker in terms of the sum of qualities.

In the case of the second Japanese complex, Hypersonic Cruising Missile (HCM), we are talking about a cruise missile with a ramjet engine. For a general understanding of the subject matter, one can imagine the experimental American X-51A Waverider or the aforementioned HCSW. It is assumed that the Japanese missile will be able, depending on the version, to hit ground and sea targets, which is important given the growth potential of the Chinese Navy. 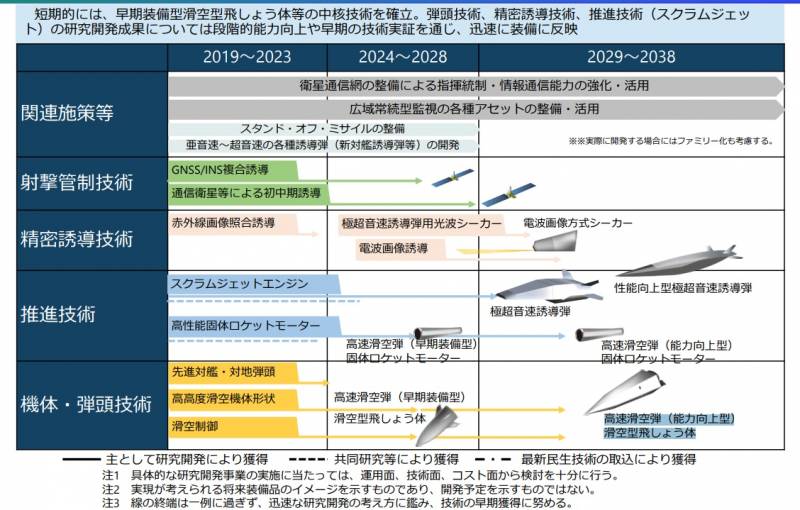 Detailed specifications HCM Japanese Defense Ministry does not. However, experts note that the range of the rocket should be higher than that of the HVGP. An inertial-satellite guidance system in combination with active radar or thermal imaging homing was chosen for the rocket - the same solution was also chosen for the Hyper Velocity Gliding Projectiles. And both missiles should receive a tandem penetrating anti-ship warhead Sea Buster, and multi-purpose MEFP (Multiple explosively formed penetrator), with which it will be possible to hit both ground targets and ships.

It is known that Japan intends to put into orbit a network of seven satellites that will provide a continuous stream of data that will more effectively identify threats and induce hypersonic weapons on them. This all has new risks.

Japan intends to spend substantial amounts on the implementation of the plan, even by the standards of the non-poor US Department of Defense. So, for research and development (R&D) on HVGP allocated 170 million dollars (or 18,5 billion Japanese yen) for 2018 and 2019 financial years. They want to allocate another 2020 million dollars for the fiscal year 230, with the army receiving the first version of the complex - for hitting ground targets - in fiscal year 2026. As for the Hypersonic Cruising Missile cruise missile, its entry into service is expected closer to the year 2030. And then, in the 30s, the Japanese military wanted to get improved versions of HCM and HVGP, which, of course, would require additional costs. 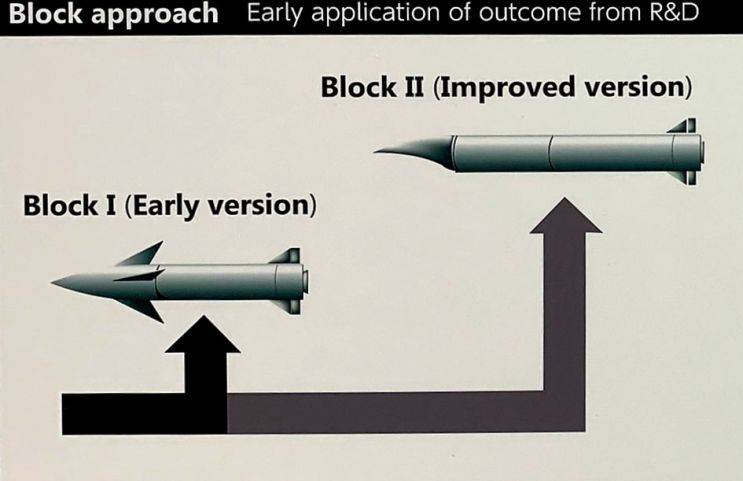 In general, we can expect that Japan will become the third after Russia and the United States, who will have hypersonic weapons in the modern sense of the term. However, ahead of the Land of the Rising Sun is a difficult technological rivalry with the PRC, which may end as a conditional victory of one, or no less conditional victory of the other.