What will and will not be: US Air Force hypersonic weapons 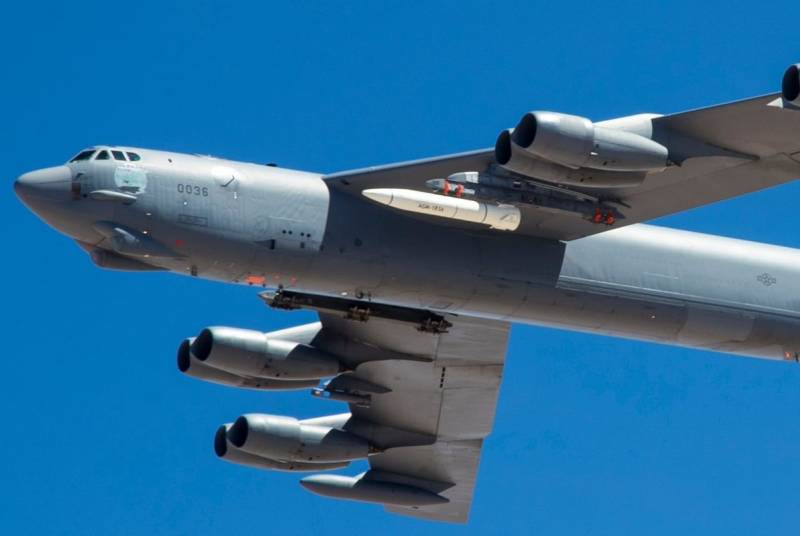 Air Force want to get your own hypersonic weapon even more than the US Navy or US Army. One manifestation of this desire was the conclusion of a contract for the creation of a non-strategic hypersonic cruise missile Hypersonic Conventional Strike Weapon (HCSW). Recall that the corresponding agreement between the Air Force and the corporation was signed on April 18, 2018. The contract value amounted to 928 million dollars. It included “design, development, manufacturing, system integration, testing, logistics planning and ensuring the integration of all elements of airborne hypersonic non-nuclear non-strategic weapons into aircraft”.

The intentions were more than serious, as well as the financing (it was necessary to take into account that this was just an early stage). They wanted to teach the HCSW missile to hit both stationary and moving ground targets. Cruising flight speed was to be 5 Machs or more. The complex was supposed to be able to act in conditions of counteraction of air defense and missile defense systems, as well as electronic suppression.

HCSW wanted to provide a combined inertial-satellite guidance system. As for the carriers, then among those saw "several types of fighters and bombers." There are not many options with strategic bombers - the US Air Force has three types of such machines at its disposal. These are the B-52H, B-1B and B-2 Spirit. As for fighters, the F-15E Strike Eagle fighter-bomber looked the best option, if we talk about a carrier of hypersonic weapons. This machine, we recall, was originally created to solve percussion problems, and it showed itself perfectly in this field. 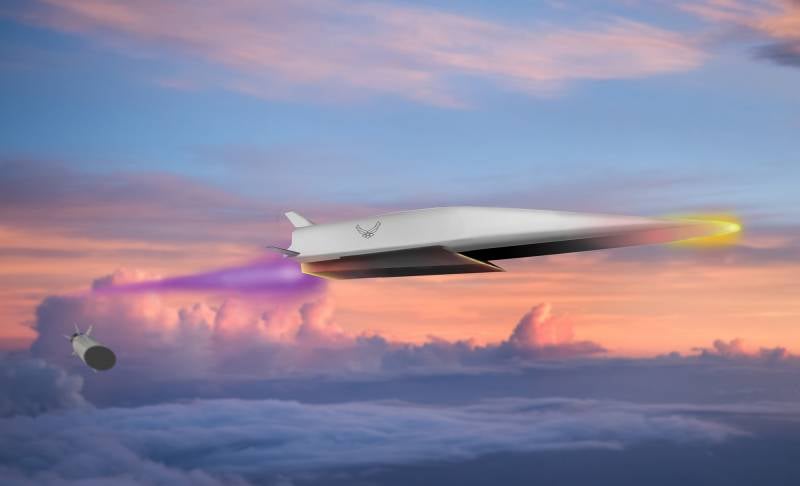 However, now all this is already in the past. In February of this year, it became known that the US Air Force announced the folding of the Hypersonic Conventional Strike Weapon project. In March 2020, Lockheed Martin is supposed to protect the advance project, after which all work on the program will cease. The reason is trivial - there was not enough money.

In the dry residue

Thus, now the U.S. Air Force will finance only one project of hypersonic weapons - we are talking about the notorious Air Launched Rapid Response Weapon (ARRW) complex, which also appears under the designation AGM-183. This is an air-based aeroballistic missile equipped with a detachable hypersonic unit with a Tactical Boost Glide (TBG) engine and capable, according to previously presented data, of a speed of approximately 20 Machs. This is extremely large, even for modern hypersonic weapons.

Allegedly, in March 2019, they threw tests of the TBG engine, and on June 12, 2019 they underwent new tests, in which the strategic bomber B-52N performed a flight with a model of the product. According to media reports, the aircraft used was the B-52N-150-BW S / N 60-0036, which took part in many other tests. 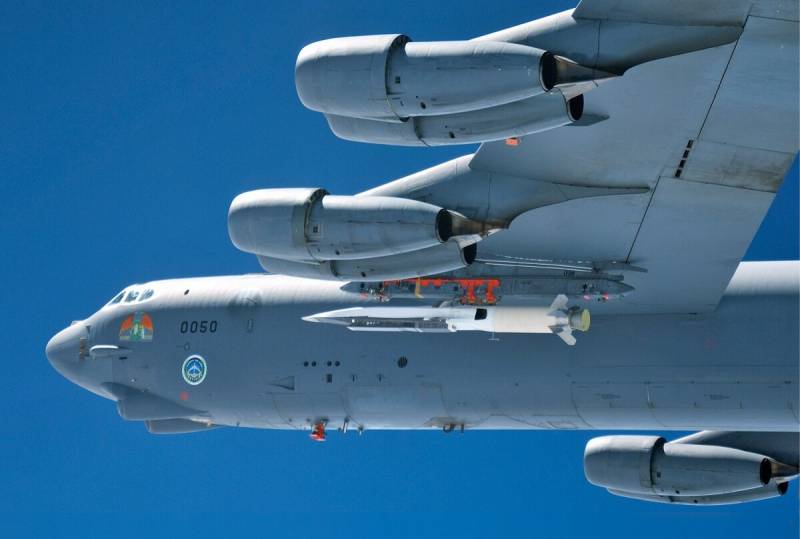 No missile launches were carried out as part of the June tests: in fact, it was about the initial stage of the compatibility analysis of the B-52H bomber and the AGM-183 missile. Unknown is the type of warhead. Although a number of media points to the use of nuclear warheads, the example of the canceled Hypersonic Conventional Strike Weapon suggests rather the opposite.

Whatever the warhead, the complex is of great interest, primarily for potential opponents of the Americans. As far as one can judge, no one has such systems now (the Russian "Dagger" is a different type of weapon).

Recall that the creation of ARRW is carried out under a contract worth $ 480 million, issued to Lockheed Martin in August 2018. The work should be completed by December 2021: it will be conducted at an accelerated pace and, possibly, in the first half of the 2020s, the United States will receive a “full-fledged” air-based hypersonic weapon. 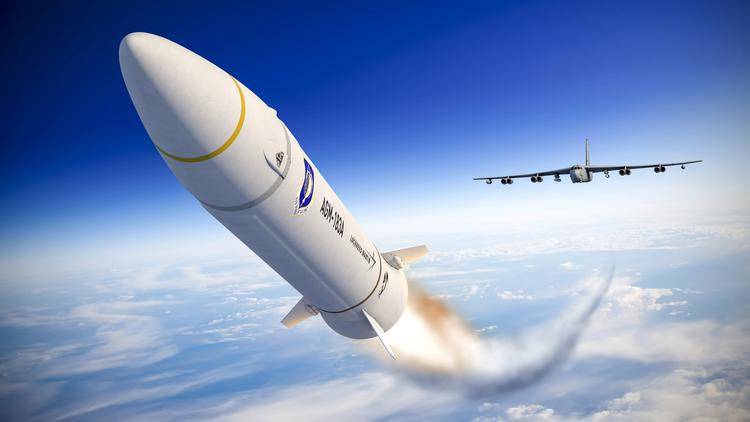 This is what is known more or less accurately. If you “dream up,” you can imagine the integration of the AGM-183 into a wide variety of US air force systems, including fighter-bombers. And the gradual increase in the capabilities of the complex itself, including the flight range. However, on this path, Americans inevitably encounter difficulties that are relevant for absolutely any developer of hypersonic missiles: we are talking about controlling and pointing missiles at hypersonic speeds under conditions of superhigh temperatures. If the States can cope with such challenges, then the US Air Force’s arsenal can soon really replenish with deadly “conventional” weapons, which will be very, very difficult to counter.

Air Launched Rapid Response Weapon should become part of the American “hypersonic triad”, because, as we noted above, not only the Air Force, but the US Navy and Ground Army want to receive new hypersonic systems. “In general, we can expect,” said Viktor Murakhovsky, editor-in-chief of Arsenal of the Fatherland magazine, “that by the end of 2025 the United States will have two (most likely, maybe three) hypersonic products of operational-tactical and medium range, ready for mass production. The US is not currently developing hypersonic weapons with a nuclear warhead. "

Indeed, if we look at ground forces, we will see active work on the so-called Long Range Hypersonic Weapon or LRHW (previously also used the Hypersonic Weapons System designation), which is a mobile ground-based hypersonic complex. This will be a universal solid-propellant medium-range ballistic missile AUR (All-Up-Round), having a universal guided maneuverable planning hypersonic warhead of the Common Hypersonic Glide Body (C-HGB). 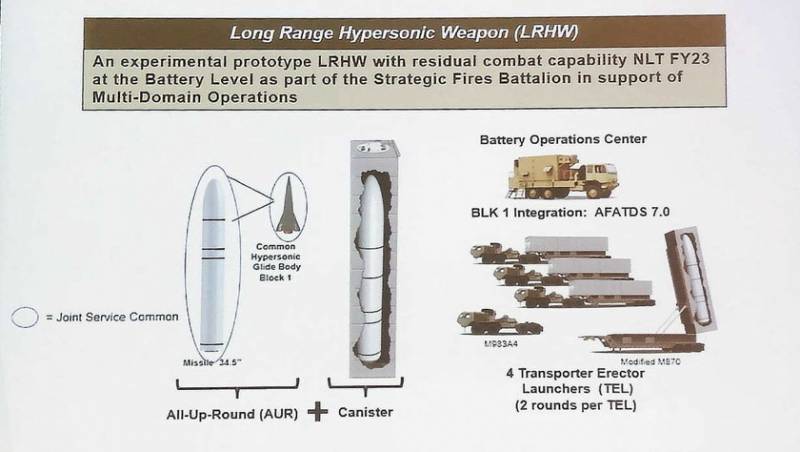 Recall also that the US Navy recently announced plans to equip Virginia-type multipurpose submarines with C-HGB hypersonic glider missiles. In total, the Pentagon intends to spend one billion dollars on research and development under the program in fiscal year 2021.

We are in Yandex Zen
Battle for hypersound
An-12 in Afghanistan
33 comments
Information
Dear reader, to leave comments on the publication, you must to register.