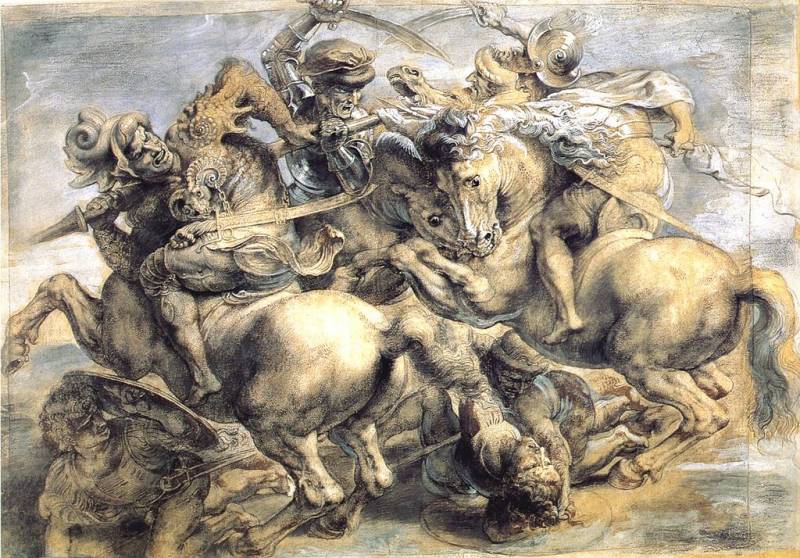 Copy of The Battle of Angiar, by Peter Paul Rubens (Louvre Museum, Paris)

Prophet, or demon, or wizard,
Keeping an eternal riddle
Oh Leonardo, you're a harbinger
Another unknown day.
Look you sick children
Sick and gloomy centuries
In the darkness of future centuries
He is incomprehensible and harsh -
To all earthly passions passionless,
This will remain forever -
Gods despised, autocratic,
Godlike man.

Art and история. A series of articles about armor and weaponsdepicted on the canvases of the great masters, caused a generally positive reaction from the VO visitors, and many began to ask to tell about certain paintings that attracted their attention. But it doesn’t always work out. However, there are topics that are simply impossible to get past. This applies to some paintings belonging to the most prominent artists of the past. And today we will look at two of them at once: Leonardo da Vinci's painting “The Battle of Angiari” and the creation of the painter and biographer of the great Leonardo Giorgio Vasari - the fresco “The Battle of Marciano”.

Let's start with the battles, since both of them are not very well known in our country, because these are “fights” between Italians that took place at the turn of the Middle Ages and the New Age, about which nothing was reported in our domestic history textbooks.

So, let's start with the first one. It was a battle between the armies of Milan and the Italian League, which was led by the Florentine Republic. It occurred on June 29, 1440 near the city of Angiari during the Lombard Wars and ended in the victory of the league forces. The second happened later, namely on August 2, 1554. It was the battle of the last of the many Italian wars that took place at Marciano della Chiana. Its consequence was the absorption of the Siena Republic by the Duchy of Florence.

On that day, the league forces were located at Angiari, a small town in Tuscany, and consisted of four thousand papal throne troops commanded by Cardinal Ludovico Trevisan, about the same number of Florentines and 300 Venetian horsemen led by Micheletto Attendolo. Some of the Angiari residents also decided to speak under the banner of the Pope.

The army of the Duke of Milan, Filippo Maria Visconti, commanded by the famous condottier Niccolo Picchinino, approached the scene a day earlier. Moreover, another two thousand men from the city of Sansepolcro, lying nearby, joined the Milanese. Pichchinino was sure that he had more troops than the enemy, and ordered to attack him in the afternoon of the next day. But when the Milanese went from Sansepolcro to Angiari, they raised so much dust on the road that Miquetto Attendolo noticed their progress and managed to put the troops on alert.

The canal blocked the road to the Milanese. But there was a bridge over it. However, the Venetian horsemen managed to approach him before the Milanese. They restrained the enemy for some time, and although the reinforcements of captains Francesco Pichchinino and Astorre II Manfredi forced them to retreat, the papal forces managed to fully prepare for the battle and even launch a response attack on the right flank of the Milanese. The battle was very stubborn and lasted for four hours. However, this was only the visible part of this battle. The fact is that while all this was happening, part of the league’s troops performed a district maneuver in order to cut off a third of the Milan army, which crossed the canal and left it behind him. The Milanese did not notice this. As a result, although the battle continued until nightfall and even in the dark, the Milanese, despite not having a numerical superiority, lost the battle. The forces of the league folder won a complete victory. 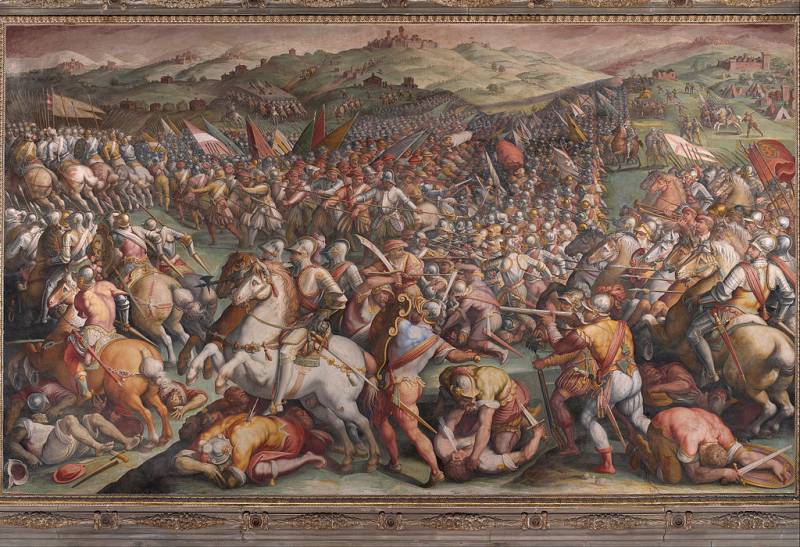 “The Battle of Marciano” by Giorgio Vasari, 1563 (Palazzo Vecchio Museum. Florence)
As for the battle of Marciano, it all started with the fact that in 1554 the Duke of Florence Cosimo de Medici, with the support of Emperor Charles V, decided to oppose his last rival, the Siena Republic, which in turn received help from France, with which it fought Charles V. Florentine army commanded Gianjacomo Medegino - "little Medici", as he was called. Moreover, it included three buildings. The first was Federico Barbolani di Montauto, who had 800 soldiers (his target was the city of Grosseto), the second was Rodolfo Balloni, who had 3000 soldiers (he was supposed to take Pienza), and the main forces under the command of Medegino, including 4500 foot soldiers, 20 guns and 1200 sappers. The main attack was to be carried out against Siena and conducted from three directions.

The Sienans entrusted the defense of their hometown to the general of the French service, Piero Strozzi. French troops took part in the fighting on the side of the Siena, as well as the Tuscans who broke away from the Medici.

Florentine troops approached Siena on the night of January 26, 1554. After the failure of the first attack, Gianjacomo Medici launched a siege, although he did not have enough people to completely block the city. Balloni and Montauto were unable to take Pienza and Grosseto, and French ships threatened the Florentine supply line passing through Piombino. In response, Cosimo hired Ascanio della Cornia with 6000 infantry and 300 horsemen, and waited for the imperial reinforcements to approach.

To ease the enemy’s pressure on Siena, Strozzi launched a sortie on June 11. Leaving part of the French troops in the city, he marched on Pontedera, forcing Medegino to lift the siege and follow him, which, however, did not prevent Strozzi from uniting at Lucca with the French contingent of 3500 foot soldiers, 700 horsemen and four guns. On June 21, Strozzi captured the town of Montecatini Terme, but did not dare to get involved in a battle with the Medici, but decided to wait for the approach of French reinforcements from Viareggio. At that time, Strozzi had 9500 foot soldiers and about 1200 horsemen, while the Medici had 2000 Spanish, 3000 German and 6000 Italian foot soldiers and 600 horsemen, while new reinforcements from Spain and Corsica also moved to join him.

Meanwhile, Strozzi returned to Siena, as the situation with the supply of the city became critical. Piombino could not be taken, so help from the French did not enter the city. It was decided to leave the city and defeat the enemy in a field battle. In the next three days, the Sienans occupied several nearby towns and forced the enemy to gather all their forces for a general battle.

On August 1, Strozzi learned that the imperial Florentine troops had finally come and were preparing for battle. In the morning, the enemy forces were built against each other as follows: 1000 Franco-Sienna cavalrymen stood on the right flank of the Sienans, 3000 Landsknechts formed the center, 3000 Swiss formed a reserve behind, and 3000 Frenchmen were located on the left flank. In addition, there were 5000 Italian infantrymen under the command of Paolo Orsini. The army was located on a gentle hill, which was convenient in every way.

The Medici on the left flank put 1200 riders of light cavalry and 300 heavy under the command of Marcantonio Colonna. In the center was the infantry: 2000 Spanish veterans and 4000 German Landsknechts, commanded by Niccolo Madruzzo. The right flank was the strongest: 4000 Florentine foot soldiers, 2000 Spaniards and 3000 Italians. However, these infantrymen did not differ in high combat qualities. Behind the three rows of infantry was artillery, which was supposed to fire through the heads of its soldiers. In reserve were another 200 Spanish soldiers, veterans and another company of Neapolitan horse arquebusiers. 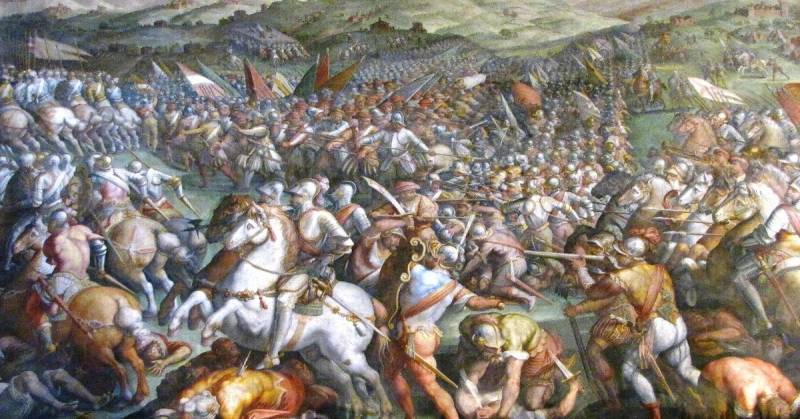 “The Battle of Marciano” by J. Vasari without a frame
The battle began with an attack by the Medici riders on the left flank. They scattered the Franco-Sienese cavalry who fled from the battlefield. In response, Strozzi attacked in the center. Landsknechts quickly ran down the hill on a slope, but imperial artillery with their cores managed to inflict serious losses on them. In turn, the Medici also moved forward the center, which caused panic in the Strozzi troops. And then the heavy cavalry of the Column returned and attacked the German infantry from the rear. The result was that the entire center of the Sienans rushed to save themselves. And only the French infantry not only maintained its battle formation, but even, being surrounded on all sides, fought to the end. Strozzi himself was wounded three times and was taken out of the battle by bodyguards. The battle itself lasted only two hours. Losses of Siena were very significant: 4000 killed and 4000 wounded or captured.

As for the paintings of interest to us, the “Battle of Angiar” was supposed to be painted by Leonardo, who had been recognized by then, but the fresco on the opposite side of the “Battle of Cachine” was young Michelangelo (27 years old). The two frescoes ordered by the Florentine Republic to decorate the Council Hall of the Senoria Palace in Florence in order to glorify their power for centuries. That was the goal of the customer, but by this time both masters had a keen sense of competition and, above all, they wanted to prove to each other which of them was, so to speak, “first” in all respects. Their work was monitored by a third genius - Raphael, who at that time was 21 years old. 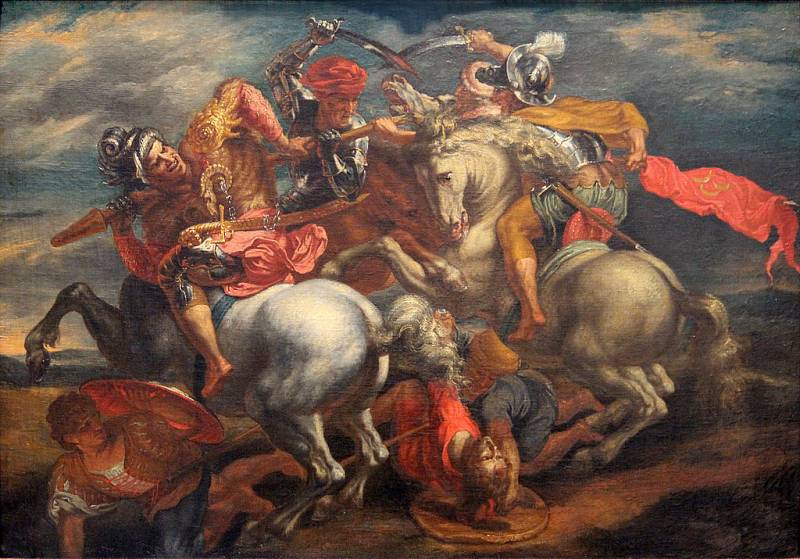 Another copy of Leonardo’s fresco by Rubens (Louvre, Paris)
For his ambitious picture, Leonardo used the encaustic technique ("fixing with heat"), which he read about in Pliny's book, and, alas, he suffered a severe setback. Yes, he drew a cardboard with a sketch of the fresco, and the Senoria commission approved it. Yes, both he and the cardboard of his “opponent” were exposed in public and deserved universal admiration. According to the artist, this mural was to be his most ambitious creation. Its dimensions were 6,6 by 17,4 meters, that is, it was three times larger than the Last Supper. And Leonardo very carefully prepared for its creation, studied the description of the battle and even designed special folding scaffolding that could raise and lower the painter to the required height. Yes, and he chose the plot is very unusual. He did not show the whole battle with the masses of people and horses, but only one of its key episodes — the battle of several horsemen for the banner.

Author:
Vyacheslav Shpakovsky
Articles from this series:
Pavel Korin. "Alexander Nevskiy". The insoluble task of a restless soul
“The Battle of Grunwald” by Jan Matejko: when there is too much epic
"Heroes" Vasnetsov: when the main epic in the picture

We are in Yandex Zen
Leonardo da Vinci. Universal genius of the Renaissance
Chernobyl notebook. Part of 3
22 comments
Information
Dear reader, to leave comments on the publication, you must to register.