Creator of the reduced world. Figures of Igor Ivanov 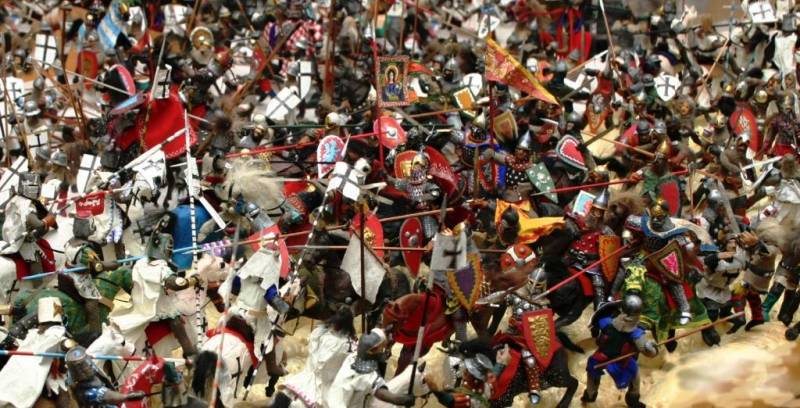 "The Battle of the Ice" performed by Igor Ivanov

Creators of the reduced world. Probably those who read my articles on modeling creativity, drew attention to the excellent color photographs given in two of them with the dioramas of the battle of Borodino. There were a lot of them: horses, people, powder smoke swirling. Although this can be seen, it seems unbelievable that all these figures, including horses, were molded from plasticine. At one time, someone sent them to me, sent along with a letter that I can use them, and I still have them - after all, such beauty! But who sent it was recorded somewhere and, over time, alas, was lost. And I had to give these photos in the hope that the author will go to VO, see them and respond. The first article passed by, but with the second I was lucky. The author saw his photos for dioramas, found my phone through the university and finally contacted me. And he didn’t just get in touch, but told me that he not only did not abandon his hobby, but developed it, and developed it to such perfection that looking at the photographs sent to him, you can only be amazed. 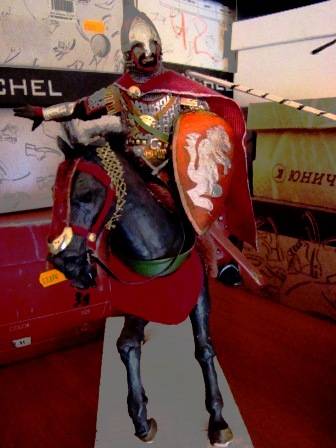 "Our Warrior", a participant in the "Battle"
It is clear that there is nothing supernatural in them. There are figures cast from bronze, “white metal”, epoxy resin, stamped from polystyrene, which are much more “regular” and durable. And worth the big money! But the figures of Igor Ivanov bribe with their democracy. And, most importantly, you can do them together with the children! That is, to introduce children to creativity. 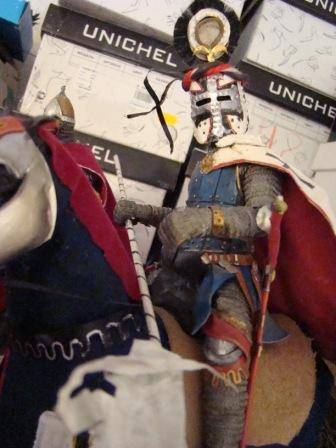 "Their Warrior", a participant in the "Battle"
Of course, I understand that the call to go to circles and teach something to today's children is, to put it mildly, akin to unscientific fiction. And yet. He was recently in one of the art schools of his city. One of the schools is a lot of them. And he marveled at the rush of crowds there. That is, there were many children! Each class was packed with them, which is called to the eyeballs. He looked into one of them, and the children there molded from plasticine who would you think? Hussar! 1812, only without a shako, and so with all its “deeds”, including a car! And they sculpted great, it seems ...

That is, an iPhone is an iPhone, but it is obvious that many are very interested in doing something with their own hands. That is, if there are those “who can and want” next to the children, then the children will go to them. It is only necessary that the technologies used by the head correspond to the mentality of modern children. So that even on purpose the product could not be done badly, and it would not require a lot of painstaking work. And it was just Igor Ivanov who developed the technology for children's capabilities. Simple and very effective. Here is what he himself wrote about this to me: “I make figures with which you can play, although they are made of plasticine. For strength and preservation of shape and proportions, I make a "skeleton" for the figure. I use nickel-chrome wire for the skeleton. It seemed to me that it is more resistant to repeated bends. I twist the two wires with a cross - we get a “skeleton”: arms, legs, the place of twisting - the spine. From aluminum foil I form the chest, pelvic bone, hips, lower leg, shoulders. Then - the highlight of the technology, I take a non-woven fabric, glue it, smear it on one side with plasticine with a very thin layer and then densely cover the skeleton with this fabric. Layer by layer on a wire frame. I tear off pieces of the fabric of the right size simply with my hands, and at the end, if necessary, cut off the excess “meat” with scissors. I cover the incision site with our tissue. Heads made of plastic, hair made of wool. The figure turns out to be strong, keeps its shape perfectly, bends along the joints - it is completely “alive”. The clothes are also made of fleecerin and colored plasticine, but can also be dyed. Hats are removed, swords, swords, sabers - all are sheathed and pulled out. That is, the figures are "very functional." That's all the secrets. ” 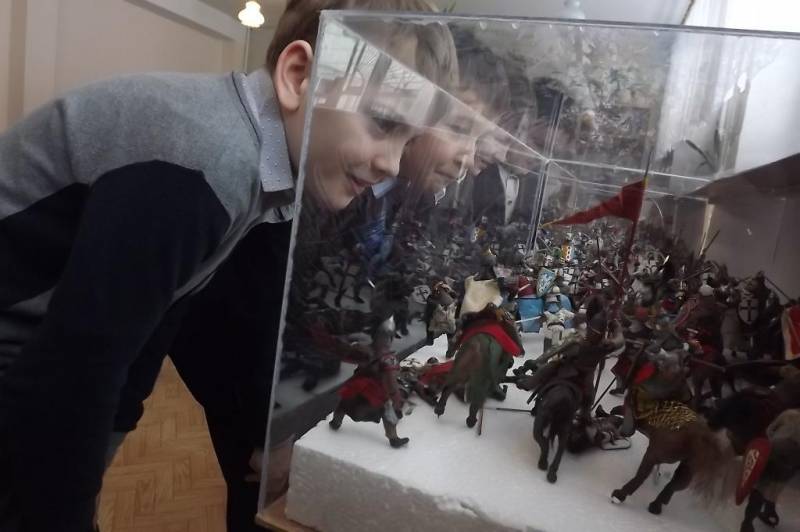 Someone who, and the children are delighted. They don’t need more! This is just for them in strength and in mind!
What does this ultimately give? It gives that the figure acquires, so to speak, a solid volume. After all, if you simply cover the wire frame with plasticine, then when you try to bend such a figure, the wire will simply crash into the plasticine, and it will be damaged. And here, thanks to the fabric, the figure bends easily. And at the same time, it is easy to attach to it purely decorative, plasticine details: shakos, pompons, epaulettes. That is, what children just like and allows you to make the figures bright and beautiful. 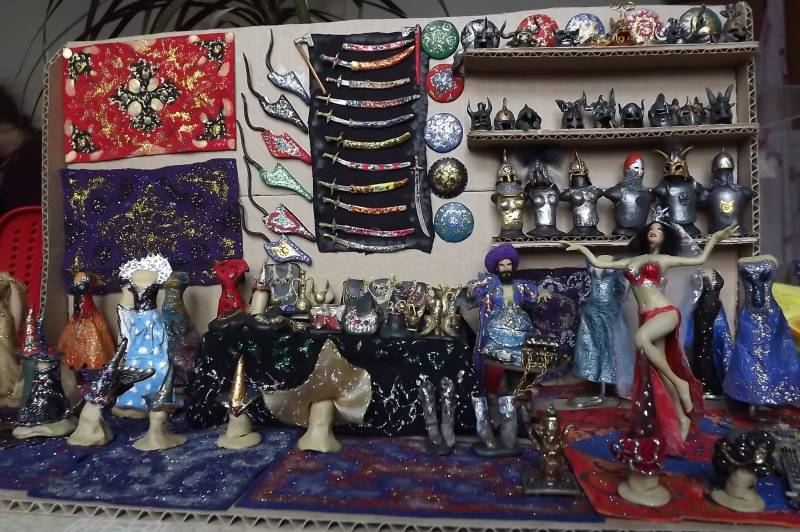 And this, as I understand it, is something like a Zeichhaus
The author sets the figures themselves on papier-mâché dioramas. Organizes exhibitions for children, which are called: "Plasticine game model." There he tells the children about them and shows how to make such figures.

That is, it is clear that these are not collectible figures, which are done by "cool companies" both here and abroad. But for children, this is exactly what is needed. Moreover, with this technology you can work both in circles, and again, if you want to establish mass production and enter the market with them. 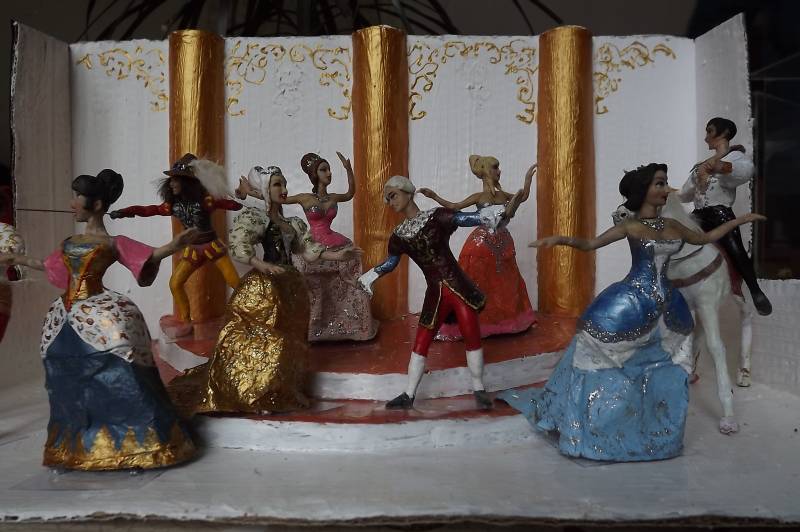 Figures in this technique can be interesting not only for boys, but also for girls. They are already tired of Barbie. “Make yourself a beauty with your own hands!” - this is the slogan of the day
Imagine a set for the manufacture of figures with a height of 54 mm. This is, first of all, a “skeleton” soldered from wire, then pieces of fleece fabric and ... small sticks of multi-colored plasticine - white for trousers, a vest, blue for a uniform, red for epaulettes and its decoration, black - a “bear hat”. And this is how we get the French guard of the Napoleonic army. A saber and a gun, of course, a modern krivoruky child will not do, and he will not have enough patience for this. Because sculpting figures that are natural, like all people, can differ from each other. And it’s quite another thing to sculpt exactly the same guns. This is not just any adult can stand it. Therefore, all weapons should be embedded in the kit ready, cast in a vixint of epoxy. Since there should be (or maybe) not only one such soldier in the set, but, say, a dozen, headed by an officer, it will be necessary to attribute that paints for painting parts of weapons and tinting figures are not included in the set and are purchased separately. 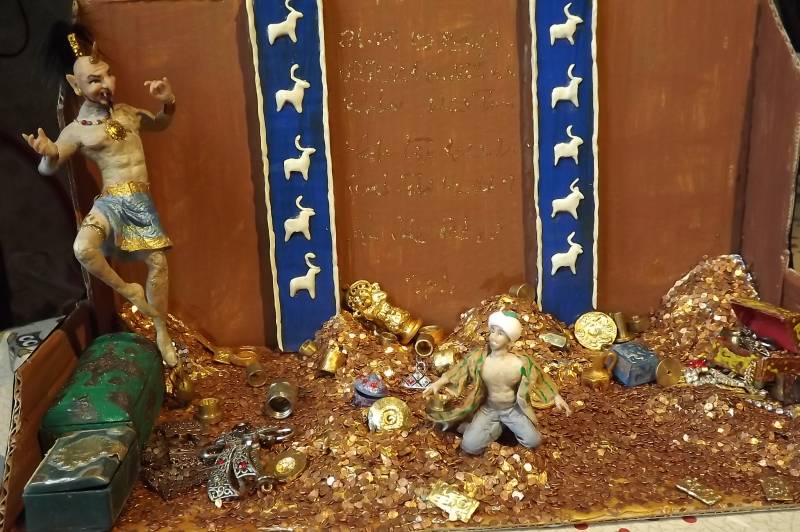 "Cave of Aladdin"
Yes, except weapons the head, which is mounted on the “wire neck" of the skeleton of the figure, must also be cast separately. Again, a child with a face with a face on such a scale does not blind, but to color - completely. The game effect of the assembled figure is its mobility. That is, the pose of each of them can be changed, which, of course, the child is always interested. Moreover, since the positions of all the figures, in general, no one will have two different identical figures, which means that each child will have his own, completely unique collection, not similar to what others did. 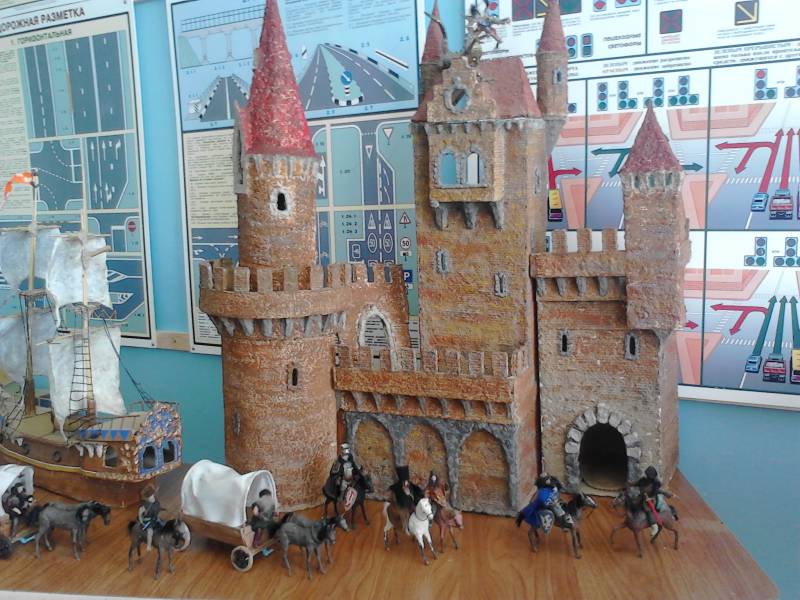 But these are travelers at the walls of a medieval castle
Further in the instructions, you can write that, since the figures are movable, they can be used to create dioramas. Take photos from them, process using a computer and create interesting illustrations for your own descriptions historical battles! This is a hobby, as I understand it, it’s impossible to come up with a modern one! “Look, what a scene I made from the Battle of Borodino and like me!” “My picture of the battle scene of the Hundred Years War got a million likes! Cool!" Well and so on, everyone can continue this if they wish. 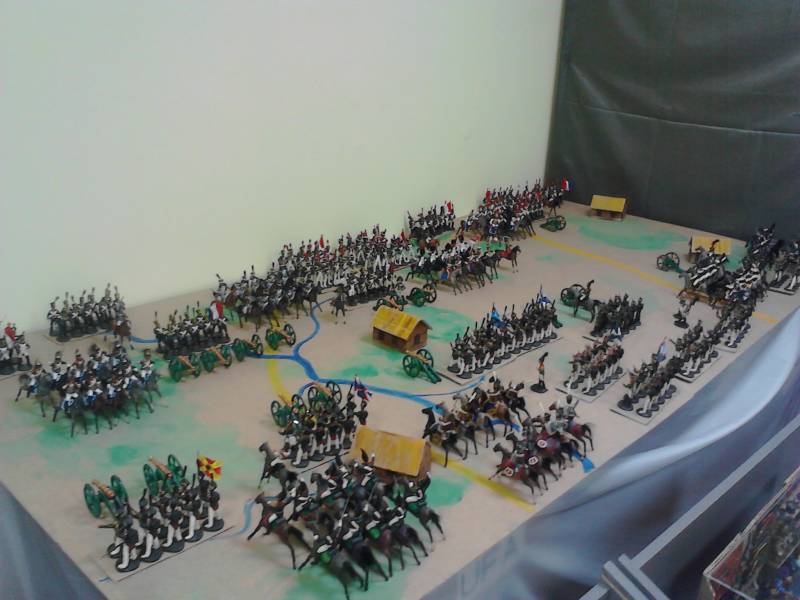 Popular at all times "Napoleonics"
Of course, that with such technology, no figure with the same quality can be made. Knights in "white armor" are not suitable, where color and anatomy are very important. But knights dressed in surcoats and gambizons can turn out to be quite successful. In any case, the experience of Igor Fedorovich shows that, yes, they work out well, just like the soldiers of the era of the Napoleonic Wars. And one more they have a wonderful advantage. They are easy to position and promote using PR and advertising. And that means a lot today. It is a pity that when I wrote my best-selling book PR Design, PR Promotion, I did not know about this project. I would certainly include a description of such soldiers and those PR tools that could provide them with effective market promotion. 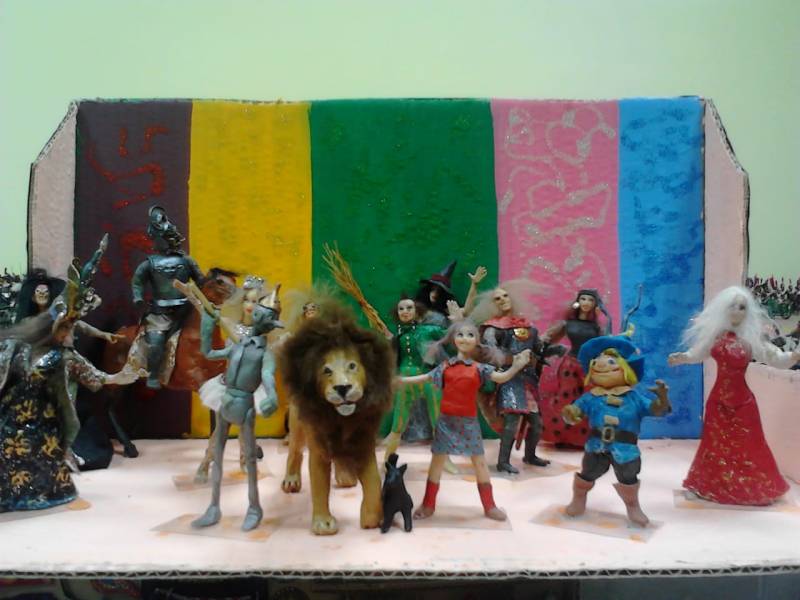 Series: “Let's Blind a Tale!”
I just see articles in the Model Grefix and Military Modeling magazines about the prospects of using sets of such soldiers to develop the creative skills of a modern child. In Japan, by the way, everyone is obsessed with this, all that remains is to take a patent, develop a technology for infantrymen and horsemen with horses, and trade not even sets themselves, but franchises for their production with full PR support. Moreover, the best PR-technique could be the release of children's books-magazines telling about various historical battles, illustrated with photographs of dioramas with these figures. And in the end: "If you want to join in and do something similar with your own hands, then contact ..." 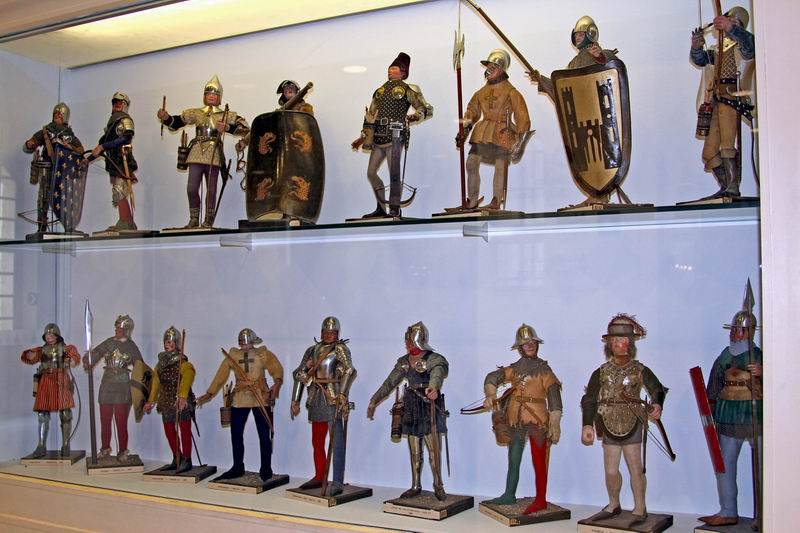 And here are the model figures from the Army Museum in Paris. They can be used to make their excellent plasticine analogues and sell, again, as training aids and ... souvenirs. The main thing is to photograph them easily, easily and draw with all the details! 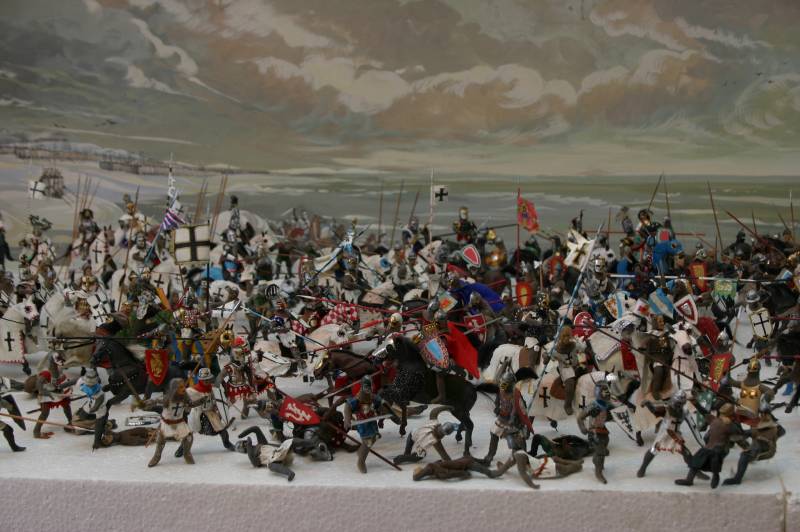 Well, we end with what we started with: “The Battle of the Ice”. This is a ready-made illustration for the school notebook-album "The Great Battles." As an experiment, you can launch a project through an agreement with some small-town ministry of education, where people are prone to "innovation" and to make themselves known. And that’s what we need. Say, 800 schools, let them buy 100 of these sets ...

Taking this opportunity, I want to once again express my most sincere gratitude to Igor Fedorovich Ivanov for sharing his technology with readers of the VO site and sending us a selection of photographs of his products.

Author:
Vyacheslav Shpakovsky
Articles from this series:
Borodino on the table. Figures and dioramas
Military dolls from the Hermitage collection
Military dolls for adults
Figures of soldiers from the Army Museum in Paris

We are in Yandex Zen
Chernobyl notebook. Part of 3
Father told
66 comments
Information
Dear reader, to leave comments on the publication, you must to register.