Military dolls from the Hermitage collection 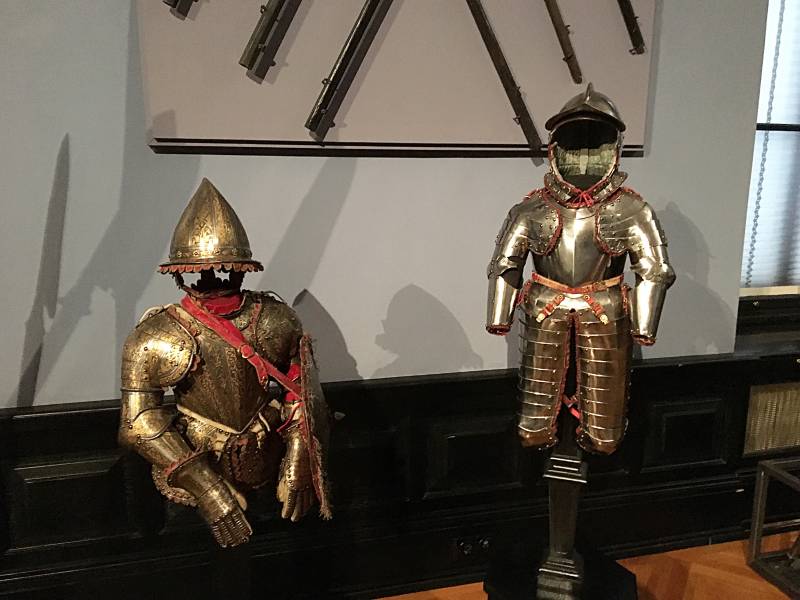 Children's armor is a rarity. And you need to get rich on the rarity, as the chief queen of the Snow Queen advised, and was absolutely right! Many companies produce figures of men and women dressed in knightly armor. Nobody lets out figures of children dressed in armor !!! But for them there is a constant market: souvenir shops at the museums in which they are exhibited. Well let's say it's Vienna armory Hovburg Palace Chamber and the Armory in Dresden, next to the famous art gallery! Meanwhile, look how beautiful they are, what wonderful armor these kids were wearing!

Porcelain, sculptures, bowls everywhere.
And daily - Opening Day.
All this is a fabulous miracle!
All this is the glorious Hermitage.
Alexander Norenkov. Hermitage

This reduced, reduced world. In the previous material about the figures on a large scale, it was said that today it is a very promising direction for the organization of production, and even at the level of the "garage industry". The fact is that modern technologies make it possible to organize it on minimal areas and with the use of minimal equipment. That is, you can produce something, but the question is, what will it give? After all, any production, including model, is organized for the sake of money. But how to get people to buy your products? And, finally, the most important thing - what principle do you put as the basis of your production? What markets will you use?

The most important principle of modern production “fragile things to buy more often” does not fit here: your figures are not condoms or Gillette razors designed for one-time use. So, it remains to rely on the status and popularity of your products. Suppose today such beautiful dolls are popular as in our photo, and you immediately sew new dresses to them, one more luxurious than the other, so that the girl who bought such a doll could tell her friend: “You have a dress like everyone else, it sucks, here I have dresses from Status Accessories, it’s not the cat you’ve sneezed! ”You open the production of doll hats and jewelry, why not? And today such a market sector exists, and you can even occupy your niche in it. 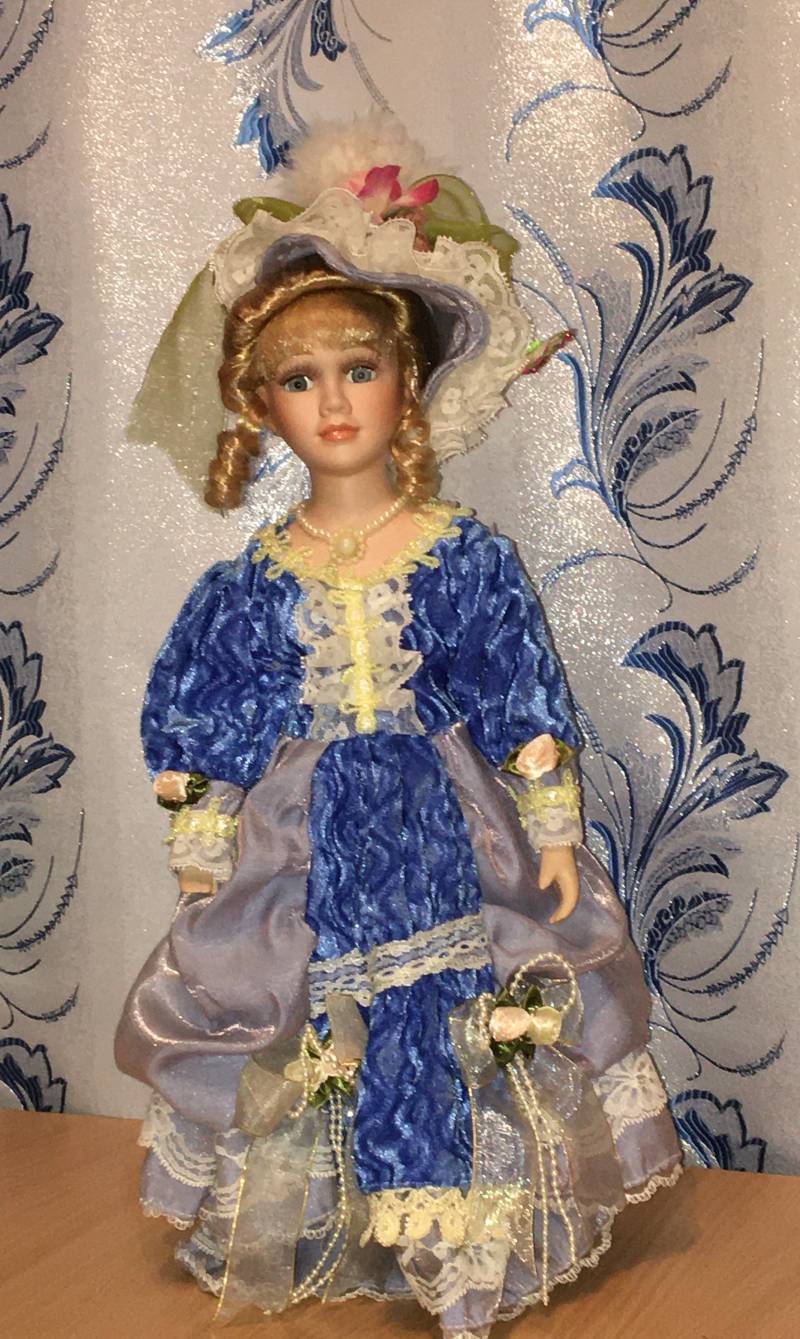 A beautiful doll, isn't it? Now the fashion for such dolls has already passed, but who knows what it will come to again? And you can always get attached to the production of popular goods ...

And here is such a doll Marilyn Monroe. Well, to her you can make a collection of dresses from the most famous and cult films with her participation! 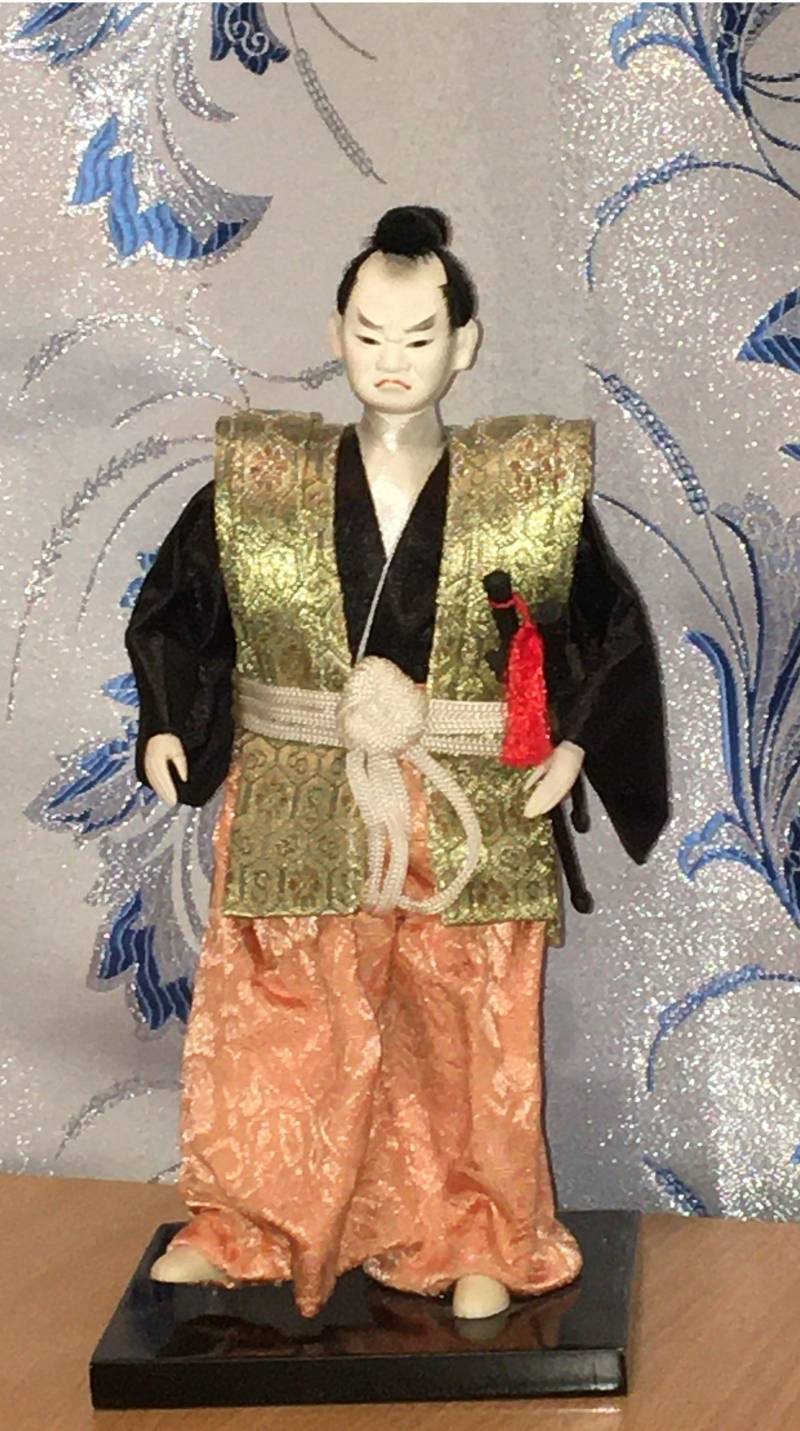 Or suppose you know that a certain company produces such a figure of a samurai, as in the photograph. But at the same time, you also know that the swords for her from this company are rubbish, cheap plastic. Make them steel, with a beautiful tsuba and not only that, sew him a ceremonial costume with hagabakama pants so that they drag him along the floor and, to them, to the whole costume, make the appropriate sword. Such a set, if done correctly, can even be sold to Japan! 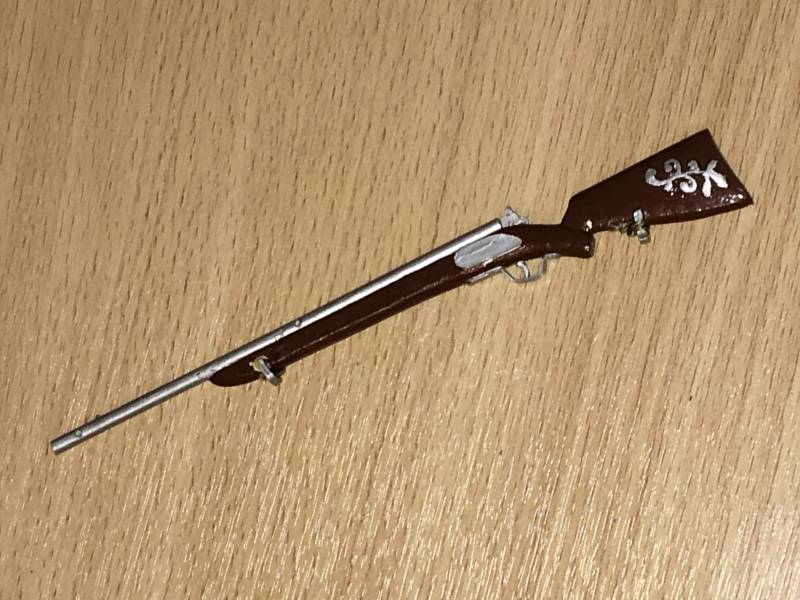 The shotgun to the 1: 12 figures may well shoot a tiny capsule. Why so? “Awesome! It doesn’t shoot at all, but it shoots at us! Unique selling proposition!" 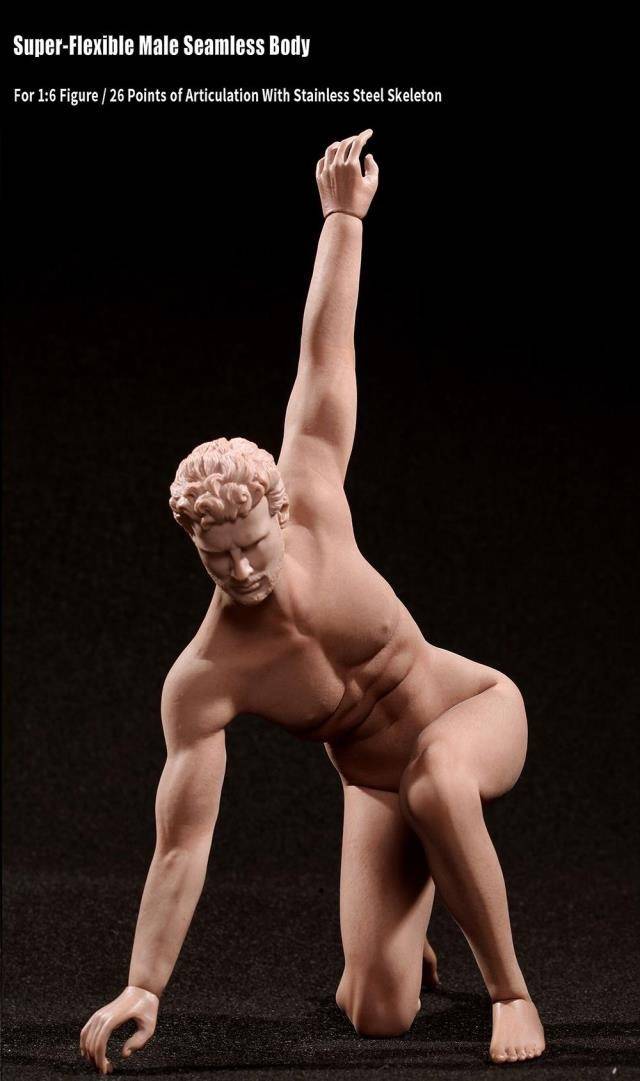 Some firms constantly use the so-called "umbrella brands" to "cut it down easily." Suppose that some company makes such beautiful seamless teloids on a metal frame, flexible, like living people. The hands and head to them are usually made replaceable. And this opens up truly unlimited scope for the creation of an “umbrella”. How? Yes, very simple. There are people of different sizes and, of course, the figure depicting "Comrade Stalin" cannot be of the same proportions as ... the figure of Richard the Lionheart. This is what their creators take into account. But if you can make interchangeable brushes, then you can make interchangeable heads! This is the head of "Comrade Stalin," and it is very well done. But ... what is wrong with exactly the same head, "Stalin is in anger," or ... "Stalin is joking." He said: “Attempt is not torture” and smiled so sincerely, why not. Not all the time, he looked at people as sternly as this “head”. There are photos where he smiles ... 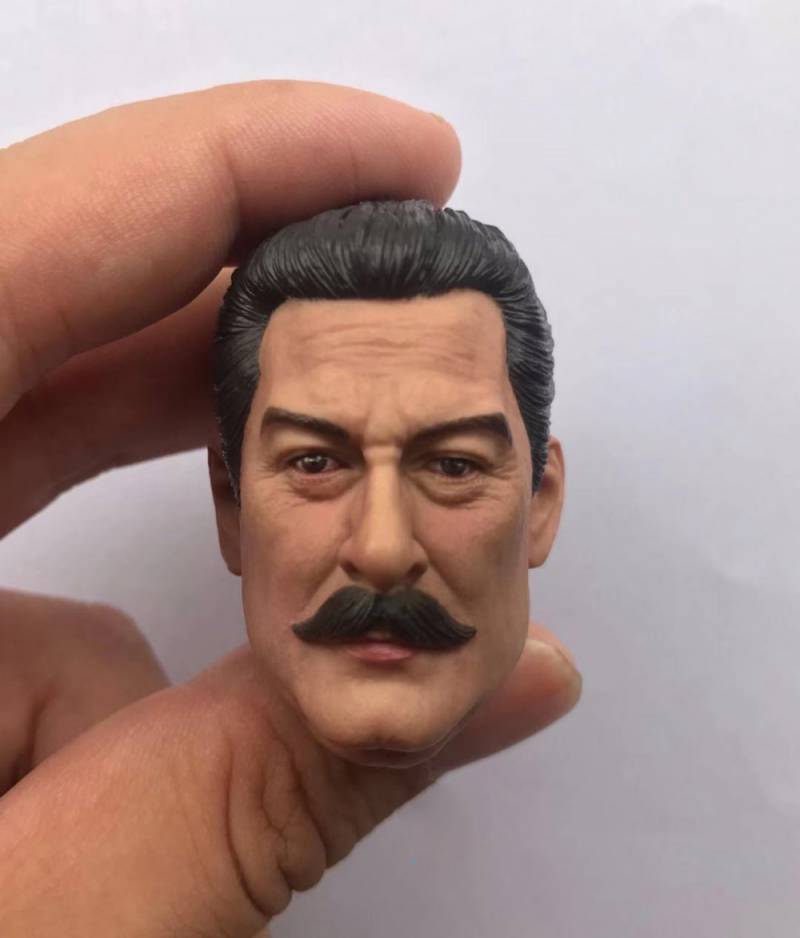 Head for a figure full face 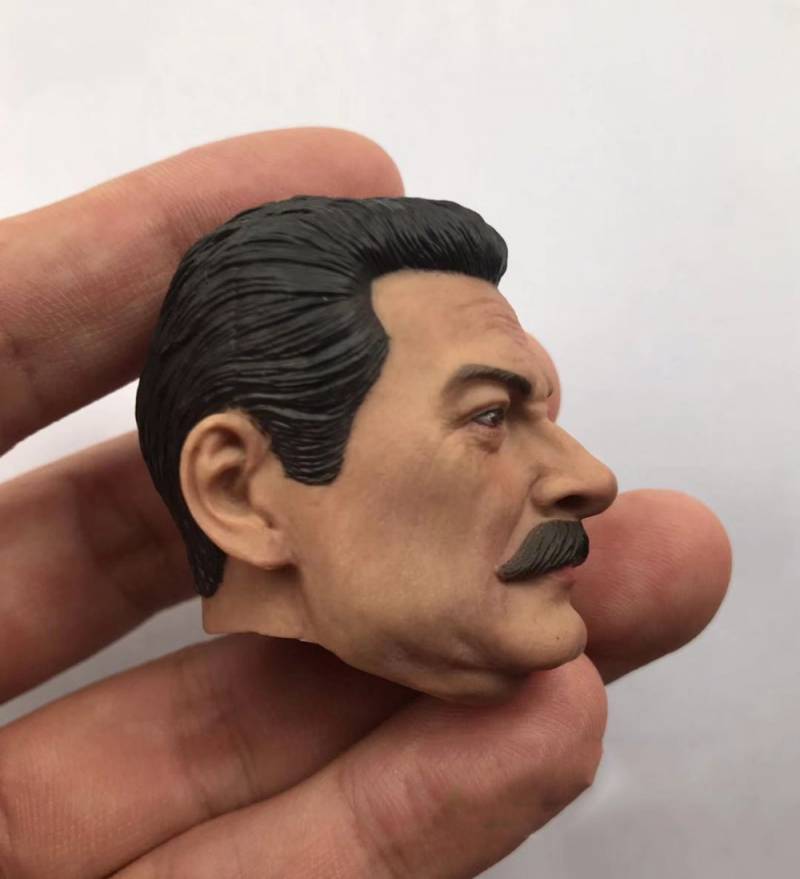 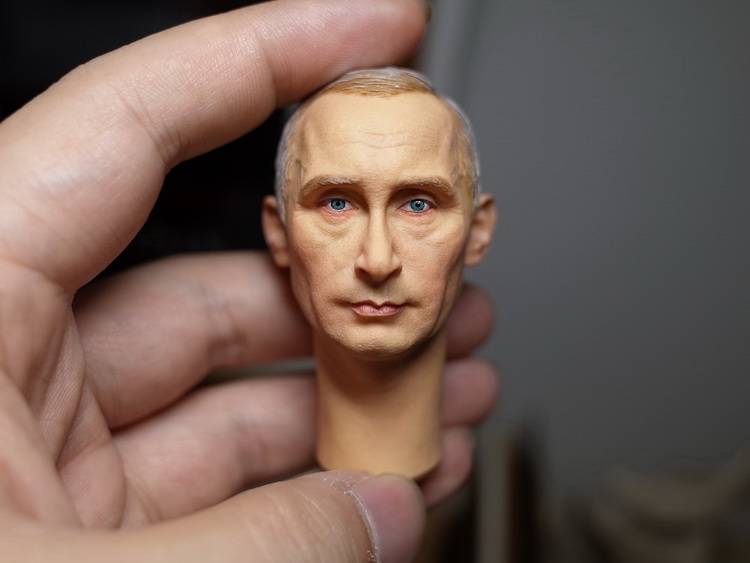 But this is also the head, and this figure is also already available. The market is the market, the one everyone is talking about becomes a popular person and always falls into the "reduced world".

As already noted here, it is very important to find for yourself not only an umbrella brand (you can create your own on the basis of a unique product, but it is more difficult and expensive!), But also a topic. The theme “Knights-children” is good in that its figures will be anyway ... cheaper than the figures of knights of adults, because yes, you understand correctly, less material is used on them. And since parents do make purchases, having visited the same Vienna arsenal and decided to please their child with a souvenir, they will think that it is better: Buy a “knight-child” or “knight-adult”. Many, even the most child-loving parents have a habit of saving, so there is a better chance that they will buy what is cheaper! 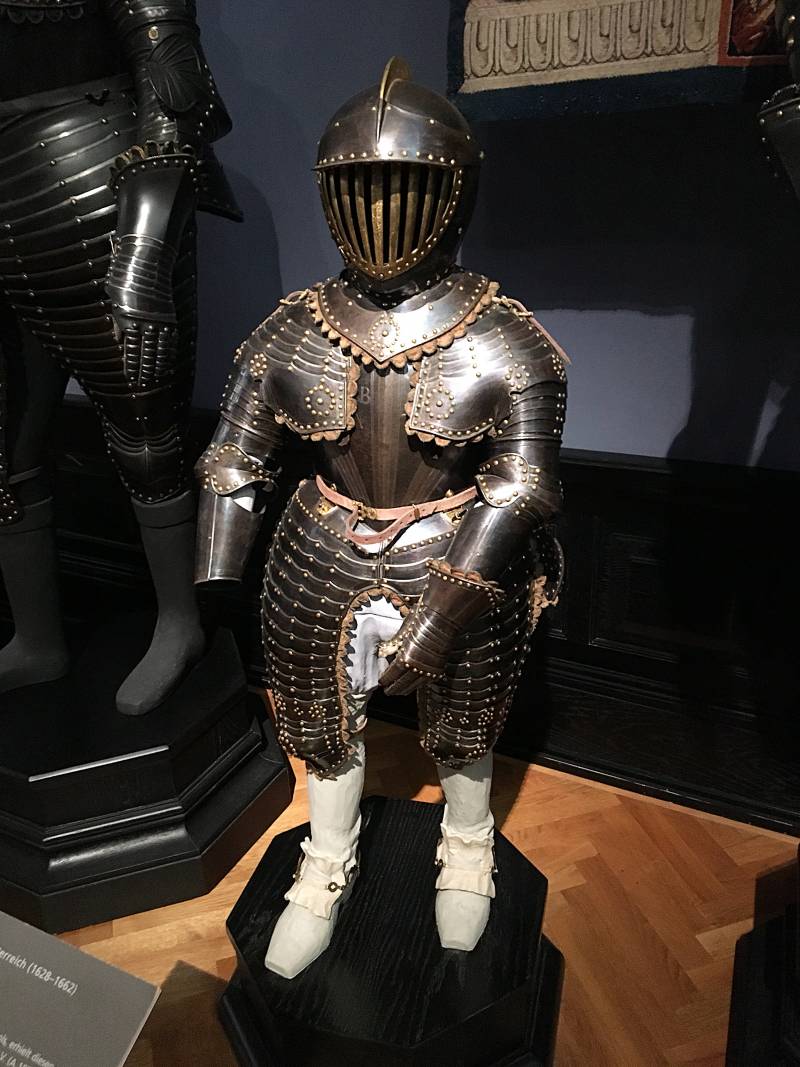 Such armor in miniature can be made entirely of metal doge and this again will allow you to create a “unique selling proposition”.

The emblem of the figures is very important. Pay attention to how much manufacturing companies hang on the figures of modern soldiers, but do you know why? Because they are ... in camouflage and they have very poor emblems. The eye does not “cling” to bright colors. Well, let him cling to the form. That is why, incidentally, the figures of the British guards on a scale of 1: 12 are indescribably popular. And they are issued in red ceremonial uniforms, and red is the most high-energy color. 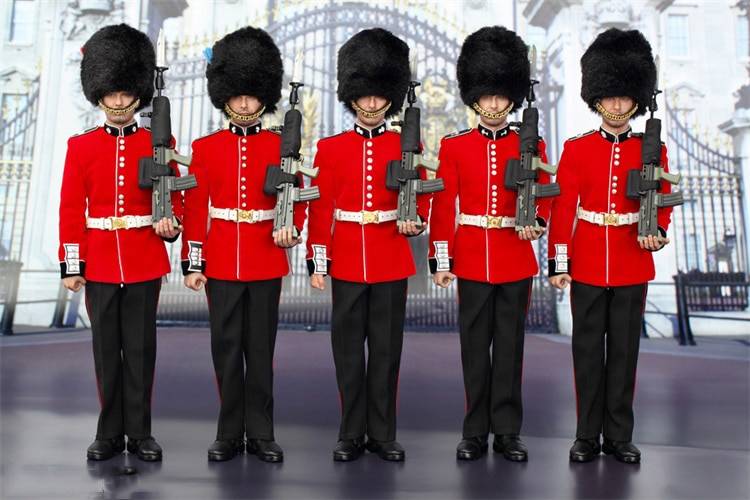 These are just 1: 6 scale figures, but they look just like alive!
But there was a time when bright, colorful uniforms were not uncommon on the battlefield, and these were not hussar uniforms very difficult to manufacture. This is ... soldiers and officers of the "colored regiments" of the White Army in our Civil War. Not without reason, for example, they said a ditty about the Kornilovites: “Who is painted like a poster? It's a Kornilov soldier! ”By the way, the uniform of the red ones with multi-colored stars on the budenovki, with“ conversations ”on the chest and stripes on the sleeves, and even in the“ revolutionary red breeches, ”is also very attractive. However, the uniform of the White Guards is still brighter and more colorful. And most importantly, bears emblems very attractive to the human subconscious - skull and bones. Of course, because the symbols of suffering, death, and atonement are what everyone thinks of, in general. 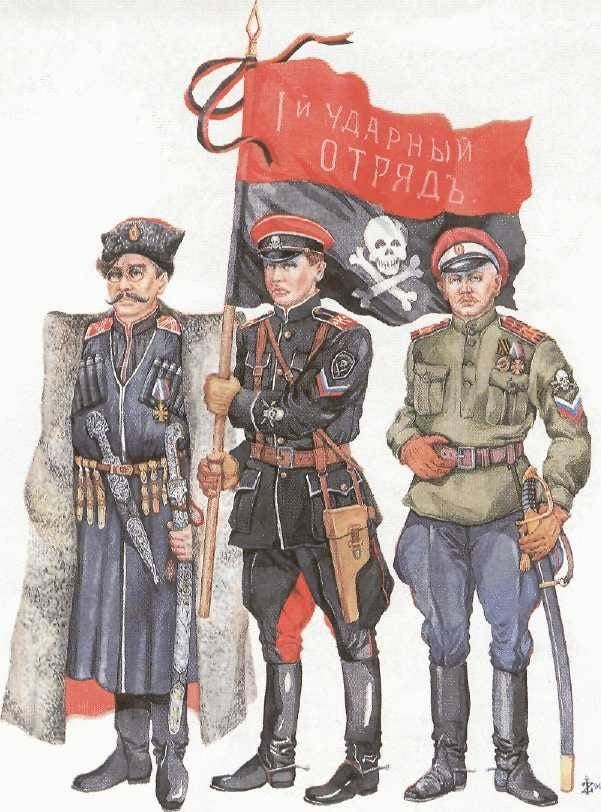 A ready-made kit for the production of figures of “soldiers” on a large scale: the White Guard general, in Circassian with silver gazyry and a Kubachi dagger, and even in a burka (just an amazing costume item on a scale of 1: 6!), “Painted like a poster”, a Kornilovite with a banner and Mauser, and the captain Drozdovets with an order on his chest "For the Ice Camp" in the form of a crown of thorns (again a symbol of suffering!) and a sword crossing it. And let them be confronted by a woman commissar in a leather jacket and a red scarf, and, of course, also with a Mauser, a red cavalry in red pants, and a Baltic sailor, all wrapped in machine gun ribbons and with a red bow on his chest (Fig. I. Zeynalova)

Moreover, the businessman must seize the moment literally on the go, which today again is not so difficult. Let’s take our very same Hermitage ... What do we have there today? And we have complete dominance there ... the Chinese, Koreans and Japanese. Buses with them approach him one by one, so in the famous Knight’s Hall they simply ... do not rest. But there they also opened a hall of oriental weapons, which are much closer to them both in spirit and mentality. And in it we see wonderful pieces of armor that can be worn on ... correctly - figures with faces of the Mongoloids. And it is known that as Europeans get lost among Asian people, so Asians experience psychological discomfort among European people. And then they are led to a souvenir kiosk, and they see ... "all faces are familiar!" Well, how can you not buy as a souvenir something alien, but at the same time dear and close? Whose mentality is open to the wallet, too, haha, and when they see these figures, they will certainly open it. 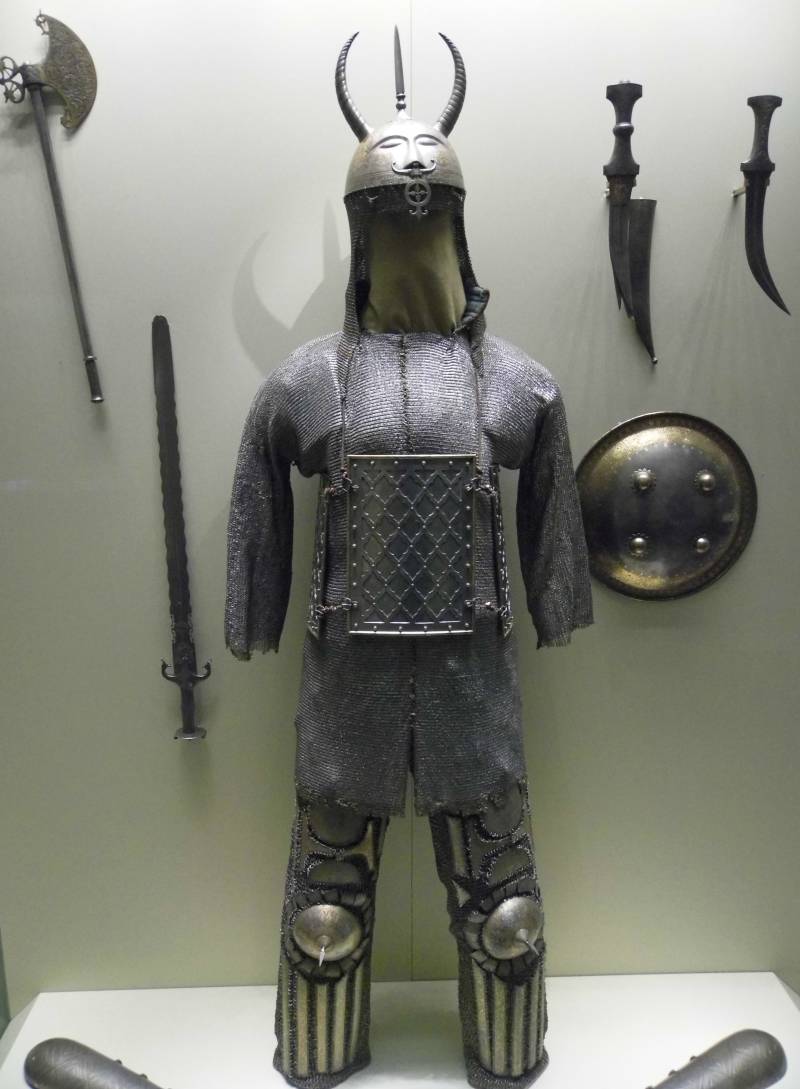 Chahar Ain armor and Separ shield. The second half of the XVII century. (State Hermitage Museum) 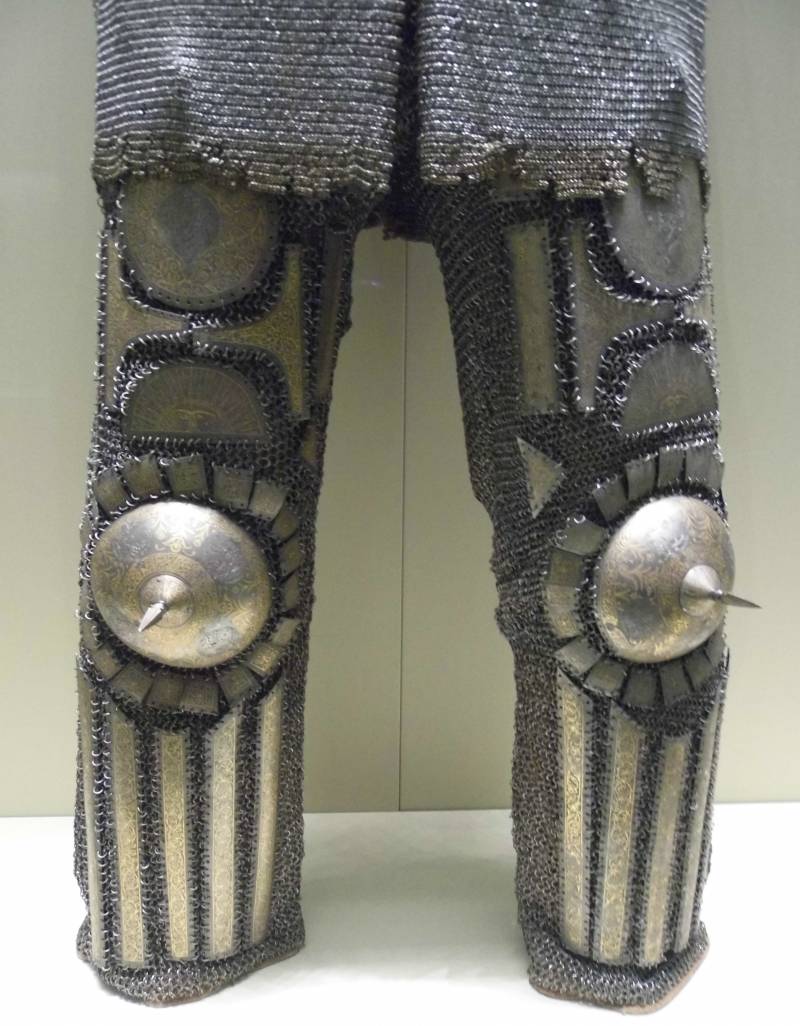 And this armor pants are for this armor. (State Hermitage Museum) 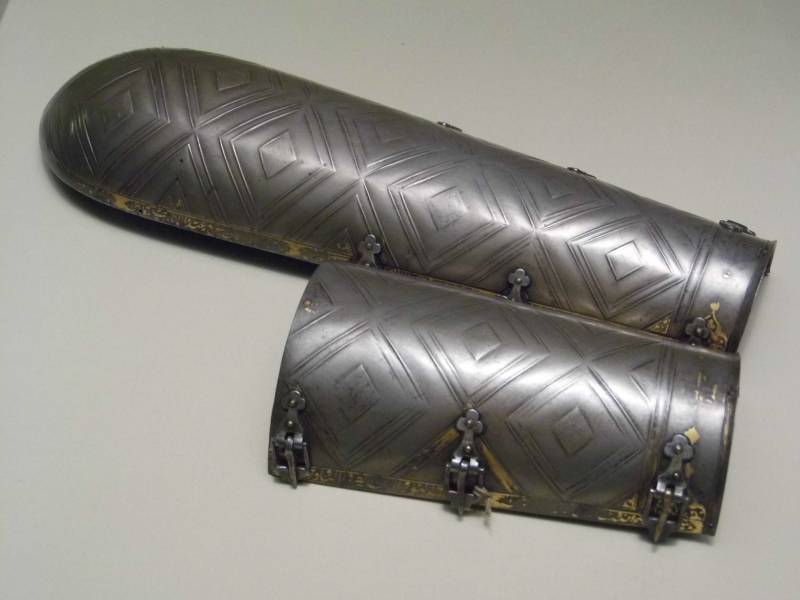 Only a link to the Hermitage plus a photograph of real armor and its details in a colorful accompanying brochure will guarantee the high historicism of your figure and increase its attractiveness in the eyes of potential buyers. After all, not every manufacturer can boast that his figure is dressed in armor, which is an exact copy of the armor from the collection of one of the greatest museums in the world - the Russian State Hermitage. 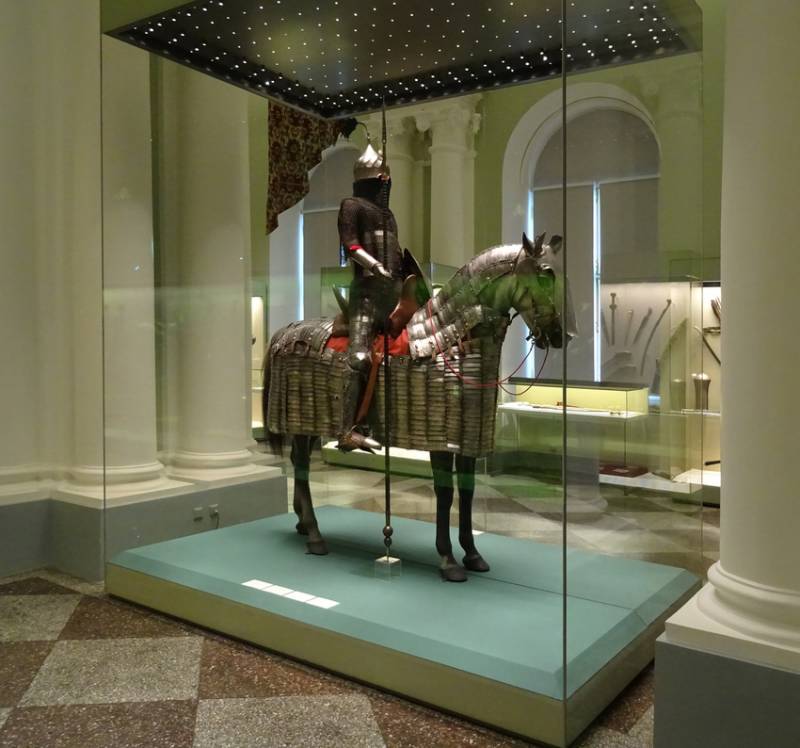 Well, this equestrian figure should become the crown of your work ...

Author:
Vyacheslav Shpakovsky
Articles from this series:
Military dolls for adults
Figures of soldiers from the Army Museum in Paris

Ctrl Enter
Noticed oshЫbku Highlight text and press. Ctrl + Enter
We are
Chernobyl notebook. Part of 3Father told
96 comments
Information
Dear reader, to leave comments on the publication, you must to register.