January 15 2019
200
In the race to replace the "old man" PM in the Armed Forces of the Russian Federation, another model of firearms was seriously involved. weapons. The fact that the mass production of the newest Russian pistol for the needs of the Ministry of Defense of the Russian Federation, which is intended to replace the Makarov pistol (PM), will begin in the 2019 year, RIA "reported earlierNews"with reference to its own source in the military-industrial complex. This is a gun" Udav ", which was designed by experts of JSC" TsNIIochtomash. "


According to the source RIA News", the interdepartmental commission, which decides on conferring the letter O1, allowing mass production, to a new image, will complete its work in March 2019. After that, it is planned to launch a new Russian pistol into the series. At present, the question is being decided on what kind of production site a new pistol will be manufactured. Three main options are being considered: Vyatskiye Polyany, Kalashnikov and TsNIItochmash.

“The main contenders are Moscow and Izhevsk, while everyone understands that the main technologies and competencies that are necessary to produce a new pistol are from TsNIItochmash,” said the source.

January 5 2019 years official site The Central Scientific Research Institute of Precision Engineering reported that the tests of the new promising pistol complex chambered for 9x21 mm took place from August to December 2018 at the test base of TsNIItochmash JSC (part of the Rostec state corporation) and the Defense Ministry of the Russian Federation testing grounds, located in the Western and Central military districts. According to the developer, the new pistol complex was exposed to various mechanical and climatic factors to check for compliance with the requirements of durability (stability, durability), which were established by the regulatory and technical documentation of the customer. In addition, studies conducted ballistic characteristics of the gun. 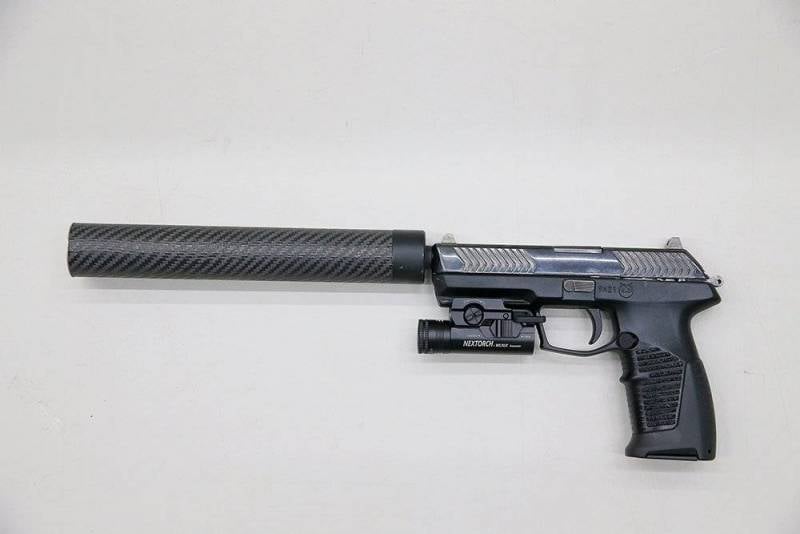 According to the TsNIItochmash website, the tests confirmed the high performance characteristics of the new pistol, its survivability and ability to function in very harsh, truly extreme operating conditions. For example, it is reported that the gun worked steadily in a very wide range of ambient temperatures: from + 50 to -70 degrees Celsius. According to TsNIItochmash, currently the results of tests of the new pistol complex are under consideration by the state commission.

It can be said that the new pistol was the result of the natural evolution of similar models of small arms, which is associated not only with the progress of technology and design ideas, but also with new challenges of time, which include changes in battle tactics and increased protection of opponents. The weapon, developed under the theme "Boa", is a promising pistol with a trigger mechanism of double action and automatic slide latch. The weapon developed to replace the Makarov pistol was first introduced in 2016. At the same time, there is not so much information about the development of designers of TsNIItochmash JSC. It is reliably known that the pistol complex was created under the cartridge 9x21 mm, characterized by increased power and armor-piercing bullets. The use of such ammunition is one of the main objectives of the development of a new pistol - the ability to confidently hit the enemy's manpower, using modern individual means of armor. In addition to the powerful cartridge, the pistol is distinguished by the presence of a roomy magazine, which is designed directly for 18 cartridges. Shop old PM chambered for 9х18 mm holds all 8 cartridges.

The 9X21 mm cartridge is a Russian central-ignition pistol cartridge with a flangeless cylindrical sleeve with a small taper. This munition was developed by engineers of the Central Research Institute of Precision Engineering in the city of Klimovsk at the beginning of the 1990-s. It is noted that the development of ammunition was carried out from 1992 to 1995 years. The cartridge was originally designed to effectively defeat opponents who are protected by personal protective equipment (body armor, helmets, etc.). The cartridge and some new pistols for it were created in Klimovsk in the framework of research and development in the Grach competition for a new pistol for the Russian armed forces. In this case, the use of the cartridge is quite limited. This cartridge, in addition to the new pistol developed under the theme "Boa", can be used with the Serdyukov self-loading pistol (ATP, Gyurza, GRAU 6P53 index) and the CP-2 "Heather" submachine gun.

By the way, a small fact about TsNIItochmash and its products. The gold medals won by the men's Russian biathlon team 13 January 2019 of the year in the relay race in Oberhof, Germany, have also been credited to representatives of the company from Klimovsk near Moscow. So biathlete Evgeny Garanichev used when shooting cartridges "Olymp-BI" produced by TsNIItochmash. So it is safe to say that the development of ammunition for various purposes in Klimovsk definitely knows a lot.

As noted in the "Russian newspaper", the team led by Alexander Borisov, the chief designer of the TsNIItochmash, practically did the impossible. In mass and dimensions slightly higher than those possessed by the Makarov pistol, they managed to realize the power of the shot, which is much higher than the one that is typical for the Colt, which is distinguished by significantly larger size and caliber. Most often, a new weapon in Russia is given the name of its creator. But in the case of a new pistol, a scenario seems to be likely, in which it saves the name of the theme in which it was created. "Boa" - this in itself sounds quite menacing. Moreover, the ideas of the outstanding and one of the oldest Russian designers-gunsmiths Peter Serdyukov, which he had previously implemented in the ATP self-loading pistol, formed the basis of the new pistol.

As noted in the "Rossiyskaya Gazeta", in its destructive power, the Russian novelty can become one of the most powerful in the world. The cartridge of the new 9x21 pistol mm is superior to the Makarov cartridge - 9х18 mm. It would seem that the difference is only a millimeter 3, but in reality the difference in the effectiveness of the cartridges is huge. The target range of the new pistol should be about 100 meters, and for the PM it should be no more than 50 meters. At the same time, at a distance of 100 meters, the Russian armor-piercing bullet of caliber 9x21 mm penetrates body armor consisting of two titanium plates 1,4 mm and 30 kevlar layers or a sheet of steel up to 4 mm thick. 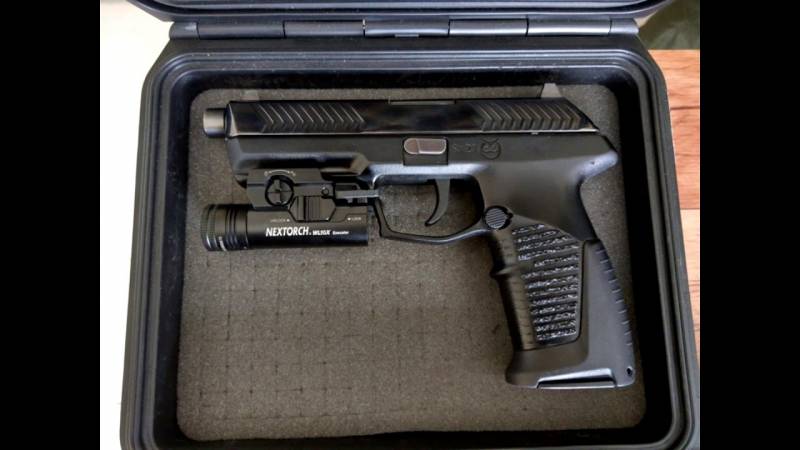 In addition to its destructive power, the new pistol, which was created in Klimovsk under the theme “Boa”, is very elegant, the weapon can be safely called beautiful. We can say that TsNIItochmash decided to take an extraordinary step, since they attracted the team of Vladimir Pirozhkov, an industrial designer with a worldwide reputation, to create the appearance of a new pistol. In the guise of a new Russian pistol chambered for 9x21 mm, you can see its power, as well as the high technical aesthetics of the model. In Russia, they took this step for the first time, while more and more other design bureaus began to involve technical designers in the development of modern weapon systems.

Comparing two promising pistols, which may soon replace the legendary Makarov pistol in the army, TASS military commentator, retired colonel Viktor Litovkin, noted that they are very similar to each other, first of all with their design, and are not inferior Western weapons. This is a new gun "Boa" and Izhevsk gun Lebedev PL-15, which is also actively demonstrated by the Kalashnikov Concern at various weapon exhibitions. “The ergonomics of the weapon are very similar, the pistols are adapted for firing both right and left hands, in particular, due to the convenient location of the fuses on both sides,” Litovkin quotes channel site "Star".

Among the main advantages of the recently completed cycle of state tests of the Boa pistol, one can single out a large volume of the magazine (the Boa’s 18 cartridges versus the 14’s Lebedev’s pistol). In terms of special operations or hostilities, this may have an important role. True, this also explains the greater weight of the weapon chambered for 9х21 mm says Viktor Litovkin. Among the differences, the TASS expert highlighted the high power of ammunition from the pistol created by the designers in Klimovsk. According to Litovkin, this is a few milligrams more gunpowder, which affects the growth of muzzle energy and the initial velocity of the bullet. 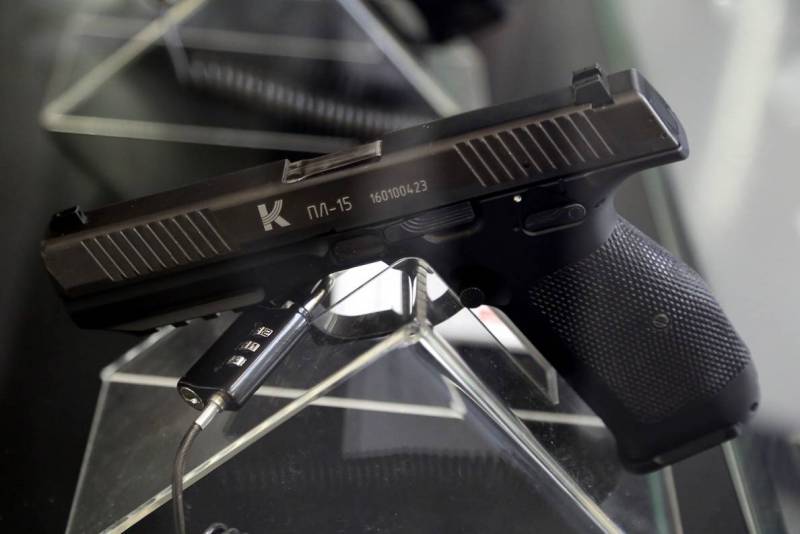 “If we talk about the cartridge itself for each of the pistols, it can be noted that their diameter is traditional and is 9 mm, but there is a difference. The Boa's cartridge is longer, and therefore more powerful: the latter has a sleeve length of 21 mm, and Lebedev has a traditional Parabellum cartridge - 9х19 mm. In addition, you can select the type of ammunition: the "Boa" box-shop on 18 cartridges, the gun Lebedev - on 14 cartridges. Plus, the submarine pistol, due to the smaller magazine volume and the mass of ammunition, weighs less, on the order of 730 grams, and with a loaded magazine - about a kilogram. “Boa” weighs more than 1100 grams, ”the expert noted. Summarizing all the above, Viktor Litovkin stressed the fact that both pistols are similar and should be chosen only on the basis of personal preferences of the shooter.