Pistol Lebedev PL-15 on the verge of mass production

19 September 2018
156
The Kalashnikov Concern, which is part of the Rostec State Concern, in 2019 will launch the Lebedev pistol (PL-15) into serial production. On this earlier, 14 September, the official website of "Kalashnikov Media" reported with reference to the managing director of the Izhevsk mechanical plant (part of the concern) Alexander Gvozdika.


“Serial production (PL-15 pistol) will be in 2019, that's for sure. All equipment is on the way, ”Alexander Gvozdik told reporters, noting that the pistol would be made in Izhevsk using new technologies. "The product will respond to consumer properties of the main customer as on the subject of combat rifle weaponsand in the direction of civilian small arms ”, - stressed the managing director of IMZ. No other details about the start of serial production of the Lebedev pistol have yet been disclosed.

For the first time, the prototype Lebedev pistol was presented to the general public in the framework of the Army-2015 military-technical forum. A modified and improved version of this gun for the popular worldwide 9x19 mm Parabellum cartridge was presented a year later at the Army-2016 forum. And in 2017, at the Army-2017 forum, the public was presented with a pistol PL-15K, which is, in the shortest possible time, a developed compact version of the standard PL-15. The pistol is equipped with a Picatinny-type rail for mounting additional tactical devices, the PL-15 magazine is designed for 14 cartridges. According to the statements of the Kalashnikov concern, the novelty has a number of advantages, which include accuracy and accuracy of shooting, a small thickness of the pistol and ergonomics of the handle. 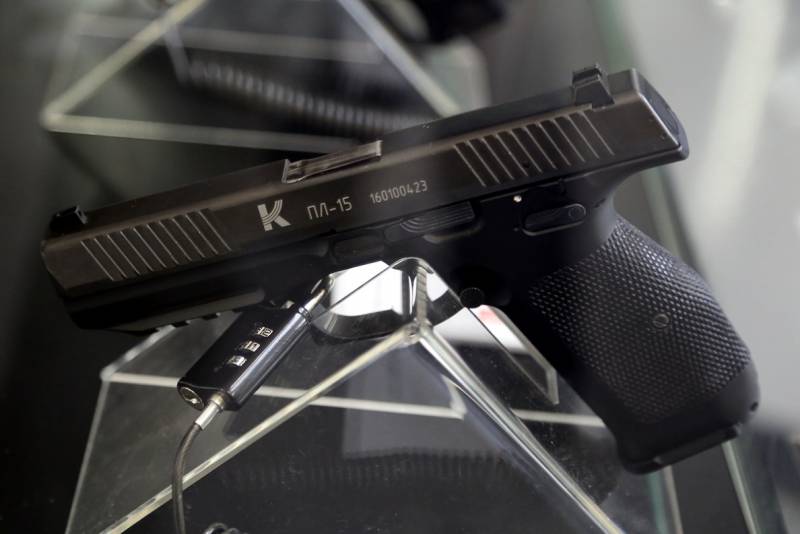 The development of the Lebedev pistol began in 2010-ies, the designer and sports shooter Dmitry Lebedev was responsible for its creation. When creating a new gun, the focus was on issues of ergonomics and product balancing. All this should help an experienced shooter to significantly improve the accuracy of firing a pistol without thinking. The gun was created in the interests of the Russian special services and the armed forces. The weapons are planned to be delivered to the army and police. The compact version of the pistol - PL-15K, presented at the “Army-2017” forum, is considered as a possible replacement for the legendary PM (Makarov pistol).

The pistol PL-15 was developed for the use of cartridges caliber 9x19 mm Parabellum. The length of the weapon is 220 mm (barrel length - 127 mm), width - 28 mm, height - 136 mm. The basic version of the gun is equipped with a box magazine, designed for 14 cartridges. Small thickness is one of the distinguishing features of Izhevsk news. In front of the gun, the thickness of the gun is 21 mm, in the area of ​​the handle - 28 mm. These values ​​provide the gun with the best performance in terms of compactness in its class. Also earlier it was said that they tried to make the pistol as comfortable as possible in terms of recoil, reducing the throw up after the shot and ensuring the rapid return of the pistol to the aiming line.

PL-15 is a truly compact model of firearms, equipped with modern ergonomic handle. The manufacturer claims that interchangeable plates for adjusting the handle will be available with the gun. This will allow shooters with different palm sizes to make the weapon more convenient and comfortable just for themselves. The distance between the butt plate of the handle and the central axis of the barrel of the gun is made small - the barrel is just above the top point of the palm-grip that grips the handle. This solution allowed the designers to provide better control of the recoil of the pistol and increases the speed and accuracy of shooting, reducing the time for re-aiming after the shot.

Like most modern models of small arms, the PL-15 pistol boasts two-way controls. The magazine latch button and the switch of the safety switch and the bolt stop delay are two-way. This is done for ease of use of weapons both right-handed and left-handed. 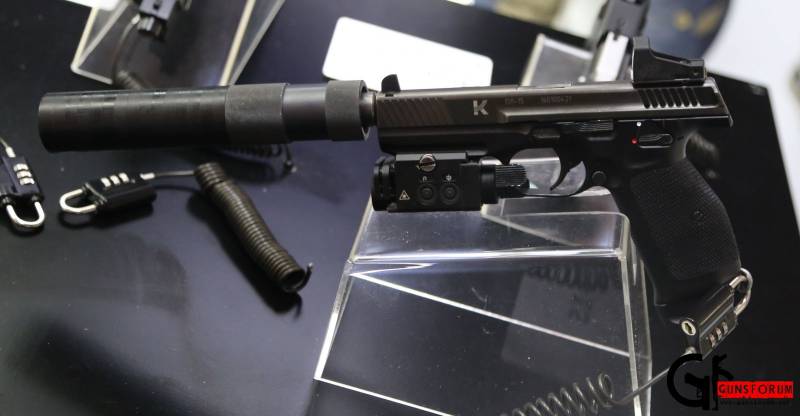 Automatic pistol PL-15 works on the principle of short recoil of the barrel, locking is done by bias the barrel. The pistol trigger mechanism, according to the assurances of the manufacturer, is available in two versions: impactor-type trigger and double-action trigger (self-cocking). Shock trigger mechanism of double-action hammer type with a hidden location and inertial drummer has its own features and distinctive features. With the safety catch on, the trigger and the trigger of the gun are disconnected. In general, the self-cocking trigger is designed so that the pistol could not make a spontaneous shot even when dropped from a height (falling from a human height onto a hard surface), which increases the safety of handling weapons.

In the PL-15, the trigger pull force is 4 kg. The trigger stroke length is 7 mm. Lebedev's pistol is equipped with a tactile indicator of the presence of a cartridge in the barrel bore — when there is a cartridge in the back of the bolt, a special pin protrudes slightly, which allows the shooter to determine whether the weapon is currently loaded or not. This solution also increases the safety of the shooter and others when handling weapons.

The gun is powered by cartridges from detachable two-row stores with the output of cartridges in one row. The capacity of the standard magazine is 14 cartridges. Sights PL-15 open, unregulated, installed in the grooves of the type "dovetail." On the frame under the barrel there is a Picatinny-type guide bar, which allows you to install an additional tactical kit: tactical flashlight, laser pointer, etc. Also, the gun can be equipped with an elongated barrel with a thread for installing a quick-release muffler, such versions of the Izhevsk pistol were also demonstrated at exhibitions earlier. 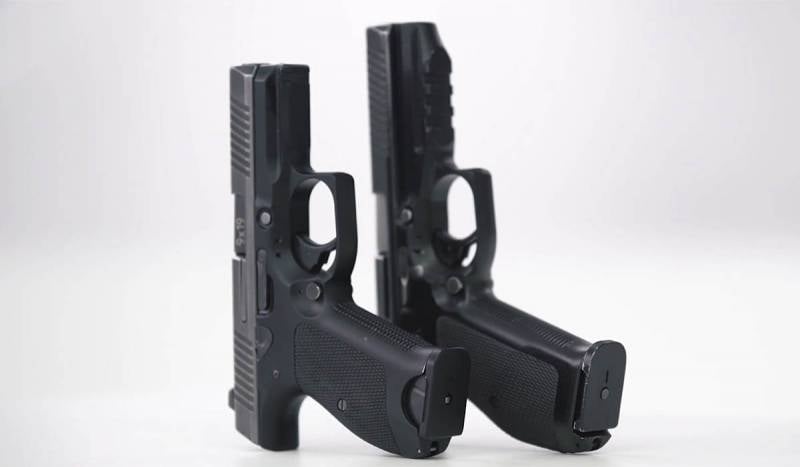 Pistols PL-15K and PL-15 together
The compact version of the pistol, which received the designation PL-15K and made on the basis of a full-size model, was introduced last year and is also a classic self-loading pistol. For reloading the weapon, the stroke of the moving barrel is used, which, under the effect of recoil, moves back along with the bolt. The barrel stroke of the PL-15K when fired is short, that is, less than the stroke of the bolt. This scheme of automation, selected by the designers, allowed them to create a gun that has the minimum size. The design of the pistol PL-15K allows you to install on it a longer barrel, as well as various options for front and rear sight. In this case, the trigger stroke was deliberately made great, and the force when pressed is 4 kg - this is more than that of analogs. Spontaneous shot is almost impossible.

The version of the PL-15K turned out to be even smaller, while retaining the caliber 9x19 mm and the magazine on 14 cartridges. The length of this version of the gun is only 180 mm, height - 130 mm. The mass of the unloaded pistol PL-15K is 720 grams. That compactness is called one of the main competitive advantages of the model. If the full-size PL-15, which is also difficult to call a giant, still has some pretty serious competitors in its segment, the niche for which the PL-15K version claims is almost free from competitors. With the most successful development of circumstances, a compact pistol of Izhevsk gunsmiths will finally be able to press down practically the eternal pistol of Makarov, who enjoys indisputable authority among domestic gunsmiths and industry, being in service with 1951 of the year.

Compared with its trouble-free, although already very elderly competitor, the PL-15K has a number of advantages, which include better ergonomics, accuracy, accuracy and speed of fire, small thickness and the absence of levers strongly protruding beyond the side edges of the weapon. In addition, the model can be equipped with self-cocking trigger, which allows you to safely carry a pistol with a cartridge in the chamber without the need to use a safety lever. An important fact is the use of more powerful cartridges 9x19 mm Parabellum, including the possibility of using armor-piercing ammunition. It is also important to increase the capacity of the store: the standard box store PL-15 and PL-15K is designed for 14 cartridges, whereas in the PM only 8 cartridges, the difference is almost doubled.