Perspective models of weapons of the XXI century: weapons from cubes (part 2)

December 9 2018
72
Last time in the material "Advanced samples weapons The twenty-first century, what they can be ”we told about the concept rifle (or Martin Greer’s American concept carbine and the upgrading of existing small arms systems associated with this project. And the situation today is truly strange. Everyone believes that the gas engine weapon has reached the limit of perfection , and it’s hard not to agree with it. It’s not for nothing that all the improvements of modern automatic rifles go mainly along the path of upgrading and hanging them with Picatini slats of every kind there. Shnikova of the latest models, and of many other samples. Well, we’ve figured out how to place the reloading handle both on the right and on the left, especially for left-handers. Well, it’s not critical, and not too many left-handers serve in the army, and those who cannot master the “right-handed grip.” But ... they do it. They increase the level of comfort. But they didn’t bother with the new “Kalashnikovs” and ... why didn’t they become worse? M16 doesn't have a handle either rearranged and nothing, somehow shoots.

A mock-up rifle using the most advanced “cubes” design principles: “our response to Martin Greer”!

Specifically, from the new after the war in general, only the “bullpup” system appeared, according to which there are several serial models of weapons - for example, the French rifle FAMAS, the British SA-80 and the Swiss AUG. The goal, as we all know, was the most benign one — cut the length of the weapon, and leave the barrel length the same. The long barrel is good ballistics and no one argues with that. But the French abandon their "Clairon". Although why would it? Here are the pros and cons of this weapon.

Pros:
The rifle is compact.
It has a high accuracy of combat.
You can quickly modify it for shooting from both the right and left shoulder.
Allows you to shoot rifle grenades of different types, including hanging fire.
The weapon is quite ergonomic, there are removable bipods that increase the accuracy of shooting.
Handle reloading is available for both hands, and does not go beyond the dimensions of the body of the rifle.
It has a high rate of fire, with a relatively small loss of accuracy.
It has a composite case.
It is considered a reliable design.

Cons:
In the F1 model, the 25 charging magazine can be inserted upside down.
On sight, there are only two pillars: on the 100 m and on the 300 m.
When firing rifle grenades are used two types of ammunition, using the wrong cartridge grenade can explode directly on the barrel.
It has a high impact when firing rifle grenade direct fire.
Store capacity is considered insufficient.
Requires non-standard steel sleeve.
Unregulated butt, “rear” balance and ejection of sleeves near the shooter’s face do not please everyone.

As a result, the Germans with the Heckler & Koch HK416 rifle and the Belgians with the FN SCAR are fighting for a new machine gun for the French army. Moreover, both rifles have a traditional design with a gas engine located above the barrel, a modular system and are equipped with all fashionable novelties, such as telescopic butts and numerous rails for mounting optical and collimator sights, tactical lights, target designators and all kinds of attachments.

The earlier attempts to create "automatic rifles of the future" failed nowhere else, either in Europe, in the same France, or in the USA. The resulting samples had a large weight, of the order of 8,5 kg, and turned out to be very expensive due to the presence of all sorts of expensive electronics on them.

However, as time passed, and electronics has fallen in price. Many technologies have been developed, new high-strength plastics have appeared. That is, there is simply a mass of ready-made cubes, of which today it is possible, like from the Lego, to collect anything. An example is the American AR-18 rifle. In fact, the same M16, but with a gas piston. Shops on 20,30 and even 40 cartridges, that is, for every taste. Reliability is higher than that of 16, which was not so much quality as marketing that helped spread the world. The Japanese began to produce it, but for a number of political reasons, it was subsequently abandoned. By the way, the length of its barrel is 494 mm, while the FA MAS 488 is mm, the SA-80 has 518 mm, and the AUG, depending on the modification, 407 has 508 mm. 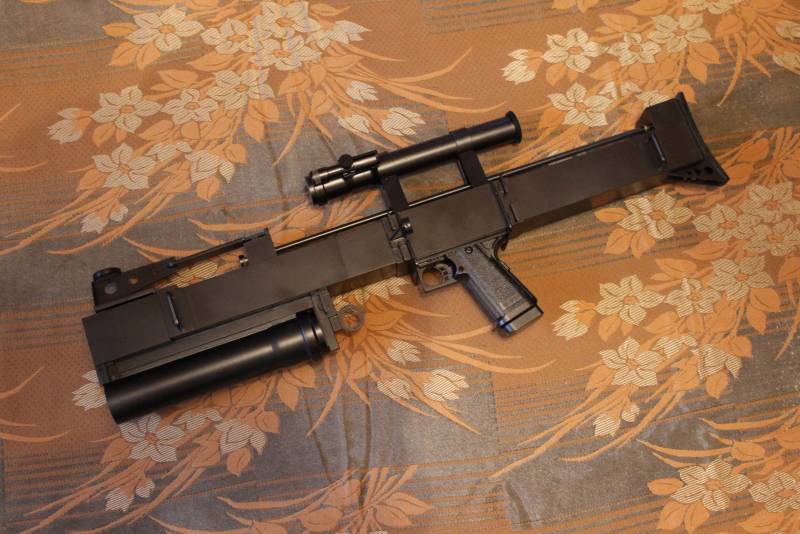 Hence the first conclusion: the barrel of the perspective rifle should be long, with a relatively small total length. Butt necessarily adjustable in length, that is, the scheme "bullpup" immediately disappears. The modular design principle is required. The rate of fire must be high, not less than 750 shots / min, the speed of the bullet is not less than 950 m / s, and better and the whole 1000 m / s and above. Store a minimum capacity of 25 cartridges, but the best is 50.

And here is the second conclusion, so to speak, “for growth”, and its essence is that in the near future, weapons should be manufactured at enterprises ... making computers, and not those equipped with a whole arsenal of turning, drilling, milling and other machines. and translating whole mountains of metal shavings. All this should be kept to a minimum and, pay attention, because all this is precisely the development of technology today! 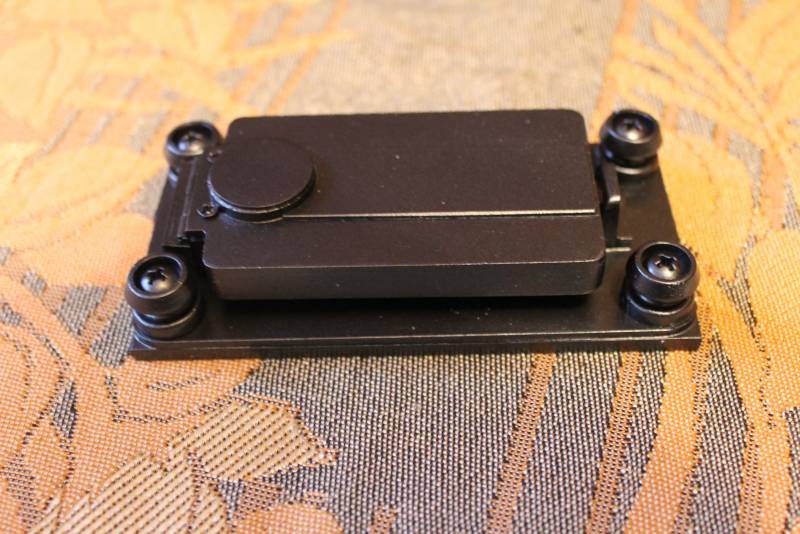 Electronic control unit. In essence, this is a “mobile phone” to communicate with your rifle. The microprocessor in it monitors the number of shots in the trunks, is responsible for aiming, communicates with the computer of the unit commander ....

And now let's imagine what we can think of, knowing all this and based on the trends and conclusions we know. At first glance, the conclusion is paradoxical: the rifle of the future should be a “bullup”, and at the same time it should not be a “bullap”. It should have a long barrel, but be short, have a minimum of "mechanics" and a lot of "electronics", but so that all these cubes of it work with maximum reliability. Is it possible to combine all this? It turns out - you can, if you think. True, what you see here in the photo is just a concept. It is clear that in metal this structure may look completely different. But ... for now, at the level of ideas, it looks like this. Name of rifle EVSh-18 (Shpakovsky electronic rifle, 2018 year). And it may very well be that she will never see the light at all, but it is known that thought is material. Suddenly, someone more knowledgeable, someone more intelligent will read, think and ... do much better.

Here it is, shown in the photos presented here. The device (not shown and understandable why - the concept is “not metal”) is this: inside the case of impact-resistant plastic there is a block of 25 trunks with vertical or longitudinal fins (which one should look better) for better cooling. Between the trunks there is empty space. On the muzzle cut, respectively, the holes for air outlet, located around each barrel. At the end of the case is a flame arrester. When firing gases, escaping from the barrel, create cravings and thus pumped air through the body of the rifle. The more intense the shooting, the stronger the thrust, that is, the well-proven principle of cooling applied to the Lewis machine gun, which had a record-breaking rate of 1200 shots / min for its time. And did not overheat! The length of the barrels 610 mm, that is, longer than that of the RPK-74 light machine gun (590 mm). In this case, the total length of the rifle is only slightly larger - 715 mm. Why did this happen? The fact is that in the traditional rifles and automatic weapons behind the barrel are the bolt, return spring, shock absorber and, in addition, also the butt. There is practically nothing behind the barrels here, except for five vertical cylindrical valves, locking five trunks at a time. On each of them there is a bevel gear at the top, and above all the valves there is a horizontal shaft with five bevel gears and one cylindrical gear. The latter is turned by a worm gear at the end of the shaft, which goes over the body of the rifle in a small ledge in its nose. It also has a pair of bevel gears and the control knob for three positions - forward, all the way to the left and all the way to the right. It is spring loaded, that is, some effort should be made to control this handle. Right-handed and left-handed working with her is equally convenient. We need this gear in order to turn the valves before loading on 90 degrees. And it does not matter which way you turn the handle. The valves will turn and ... a small air outlet will open against each barrel. Why do you need it? 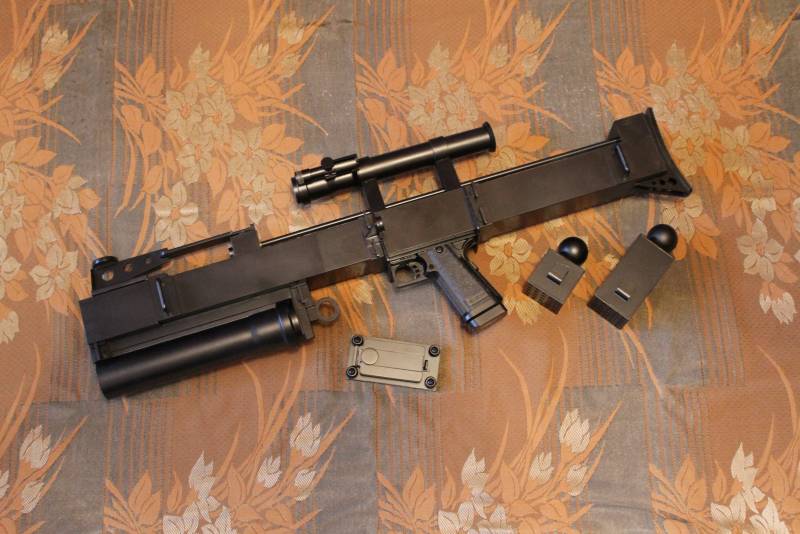 The rifle and its accessories: a control unit and two cartridges. However, the last soldier can take a lot. 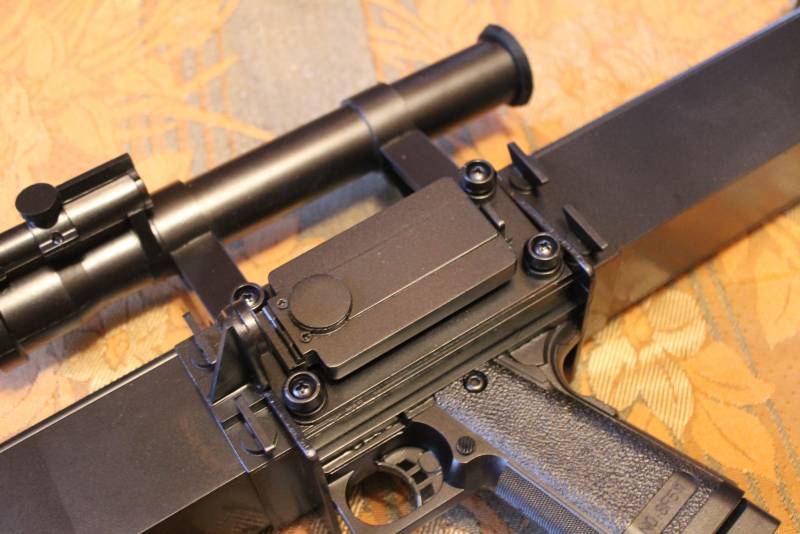 The electronic control unit is installed. It can be installed both on the left and on the right!

But why, since the trunks are at the same time the chamber, they can only be charged in the old manner, from the barrel! To do this, there are two chargers for the rifle - two cartridges, one of which contains 25 shots, and the second - 50, and the charging holes on them coincide with the barrels. The cartridges are spherical cylinders with compressed air. The cartridge is inserted into the flame arrester, the cylinder is rotated left or right, a valve opens inside it and compressed air pushes warheads into the barrels. But since they enter into them very tightly, the air from the trunks just bleeds through the holes in the valves, and the charges themselves reach the end of the trunks. 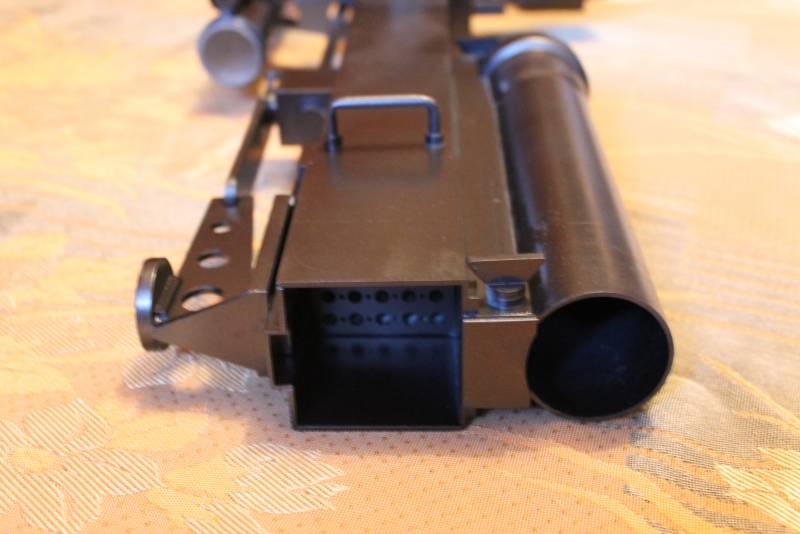 It now remains to raise the lever, the protrusion of which blocks the cartridge inside the flame arrester, and the air pressure that remains in the trunks will simply throw it away. The decision, as you see, is unusual, but there is nothing supercomplex in it. An ordinary magazine is replaced as follows: first, the empty one is removed (the magazine latch is pressed), after which a new magazine is inserted and the shutter is set. In this rifle, the handle turns to the side (the lock is removed inside the flame arrester, which otherwise does not allow the cartridge to be inserted), then the cartridge is inserted, the balloon is rotated to the stop, loading occurs, then the lock lever is released, the cartridge is automatically removed, and the shutter control handle put in the "forward" position. That is, the number of movements is about the same. 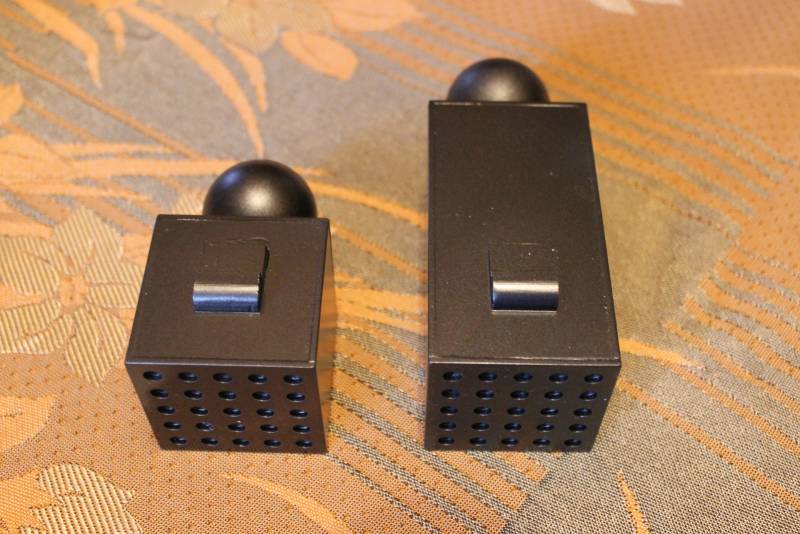 Two cartridges. View of the latch. 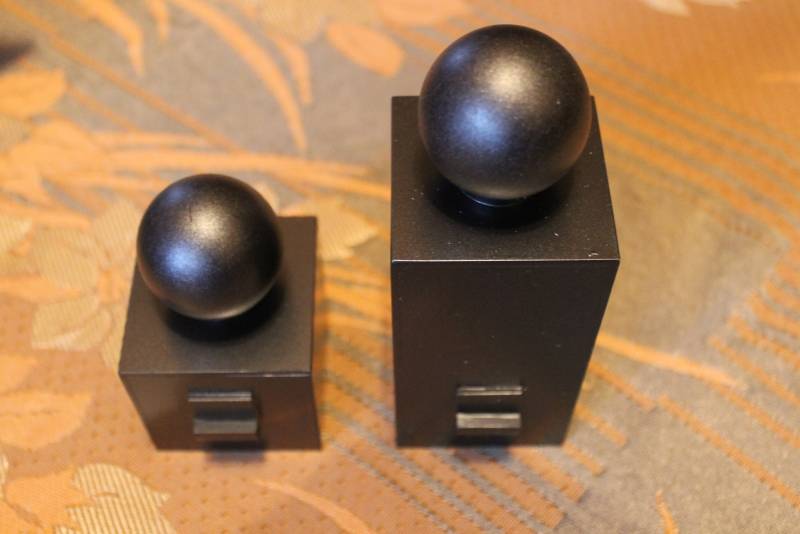 Two cartridges. View from above. 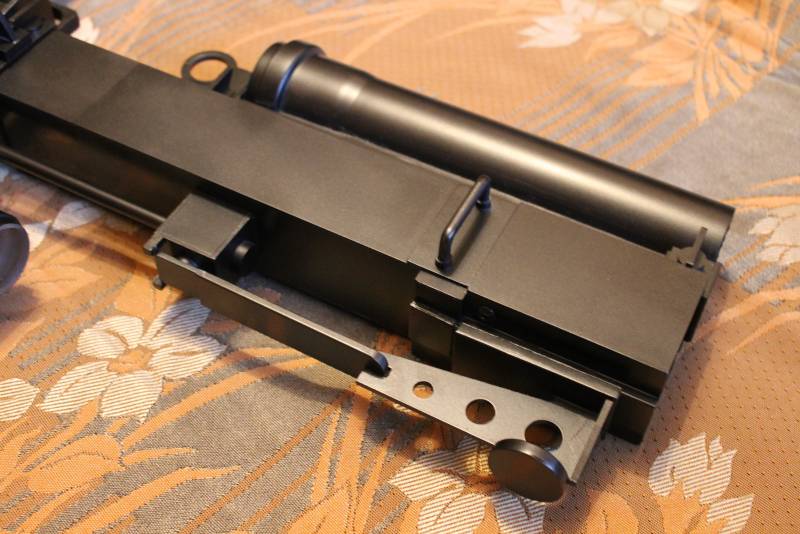 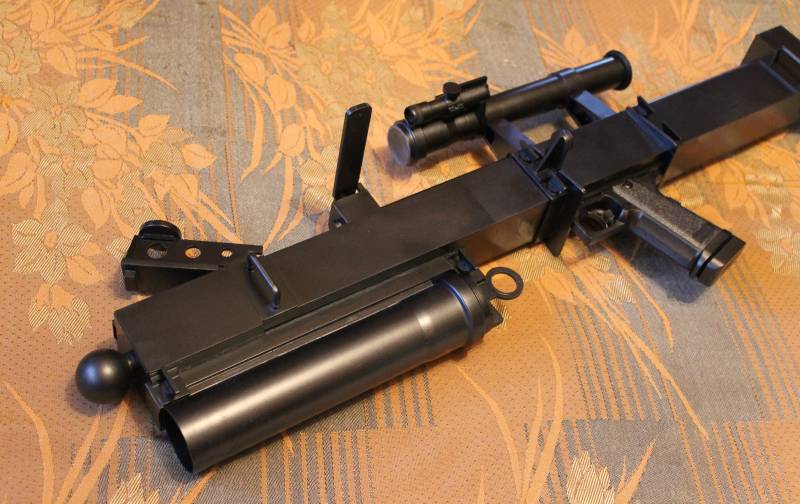 The shutter control is in the “left” position. Cartridge lock raised. Now, according to the idea, the air pressure will throw an empty cartridge out of the flame arrester receiver. 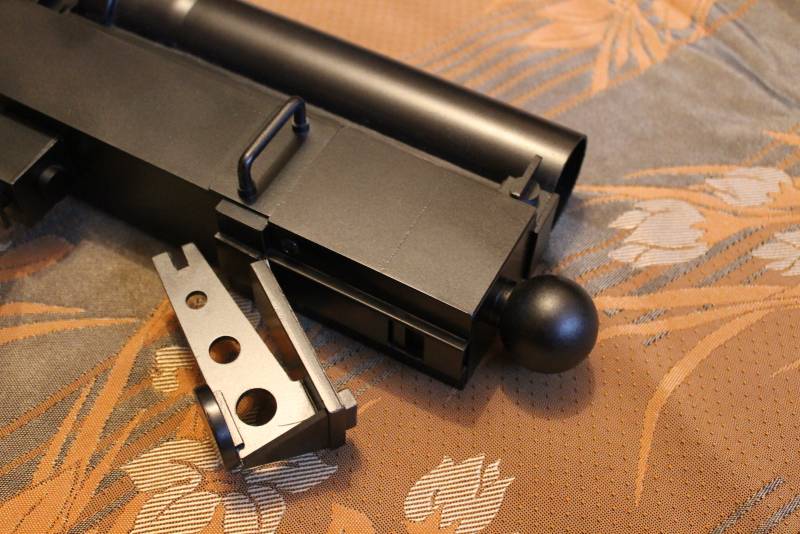 That's the whole "mechanics" of the recharge system ...

Author:
Vyacheslav Shpakovsky
Articles from this series:
Prospective weapons of the XXI century: what they can be?