Syrian Army Day - the main force in the fight against terrorism 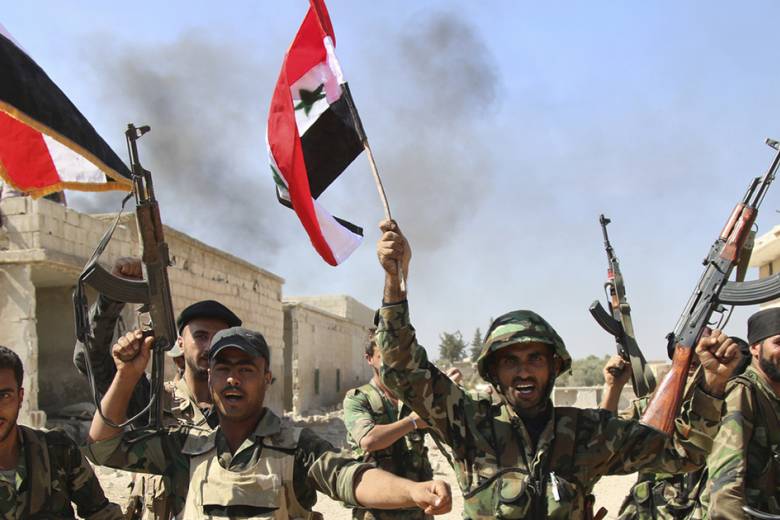 It so happened that the army of the far from largest, richest and most influential state became the main fighter against terrorism. Probably, this state can even be called small - but today it is truly great, because its army and people are waging an unequal battle with global evil. The great Western powers can no longer recognize the danger of the evil that terrorism carries, but their “struggle” against this very terrorism is declared only in words. At the same time, the courageous warriors of the Syrian army defeat thugs after defeat.

Yes, the Syrian army bears terrible sacrifices in this fight. Yes, there are not always victories - you have to retreat and lose your regained one. However, the wounded and suffering Syria has not been broken for more than five years of an undeclared war.

Many say that at present the main role in the fight against anti-Syrian terrorists is not played by the Syrian army, but by the Russian HQs. However, not minimizing the role of Russia, sacredly honoring the memory of those who died far from home, in an ancient and hot country, it should be noted that in order for the help of the Russian Federation to be possible, Syria itself had to hold out. Otherwise, by the autumn of 2015, there would be no one to help. And she lasted.

1 August The Syrian Arab Army celebrates the 71 anniversary of its formation. Notes again under the roar of fierce fighting and under the tears of mothers, seeing off the fallen soldiers on their last journey.

In 1946, Syria gained complete independence from France, and the colonial troops left the country. In the same year it was announced the creation of the Syrian army. Its core consisted of those people who for many years fought against the French colonialists.

Before the liberation of Syria, the so-called “special forces of the Levant” acted on its territory, as well as on the territory of Lebanon (formerly part of Syria and also controlled by the French at the time). These forces were led mainly by French officers. As you know, during World War II, in 1940, France was defeated, and the pro-fascist Vichy regime came to power. And this very “Levant special forces” was the backbone of the Vichy government in the Middle East.

In June, French anti-fascists, led by General de Gaulle, 1941, together with the British allies, carried out a military operation "Exporter" in Syria and Lebanon to deprive the Vichy regime of colonies, and the fascists - the supply of oil. Already in July of the same year, the forces opposing fascism occupied the entire territory of Syria and Lebanon.

A significant role in the victory of the Allies was played by the factor that General de Gaulle promised Syria and Lebanon independence. Therefore, the fighters against colonialism supported the anti-fascist forces, which made a considerable contribution to the success of the operation.

Even the rather progressive Charles de Gaulle subsequently tried to break his promise and save the lands of Syria and Lebanon under the direction of Paris. 29 May 1945, it even reached the two-day bombing of Damascus after the Syrian parliament refused to raise the French flag ... But still France had to keep its word (including - and under pressure from the USSR). After Syria gained independence, its army was formed from the forces that opposed colonialism (and against fascism), as well as from the remnants of the “special forces of Levant”.

And now, after 71, a year after its creation, the Syrian Arab army again fights against neocolonialism and new fascism. Yes, precisely because the current holy war against terrorists, supported by the leading NATO countries, is in fact a struggle with their masters, who largely follow the policy of Hitlerism.

And the owners, meanwhile, are extremely dissatisfied with the successes of the Syrian army in the city of Aleppo. Although the Syrian people think very differently.

28-29 July residents of this long-suffering dilapidated city came out to celebrate the liberation of important neighborhoods - Beni-Zeid and Al-Lermon. Thousands of crowds with the Syrian national flags expressed great joy at the fact that now the militants will not conduct mortar shelling of residential areas from Beni Zeid, which the terrorists used as a springboard. Aleppchane suffered enough. As the head of the Aleppo Medical Department, Muhammad Hazzuri, stated, over 10 thousands of civilians died during the 4 year due to these attacks, and many more were disabled.

At present, Russia, with the assistance of the Syrian army, is conducting a humanitarian operation in Aleppo. The Russian Center for Conciliation of Warring States has opened several humanitarian corridors. Civilians whom the militants held as “human shields” as well as the militants themselves who wished to lay down weapon.

Although the operation to open humanitarian corridors is carried out at the call of the United Nations, Washington is clearly not in favor of it. US authorities see it as an “attempt to deceive”. They are afraid that the decisive operation will begin on the complete liberation of Aleppo from terrorists.

US Secretary of State John Kerry said that there is a risk of termination of cooperation between Moscow and Washington if this operation turns out to be a hoax and if the assault begins.

Still, despite all the statements about the need to combat terrorism, the States are afraid of cleaning one of the most important cities of Syria from terrorists.

Presumably, numerous talks about “good” and “bad” terrorists will again be used. About "radical" and "moderate".

Recently, these very "moderate" have committed a crime, which is quite similar to the fact that they do the most radicals by handwriting. A teenage boy, a Palestinian by nationality, was first beaten and humiliated, and then his head was cut off. The process of bloody execution was captured on video. This was done by the “Nureddin al-Zinki” group, which is supported by the United States and is considered “moderate opposition”.

Earlier, the Syrians were joking: “How do radical terrorists differ from moderates? That radical cut heads, and moderates kill in other ways ".

However, now the moderates are seen in the fact that they are commonplace murderers and thugs. No better than LIH (banned organization in Russia).

The United States tried to justify itself, that due to this crime they would correct their position, stop cooperating with this group, but these promises were forgotten the next day. And now Washington is afraid that the accomplices of these goons will be knocked out of Aleppo. It is not surprising - even the monstrous case, when the “moderate oppositionist” from Homs committed an indicative act of cannibalism in 2013, did not force the United States to renounce its bloody dolls.

And it was the Syrian army that punished the murderers of a Palestinian boy. The leader of the group named Omar Salza was destroyed during a special operation, the group itself suffered serious damage.

So we wish the army of Syria to continue to clear the planet of nonhumans, sadists, thugs, hiding behind opposition slogans and enjoying the patronage of neo-colonialists and neo-fascists. Let's honor the memory of all the soldiers who died in this fight.