Russian scientists have learned to create microresonators with high precision

July 29 2016
64
Mikhail Sumetsky, Professor, University of Aston (England), and Research Engineer at ITMO University (St. Petersburg National Research University of Information Technologies, Mechanics and Optics) Nikita Toropov created a practical and inexpensive technology for the production of optical microresonators with record high precision today. Microresonators can be the basis for the creation of quantum computers, on this past Friday, July 22, reported the popular science portal "Attic" with reference to the press service of ITMO.

The relevance of the work in the field of creating quantum computers today is due to the fact that a number of very important tasks cannot be solved using classic computers, including supercomputers, within a reasonable period of time. We are talking about the problems of quantum physics and chemistry, cryptography, nuclear physics. According to scientists, quantum computers will become an important part of the distributed information and computing environment of the future. Building a quantum computer in the form of a real physical object is one of the fundamental tasks of physics of the 21st century.

A study of Russian scientists on the production of optical microresonators was published in the journal Optics Letters. “The technology does not require vacuum installations, it is almost completely free from processes that are associated with the treatment with caustic solutions, while it is relatively inexpensive. But the most important thing is that this is another step towards improving the quality of data transmission and processing, the creation of quantum computers and ultra-sensitive measuring instruments, ”the ITMO University press release said. 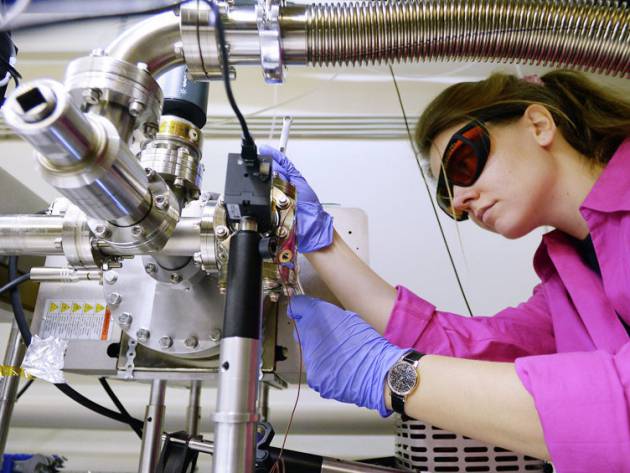 An optical microresonator is a kind of light trap in the form of a very small, microscopic thickening of an optical fiber. Since photons cannot be stopped, it is necessary to somehow delay their flow in order to encode information. This is precisely what optical microcavity chains are used for. Due to the “whispering gallery” effect, the signal slows down: when it hits the resonator, the light wave is reflected from its walls and twists. In this case, thanks to the round shape of the resonator, the light can be reflected for quite a long time inside it. Thus, photons move from one resonator to another with a significantly lower speed.

The trajectory of light can be adjusted by changing the size and shape of the resonator. Considering the size of microresonators, which is less than a tenth of a millimeter, the changes in the parameters of such a device must be ultra-precise, since any defect on the surface of the microresonator can cause chaos in the photon flux. “If the light turns for a long time, it begins to interfere (conflict) with itself, - emphasizes Mikhail Sumetsky. - In the event that an error was made in the manufacture of resonators - confusion begins. From here we can draw the main requirement for the resonators: the minimum deviation in size. "

Microresonators, which were made by scientists from Russia and the UK, are made with such great accuracy that the difference in their sizes does not exceed 0,17 Angstrom. To imagine the scale, we note that this value is approximately 3 times smaller than the diameter of a hydrogen atom and immediately 100 times less than the error that is allowed in the production of such resonators today. Especially for the production of resonators, Mikhail Sumetsky created the SNAP method. According to this technology, the laser anneals the fiber, removing the voltage frozen in it. After exposure to a laser beam, the fiber slightly “swells” and a microcavity is obtained. Researchers from Russia and England are going to continue to improve the technology SNAP, as well as to expand the range of its possible application. 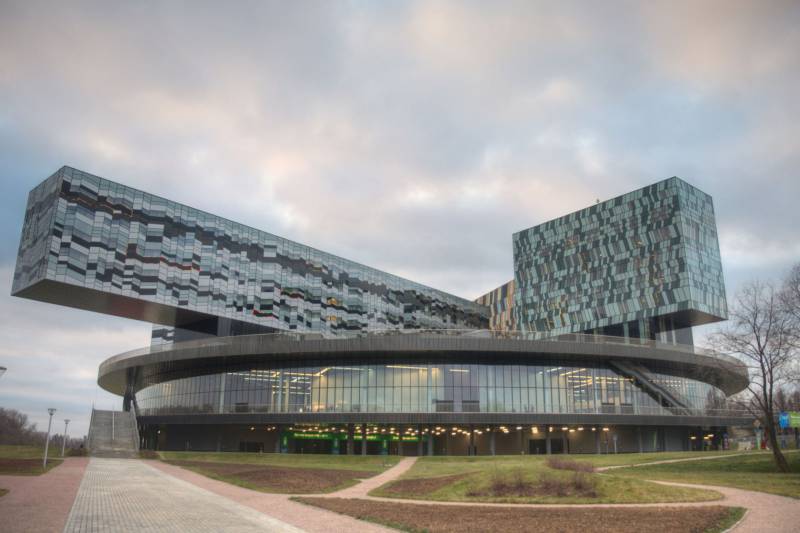 Work on microresonators in our country has not stopped for the past few decades. In the Moscow region village of Skolkovo, a new house was built at #100 on Novaya Street. This is a house with mirrored walls that can compete with the sky with its blue. This is the building of the Skolkovo School of Management. One of the tenants of this unusual house is the Russian Quantum Center (RCC).

Microresonators today are quite a relevant topic in quantum optics. Several groups around the world are continuously studying them. In this case, initially optical microresonators were invented in our country at Moscow State University. The first article about such resonators was published in 1989 year. The authors of the article were three physicists: Vladimir Braginsky, Vladimir Ilchenko and Mikhail Gorodetsky. At the same time, Gorodetsky at that time was a student, and his leader Ilchenko later moved to the USA, where he began working in the NASA laboratory. In contrast, Mikhail Gorodetsky remained at Moscow State University, having devoted many years to the study of this sphere. He joined the RCC team relatively recently - in the 2014 year, at the RCC, its potential as a scientist can be revealed more fully. For this, the center has all the equipment necessary for the experiments, which is simply not available at Moscow State University, as well as a team of specialists. Another argument, which Gorodetsky led in favor of the RCC, was the ability to pay decent wages to employees.

Currently, the team of Gorodetsky employs several children who previously engaged in scientific activities under his leadership at Moscow State University. At the same time, it is no secret to anyone that it’s not easy to keep promising young scientists in Russia today - the doors of any laboratories around the world are open to them these days. And the RCC is one of the opportunities to make a brilliant scientific career, and also to receive an adequate salary without leaving the Russian Federation. At present, research is being conducted in the laboratory of Mikhail Gorodetsky, which, with favorable developments, will be able to change the world. 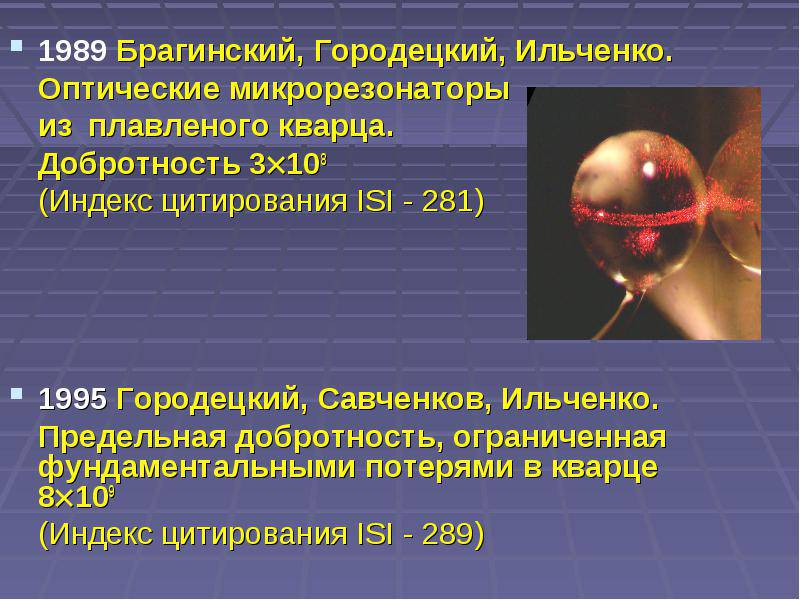 Optical microresonators are the basis of a new technology that is able to increase the density of data transmission over fiber optic channels. And this is only one of the possible applications of microresonators. Over the past few years, one of the RCC laboratories has learned to produce microresonators, which are already being acquired abroad. And Russian scientists, who previously worked in foreign universities, even return to Russia to work in this laboratory.

According to the theory, optical microresonators could be used in the telecommunications sector, where they would help increase the density of data transmission over an optical fiber cable. Currently, data packets are already being transmitted in a different color range, but if the receiver and transmitter are more sensitive, then it will be possible to branch one data line to an even greater number of frequency channels.

But this is not the only area of ​​their application. Also, with the help of optical microresonators, it is possible not only to measure the light of distant planets, but also to determine their composition. They can also allow you to create miniature detectors of bacteria, viruses, or certain substances - chemical sensors and biosensors. Mikhail Gorodetsky described such a futuristic picture of the world, in which microresonators are already used: “With the help of a compact device based on optical microresonators, it will be possible to determine the composition of air exhaled by a person, which carries information about almost all organs in the human body. That is, the speed and accuracy of diagnosis in medicine can increase simply many times. ” 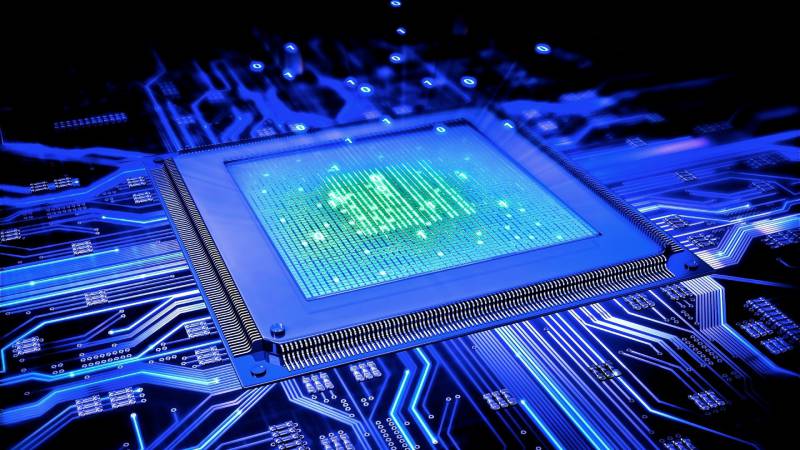 However, for now these are just theories that still need to be tested. Before the finished devices built on their base, still far. However, according to Mikhail Gorodetsky, according to the approved plan, his laboratory should come up with a couple of years later how to use microresonators in practice. Currently, the most promising direction is the sphere of telecommunications, as well as the military sphere. Microresonators can really interest and the Russian military. For example, they can be used in the design and production of radars, as well as stable signal generators.

So far, mass production of microresonators is not required. But a number of companies in the world have already begun to release devices using them, that is, they were really able to commercialize their products. However, we are still talking only about piece machines designed to solve a narrow range of tasks. For example, the American company OEWaves (in which Vladimir Ilchenko, one of the inventors of microresonators works today), is engaged in the production of ultra-stable microwave generators, as well as excellent lasers. The laser of this company, issuing light in a very narrow range (up to 300 Hz) with very small phase and frequency noise, has already won the prestigious PRIZM award. Such an award is practically an Oscar in the field of applied optics, this award is given annually.

In the medical field, the South Korean group of companies Samsung, together with the Russian Quantum Center, is engaged in its developments in this field. According to the publication Kommersant, these works in the 2015 year were at a very initial stage, so it’s too early and premature to say something about inventions that would have applied applications.