The National Interest: why is America and the whole world afraid of Soo-27

July 27 2016
52
Many domestic developments in the field of armaments and military equipment are commendable, and therefore regularly receive the most positive ratings. Most often, for obvious reasons, domestic weapon and the technique is praised by experts and amateurs from our country. Nevertheless, some samples are awarded approval by the results of evaluations by foreign experts. Consider one of the examples of this attitude to the Russian technology.

July 22 The American Interest published the American edition of Robert Farley’s “Russia's Russia's F-15 Killer: Why America (and the World) Fears the Su-27 Flanker” (“Russian killer F-15: why America (and the whole world) is afraid of 27 ”). The subtitle of the material says: "It was the best plane - it was the best aircraft of the USSR, and it can still be dangerous." As is clear from the title of the article, its topic was a close examination of one of the most successful Russian fighters. The American author, having studied the question, came to very interesting conclusions. 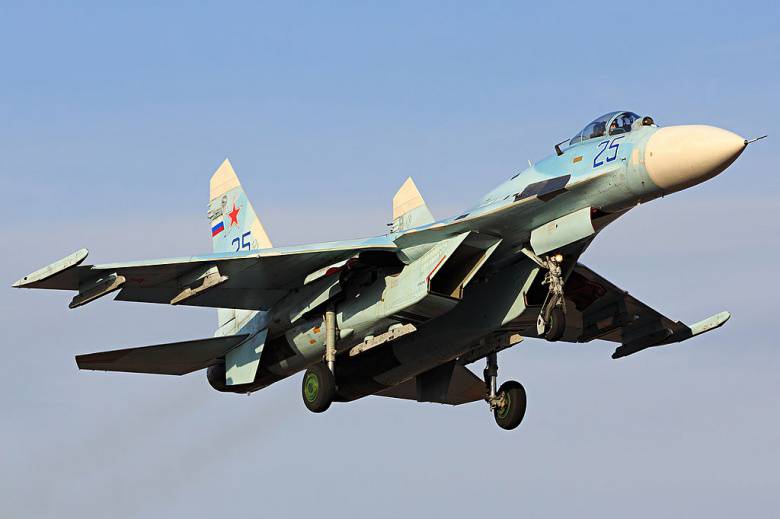 In the eyes of the West, as R. Farley writes, most of the legendary Soviet planes of the Cold War were designed by the design bureau A.I. Mikoyan and M.I. Gurevich. This organization created the MiG-15, MiG-21, MiG-25 and MiG-29 fighters, which in the NATO classification have the code names Fagot, Fishbed, Foxbat and Fulcrum, respectively. At the same time, the best Soviet Cold War fighter was created by another design team. The Su-27 project was developed by the P.O. Dry.

Su-27 (according to the NATO classification - Flanker) was created as a means of gaining superiority in the air. In the event of a conflict with NATO, such aircraft were supposed to destroy the American aviation equipment over Central Europe. In addition, their task was to patrol in the border areas in order to intercept the attacking enemy bombers. Su-27 survived the end of the Cold War, and soon became one of the leaders in the international market for fighter aircraft.

The author of The National Interest reminds that the Su-27 project emerged as part of a large and complex program that involved the parallel creation of heavy and light fighters of various types. Similar views on the development of fighter aircraft dominated the United States and the USSR in the seventies and eighties of the last century. The result of this approach was the emergence of several types of aircraft. The US industry has created the F-15 and F-16 fighter for the air force, as well as the F-14 and F / A-18 for the naval carrier aircraft. In the Soviet program of developing new technology, the role of a light fighter was assigned to the MiG-29 aircraft. Heavy aircraft with higher performance became Su-27.

R. Farley believes that the Su-27 project was developed taking into account the available information about the American F-15 Eagle project. As a result, the aircraft appeared, having a certain similarity with its foreign competitor. Su-27 and F-15 have high speed and long range, and also carry quite powerful weapons. At the same time there are noticeable differences in the design. The American fighter looks like it was “well fed”, and the Soviet plane is different “hungry view”.

Despite the initial goals of the project, which implied the creation of a fighter to achieve superiority in the air, the Su-27, like the F-15, later mastered the job of intercepting and striking ground targets. On the basis of the original fighter in the future, the firm "Sukhoi" created several versions of specialized aircraft designed to solve specific combat missions.

Unlike the F-15 and the MiG-29, in the early stages, the Su-27 project faced certain difficulties, which led to a serious delay in the main works. There have also been tragedies: the tests of the new aircraft took the lives of several pilots. It was only in the mid-eighties that the car was able to be brought to service in the military, although some problems continued to haunt it after that. Finally, the end of the Cold War, the collapse of the Soviet Union and the characteristic problems of that time led to a sharp reduction in orders for the construction of serial equipment.

The American author notes the high characteristics of the Soviet / Russian fighter. The maximum speed of the Su-27 reaches M = 2,35, and the ratio of engine thrust and take-off weight, depending on the amount of fuel and load, can exceed one. The pylons under the wing and fuselage can accommodate up to eight short-range or medium-range air-to-air missiles. Long-range missiles are included in the ammunition of some modifications of the fighter. Also, the aircraft can carry bombs and unguided rockets of various types. Under the control of an experienced pilot, the aircraft is able to perform various maneuvers and aerobatic maneuvers, which has been repeatedly demonstrated at numerous Russian and foreign aviation equipment exhibitions.

Over time, it turned out that the Su-27 is very successful and flexible in terms of the use of a platform for creating specialized aircraft. To date, the Russian Aerospace Forces have a fleet of vehicles consisting of various models and modifications of aircraft based on the Su-27, designed to solve various combat missions. With the help of modern electronic equipment, aircraft improve their ability to attack air and ground targets. Some variants of the Flanker fighter even stand out in separate models.

Su-27 early modifications, despite their considerable age, are still of interest to operators. Such equipment is now used by 11 air forces of the world. The largest fleet of such equipment is available in the VKS of Russia - 359 machines. Another 59 units are available from the air forces of the People’s Liberation Army of China. R. Farley notes that in some cases, Su-27 aircraft are in service with both countries involved in "smoldering conflicts." To such conflicts, the author attributes the notorious “war” of Russia and Ukraine, as well as the Ethiopo-Eritrean conflict and the differences of Vietnam and China. In total, according to the calculations of the American author, customers were supplied 809 Su-27 aircraft of the first model. There are also numerous contracts for the supply of modifications and new equipment based on the existing platform.

Separately, R. Farley mentions events that have evolved around the supply of Russian aircraft to China. A relatively long time ago, the Chinese army purchased from Russia a number of ready-made Su-27 aircraft. In addition, there were agreements on the joint production of machinery and the license to assemble fighters on their own. Subsequently, the Russian side accused the Chinese partners of violating the terms of the existing agreements. The reason for the charges was the equipment of aircraft J-11 (Chinese designation of fighters), electronic equipment produced in China. In addition, the Chinese industry assigned some Russian developments, which were later used in the new project J-16. Disagreements persisted for a long time, but by now the situation has returned to normal thanks to the continuation of military-technical cooperation between the two countries.

R. Farley believes that Su-27 fought quite a bit for such a famous and remarkable aircraft. However, such fighters had to perform combat missions in several theaters of operations around the world. During this combat operation, aircraft were mainly used to gain air superiority. First of all, this technique was involved in conflicts that accompanied the collapse of the Soviet Union. In addition, the American author claims that Su-27 is used in the "wars of Russian reconsolidation", in particular by both parties to the conflict in Ukraine. Also, the Su-27 of the Russian VKS, as well as machines based on them, are involved in the current Syrian operation.

Abroad, Su-27 had time to participate in the Angolan civil war and the conflict between Ethiopia and Eritrea. It is to the last war that occurred at the turn of the nineties and the two thousandth, are the only known air victories of the Su-27 over enemy aircraft. Ethiopian pilots shot down three Eritrean MiG-29.

The Soviet / Russian Su-27 was the last of the "main" fighters of the fourth generation, put into service and put into mass production. During the tests and service, these aircraft showed how successful the project turned out to be. The planes turned out to be quite large and relatively powerful, which allows them to continue their modernization and production for a long time. Such features of the original project and developments based on it look particularly important in light of the recent problems of the Advanced Aviation Complex of Frontal Aviation (PAK FA or T-50). In the future, the PAK FA will have to replace both the Su-27 with its modifications and the MiG-29. In the meantime, Su-27 and its modifications are the basis of the Russian fighter aircraft.


The article “Russia's F-15 Killer: Why America (and the World) Fears the Su-27 Flanker”:
http://nationalinterest.org/feature/russias-f-15-killer-why-america-the-world-fears-the-su-27-17082