July 18 2016
28
Well, it happened. Ukraine finally revealed its cards! The Verkhovna Rada made amendments to the Law "On the Armed Forces of Ukraine". Changes concerning the most hidden part of the army - the Special Operations Forces. Yes, and all the APU, too. 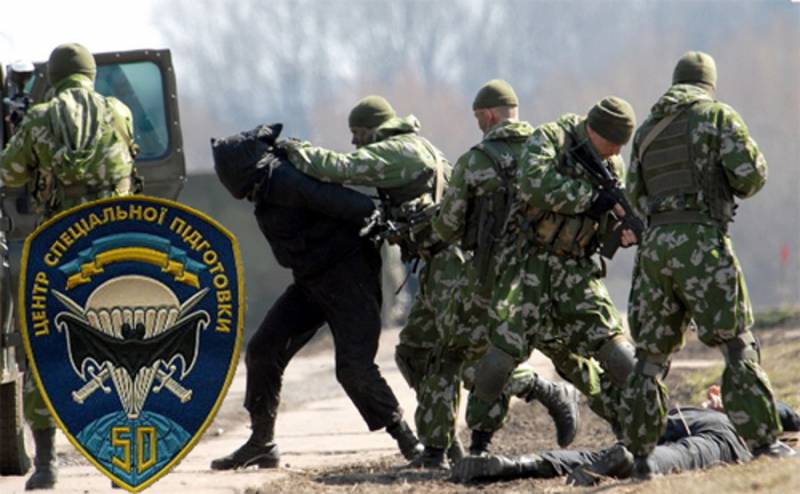 "The amendments provide that the Armed Forces of Ukraine may be involved in the implementation of measures of the legal regime of martial law and emergency situations, the conduct of military information and psychological operations, the fight against terrorism and piracy, measures to protect the life and health of citizens and state property (property) outside Ukraine.

The document also provides for the involvement of the Ukrainian Armed Forces to strengthen the protection of the state border, protect the sovereign rights of Ukraine in its exclusive (maritime) economic zone and continental shelf, ensure the safety of national maritime navigation on the high seas or in any place outside the jurisdiction of any state, spread prevention weapons mass destruction, countering the illegal transportation of weapons and narcotic drugs, the provision of military assistance to other states.

In addition, they can participate in international military cooperation, international anti-terrorism, anti-piracy and other operations to maintain peace and security. "

Moreover, it was especially emphasized that the law was developed in accordance with NATO standards. What, in particular, was stated by a member of the BP Committee on Security and Defense Irina Freese.

"The bill was developed according to NATO standards."

So many words and speeches on various patriotic get-togethers for help in the fight against Russia. But in fact? But in fact, the APU will now "plug holes" in places where normal countries will not send their citizens.

Another important milestone was the law on amnesty passed by 7 for “heroes of the ATO” for any crimes committed in the area of ​​operation. The media today talk about crimes against civilians. About robbery, rape, torture and other horrors. But in this article we are interested in the other side of this law. And the focus of these publications is precisely on punitive battalions. The APU seems to remain in the consciousness of the majority "white and fluffy."

The law practically allows any actions in the frontal territories. The main thing is to explain this with military necessity. The soldier or officer of the APU is no longer limited. In war as in war.

In this regard, the communication of messages that have long been appearing in the media has become more and more noticeable. Moreover, the messages are not only in UkroSMI, but also in Western and Russian editions. More and more often, authors write about the appearance of the mysterious "rembo" in the Ukrainian army. The secrecy regime, which for such units exists in all countries, in Ukraine for some reason is sometimes violated. "Leaks", and that's it.

To talk about the "zeal" of Ukrainian journalists and the "long tongues" of soldiers from such units is silly. Try to talk ordinary riot police in your city. Believe me, psychological training, supported by relevant laws and instructions, is better than any stimulus to talk.

However, the information all appear and appear. Authors are actively writing. An image of invincible soldiers is being created, of which there are few, but they can solve any task. By the way, and our television helps it. Remember the invincible sea saboteurs or Russian special forces from the series.

For Ukraine, it is very important today to win the information war. At least in a small battle.

So, for two years now, here and there, there is information about secret training centers for super-soldiers. These are the 140 training center in Khmelnytsky, the training center of the Airborne Troops of the Ukrainian Armed Forces in Zhytomyr and others. US and NATO funds are poured into these centers. And instructors from several countries work there. USA, UK, Poland, Lithuania. Saw and other foreigners.

Who are these centers preparing? And why today there is so much talk about these supermen in uniform?

Zhytomyr is not really interested in us. Although, precisely there, as it seems to me, they prepare the very "rembo". It is there that scout saboteurs are trained to work individually, in isolation from the main forces. And the cover at the center is gorgeous. Training Center for highly mobile amphibious troops.

So, if, of course, the information is correct, after a year and a half, really serious fighters will appear on the contact line. But they will not fight in the trenches and roadblocks, but in the deep (as far as possible) rear of the Republicans.

That is why a little more attention is paid today to the 140 Training Center of the Special Operations Forces of the Ukrainian Armed Forces. Tom scared secret that is located in Khmelnitsky.

In Soviet times there were several military intelligence units on the territory of modern Ukraine. Including the sea. The presence of virtually any terrain, sea, climate created excellent conditions for military training of special forces soldiers.

But after the separation of Ukraine, after the emergence of a new independent state, these units, like all the APU, were in the pen. The Soviet experience was not needed independent Ukraine. And the preparation of an elite fighter is a rather expensive business. Naturally, the professionals who did not stay in Ukraine did not need it either. No matter how silly it sounds, but "loot defeated evil."

Only in 2007, the president of Ukraine announced the creation of the Special Operations Forces (MTR). It was then that the 8 training center MTR was created on the basis of the 140 separate special-purpose regiment. Officially, this unit consists only of officers. The strength of the whole 70 man. 8-10 full-fledged battle groups and reserve. But, the figures, you know, are quite conditional.

Beautiful title and weak preparation. But this did not prevent the center fighters from participating in the international forces in a number of operations. Only according to open data, such operations were of the order of 20. The tasks that were entrusted to the Ukrainians were mostly not combat.

But after the next Maidan, when the fighting began in the Donbas, attention to the MTR increased dramatically. The real fighting showed the weakness of Ukrainian specialists. Today 5 is officially known for the dead fighters. Agree, for a small division, the losses are huge.

It was at this time that the Ukrainians turned to the United States and Great Britain for help. It was at this time that American Rangers appeared on the territory of the country. For those who are not particularly interested in the composition of the US Army, these units are engaged in in-depth reconnaissance. 180 instructors with excellent knowledge of the Russian language and combat experience became instructors at the center of the SSO and other centers. In addition, there were British and Baltic specialists.

Preparation of a scout saboteur to work in the frontline zone lasts from six months to a year. After that, we can already talk about its intended use.

A year ago, we conducted an investigation into the death of Aleksei Brain. The versions that were then put forward were considered by specialists in the field of precisely such work, specialists from the Ministry of Internal Affairs, specialists from other special services. And they all noted the high professionalism of sabotage. Reasonableness not only of the operation itself, which, in principle, can also be made by an ordinary intelligence officer, but also by means of escape and exit from the search zone.

Similar operations were carried out in the same way. I recall the death of Bednova (Batman), Dremova. There the conclusions were exactly the same. In all cases, the investigation rested on the inexplicable disappearance of saboteurs. Even then, we put forward a version of the work of "foreign experts." These were "practical exercises" for the "students" of the center.

Confidence in the correctness of the findings was confirmed by recent events in the ATO zone. Motorola car bombing at the Republican Trauma Center, attempted Machete, killing Dawn. But this is the legendary Republican commanders. And their protection was organized fairly tightly.

Why exactly today is the activation of the SSO units? The purpose of these sabotage is already clear. More precisely, the goal. First of all, the destruction of the most prominent and authoritative Republican commanders. That in the conditions of aggravated conflict inevitably causes some loss of combat effectiveness of the unit. The new commander does not always immediately understand the position not only on the line of contact, but also the internal communications of commanders and fighters.

And the second, more important part of the work, is to sow panic in the rear of the Republicans. It is difficult to fight in an environment where it can “blabhnut” in the rear at any moment. And the absence of the guilty causes distrust of the neighbors. Simply put, troops on the front line lose their morale. There is a demoralization of fighters. There is a fear that you can just quit.

Add to this the video of interrogations such "abandoned" on the Internet. For example, those sappers that captured in Shirokino. The result will be very unpleasant.

There is another task that graduates of the 140 center of the SSO will begin to perform in the event of the onset of the onset of the APU. In Kiev, sure. that there is a certain layer among the population of Donbass, which for various reasons is ready to start a guerrilla war. These people today are in a "sleeping" state. There are no commanders, no prospects of victory in the struggle against the people's republics.

But the very first successes of the Armed Forces of Ukraine, the intensification of military operations along the entire contact line will push them into the hands of professionals. Guerrilla units will be formed. And this is a huge “concern” for Republican MGB today.

In general, informational stuffings about Ukrainian specialists-saboteurs are designed for the weak nervous system of the population. MTR in Ukraine is. Moreover, the MTR in Ukraine has already begun to work. However, to draw conclusions from this about the imminent defeat of the Republicans is not worth it.

Such units have operated and are acting on both sides since the beginning of the conflict. Previously, most of the fighters belonged to Western military companies or veterans of the Soviet and Russian army. Today, Ukrainian fighters have joined this line. That’s all.

And the loss of such units carried and carried. This is the movie opponents "rembo" - idiots who point-blank can not get from the machine. The fighters who have been in war for years are well aware of the danger and the obligation to shoot straight. So 140 center graduates are already waiting. One dead "hero" more, one less. The difference is not great.