July 11 2016
45
The Red Army at the beginning of World War II had more than 23 thousand tanks different types. The technical condition of these machines was also different. The start of the war, catastrophic for the USSR, and the series of defeats of the summer-autumn of 1941 seriously mowed down the Soviet tank fleet. By the beginning of the counterattack near Moscow, the Red Army managed to assemble only 774 tanks, of which only 222 were heavy and medium.


Light tank T-60, on the basis of which they then tried to create an upgraded version of T-45, did not appear from a good life. The plans of the military was the launch into mass production of the light tank T-50, which, by a set of tactical and technical characteristics, was a very worthy fighting vehicle, but during the war the Soviet industry was not able to master its production. In peacetime, having spent some time, the tank would have necessarily launched into the series, but the country had no more peacetime.

In such an environment, when the T-50 never went into the series, and the Soviet tank units suffered huge losses in battles with the aggressor, the light tank T-60 was born. This light tank was developed after the start of World War II. It was the result of a deep modernization of the light tank T-40, which was conducted by the design bureau under the direction of N. A. Astrov. The tank differed from its “donor” in better armor protection and more powerful weapons - the 20 automatic cannon (TNSh-20 or ShVAK). For the first time on the tank was used a device for heating in the winter time of the engine coolant. 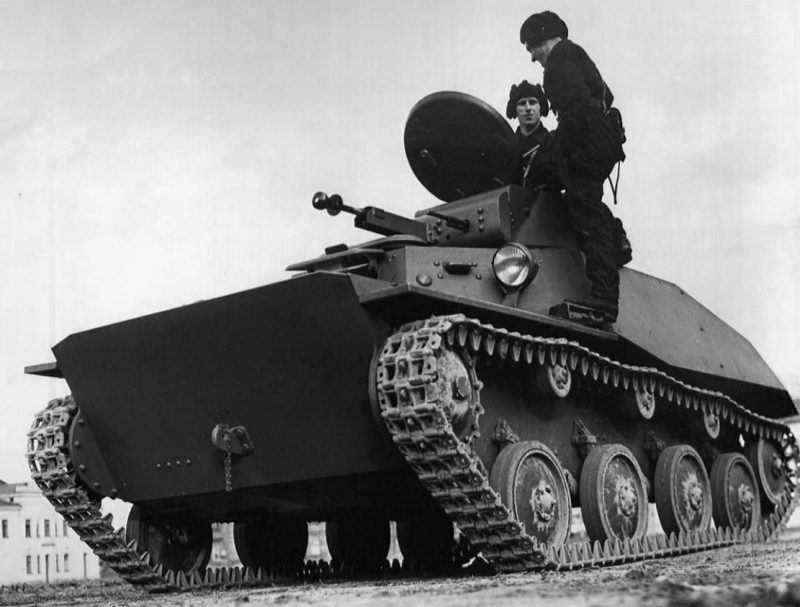 In the conditions of an acute shortage of tanks, the main advantage of the T-60 light tank was its simplicity of production in Soviet automobile factories with extensive use of automobile mechanisms and components. The tank was produced simultaneously in four factories. In addition, a BM-8-24 volley fire system with 24 guides for launching 82 mm caliber missiles was developed and mass-produced at its base. In a short time, the Soviet industry released almost 6 of thousands of these tanks, which played a very important role in the battles of the initial period of the war and in the battle for Moscow, when each armored unit was on the account.

In the course of mass production of the light tank T-60, attempts were made repeatedly to improve the performance of the combat vehicle — everyone was well aware that the combat value of the tank was very low. Soviet tank crews often called these vehicles BM-2 (a mass grave for two people), “suicide bombers”, and even “coffins”. Tankers did not complain about their poor booking and weapons, considering them easy prey for German tankers and anti-tank artillery. So in August 1941, the design office of the plant number 92 in the city of Gorky, on its own initiative, began to design a new ZIS-19 cannon, which was designed to arm a T-60 light tank. The new gun was an 37-mm cannon with a barrel length 66,7 caliber, with an initial velocity of the projectile - 915 m / s and ballistics from the 37-mm anti-aircraft gun 1939 model year. In this case, the ammunition used is the same as with the anti-aircraft gun. In October, the 1941 of the year began to develop here a variant of the ZIS-19BM gun - 45-mm cannon with a barrel length 46 of calibers with an initial velocity of the projectile 757 m / s. This gun was a further upgrade of the 45-mm tank gun 20K. 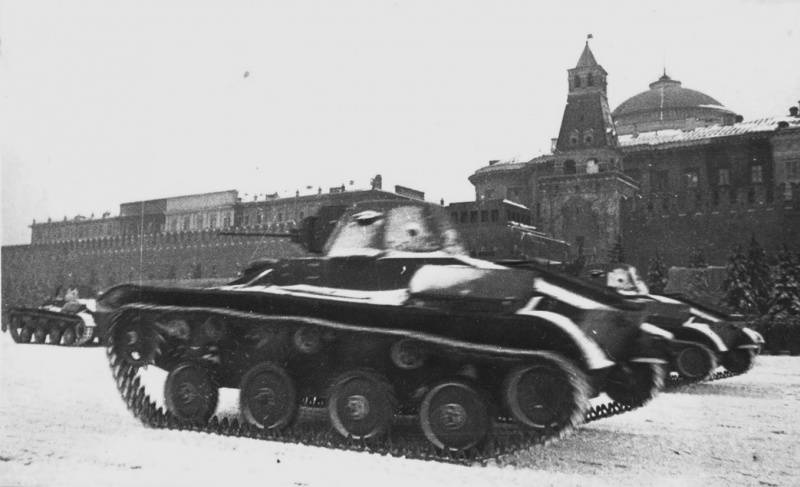 T-60 tanks during a parade on Red Square

According to the results of the tests (from the ZIS-19 gun, 826 shots were made) it was noted that the accuracy of the gun battle at the 2000 meters distance was unsatisfactory, at the 1000 and 500 meters distance, it was better than the table values ​​for the 37-mm anti-aircraft gun. A good rate of fire was also obtained - up to 10 rounds per minute without correcting the tip of the gun and 6-7 rounds per minute with adjustments to the tip. Along with this, the ZIS-19 gun had a low barrel durability, as well as a number of shortcomings in the operation of the tensioning mechanism and percussion mechanism. In addition, it was very difficult to fire from 37-mm guns placed in a standard turret of the T-60 tank because of the crowded turret and the unsuccessful positioning of the pickup mechanisms. In conclusion, it was noted that the ZIS-19 gun could not withstand a series of tests.

Attempts to strengthen the armament of the T-60 tank were also made at other Soviet factories. For example, at the Gorky Automobile Plant (GAZ) they produced a light tank T-60, armed with a 45-mm gun installed in the new turret, but on the old pursuit. At the end of 1941, a prototype tank model was made and tested by shooting, after which an order was issued for the construction of a similar tank, but from armored steel. However, in connection with the creation of the T-70 light tank, further work on the placement of 45-mm guns in the T-60 tank at GAZ was discontinued.

We worked on our project of a more advanced tank and in the design bureau of the plant No. XXUMX. Here, simultaneously with the testing of the ZIS-37 engine (the ZIS-16 forced engine with an aluminum piston and an aluminum head), in the shortest possible time were able to prepare a draft of a new light tank, which was designated as T-5. A combat vehicle made on the basis of the T-45 tank was proposed as an alternative to the other light tank T-60 of the GAZ plant. The explanatory note to the design of the T-70 tank, directed by the plant director No. 45 Milling and the chief engineer Martirosov to the SSTU KA from 37 May 20, contained the following information: 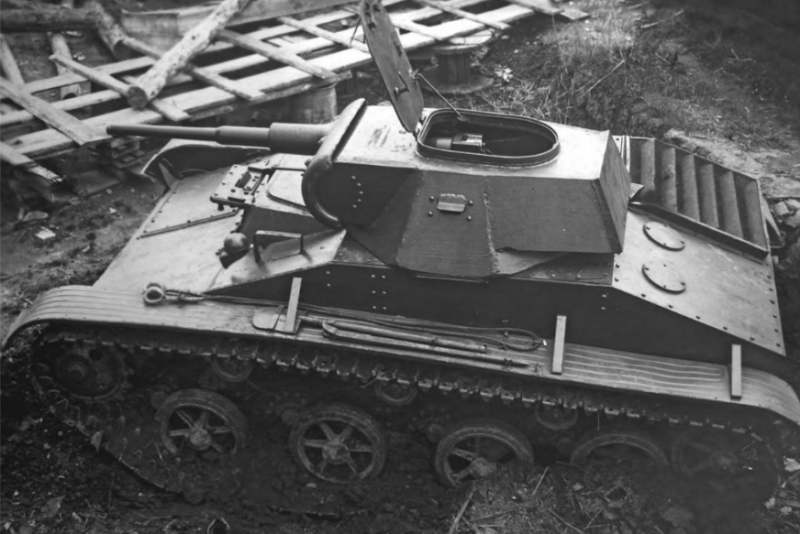 “In order to significantly improve the combat performance of the T-60 tank, preserve the mass production of this tank, facilitating an immediate transition to its production without reducing production volumes, the 37 plant based on the T-60 light tank designed and built a prototype called the T-45 . As a result, the company managed to create a single-engine tank with a more powerful power plant and the resolution of the issue of installing a reinforced version of weapons with almost equal tactical and technical characteristics with the T-70 tank and saving metal consumption for 2500 kg. "

The new tank had the same ammunition as the T-70. A new turret of a larger size was installed on it with an 45-mm cannon and an 7,62-mm DT machine gun paired with it. The tower was installed on the existing chase of the light tank T-60. Although the tower was enlarged, it still remained single. It was not possible to place a double turret on the T-60 tank hull, even using the more powerful ZIS-16 engine. At the same time, a simplified slewing mechanism of the turret of the T-60 tank and a regular lifting mechanism of the gun with a trigger device were used in the weapons installation. The successful arrangement of the controls and mechanisms of the new turret on the T-45 tank, as demonstrated by the tests, made it possible to significantly increase the rate of fire of the 45-mm guns, bringing the rate to 7-8 shots per minute against 4-5 shots per minute in the T-70 tank ( shooting was carried out from the scene). Simultaneously, the construction of the tower was simplified: instead of 233 parts of which the light tank tower T-60 consisted, the number in the turret of the T-45 tank was reduced to 141, and the new parts were only 46. At the same time, the thickness of the armor plates of the turret has grown from 25 to 35 mm.

The design of the hull of the light tank T-45 almost did not change compared with the tank T-60. There was only an increase in the thickness of the upper front hull sheet from 15 mm to 25 mm, and also the design of the mechanical drive hatch was changed. The modified hatch allowed the driver to leave the combat vehicle in any position of the turret. At the same time, the undercarriage of the T-45 light tank migrated to it from the T-60 tank unchanged. It consisted of 4-x support and 3-x supporting rollers, guide wheels and front-wheel drive wheels (on each side). 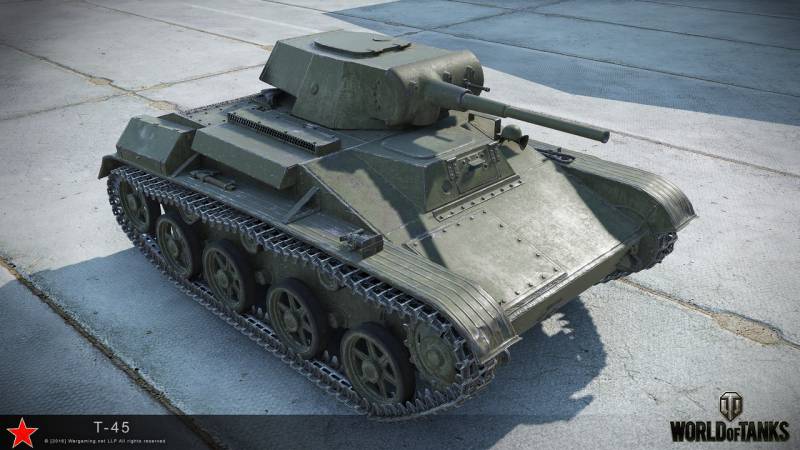 As a power plant on the T-45 tank, it was planned to use the ZIS-16 engine, which developed the power of the 85 HP. This motor was a forced version of the engine ZIS-5. The explanatory note, which was sent to the GABTU KA, noted: “The ZIS-16 engine is more reliable in operation than the GAZ-202 engine, and is able to work on the second grade of gasoline instead of the aviation one, which consumes GAZ-202. In the future, it is possible to further increase the power of the ZIS-16 engine. Further speeding up of the power plant will increase the fighting qualities of the T-45 tank against the T-70. Delivery of ZIS-16 engines from the Miass Automobile Plant named after Stalin is possible soon. ” However, in reality, the production of the ZIS-16 engine in Miass, where the engine production of the ZIS was evacuated, was not mastered.

The transition to the serial production of the light tank T-45, which was distinguished by improved characteristics compared to the T-60 and was not much inferior to the tank T-70, could be carried out at plant No. 37 in a short time, without reducing the production program of tanks, since the technological equipment production tank T-60 remained almost in full. However, as a result, the T-45 remained a project. The absence of the ZIS-16 engine and the impossibility of installing a two-seat turret on the tank also had an effect. At the same time, according to the assurance of the designers of GAZ, they were just completing the development of the design of the T-70 tank with a twin turret, to which the military gave their preference. And the light tank T-70 itself was already in mass production and was well mastered by industry.

Tactical and technical characteristics of the tank T-45: