July 11 2016
9
In early September, the Patriot park near Moscow will become a platform for the II International Military-Technical Forum Army-2016. During this event, enterprises of the domestic defense industry will show their new developments that may be of interest to domestic and foreign customers. A little less than two months remains before the forum, and now the military department begins to disclose some details about the program of the event.

The press service of the Ministry of Defense informs that in the course of the demonstration of technology there will be a demonstration of the possibilities of promising samples of robotic systems. At the site Alabino will be shown the work of various new equipment, including robots of different classes and types. The press service noted that all the robotic equipment involved in the show was created by defense industry enterprises on their own initiative.

Reported some details of the future demonstration of technology. So, the exponential program will be divided into four episodes, differing from each other by introductory, script, etc. During the four episodes, the robotic complexes will have to show their driving characteristics in rough terrain, perform demonstration shooting, make passes in minefields, etc. The demonstration program is designed so that all systems involved in it can show their capabilities. 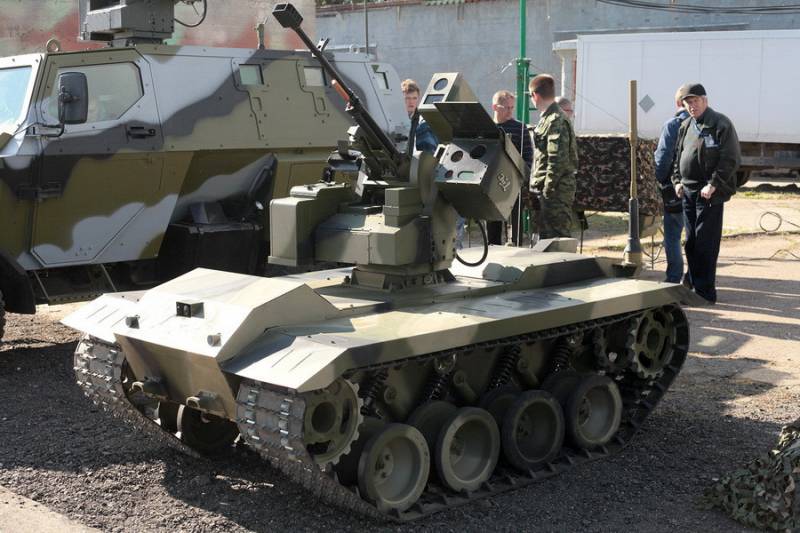 The latest robotic complexes of several types will be involved in demonstration events at the Alabino test site. The spectators will be shown a multipurpose robot “Nerekhta”, a robotized vehicle “Autorobot” and an unmanned aerial vehicle “Hornet”. In addition, some samples of such systems will be displayed as exhibits of static exposure. So, the complex “Cobra-1600”, which is part of the mobile engineering complex of mine clearance, will be shown. A robot mine sweeper Uran-6 and a fire system Uran-14 will appear at the exhibition site.

Multifunctional robotic complex "Nerekhta" was developed in the framework of cooperation "Plant them. Degtyarev "and the Foundation for Advanced Studies. For the first time, this type of equipment was shown last October at the exhibition Innovation Day of the Ministry of Defense The purpose of the project "Nerekhta" was the creation of a universal tracked platform with remote control, which can be used for various purposes. On a self-propelled platform it is proposed to install equipment or weapons of various types that correspond to the tasks to be solved.

The Nerekhta robot has a curb weight of up to 1 t and is capable of carrying a payload weighing up to 500 kg. The base platform of the complex has a length of 2,6 m, a width of 1,6 m and a height of 0,9 m. The chassis is equipped with an 5 class armor and has fixtures for mounting target equipment. The robot can reach speeds of up to 32 km / h and operate at a distance of up to 3 km from the operator. The equipment of the complex provides two-way radio communication with the transmission of commands and the necessary information, including the video signal from surveillance cameras.

During the first demonstration, two of the three developed versions of the Nerekhta robot were shown. The first involves the use of a platform that can be used to transport various goods, from ammunition to the wounded. The second variant of the complex is completed with a remotely controlled combat module with machine-gun armament. In accordance with the wishes of the customer, a large-caliber Kord or 7,62-mm PKTM can be mounted on the module attachments. The third modification is equipped with optical-electronic equipment and is intended for reconnaissance. With the help of television and thermal channels, the robot is able to monitor the situation in a radius of up to 5 km. As part of the Nerekhta project, a system of optical-electronic suppression was also developed, which allows to counteract the work of the enemy's observation systems at distances up to 2 km.

In January of this year, the plans of the development organizations for testing the new complex became known. Work on the construction of prototypes was completed, which allowed to plan the beginning of the test. In 2016, it was planned to release "Nerekhta" on the landfill. In the near future, prototypes of such equipment will have to become exhibits of the Army-2016 exhibition, as well as take part in demonstration events. 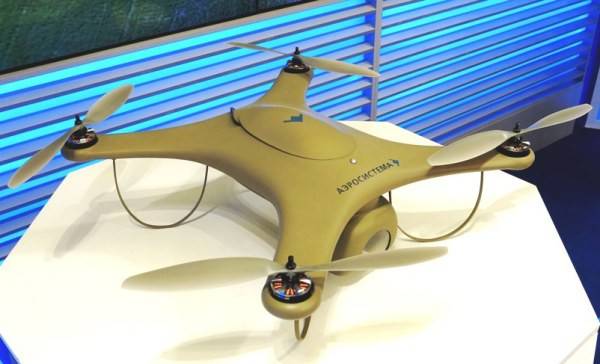 Another novelty at the site in Alabino will be the equipment collected in the framework of the project "Autorobot". This project is being developed by the Kama Automobile Plant, as well as by the VIST Group and Cognitive Technologies. The aim of the project is to create new technologies that can facilitate the work of the driver of motor vehicles, and then completely eliminate his participation in the management. The project "Autorobot" started at the beginning of last year, and in the summer it reached the stage of testing prototypes with a set of new original equipment.

The project "Autorobot" implies the creation of three developments for various purposes, which are planned to be created in the next few years. The first phase of the project received the designation SmartPilot, its purpose is to create systems that simplify the work of the driver. Automatics should take on various operations, from monitoring the operation of systems to monitoring security. All this should lead to a decrease in the load on the driver. The task of developing AirPilot is the creation of remote control systems for automotive vehicles. The third system of the family - RoboPilot. She will need to be able to fully self-driving. It was argued that the implementation of the SmartPilot project would require only 2-4 of the year, and the creation of a full-fledged autonomous autopilot can take up to 10 years. Thus, on public roads completely independent "Autorobots" will get no earlier than the second half of the twenties.

Automotive prototypes equipped with the “Autobot” equipment are planned not only to be shown during the exhibition, but also to be demonstrated at the test site. In the course of demonstration activities, this technique will have to demonstrate its ability to perform certain operations within the scope of machinery control.

Another participant of the demonstration activities in Alabino is aging the unmanned aerial vehicle "Hornet". This complex was created by the Belarusian company "Aerosystem", but at the same time is of particular interest for the Russian armed forces. UAV "Hornet" is a compact system with four rotors, equipped with navigation systems, communications and intelligence.

UAV "Hornet" is small in size and weight. The maximum take-off weight of the device does not exceed 2,83 kg, of which up to 300 g is the payload. The drone is equipped with electric motors that allow it to show high enough performance. The Hornet can reach speeds up to 65 km / h and rise to heights up to 3 km, operating at a distance of no more than 5 km from the control panel. Autopilot coupled with a satellite navigation system can guide the vehicle along a predetermined route or hold at a given point. Battery capacity allows the drone to be airborne for up to 35 minutes. 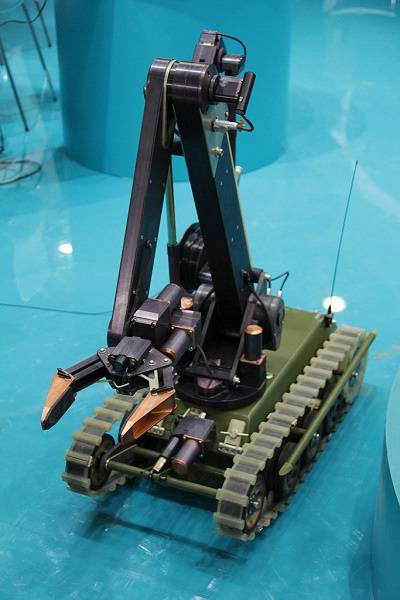 Under the main body of the UAV, an opto-electronic unit is suspended, with the help of which one or other targets should be monitored. There is a possibility of automatic maintenance of the specified object. The video signal is transmitted to the operator console, made in the form of a secure case with a set of necessary controls.

At the exhibition "Army-2016" it is also planned to show the mobile robotic complex "Cobra-1600", created by the scientific-educational center "Robotics" of the Moscow State Technical University. Bauman. This complex was created to conduct reconnaissance, search and primary study of potentially dangerous objects, primarily explosive devices. To perform such tasks, the robot is equipped with a set of video cameras and a mechanical manipulator.

In the transport position, the robot “Cobra-1600” has a length of 850 mm, a width of 420 mm and a height of 550 mm. System weight - 62 kg. The basis of the robot is a tracked platform with mounts for additional equipment. The main means of performing tasks is a retractable boom with a grab. It allows you to carry out operations at a distance of up to 0,9m from the side of the platform and lift loads weighing up to 25 kg. Five degrees of freedom are provided. The gripper can be used to move objects with a diameter of more than 215 mm.

The control of the complex "Cobra-1600" can be carried out both by cable and by radio, depending on the situation. The complex includes a control panel with the possibility of receiving a video signal, placed in a protected case. Also provides for the use of an additional antenna unit, which increases the radius of the technology.

At the beginning of this year, there were reports of the future fate of the Cobra-1600 complex. This development interested the engineering troops of the armed forces, it was decided to make a new complex in the State Defense Order for 2016 year. Already this year, the army should receive a number of such systems, which are likely to be used by sappers when working with explosive devices. 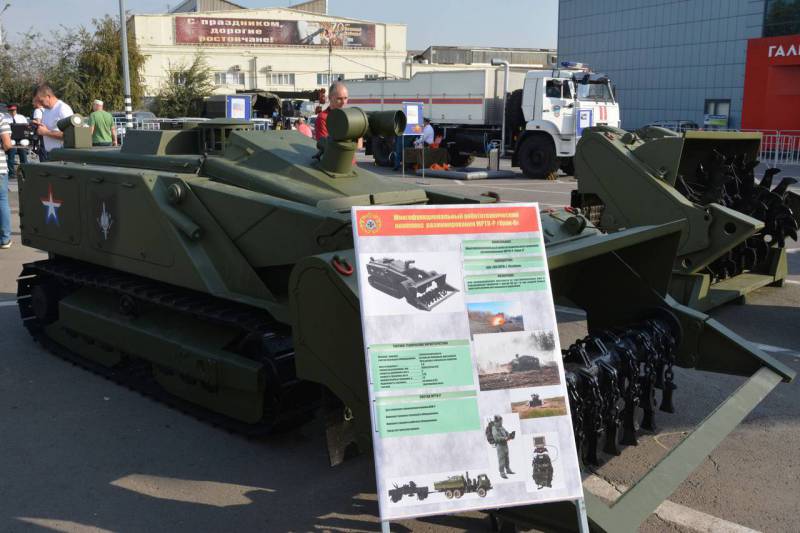 Robotic complexes of the Uranus family are already known to specialists and the general public. These developments of the organization "766 CPC" use a unified tracked chassis, but they carry different equipment for various purposes. In both cases, the radio remote control is used to control the work using a set of video cameras. The robot "Uran-14" is intended to extinguish fires. To do this, he carries an arrow with a trunk-monitor, which can turn in the desired direction and rise to the desired height. In addition, the 14 ton machine carries tanks for 2 tons of water and 600 liters of foaming agent. If necessary, water or the extinguishing agent can be supplied by an external source.

The Uran-6 robot was developed for the disposal of explosive devices and the clearing of minefields. This tracked platform can carry several types of trawl or other special equipment. The robot is capable of destroying explosive devices or provoking their operation with the help of a striker, milling or roller trawl. This ensures clearance of the minefield at a speed of about 5 km / h. To avoid damage, the external units and the body of the robot are made of armor.

Complexes of the "Uranus" family have already passed the necessary tests, as well as have been tested by the engineering troops in real operations. So, the Uran-6 robot engineers were used in clearing minefields in the North Caucasus regions, which made it possible to secure the local population, and also to return some land to use.

Currently, domestic enterprises are actively developing new robotic systems for various purposes. Universal platforms designed to solve several problems are being created, specialized samples are being developed, and work is underway to create new technologies for one purpose or another. In a recent announcement by the press service of the Ministry of Defense, it was argued that the Army-2016 exhibition will show the work of multi-purpose systems, reconnaissance drones, as well as complexes that simplify the management of automotive vehicles. In addition, some of these developments will be displayed in static exposure.

One of the main tasks of the upcoming military-technical forum is to demonstrate the latest achievements of the Russian defense industry. As follows from the latest reports and announcements, in recent years, significant progress has been made in the field of robotics and remotely controlled systems for various purposes. Visitors to the Army-2016 forum in the near future will be able to personally see the work of some new developments.