July 7 2016
23
GAZ-46 is a Soviet floating car that has been manufactured at the Gorky Automobile Plant since 1953. In the Soviet Army, this car received the designation "MAV" - a small watercraft. The main purpose of this car was to ensure the actions of intelligence units, as well as carrying out engineering work on reservoirs.


The experience of the end of World War II demonstrated the strengths and weaknesses of various Soviet military equipment, as well as gaps in its creation. So in the army there was no domestic floating cars. At the same time, the four-wheel-drive amphibious Ford GPA and DUKW six-wheeled trucks received under the Lend-Lease program made it easier for Soviet troops to force the rivers of Eastern Europe at the final stage of the war. It is quite natural that this military equipment was taken note of by the military and after the end of the conflict it was included in the long-term rearmament plan along with other samples. In the USSR, the design of both passenger cars and cargo floating cars began.

First of all, the Soviet military was interested in a light commander car that could cross various water barriers and move in the same group with armored vehicles. The cargo 6-wheeled DUKW became the first prototype for the ZIS-485 - a large waterfowl vehicle (BAS), and the GAZ-46 - a small water vehicle (MAV) became an analogue of the floating Ford GPA jeep in the USSR with time. 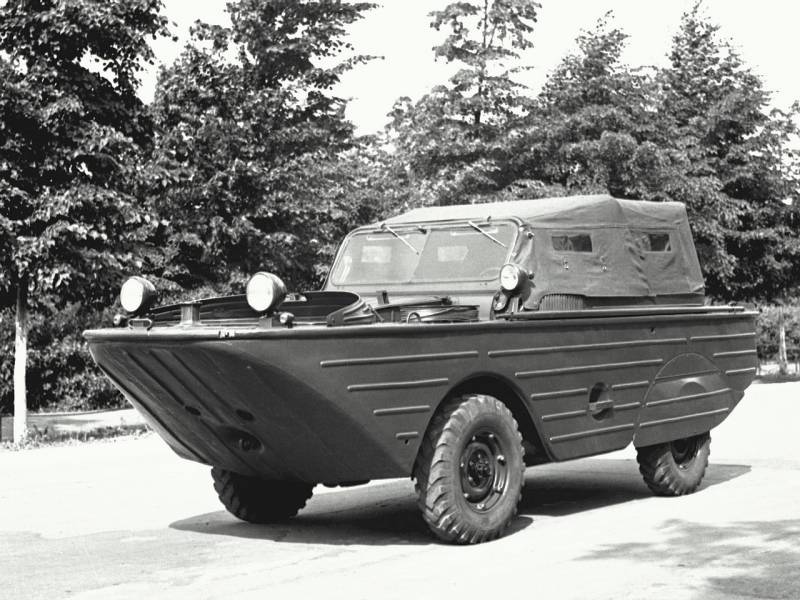 The thorny path to mass production

Immediately after the end of World War II, the Moscow Research Automotive and Automotive Institute (NAMI) initiated work to create a floating car built on the basis of components and mechanisms of the all-wheel drive GAZ-67 off-road vehicle well mastered by Soviet industry. It was decided to develop a new amphibian with an eye on the American Ford GPA floating SUVs, which began to enter the US Army in 1942. At the same time, Moscow engineers from NAMI decided to creatively rework the American idea.

22 July 1948, the Engineering Committee of the USSR Armed Forces approved the final tactical and technical requirements for the designed floating car, which was named NAMI-011 and the military designation MAV. The car was intended for transportation by land and crossing over various water barriers of small reconnaissance and other groups, towing light boats or other light trailers, pontoons and other watercrafts used by engineering units of the Soviet Army on the water surface.

At the same time in the creation of such a machine was one snag. The thing was that the GAZ-67 off-road vehicle, which had been constructed during the war, was becoming obsolete, and the new GAZ-69 off-road vehicle was preparing to replace it. Despite this, at the end of April 1949, prototypes of the floating car NAMI-011 were already built, and in May of the same year they passed a series of factory tests. Soon, in the summer of 1949, followed by ground testing of new items, and in the fall - interdepartmental, which took place in the vicinity of Leningrad. All tests were quite successful. So successful that, after their completion, the creators of the floating car NAMI-011 were awarded the Stalin Prize of the 3 degree “For work in the field of mechanical engineering”. 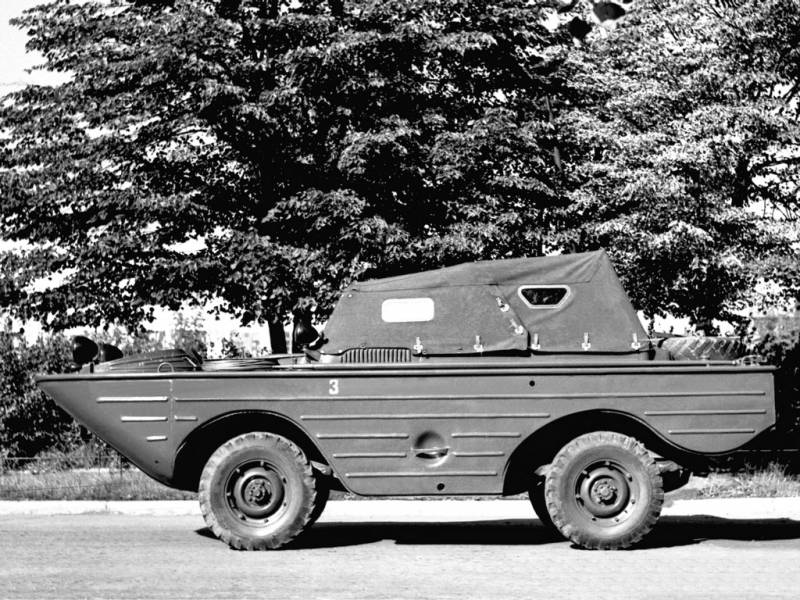 Later, one of the prototypes of the car NAMI-011 along with all the available technical documentation for the car was transferred to GAZ. It was in Gorky after the seemingly insignificant refinement of the design that mass production of amphibians was to be organized. At the same time, in addition to the outdated design of the GAZ-67 car itself, there was another problem. The fact is that the engineers of NAMI coped with their task, but their floating car was made literally “on the knee”. The drawings of the car received from Moscow had inconsistencies, which was quite normal for pilot production, but absolutely unacceptable for serial production.

At the same time, it was very dangerous not to fulfill the government resolution at that time, and a separate group was created at GAZ, which was headed by V. A. Kreshchuk. This group took up the development of technical documentation and the correction of errors made by us. At the same time, in Gorky as early as in 1944, when the company considered the possibility of creating its own amphibious vehicle based on GAZ-67, they came to the conclusion that this idea is absolutely unpromising. The launch of the car in series with mass production required quite a lot of significant technological changes, which in NAMI when building prototypes were overcome by various methods unsuitable for serial production. At the same time, at GAZ, they initially relied on the sixty-ninth, in which from the very beginning the possibility of a future conversion to a floating version was taken into account.

It would be more logical and cheaper to simply reject the version created by us. But not in the USSR. It was inconceivable to ignore the direct instructions of the government and to abandon the design of the machine that received the Stalin Prize. Therefore, in the autumn of 1950, GAZ-011 (aka NAMI-011) was ready to get on the conveyor in Gorky. At the same time, the company carried out parallel work under the direction of the designers A. A. Smolin and G. M. Wasserman on the creation of an amphibian based on the units of the GAZ-69 off-road vehicle, which received the new designation GAZ-46. And on the floating car GAZ-011, and on the GAZ-46 work at the plant were carried out quite thoroughly. Andrey Lipgart, the chief designer of the enterprise, hoped that the GAZ-011 and GAZ-46 amphibians would be tested at the same time, and the customer would be able to choose a newer design. 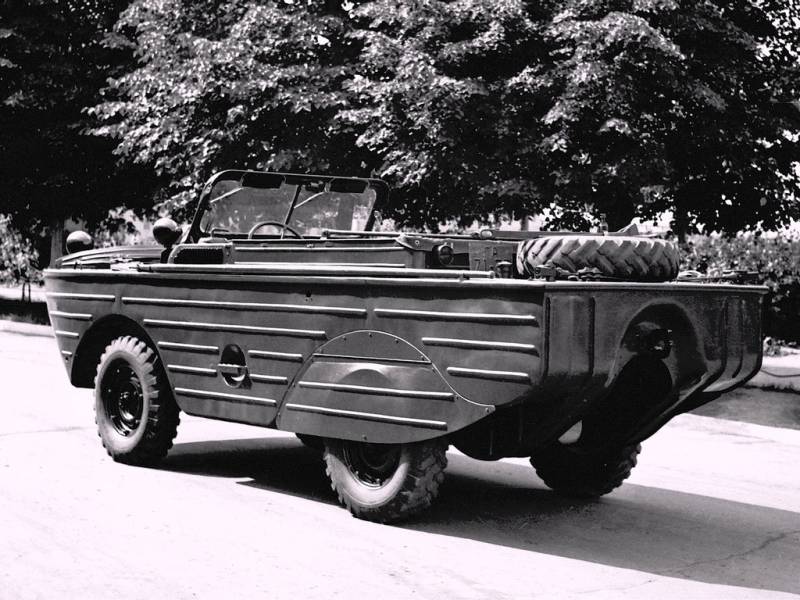 In 1951, the Engineering Committee of the USSR Armed Forces conducted control tests of the GAZ-011 vehicle, which was modified by V. A. Kreshchuk. The amphibian turned out to be quite good. Designers significantly reduced its weight, increased speed and improved reliability. Military GAZ-011 also approved. As a result, there was a situation when the plant could no longer refuse to release an amphibian based on the GAZ-67 off-road vehicle, however, there was also no possibility to release it, especially in the context of the deployment of a more modern GAZ-69 production. Starting the mass production of the GAZ-46 amphibian, since its rival liked the military so much, was also quite difficult. All this confusion with two parallel projects lasted until, in 1952, the designer Kreschuk personally sent a letter to his friend Stalin by secret mail about the situation with floating cars at the factory.

The reaction to this letter was not long in coming, the company "flew hats", it’s not good yet to plant anyone, but many officials and designers of the plant and various departments were demoted. Also, the Council of Ministers resolution by 14 of March 1951 of the year, number 981, on awarding the Stalin Prize to the designers of the floating NAMI-011 car was canceled. And in Gorky decided to collect GAZ-46. At the same time, the production plan for GAZ-011 in 1953 was fulfilled at the plant by 100%, in total 68 copies of this vehicle were produced. After that, he was replaced by a new car GAZ-46. 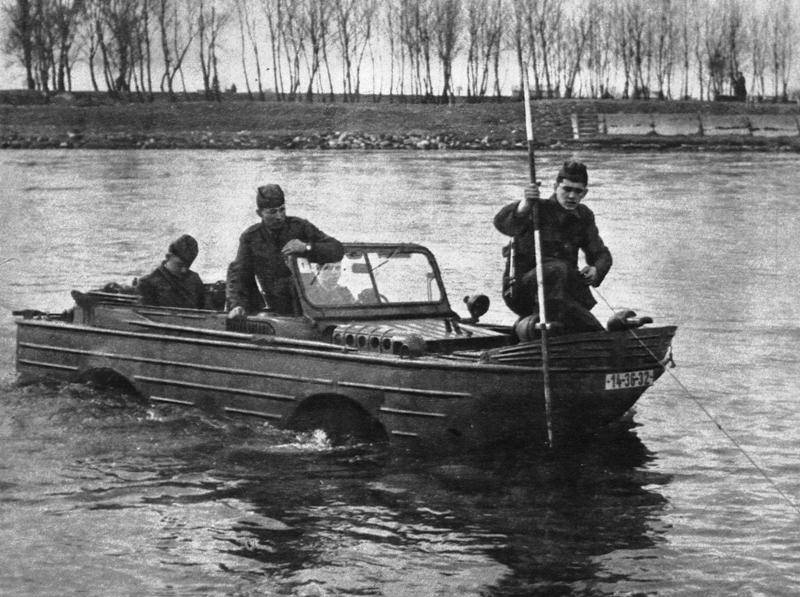 The buoyancy of the MAB was provided by a steel welded body on a frame made of box-shaped profiles. It was a pontoon type hull with no doors. The body of the floating car inside was divided by vertical transverse partitions into the 3 compartment: fore, middle and stern. In the nose compartment of the car was the engine compartment (MTO). The middle compartment was the cabin of the crew and passengers, and the luggage compartment was located at the rear. On the nose of the floating car was a flip-over breakwater shield, which is lifted by the crew before the car enters the water. The shield or screen prevented the car from being “buried” by the nose, and also protected the air intake required for engine cooling and the central compartment from water ingress. Between the headlights was a bollard, necessary for mooring amphibians on the water and capstan for a rescue buoy. Outside the body of the GAZ-46, lever shock absorbers were installed, and spare wheels were placed on the rear upper platform.

The floating car GAZ-46 was equipped with an 4-cylinder engine from the GAZ-M20 “Victory” car, and the suspension of the wheels and the transmission were borrowed from the GAZ-69 SUV. The car's engine was connected to a manual gearbox, which had three front and one reverse gear, and a two-stage transfer case. On the water surface, the car could move using a three-bladed propeller, which was driven by a cardan shaft from the transfer case. The direction of movement of the car in the water could be changed by a water wheel, which was placed in a stream of water thrown by the propeller of the boat. A distinctive feature of the amphibious GAZ-46 (MAV) was the wheels of a special design, to increase all terrain, they allowed to move on the flat tires without any risk of turning them and getting water into the tire.

Since the car was floating, all its electrical wiring was performed with hermetic electrical connectors, the ignition distributor, which was completely sealed, did not need additional protection. A muffler and an exhaust pipe were put on the forward deck of the floating GAZ-46. True, the muffler created so much noise that unmasked the car. On the other side of the nasal deck was the neck of the gas tank, that is, if necessary, it was possible to refuel the fuel tank directly on the water. 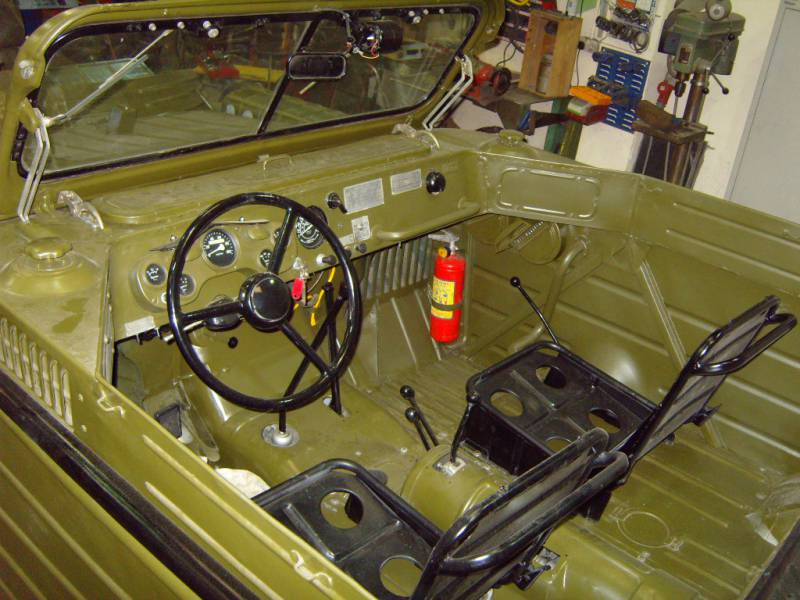 The design of the cockpit, if it is appropriate to use such a loud definition, was spartanly simple, since the floating car was originally designed on the instructions of the military. Some special level of comfort was not provided for either the crew or the passengers. In general, the floating car GAZ-46, rather, looked like a boat. The instrument panel of the MAV was completely borrowed from the GAZ-69 SUV. At the same time on the instrument panel there were a tachometer and a warning light, which indicated the appearance of water in the hold. The transmission control levers were on the right side of the driver. The pedal brackets differed in their unusual shape and were close to each other, so that there were as few as possible different technological openings through which water could get into the body of the car. The windshield frame could be laid on the hood, and the awning from the tarpaulin could be easily stretched over the passenger compartment. The front row of seats included two seats: for the commander and the driver. Behind them was a three-seater bench, which had no adjustments. For the convenience of servicing, a fuel filter was installed in the cab.

The floating car GAZ-46 (MAV) entered into service with separate patrol-assault battalions, as well as individual pontoon-bridge regiments, in addition to which it was exported to the countries that were parties to the Warsaw Pact. Car production continued in the Soviet Union from 1953 to 1958 the year when production of the base GAZ-69 was transferred to the UAZ plant. At the same time, in Ulyanovsk there simply was no production opportunity to continue producing a floating car, which, along with a small need for such machines, caused the termination of their release. In addition, the first BRDMs had already begun to enter the army. There is no exact information on the number of MAVs produced, but, apparently, around 650 of such vehicles were collected. 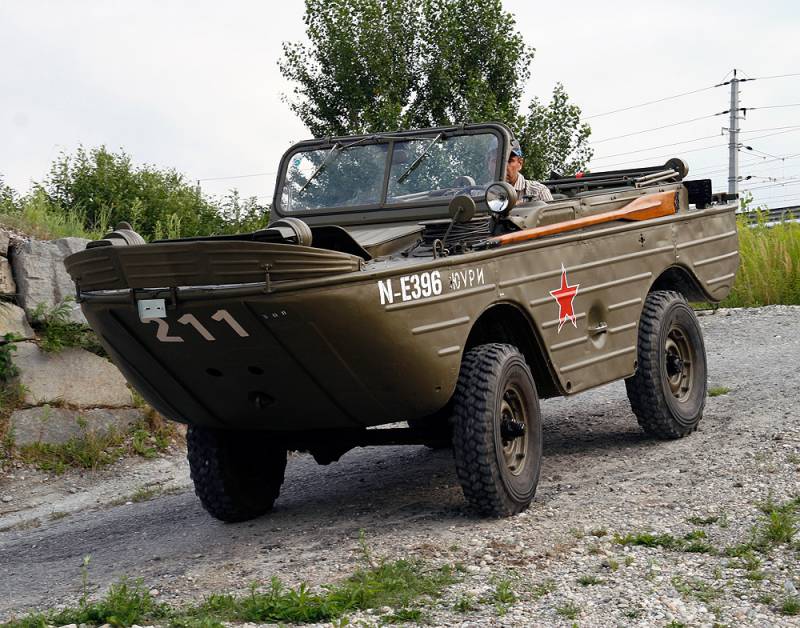