July 10 2016
135
Since Soviet times, it has happened that all weaponwhich the adversary can boast of, must have a domestic counterpart. Although our experience says: there are far more effective means of struggle than copying ideas. And than trying to catch up, especially in areas where we are not particularly strong, would it not be better to look for other solutions that would negate the technological advantages of the likely adversary?


F-22 "Raptor" - a car of prohibitive cost, approaching three hundred and more than millions of dollars, and with a minimum serial production for the fighter (one hundred forty-five pieces). According to common sense, this "bird of prey" can hardly be attributed to a new generation of combat aircraft with the possibility of widespread and mass application. But it so happened with the notorious fifth generation that the ambitious Americans themselves came up with a new brand, believed in it and swelled crazy money. Well, it's a master's business. But why and why on aviation a gamble we succumbed to our PAK FA?

We are comforted that it will cost much less — a hundred million. Thank you, of course, but why pay a hundred million for a plane that, at best, will be able to produce in quantities of 50 – 70 units? And then, if it comes to production. All this takes place in a country where the basis of the Air Force (now the VKS) is still made up of Soviet-built airplanes (70 – 80-s) and which barely copes with the production of 60 – 70 military and military transport aircraft for its VKS a year.

The race for Americans on the same laid track is hopeless and senseless. We still won't be able to catch up, but for some reason we try to participate in their stupidity as an outsider and a loser. There also Chinese. But American manners with our Russian poverty and accumulated technological backwardness are no longer just wasteful.

Russia's lack of complexes about the fifth generation has several explanations. Perhaps, even since the Soviet times, our fears of falling behind the Americans in something very important, substantial and permanent rivalry with them are having an effect. But there is no Union with its power, and such reflection is inappropriate. But no. Having crushed our giant aviation industry, not being a superpower already, and finishing with the last crackers of the Soviet aviation industry, we pretend that nothing terrible has happened. And now, after twenty years of degradation and the devastation we have made, for which the Americans and Europeans certainly consider us to be imbeciles, we are trying to inflate our cheeks and participate in the dispute of “adult uncles”.

Our passionate desire to get into the “fifth class” has a completely self-serving, pragmatic explanation. This is the focus of the United Aircraft Corporation together with the Sukhoi Design Bureau on budgetary bounties. And the money under the "fifth class" allocated huge.

Now, from subjective assessments and opinions, we turn to common sense. They say the Raptor is a wonderful aircraft. In computer battles with all hypothetical opponents, including our Su and MiG, he smashes them with a dry account, leaving no chance. We believe and suppose. But a reasonable question arises: why should we stand against such an ultra-modern and expensive American car with probably the best e-filling, ours, which is also very expensive, but much less perfect? What, we have with the Americans in this regard there is a contract that requires to act according to the dueling rules of the Musketeers of the Middle Ages? 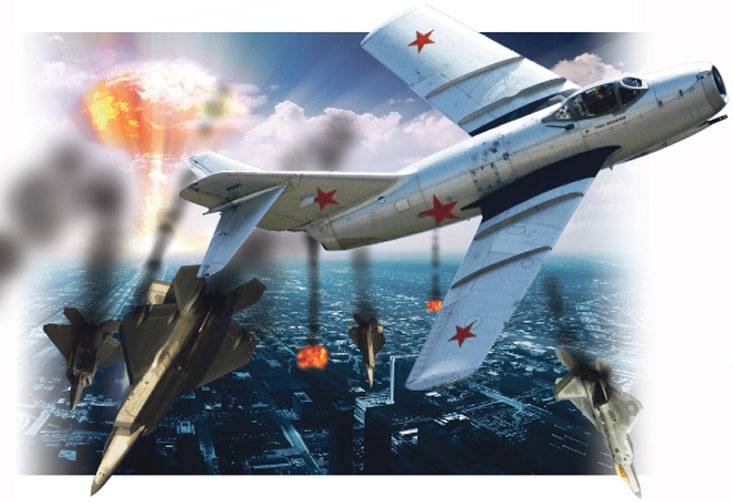 After all, it is obvious that the entire sickly fleet of Raptors (only 140 units), since they are so good and priceless, can be disabled by much cheaper in terms of the cost of ground-to-air missiles, without bringing their aircraft to meet with this predator. It turns out and cheap, and angry. In this case, we do not risk our pilots and aircraft. In modern conventional war, with sufficient density of air defense systems with C-300, C-400 missiles and the like, the entire flock of the fifth generation will be destroyed in two to three weeks of intense combat operations. After that, the existence of "Raptors" can be forgotten. In a conventional war with a serious adversary with powerful ground-based air defense systems, the life of a costly fighter, say, the Raptor, will be reduced to one or two sorties. Based on this logic, the fifth generation machine is just a tribute to ambitions or a platform for working out new technical solutions, no more. In other words - an experiment.

There is one more argument, absolutely deadly for all modern, combat aircraft of the fourth, and especially the fifth generation, supersaturated with e-stuffing.

None of them, with all their computer stuffing, is designed for the use in the medium of electronic over-perturbations caused by the explosions of even a small amount of nuclear ammunition. Now imagine what could happen to the whole of this supersensitive system, its software, the actuators themselves, if they were in the field of the impact of a nuclear explosion or its consequences. Technique simply go crazy. The plane will turn into an uncontrollable body. The implications are clear. And the conclusion suggests a single and sad: modern aerial equipment is not produced for real combat use in a future war, but for the sake of maintaining the aircraft industry itself and as a deterrent factor.

Therefore, such projects are just a way to siphon huge funds from the state budgets of their countries. And here we need weighty arguments to influence politicians, who, as a rule, are people with little knowledge of technology. 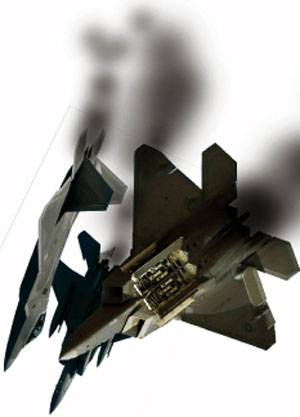 Such systems are able to work only in benign conditions, and even then with the multiple overall superiority of one of the sides of the confrontation, as in the conflicts of NATO - Serbia, the USA - Iraq or the USA - Afghanistan. A collision with the participation of nuclear powers, even with their limited use of nuclear weapons in near space and in the air (in the range of combat aircraft heights), simultaneously resets their entire aviation potential and the very possibility of its use.

Let us ask ourselves another such question: from what airfield pavements does all military aviation take off today? With concrete strips in length from one and a half kilometers. What objects with the outbreak of hostilities always bombed first? Just these same airfields with concrete lanes and aircraft stops. The use of cruise missiles has turned the airbase into the most vulnerable and defenseless attack targets. Thus, the tight linkage of modern combat aircraft to airfields and concrete in the case of the application of preventive strikes on them turns aviation into an ideal target. That is how the Israelis smashed Egyptian aviation in a six-day war. The same happened with the Yugoslav, Iraqi, Libyan Air Forces.

What are the conclusions from this? Mixed (soil-concrete) type of basing and use of combat aircraft is the most important factor in the survival of the aircraft on the ground. This means that in any next generation of combat fighter-assault aircraft, the technical capability of its ground-based base and work from temporary forward airfields must be realized without fail. So, the sixth generation aircraft must certainly take off from the packed soil and land on it. And therefore, it should have a takeoff and landing speed of no more than 130 – 140 km / h, and not at 250 – 270 km / h, as it is now.

And here we are approaching the main criterion that determines the belonging of an airplane to the “five – six” generation. In any case, for Russia (let's leave the Americans alone).

The future is in the past

In modern combat aircraft, the handle or the steering wheel (on heavy vehicles) in the hands of the pilot is essentially just a joystick that sends signals to a powerful computer charged with the necessary control programs. From the same computer, the combat information center, the processed control signals through electric or fiber-optic networks are fed to actuators and drives, and from them to aerodynamic control surfaces and engines. As we see, there is no direct connection between the pilot and the machine; in fact, all the control functions are taken over by the electronic filling of the aircraft. And the pilot is powerless to do anything if the enemy manages to turn off the "brains" of the aircraft. In addition to EW systems, the most powerful factor affecting the aircraft’s electronics is the already mentioned effect of nuclear explosions: high-intensity electromagnetic and other exposures. So no one today can guarantee that in extraordinary, and even more fatal circumstances, complex and expensive aviation technology will not turn into rubbish at once. 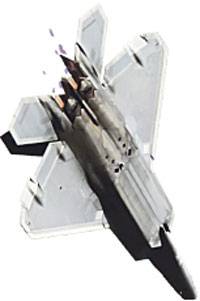 From the foregoing, a vision arises of the appearance of our Russian aircraft of the sixth, let's say, generation. It must be manned, inert to all appearances and sources of impact (EW, effects of a nuclear explosion), massive, relatively cheap, without electronic extravagance, with a conventional cable-booster control system like that of the same MiG-15. The functions of the pilot, as usual, are reduced to piloting, selection of targets and decision-making on the use of weapons. Everything else is a matter of homing his guided weapons. The uniquely low take-off speed (about 140 km / h) will provide the possibility of mobile-based aircraft and its work from advanced ground airfields, since the concrete runways required for modern samples are destroyed by the enemy in the first place and are much more vulnerable than the aircraft themselves.

The cost of the machine should allow to produce it in thousands of copies. In this sense, a combat aircraft is a kind of aviation Kalashnikov.

For us, the general criterion is low cost, hence the possibility of mass production in thousands of lots. The new aircraft must take on board the combat load within one and a half to two tons, be barely noticeable thanks to a glider made of composite materials, have an engine with a variable thrust vector and, as already mentioned, take off and land on the ground. The take-off weight of such a single-engine vehicle is about 4,75 – 5 tons. For an emergency take-off, it is necessary to provide for the possibility of a forced vertical-horizontal start from a transport platform with normal then landing on the ground or concrete. On board, a compact system of following the terrain can be installed, similar to those operating on long-range aviation and sea-based cruise missiles of class X-55, X-101, and Caliber.

It is my deep conviction that this should be the prototype of our sixth generation Russian combat aircraft.

Suppose our own "Raptor" will show off at air shows with his American twin brother, to rush, to craft aerobatics, in a word, with might and main to promote. So what? Who he is, a piece and wildly expensive, will be needed in the absence of our workhorse, which must do all the dirty work. It is also unclear why one should be proud of the extreme cost of an absolutely unnecessary and useless object, given our blatant unpreparedness for the imminent inevitable trials. Therefore, it is worth considering the alternative: is it not better to produce the necessary machines 40 – 50 against one absolutely useless in the serious “fight” ahead of us?

The XX-Century MiG-15 is our asymmetric response to the American aviation fashions imposed on the world. This will be a furious blow to the jaw of any adventurer on Russian territory and at the same time a state order for the decaying or almost dead aircraft factories: Saratov, Smolensk, Myasishchev and others.