July 4 2016
112
In the second half of June, several reports appeared in the domestic media about possible ways of developing one of the most interesting projects of the present time and the near future. With reference to unnamed sources, plans were announced regarding certain features of the possible construction of a Russian aircraft carrier. Last news on this topic are of great interest because they reveal some technical details of the projects.

22 June Interfax news agency revealed some details of future work. An unnamed source of the agency, associated with the situation, said that the prospective domestic aircraft carrier of the 23000 project "Storm" is likely to be equipped with a nuclear power plant. The necessary systems have already been developed, and their revised counterparts are planned to be tested during the operation of new ships. Thus, the “platform” for operational testing of a new reactor and other means of a power plant should be the nuclear-powered icebreaker “Arktika”.

The source of Interfax also appreciated the capabilities of design organizations and the shipbuilding industry. In his opinion, taking into account the time required to create the project, all the necessary work will take about eight to nine years. At the end of this period, the fleet can count on receiving a new aircraft carrier. It should be remembered that the military department has not yet ordered the development of the project and so far does not plan to build a ship with aviation group. 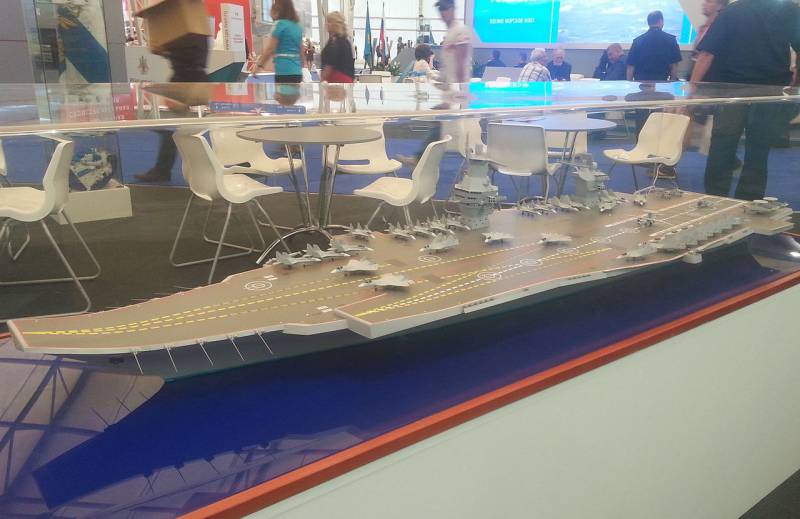 According to reports, the nuclear-powered icebreaker Arktika received a reactor of the RHYTHM-200 type. This system is a water-cooled reactor designed to be used as the main element of a nuclear power plant of icebreakers or floating nuclear power plants. The reactor was developed at OKBM. I.I. Afrikantov. RHYTHM-200 has a dual-circuit architecture with four steam generators. A characteristic feature of the project is the integration of steam generators into the core body. This made it possible to reduce the size and weight of the entire complex, as well as reduce the consumption of materials and reduce the likelihood of problems.

The RHYTHM-200 reactor develops thermal power up to 175 MW, which allows power plants to be supplied with power up to 30 MW. In a variant of the reactor of a floating power plant, this system is able to provide energy output up to 55 MW. The lifetime of the reactor is stated at 40 years. At one refueling with nuclear fuel, he is able to work 7 for years.

16 June The Baltic Shipyard (St. Petersburg) launched the head nuclear-powered icebreaker "Arktika", designed by 22220 / LK-60Я. This vessel is equipped with two RHYTHM-200 reactors, which provide total power on the shafts of three propellers at the level of 60 MW. Due to this, an icebreaker with a displacement of more than 33,5 thousand tons can reach speeds up to 22 knots, as well as to break through thick ice. Currently, the "Arctic" is located at the extension wall. Delivery of the vessel is scheduled for the end of next year.

Draft aircraft carrier 23000 "Storm" was developed on its own initiative by experts of the Krylov State Research Center. This project proposes the construction of a ship with a displacement of the order of 80 thousand tons, equipped with a nuclear or non-nuclear power plant. The ship must carry a flight deck with take-off positions equipped with jumps and catapults. It provides for the possibility of carrying several dozen airplanes and helicopters, and in addition, the use of weapons to protect against various threats and attack targets of various types.

Earlier, in February of this year, in the reports of the national press, interesting features of the proposed program for the construction of an aircraft carrier were mentioned. So, it was claimed that the nuclear power plant, which can be used on a new aircraft carrier, will be tested in one of the other projects. Similar systems were also proposed to be used on prospective destroyers of the “Leader” type. After operating and evaluating capabilities, such systems can be used in the construction of new ships with an aviation group.

Recent reports on the unification of the power plant are of particular interest. This year's news shows that in the shipbuilding industry there is an interesting proposal for equipping promising ships and vessels of several types. In this case, the RHYTHM-200 reactors with the corresponding equipment in different quantities can be used on icebreakers, destroyers and aircraft carriers.

It should be noted that the 23000 “Storm” project, as well as individual proposals within it, have not yet received official approval from the military and, as a result, they retain the status of initiative development with uncertain prospects. Krylov State Scientific Center for the first time showed his achievements in the field of aircraft carriers a few years ago. Since then, various details and plans of the organization have been repeatedly announced, but all of them still have not received official support from the Ministry of Defense. As a result, the real prospects of the project remain in question.

On the last day of June, new reports appeared regarding the possible timeframe for the development and construction of a new domestic aircraft carrier. The Interfax-AVN publication has received new data on this from an unnamed source in the shipbuilding industry. According to this source, the aircraft carrier construction project is still far from practical implementation.

The source said that at the moment work is underway, but they are still in the earliest stages. The aircraft carrier design phase will only begin in the 2020 year. According to current plans, the construction of the aircraft carrier will be conducted only in the twenties, but not earlier. The source of the Interfax-AVN publication hopes that by the beginning of the next decade, industry and the military will be able to form a common and unified view of cooperation and production ties that will be used during the construction of the ship.

The said deadlines for the design and construction of a promising ship, according to the source, fully fit into the logic of the development of shipbuilding in recent decades. In recent years, the industry has been engaged in the gradual development of production capacity, and further modernization of enterprises will allow the construction of large ships of large displacement by the end of the next decade.

The latest news clearly demonstrate the plans of individual organizations of the shipbuilding industry. They show that the Krylov State Scientific Center continues the development of its development, created on an initiative basis. These or those moments of the new project are being worked on, and information about such works is occasionally published in the press. The general public gets the opportunity to follow the progress of an interesting project, which in the future may have a significant impact on the image of the naval fleet Russia.

However, there is still a typical problem in the context of building new aircraft carriers. Discussion of the possibility of creating such ships continues for a long time. In addition, since the summer of 2013, there has been a discussion of the Storm project, proposed by one of the leading research and design organizations. The issue of building aircraft carriers attracts both specialists and the general public. Meanwhile, the military department is not in a hurry to plan the construction of new ships for the near future.

Representatives of the Ministry of Defense sometimes raise the topic of the aircraft carrier program, but so far only preliminary plans have been announced, which may later undergo noticeable changes. According to the latest statements of the responsible persons, the contract for the design and subsequent construction of the aircraft carrier should appear no earlier than mid-twenties. Thus, the construction of the ship, which requires a long time, will end no earlier than the thirties.

The current situation with information about plans and official reports directly indicate that at present the Ministry of Defense does not see the need for the urgent construction of a new aircraft carrier. Implementation of such programs belongs to the distant future - not earlier than the beginning of the next decade. A quicker start of work, for whatever reason, is not considered necessary.

Apparently, such a rejection of the speedy construction of an aircraft carrier has several reasons of a different nature. Development and construction of a ship with an aviation group is an extremely complex and expensive program. In addition, as part of this program, it is required to solve a host of other issues related to equipping the ship, forming an aviation group, etc. All this requires the involvement of the masses of various organizations and enterprises, as well as coordination of joint efforts and, naturally, enormous financial expenditures. Probably, while the leadership of the Ministry of Defense does not consider it necessary to start such programs.

The military are not planning to start building an aircraft carrier for the Russian Navy, but the development of such ships continues as an initiative. It can be assumed that in the near future will be published new reports on the progress of such work and the success in their implementation. It remains to follow the news and after they arrive, draw the necessary conclusions.