30 2016 June
53
The next tests of one of the elements of the national missile defense system took place. A new launch of anti-rocket 53Т6 / PRS-1 was conducted at the Sary-Shagan test site in Kazakhstan. The purpose of the launch was to check the product for compliance with the stated characteristics. The regular conduct of such inspections allows us to determine the real prospects of the missiles in service, as well as adjust plans for the operation of such weapons.

The latest test launch of the 53Т6 interceptor missile took place on June 21 at one of the sites of the Sary-Shagan test site. Soon after the tests, a video recording of the launch and initial acceleration of the rocket was published. The product successfully left the launch shaft and, leaving behind a cloud of smoke, went to the specified area for finding a conditional target. The anti-missile successfully completed its task and made the conditional destruction of the target. The defeat of the attacking object occurred at a specified time and in the right area.

The purpose of the test launch of 21 June was to test the operation of the missile systems to confirm the tactical and technical characteristics of the 53Т6 products that are in service with the air and missile defense forces of the Aerospace Forces. The successful implementation of the combat training task confirmed the characteristics of the antimissile, and also allows the operation of such products to continue in the existing missile defense system. 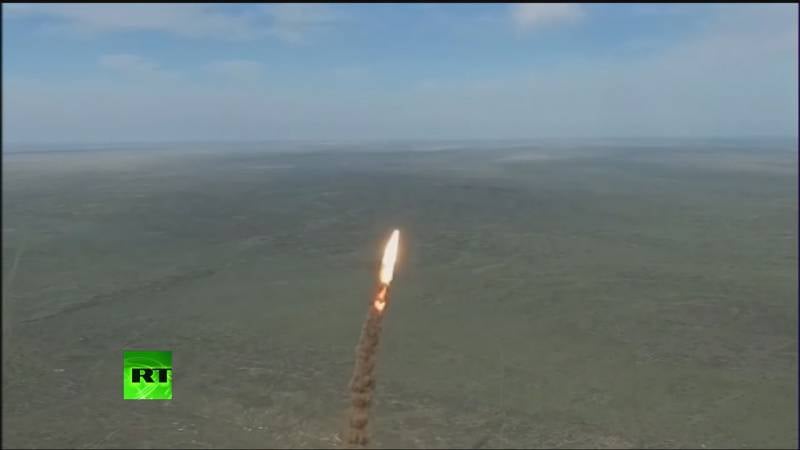 The launch of the 53Т6 rocket, which took place on June 21. Frame from video

Complex A-135 has been developed since the early seventies in the course of the joint work of a number of research and production organizations. It was planned to include in the prospective missile defense system a multifunctional radar station capable of monitoring the situation and ensuring the operation of antimissiles, command and computing point, as well as firing systems with two types of missiles. Initially, a two-echelon defense variant was developed with long-range 51Т6 missiles and high-speed 53Т6 missiles with a lower range of fire.

The 53T6 missile test began in mid-1979. Subsequently, the refinement and improvement of the design of the elements of the A-135 complex allowed us to continue testing, as well as move on to intercepting real ballistic targets. So, during the first half of the eighties, the A-135 system carried out several combat training intercepts of ballistic missiles, which were armed with the Strategic Missile Forces and the naval fleet. In 1984, the 53T6 missile completed state tests, after which it was recommended for adoption.

By the end of the eighties in Moscow, the construction of the main objects of the A-135 ABM system was completed. In addition, a similar complex, which had some differences, for testing was deployed at the Sary-Shagan test site. State tests of the landfill complex, which received the designation "Amur-P", ended in December 1989 of the year. Soon all the necessary checks of the anti-missile defense complex, designed to protect Moscow and the central industrial region, were completed.

According to reports, in 1990, the industry began full-scale mass production of new interceptors, including the NRS-1 / 53Т6. In December of the same year, the A-135 complex and all its elements were put into trial operation. In addition, at the same time, the Amur-P test complex was decommissioned. It already had all the necessary work done, after which it was considered inexpedient to further operate the systems. During the operation of the complex, 37 53Т6 and 19 missiles were fired at the Sary-Shagan firing range using 51Т6 products.

In 1996, the A-135 complex was officially adopted by the air defense forces. At that time, the complex had two positions for 51ТНNXX missiles for 6 launchers on each, as well as five positions for 16Т53. In total, 6 missiles of the PRS-68 missiles were deployed in positions with 1 and 12 launchers. Due to such a composition of the shooting complex, it was planned to provide reliable protection of the area against enemy ballistic missiles with their destruction in a fairly wide range of ranges and altitudes.

Parallel operation of the two types of interceptor missiles continued until the 2006 year, when the decision was made to remove the 51Т6 products from service. After the implementation of such a solution, only one type of interceptor missile remained in the Amur complex - 53Т6 / PRS-1. Soon there were reports about the possibility of upgrading this weapons with a significant increase in its characteristics. It was reported that even during the tests, the potential of the rocket was established in terms of renewal. By any means or other it was possible to increase the firing range by 2,5 times, the interception height - by 3 times. 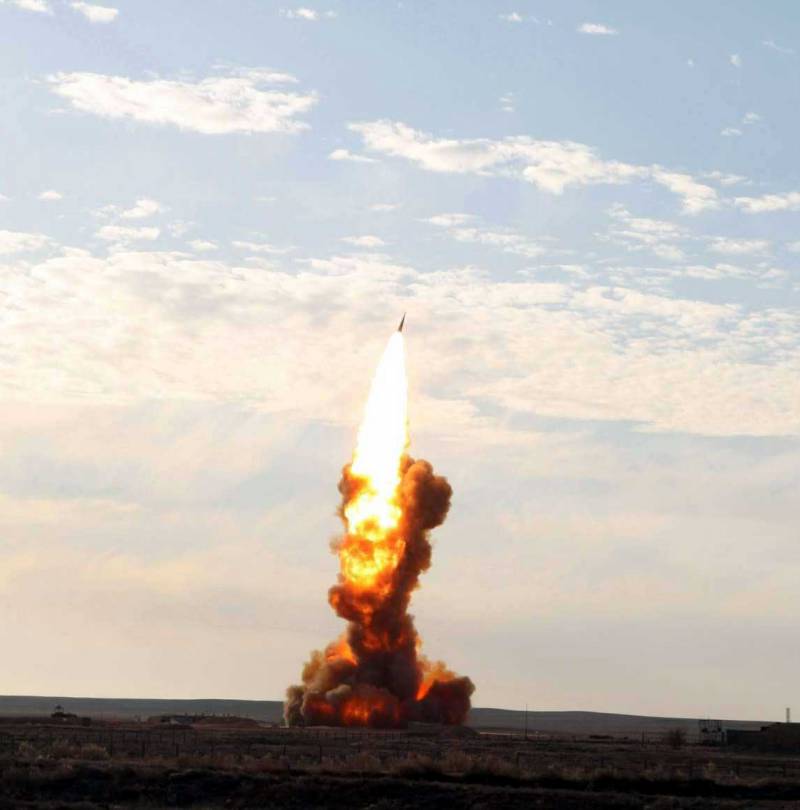 Initially, the 53Т6 rocket had warranty periods at the level of 10 years. Thus, the missiles of the first series, remaining in launch positions or in warehouses, should have been sent for recycling no later than the beginning of the two thousandth years. Nevertheless, the study of the prospects of rockets from the point of view of the resource extension was started. Within the framework of the project with the symbol “Priozersk”, it was possible to increase the warranty period of the interceptor missiles to 15-20 years. In addition, other development work was carried out. In order to test certain ideas, as well as to confirm the characteristics during the nineties and two thousand years, 8 launches were performed. The site for these tests was the object "Ethylene" at the Sary-Shagan test site.

There is some information regarding the design of the anti-missile 53Т6. The product receives a conical bearing housing with detachable warhead. According to different sources, the rocket body is made of composite materials using some parts of high-strength metal alloys. It is also possible to use ceramic elements on the parts of the body that are exposed to the highest thermal loads. Due to the high speed of the missile flight, measures must be taken to protect the internal units from mechanical and thermal loads.

The rocket is equipped with a solid-propelled launch-sustainer engine type 5C73. The engine uses a charge of solid fuel with a high specific impulse, which ensures rapid acceleration of the rocket to the required speeds to reduce the time to reach a given region. Control of the rocket in flight is carried out by the gas-dynamic method, using injection of engine exhaust gases into the corresponding part of the nozzle. There is also information about the use of gas-dynamic control surfaces used in the final phase of flight.

The rocket 53Т6 is equipped with a radio command system. The ground elements of the A-135 complex in the form of the multi-purpose radar station Don-2Н track the target and the antimissile, as well as generate and transmit commands for the latter. The onboard equipment of the rocket takes commands from the radar, which are processed by the autopilot and used to adjust the course. The most important feature of the missile control systems PRS-1 / 53Т6 is the execution of all units included in their composition. In order to avoid damage during the flight, all the electronics are mounted with a "fill" with a polymer material, and also have some other characteristic features. All this allows the equipment to withstand overload up to 100 units. There are also means to increase resistance to the damaging factors of a nuclear explosion.

In the basic configuration of the anti-missile 53Т6 carries a detachable warhead with a special warhead. Due to the use of a nuclear warhead, a significant increase in the radius of destruction is ensured compared to conventional warheads. In addition, a large radius of damage to a certain extent compensates for the possible deviation when the missile is aimed at the target. The power of the anti-missile warhead is unknown. Different sources mention charges from 5 to 15 CT. Also in the framework of the “Samolet-M” project, a variant of a non-nuclear warhead was developed, however, such a system was not brought to use.

The product 53Т6 after completion of the assembly is placed in a sealed transport and launch container. The latter has a cylindrical shape and is equipped with a set of connectors used in the storage and operation of products. So, there are means to maintain optimal climatic parameters inside the WPC. The container also has connectors for launch control systems, fixtures for transporting and holding in the launcher, etc. 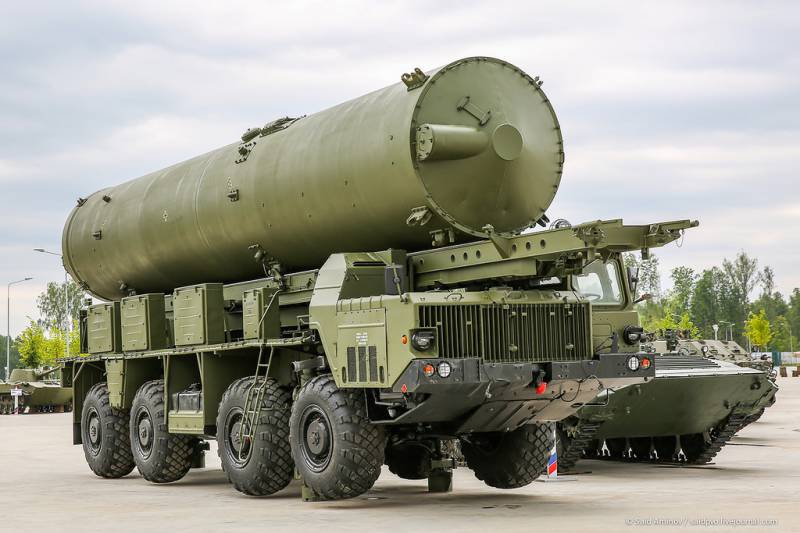 The museum sample of the transport-charging vehicle with TPK rocket 53Т6. Photo by Saidpvo.livejournal.com

The launch of anti-missile missiles is carried out from mine launchers, into which TPK with missiles are pre-positioned. The installation is protected by a sliding cover, which is discharged just before the launch of the rocket. Start is carried out directly from the container with use of the starting and march engine. When this happens, a breakthrough of both end caps of the WPC occurs with the head part and reactive gases.

For the transportation of containers with missiles, as well as for their loading into launchers, appropriate auxiliary machines were developed. Thus, the transport machine 5Т93 has fastenings for the transport of TPK of the 53Т6 rocket, and is also equipped with means of temperature control. The container is loaded into the mine by the transport-charging machine 5Т92. It has a boom and rocket movement systems, but it is not equipped with microclimate maintenance tools. Both versions of the auxiliary machines were based on the four-axle special chassis MAZ-543. Interestingly, the TZM 5Т92 with a transport and launch container for the PRS-1 rocket has recently become a new exhibit of the museum of military equipment in the Patriot park.

According to reports, the 53Т6 / PRS-1 rocket has a length of no more than 12 m and a maximum diameter of the order of 1,7 m. The launch weight reaches 10 t, of which about 700 kg is in the head. The used solid-fuel engine with a uniquely high specific impulse gives the rocket the corresponding flight characteristics. So, on the way out of the mine, the rocket only needs 0,4 from, and it only takes 4 from acceleration to maximum speed. In flight, the rocket accelerates to 5,5 km / s. The height of the destruction of targets is in the range from 5 to 30 km, the range is up to 100 km. Thus, a ten-ton antimissile intercepts a ballistic target in a matter of seconds after launch, which allows the dangerous object to be destroyed at a considerable distance from the covered area.

The A-135 “Amur” missile defense complex is still on duty and provides protection for the central industrial region and Moscow. As part of maintaining combat capability, various exercises and tests are regularly conducted. Among other things, from time to time, specialists of the armed forces produce test launches of existing missiles. With the help of the latter, an assessment of the work of the systems is carried out, which makes it possible to draw the necessary conclusions and, in particular, to extend the service life of weapons.

The latest test launch of the 53Т6 rocket took place on June 21. According to statements by representatives of the military department, the launch ended with a successful defeat of a conventional goal. Probably, this launch will allow extending the warranty periods of the available antimissiles, which will help to preserve the existing protection systems. Thus, the Amur A-135 complex will be able to remain in service for the next several years, while the industry will complete the creation of a new similar-purpose A-235 system, which is currently being developed.