From a sick head to a healthy one. Why does the topic of destabilization in Tajikistan rise?

17 2016 June
26
Today, some publications unobtrusively throw into the information space the topic of the situation in the former Soviet Central Asian republics. Interest in this region is really weak. And because any information is perceived as a breath of water in the desert. This is exactly what happened with the 201 base of the Russian army in Tajikistan. 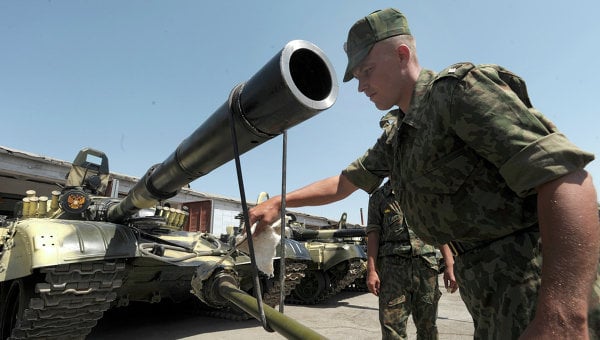 The cunning Kremlin wants to overthrow the legitimate authority in Dushanbe! Russians are preparing "Maidan" in Tajik cities and towns! 201-I changes places of deployment and concentrates far from the border! Russia opens borders for Islamic militants! I hope enough thoughts and quotes from readers.

In reality, an event occurred, which was supposed to happen. Depreciated military equipment and armament of the base were plannedly replaced with more modern models. About a hundred tanks and armored vehicles rotationally changed. How much was brought, so much was taken out. And the crews, respectively, were trained at training grounds in Russia.

In the conditions of the mountain-desert terrain weapon quickly come to a non-working state. And in order to maintain a high combat readiness of military personnel of the base, combat training is ongoing. 201-I in the Russian army - one of the best connections. Hence the increased wear technology.

For a fuller understanding of the situation, it is necessary to recall some facts about Tajikistan.

The country is bordered by several states. Uzbekistan, Kyrgyzstan, China, Afghanistan. More than 90% of the population are Sunni Muslims. The total number of citizens on 2016 year is approximately 8 with half a million people. 93% of the territory of Tajikistan is occupied by mountains.

Economically, the country is extremely weak. Constant conflicts with neighboring Uzbekistan, as well as a long civil war, have greatly undermined the economy. You can still write a lot about Tajikistan and Tajik, but still the topic of the article is different. The Russian base, which holds back many negative processes.

What else has caused the righteous anger of the liberal editions of Russia? Redeployment of one of the regiments (149 motorized rifle regiment) from the territory of the city of Kulyab to the military town of Dushanbe. Russia allegedly opens the border. Militants can take Kulyab in an hour! At the same time, parts of the 201 base will reach the city only in 3-4 hours. The poor residents of Kulyab ...

And now a question for experts. How long will attack aircraft and combat support helicopters take to fly from the Kyrgyz air base Kant to Kulyab? But today there are also not the oldest planes and helicopters there.

So why do we concentrate the main forces in one place?

The main task of units and subunits of the 201 base is not only to protect the borders, and for this purpose along the Tajik-Afghan border there are units of the Russian troops, but also to protect the most important object. Opto-electronic node Nurek. The location conditions of this object make it possible to control the space in the region almost all year round. And it is clear that for our "partners" the node is of particular interest.

In addition, after the defeat in Syria, militants poured into the northern provinces of Afghanistan. Today in the province of Kunduz, according to Kabul media reports, there are from 5 to 7 thousands of militants. And most of them come from Iran. Or they speak Iranian well. And the Tajik language is practically no different from Iranian. Yes, and control the entire border, especially in the mountains, is quite difficult. The number of Russian military in Tajikistan is about 6 thousand people.

Tajikistan today is one of the weak points in the Asian security system being created. The poverty of the country allows opponents to easily find people for their tasks. In addition, we must not forget that the Tajiks, like the residents of some republics of Russia in 90, were actively studying in foreign religious universities and madrasas. And got the appropriate training. For example, let me remind you that the commander of the Tajik riot police Colonel Halimov went to fight on the side of the ISIS militants.

So what kind of coup is preparing the Kremlin? The fact that a new "savior" of the people appeared in Tajikistan is important for us? "The founder of peace and national unity - the leader of the nation" Emomali Rahmon? From the side it is perfectly clear that today Rakhmon "plays" according to the Turkmen rules. Those amendments to the Constitution that were adopted by 22 in May are exactly what they are talking about.

However, as events in Kyrgyzstan have shown, the Russian army will not interfere in the internal political "clashes" of the Tajik elite. This is an internal affair of the Tajiks. And the assumption that the presence of Russian troops in Dushanbe somehow stabilizes the situation looks like a delusion. The main task, as it was, remains the protection of the Nurek knot, assistance to border guards in emergency situations, cutting off the drug supply channels to Russia, stopping the supply of arms to Tajikistan and Kyrgyzstan, and protecting civilians in the event of an attack by militants.

Ctrl Enter
Noticed oshЫbku Highlight text and press. Ctrl + Enter
We are
The action “Military service under the contract is your choice!” In Rostov-on-Don: future contract servicemen, exhibitions and “Russian Knights”Results of the week. “Take off your hats! Expose the head! The body will be taken out now! ”
Military Reviewin Yandex News
Military Reviewin Google News
26 comments
Information
Dear reader, to leave comments on the publication, you must sign in.