US Naval Institute: The End of the Carrier Era 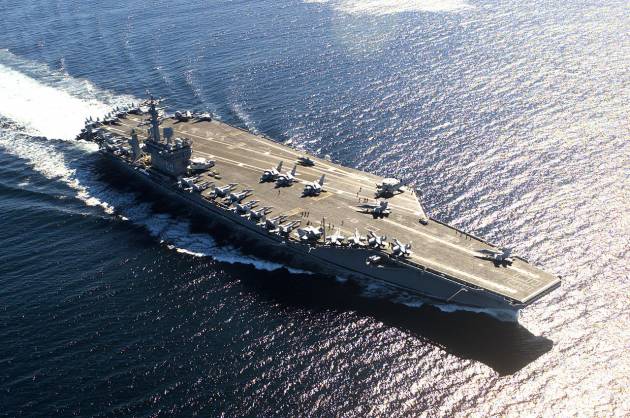 The flagships of the US Navy, the embodiment of American scope, power and flight of engineering and military-technical thought are ready to disappear from the seas and oceans. Like dinosaurs that once lived in a multitude and then disappeared completely and forever ...

Such prospects for the monsters of the American military fleet draws Ben Ho Van Beng, a senior analyst at the prestigious School of International Studies, headquartered in Singapore. It was his report on the topic of threats to aircraft carriers, published by the US Naval Institute and sounds like a requiem for the timelessly leaving the present day in depth. stories this type of ships.

Firstly, this is a fairly small deck radius aviation. Most F-18 fighter bombers (McDonnell Douglas F / A-18 Hornet) cannot retire from the base more than 500 nautical miles (926 km). And provided that the ship is at such a distance from the shore, the Hornet (as translated from English Hornet) is deprived of the possibility of penetrating deep into the territory of the enemy. If the object of the attack is not a shallow island, but a country with a "strategic depth" - then there is no sense in F-18.

Information: McDonnell Douglas F / A-18 Hornet. 1480 aircraft released. Unit cost varies between 29 and 57 millions of dollars - depending on the modification and year of manufacture.

The F-35 promised to replace him (in the American press, the development of this project does not hesitate to call it a “soap opera”), too, does not solve the problem, because its combat radius is more than 10% in the Hornet (reaches 550 offshore miles or xnumx km).

Information: Lockheed Martin F-35 Lightning II fighter-bomber. As of December 2015, the 174 aircraft was built. The total cost of the program in 2011 was estimated at 382 billion dollars. In the projection of 55 years of production of this type of aircraft today, experts estimate the possible costs of it in 1,508 $ trillion, taking into account inflation. The cost of one aircraft, depending on the modifications (there are currently three), ranges from $ 153,1 million to $ 199,4 million.

Second, the two main probable opponents of the United States — China and Russia — are developing a new generation of long-range missiles that can be “pushed” deep into the continent — the above-mentioned expert believes that they can really be launched from a distance of 800 miles (1482 km) from coast for targets that are within the maximum range of US carrier-based aviation. The line of missile defense, due to its distance from the coast, high speed and low altitude of the missiles makes them virtually invisible to aircraft carriers.

Thus, the defending side does not need to attack aircraft carriers with dozens of coastal aircraft - it is enough, according to the expert, to hit one DF-21 rocket produced by China to put a vessel with a length of 335 meters to the bottom, together with a crew of approximately 6000 people. It is difficult to say where the planes that fly away from the mission will land after that (and on their aircraft carriers of the Nimitz class from 66 to 84 units).

Planned new series - class "Gerald Ford." The first one was launched in the 2013 year. On 2019, the second is scheduled for construction. Tactical performance (TTX) is slightly different from those of the “Nimitz”.

The need to use this type of ship, in the existing conditions, disappears. Just as the need for building new ones disappears.

Help: DF-21 (Dongfeng-21, literally: "East Wind-21", according to NATO classification - CSS-5 mod.1), a Chinese two-stage solid-fuel ballistic missile. Flight distance - to 1800 km. Capable of carrying a nuclear warhead with power up to 300 kilotons. According to the US Department of Defense, China has at its disposal from 60 to 80 such missiles and 60 launchers. 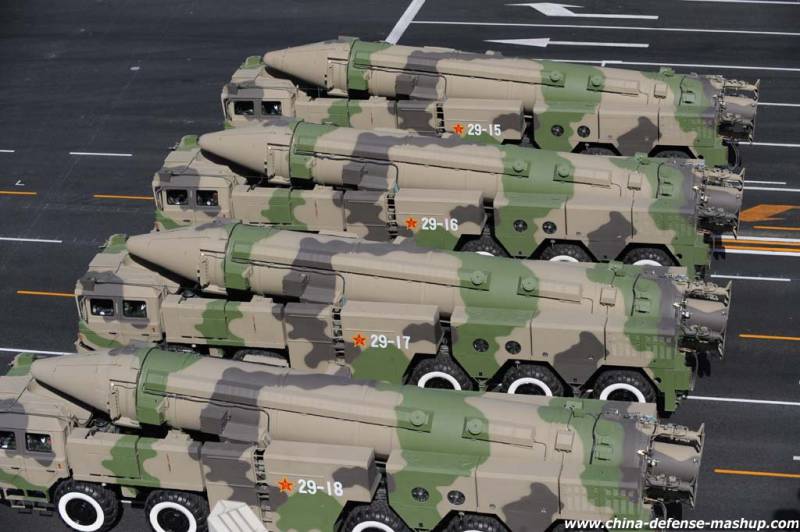 Chinese PGRK with DF-21D rocket on parade
Carriers that, by their mere appearance near enemy territory, were to inflict animal fear on the enemy and give birth in his head the only thought - to surrender, turn into a bulky vessel, suitable at best as a prop for filming. At worst - for scrap. Titans are transformed into "Titanic."

And the global program of their construction, it seems, is more for “sawing” the funds allocated by the state: few people will be able to scare someone with such armament, and it’s easy to push money offshore.

There is another reason for which the US military can insist on “continuing the banquet” with aircraft carriers - similarly in the 80 of the last century, the USA pushed the USSR to invest huge money in the program-response to the US SDI (Strategic Defense Initiative). “Star Wars” ended up being a pure bluff, but the blow to the Soviet economy was very powerful. But if today the American "Nimitz" and "Geralda Fords" unwind with the same purpose, then it is unlikely that someone in the Russian Defense Ministry will bite again on such a bait.