The forecasted needs of only the main domestic customers are about 1200 vessels and technical equipment, which are to be built before 2030. Most of them will be spent on updating and replenishing the river fleet. Shipbuilding can become the engine of the domestic economy and contribute to its qualitative change.

Already after 20 years after the Crimean War, in 1876, thanks to the talent of Rear Admiral A. Popov and the skill of the Russian shipbuilders, the most powerful battleship Peter the Great was built, and then the world's first armored cruiser, General Admiral, with a displacement of 5300 tons. Thirty years later, the Austrian economist Joseph Schumpeter summarized a similar experience of economic development and introduced the concept of innovation, defining innovation as an implemented innovation that gives a real economic or social effect.

The Crimean War of 1854 – 1856, its lessons forced the maritime powers to turn their fleets from sailing to steam. This task is solved by the Russian government. Capable administrators and young talented sailors — A. A. Popov, I. F. Likhachev, V. A. Rimsky-Korsakov, S. S. Lisovsky, who later became famous admirals — are attracted to the rearmament of the fleet. The construction of battleships begins. Creates a steam fleet.

“Over the next three years, growth in civil shipbuilding should be 23 percent”
The first Russian battleship - the battery "Firstborn" - was ordered in 1861 year in England. But after a couple of years, the same were built in St. Petersburg. A whole series is being created: two armored batteries, ten monitors, a double-towered boat.

Simultaneously with military shipbuilding, a commercial civilian direction is also developing on a new design and technological basis. In the decade after the end of the Crimean War, the Russian Sudprom was fundamentally rebuilt, entering the age of steam and iron, scientific and engineering thought, and a qualitatively different work by shipyards. This activity required joint efforts, exchange of ideas. Intellectual centripetal force was born, which led to a new form of cooperation - the Russian Technical Society, which included the most talented and passionate representatives of the maritime and shipbuilding business. As a result of the activities of these devotees, fundamentally new models were created, advanced technologies and forms of organization of production were introduced, previously unknown engineering spheres, factory professions were born.

Based on the strict definition of Schumpeter, we note that the basis of the Russian Technical Society is direct innovation, which, as the economy grows, the specialization of industries deepens, and cooperation develops, remains the core of all domestic scientific and engineering organizations that have grown out of this historical root.

NTO shipbuilders named after Krylov, having emerged as the IV department of the Russian Technical Society, throughout all the 150 years of its existence, sought to implement this fundamental trend. And in the pre-revolutionary years, and in the Soviet period, and in our days, the main task was to promote innovation.

Fairway of the domestic economy

The needs for modern ships and special equipment of the industries related to the marine and water activities are constantly increasing. The water transport and fishing fleet are in need of cardinal renewal. The forecast to 2030 of the year is on the order of 1200 units of ships and equipment.

Shipbuilding is particularly important for the development of offshore hydrocarbon deposits, including the production of exploration and production platforms (more than 30), supply vessels, technical and auxiliary equipment (over 150), gas carriers, including ice class (more than 20 units).

Wanted vessels, mostly unique, for the revival of the Northern Sea Route:


Modernization of the sea transport fleet, involving the construction of up to 230 tankers, including deadweight of more than 70 thousand tons, bulk carriers, timber carrying vessels, multipurpose and multi-purpose vessels, has been ripe. 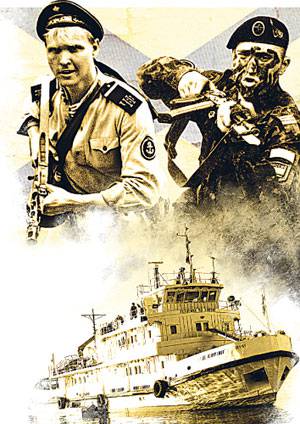 The river fleet of Russia is faced with a large-scale task of cardinal renewal, for which it is necessary to launch the river and mixed (river-sea) vessels, as well as the technical fleet, for monitoring and other state needs into the 750.

25 offshore research and development platforms are required by oceanologists and other disciplines.

Over the next three years alone, the growth in civil shipbuilding, including R & D, should amount to 23 percent and exceed 59 billion rubles in monetary terms.

Only the innovative economy of the industry can cope with such tasks. For its development, the state plans to implement the following areas:

1. Creation of a scientific and technical reserve that provides for investments in fundamental and exploratory research, taking into account the priorities of technological directions and updating the experimental base.

2. The development of engineering, based on the design of products for a given cost, competitiveness, seriality and use of domestic intellectual property.

3. Import substitution based on the development of new industries and localization of existing ones.

One of the most important problems of creating a domestic Arctic fleet and marine equipment for the development of offshore fields in high latitudes is new shipbuilding materials. Solving the problems in this area requires the use of recent advances, in particular nanotechnology. A great success of scientists and manufacturers was the production of sheet steel with elements of nanostructure. Know-how is used in the construction of unique drilling platforms "Prirazlomnaya" and "Arctic". In addition to providing high properties (weldability, frost resistance, plasticity, etc.), these works open up the possibility of unifying the chemical composition of steels and, consequently, reducing their cost. 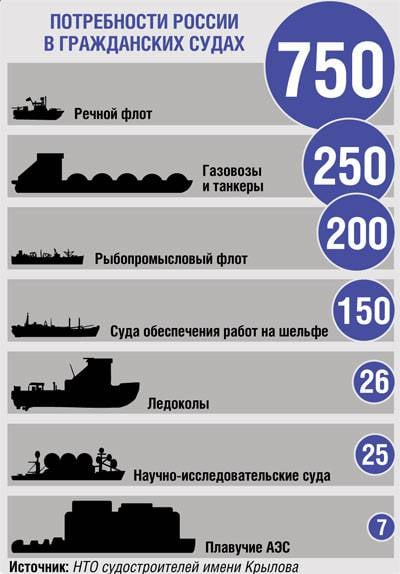 The practice of operating the Arctic ships poses new challenges to improve the efficiency and safety of their work in high latitudes, in the ice. Conducted research allows us to offer unconventional solutions. So, to ensure the ice strength and reliability of transport ships in the conditions of year-round navigation, domestic science creates active means of protecting the hull. It is provided with new information technology approaches to solving problems of this class, including interactive control during operation. Along with the traditional mathematical methods, the achievements of artificial intelligence are applied. An important role belongs to information processing technologies in a multiprocessor environment, which allows the intellectual system to understand the complex processes of the vessel’s interaction with the outside world, to model its actions and learn from its own experience. These and other know-hows contribute to the creation of marine technology with new consumer qualities that take Russia to the forefront of Arctic shipbuilding, ensuring the industry’s high competitiveness in this niche of the world market.

An example of large-scale technological innovations supported by the NTO potential of shipbuilders named after Krylov is the construction of domestic gas carriers. The technical issues of preparing such a production in Russia have been successfully resolved.

An important direction was the introduction of organizational and managerial innovations:


The most promising undertakings receive targeted support from the Committee on the Search and Approval of Innovative Projects that is part of the Krylov NTO. In 2014 and 2015, nine such projects are considered. Two of them are already being introduced into industrial production. The rest are in various stages of development by potential investors.