7 2016 June
32
On Sunday, June 5 in the suburbs of Astana ended the exhibition of weapons and military technical equipment KADEX-2016. The list of participants is more than representative. Representatives of 316 companies from different countries of the world, including Russia, China, France, Belgium, Turkey, Denmark, Germany, the Czech Republic, Ukraine, etc., arrived in Kazakhstan to demonstrate their developments.

This is a multiple rocket launcher system, dubbed "Wide Spectrum". And this name, in fact, speaks for itself. In the conditions of far from unlimited funding, Kazakhstani specialists decided to create the MLRS, which has a universal modular type. The launcher chassis was originally designed with such an “aim” that the MLRS could use different modules for firing different ammunition.

In fact, the MLRS "Wide Spectrum" is an upgrade (or more precisely, bringing to mind) the version of the Naise multiple launch rocket system, which in Russian sounds like "peak" or "spear." The development of the Naiza-based MLRS began more than 10 years ago in cooperation with the Petropavlovsk Heavy Engineering Plant (PZTM) and the Israeli company Soltam Systems Ltd. Despite the fact that after more than a year after the start of cooperation, there was talk that the company Soltam Systems Ltd. preparing to takeover by another Israeli company Elbit Systems, the designs were not folded. And in 2008, a new multiple rocket launcher system began to flow into service with the Kazakh armed forces. True, with a big "creak" ... 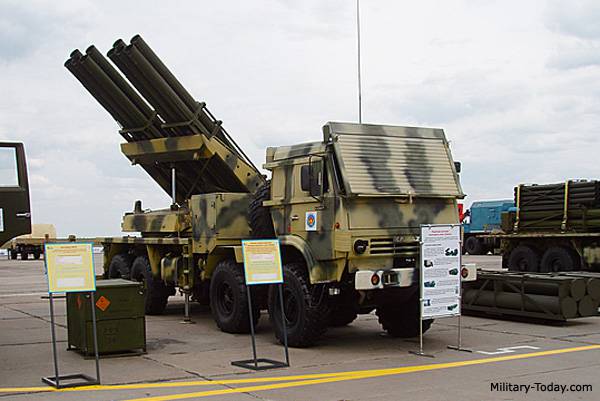 The main idea of ​​the new rocket launcher system was not just modularity, but also to optimize the cost of maintaining rocket artillery in the armed forces of Kazakhstan. After all, the MLA "Naiza" was conceived as a complex that can fire ammunition of various calibers - both the "Gradovsky" 122 mm and the "hurricane" 220 mm, and the calibers in 300 mm (Smerch, as well as some Israeli variants). In other words, the MLRS Naiza is an actual attempt to integrate Soviet and foreign (including Israeli) developments of the rocket artillery segment.

Is such a development justified? Full If we take into account that the Kazakh army is equipped with various versions of the MLRS of the Soviet technology, then in order to infuse modern potential into them, you can afford to experiment with a universal platform. The task of this kind of integration of properties and qualities was solved by the specialists of JSC NC Kazakhstan Engineering, a subsidiary of which is the aforementioned Petropavlovsk Heavy Engineering Plant.

What did “Nise” bring to the end? Firstly, the Wide Spectrum complex is equipped with an automated fire control system. Secondly, navigation and topography facilities, including the satellite capabilities of the Russian GLONASS, allow for more effective fire in squares and not only. In particular, both destruction and suppression of point and area targets, including manpower, infrastructural objects and fire means of the opponent, are provided. The range of destruction of targets is from 10 to 150 km. It should be noted that the initial declared range of “Nizy” is up to 180 km.

The convenience of the system, according to the developers themselves, is that the transport-charging vehicle is capable of replacing a block with only guides (for ammunition of one caliber) with a block with other guides, with packet (already charged), for a minimum period of time. Given the fact that the MLRS "Wide Range" can be used for firing and certain types of cruise missiles - the stated maximum target destruction range in 150 km may be higher.

If we touch on a modernized fire control system, then it has the ability to integrate with military systems of intelligence, navigation and communications. In fact, the network-centric system is created by both the above-mentioned satellite system and the group of unmanned aerial vehicles. This allows you to effectively adjust the fire, share data on the results of the use of MLRS with other fire groups. If the data from the entire system is accumulated in a single command post of the operation, then it becomes possible to exchange data for the timely changing of the MLRS “Wide range” positions and firing. It is also possible to determine the most effective in terms of caliber used (in a given situation in the theater of operations) combat modules.

About the time of preparation for shooting and changing the combat module. After placing on the position of the MLRS "Wide spectrum" by the calculation of the three people is deployed to full combat readiness within 4-5 minutes. Much of this time is spent on preparing the entire on-board electronics, in particular, on synchronizing it with the command center and the unmanned intelligence systems. The time required to replace the “shot out” block with guides with a new one is about 8 minutes. In this case, an important issue is the issue of the place of recharge. After the order received from the command post with the launcher changes the position where the reloading takes place, in order, of course, to bring the launcher out of the enemy's retaliatory strike. Another option is to change the combat module on the spot at the time of the operation of other MLRS of the same battery or installations of other batteries, which actually solve the tasks of both destroying the enemy and covering the process of changing the module.

The base chassis for the "Wide Spectrum" - KAMAZ-63502 8х8 with HP 347 engine power. If for the use of ammunition calibers 122 mm and 220 mm such a chassis can be considered optimal, then in the case of more significant calibers it is unlikely that it will respond with its 100% stability. In this regard, a variant with a heavier platform that will not be its vibration when firing with a combat module reduces the effectiveness of such fire to a minimum, and also does not raise questions about the high probability of violating the integrity of the platform bottom when firing, for example, with 300 caliber .

It was the safety of the use of the Kazakh-Israeli MLRS for its crew that caused questions after the first operational firing. At one time, this did not allow for the implementation of the widely announced plans of Astana to export Niza in the country of the CIS and Southeast Asia. Moreover, corruption schemes were revealed, in which representatives of the top leadership of the Ministry of Defense of Kazakhstan, including Deputy Defense Minister Kazhimurat Mayermanov, were implicated.

From the report of the National Security Committee of Kazakhstan from 2009 year:
Within the framework of the criminal case, the actions of officials of the Ministry of Defense, who were allowed to conclude and execute a number of contracts with Israeli firms IMI and Soltam Systems, to acquire Naiza multiple rocket launchers and to upgrade Semser and Aybat artillery systems are being investigated. The official representative of which is Boris Sheinkman.

This criminal case was initiated in August 2008 of the year following a follow-up audit of the materials of the Accounts Committee of the Republic of Kazakhstan on the facts of ineffective use by the Ministry of Defense of the republic of budget funds amounting to more than 82 million US dollars.

The investigation found that the contracts were concluded with 2006 of the year under the direct supervision of the Deputy Minister of Defense, General-Lieutenant Kazhimurat Mayermanov.

After the first firing before 80,% of the installations failed, and the developers began to fix the flaws and errors that had been made. Despite the fact that it was mainly about the Semser artillery systems, and despite the fact that critical problems with stability and security were largely solved at Nais (at least, the developers themselves said so) technical scandal still haunts the MLRS "Naiza."

If the developers still managed to find the optimal solution from the point of view of the operating safety of the Wide Spectrum, then in the near future we can expect a possible conclusion of contracts for export. However, news of the conclusion of such contracts after the KADEX-2016 exhibition has not yet been received.

Ctrl Enter
Noticed oshЫbku Highlight text and press. Ctrl + Enter
We are
The action “Military service under the contract is your choice!” In Rostov-on-Don: future contract servicemen, exhibitions and “Russian Knights”The result of cooperation between Israel and Kazakhstan: Naiza rocket launcher
Military Reviewin Yandex News
Military Reviewin Google News
32 comments
Information
Dear reader, to leave comments on the publication, you must sign in.