Perspective machine for the army

8 2016 June
107
For many years now, there have been discussions about what should be the promising machine gun of the Russian army. How many copies are already broken in battles on specialized sites and on television! Every year we are presented with a "newest model", which has no analogues in the world. And nothing has changed. The army is still armed with the old and reliable AK-74 of various modifications, which originates from the legendary AK arr. 47 g. Who now remembers the "unparalleled" AN-94, the "newest" AK-200 with a hinged lid of the receiver or a family weapons chambered for 6X49 mm. Now everyone knows only AK-12 and А-545, which are being tested for the right to become the main small arms for the next decades. So let's see which of the two applicants is better, and whether a new machine is needed at all.


Let's start with stories competition for a new machine. Back in the war years in Afghanistan, it became clear that the AK-74 based weapon family is the ultimate in the AK family. And no tricks of the design will radically improve the performance characteristics of the machine. It was decided to hold a competition under the code "Abakan". Leading designers presented their achievements. The main innovations were automatic machines with balanced automation and offset recoil. The automatic machine with balanced automatic AEK-971 did not reach the final due to problems with the balance mechanism resource. The final came out the development of Gennady Nikonov (ASN machine gun) and the development of Igor Stechkin (TKB-0146). Both machines had automatics with a displaced recoil impulse and had two rates of fire. According to the results of the competition, the sample won by Nikonov (ASN), which after modifications and was adopted by the army of the Russian Federation under the name AN-94. But in the difficult for the country 90-e army was not up to the new machine ... 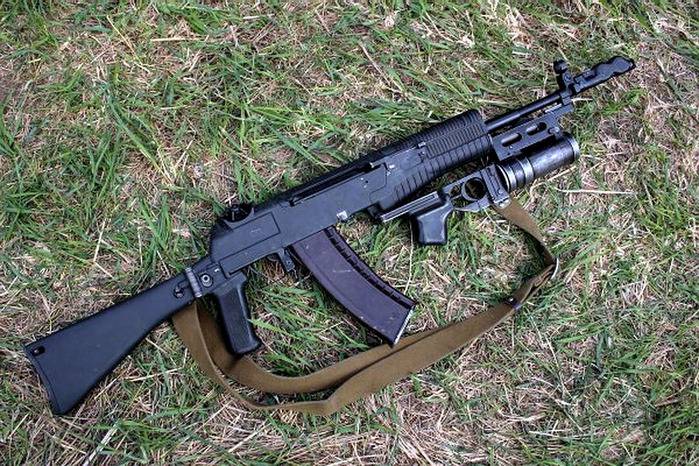 The machine gun is remarkable in that it has two rates of fire - 1800 / 600 v. / Min. When shooting using regular cartridges 5,45x39 mm. The machine gun consists of two parts: a firing unit with a barrel and a bolt group, as well as an external "casing" with guides. When the first shot is fired, the firing unit starts to move back, the cartridge case is thrown out, the trigger is cocked, and a new cartridge is sent to the chamber. The secret of the rate of fire (1800 v. / Min) is that the second cartridge is sent much faster due to the smaller distance between the magazine and the firing backward unit. The second shot occurs while the shooting block is moving backwards, and the recoil momentum from two shots is summed at the end. So the first two shots occur when shooting in automatic mode, the subsequent shots are made with the tempo of 600 in. / Min. The first two bullets fly very closely and provide a high probability of hitting the target, dispersing the rest of the queue’s bullets slightly less than AK-74 due to a more efficient compensator and recoil buffers. I wouldn't call the automaton "unparalleled". During these years, a competition for a new assault rifle was held in Germany. It involved the HK G11 rifle with a similar principle of operation of the automatics, but firing the cartridgeless caliber 4,73 mm. The rifle had a rotating chamber and a plastic case, cocked by rotating the handle on the butt. From the perspective point of view, the German model was more interesting than the Soviet one, but problems with the resource of the barrel, the unique cartridge and the probability of self-ignition of the cartridge were not solved. Soon the project was closed due to the collapse of the ATS and the unification of Germany. The Russian machine gun was released in a very limited series and was never able to replace the AK-74 in the army. The automatic machine was distinguished by a rather high cost and design complexity, although it was fairly reliable. 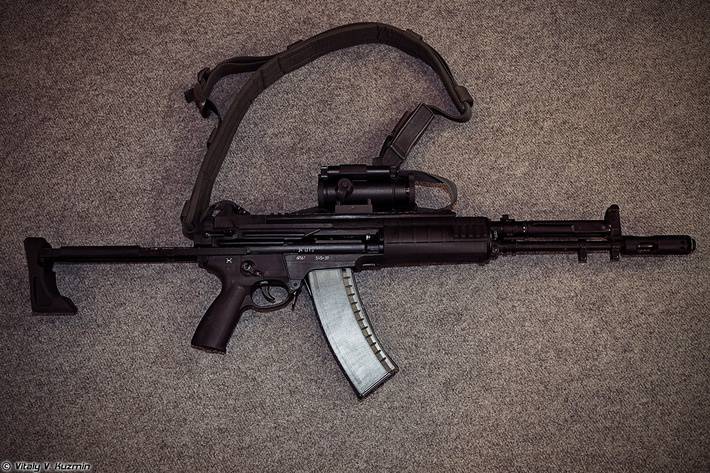 The next model is the A-545 machine gun. Its direct ancestor is AEK-971. This is a machine with balanced automation. According to the design, it differs from the usual AK family by the presence of a moving anti-mass equal to the bolt group in mass. When fired, the counterweight and bolt group move in opposite directions and quench each other's impulse. Compared with the AK-74, the accuracy of automatic fire increased many times, but the accuracy of the first two bullets is inferior to the AN-94 machine gun. The machine turned out to be somewhat heavier than the AK-74, but is lighter than the AN-94, the rate of fire increased from 650 rpm to 900-1000 rpm, and has a cutoff mode for 3 shot. Judging by the nomination for the competition, the problem of the survivability of the gear that connects the bolt group and the anti-mass has been solved or removed to a significant extent. In my opinion, A-545 in the resolution of problems with survivability is the most progressive example.

The latest and least interesting example is the AK-12. It differs from the AK-74 in more comfortable ergonomics, the presence of a fire regime for the 3 shot, a rigid receiver cover and an increased accuracy of fire. A radical increase in the characteristics of the weapon did not happen. By the accuracy of the automatic fire, it is still inferior to A-545 and AH-94, the problem of ergonomics is partially solved by installing a good body kit; . Nothing fundamentally new (multi-caliber, modular design) has been demonstrated. In the case of mass production, the army will receive a weapon that is not much better than the AK-74, and this with proper quality control at work.

AH-94 and A-545 seem to me much more promising. They are not required to be stamped in tens of millions of pieces, and, in addition, they can begin to be exported. It is enough to equip them with a regular army and the National Guard. AK-74 should remain the main weapon of the Russian army in case of a big war. The idea of ​​upgrading millions of warehouse AK-74 / AK-74М seems to be more interesting to me by installing a high-quality body kit at the price of $ 300-400. At the same time, the automaton in its qualities will approach the AK-12 at a much lower cost.