7 2016 June
5
After the successful completion of the French campaign, in which the newest self-propelled artillery installations with 150-mm guns were actively used, the German command decided to create several new systems of this class. Given the new threats appearing on the battlefield, over time, the requirement has arisen to develop self-propelled guns with a high level of protection. These requirements were later implemented in the new project Sturminfanteriegeschütz 33B.


According to reports, the Sturminfanteriegeschütz 33B or StuIG 33 Ausf.B project was the result of processes that took place in the highest circles of Germany in the fall of 1941. It all started with the fact that Ferdinand Porsche made a new proposal to install a 150-mm gun on the chassis of one of the existing tanks. This proposal was generally approved by the command of the armored forces and artillery, but did not immediately lead to the start of work. Only a few weeks later, the command approved the development of a new project, and also determined the volume of construction of new equipment.

Interestingly, the implementation of the proposal F. Porsche was entrusted to its competitors. To develop and build new armored vehicles, Alkett should have been. Porsche, in turn, had to fulfill existing orders and engage in other projects. The command required the creation of an ACS based on a medium tank Pz.Kpfw.III or Pz.Kpfw.IV with enhanced armor, armed with an 15 cm sIG L / 11 gun. Like weapon has already been used in the composition of self-propelled systems and is well proven. Through the use of relatively new chassis and enhanced booking, the customer wanted to increase the mobility and vitality of the new technology. 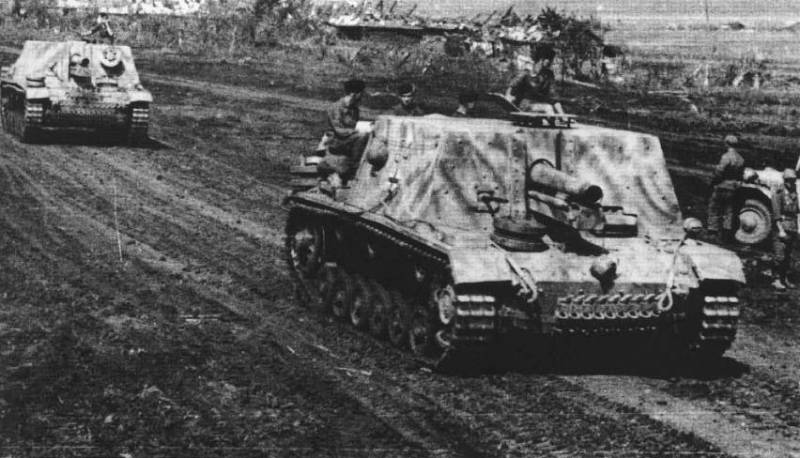 The new project received the official designation Sturminfanteriegeschütz 33B - "Assault infantry weapons." It is noteworthy that such a name was derived from the designation of the used gun, whereas the type of the base chassis did not get into it. Perhaps such a non-standard approach to the name of the project was due to the fact that at the time of determining the name the chassis was not yet selected for the prospective car.

As the basis for the new self-propelled artillery, the medium tank Pz.Kpfw.III of the modification “E” or “F” was chosen. For the installation of new equipment chassis had to undergo some changes. At the same time, in order to simplify the project, it was proposed to change only the design of the case. The power plant, transmission, chassis and a number of other systems were to be used in its current form, which allowed building self-propelled guns on the basis of serial tanks.

The hull of the existing tank was to be deprived of the turret and the turret box. Instead of them, an armored cabin should be mounted on the hull to accommodate the combat compartment. The cabin was proposed to be made of several armor plates, installed with a slope inward, there was also a vertical stern sheet. Unlike previous self-propelled guns for sIG 33 guns, the new machine was supposed to receive the roof of the fighting compartment. For an additional increase in the volume of the combat compartment, the logging boards were installed with the sideways spacing and formed developed nadgusenichnye niches. 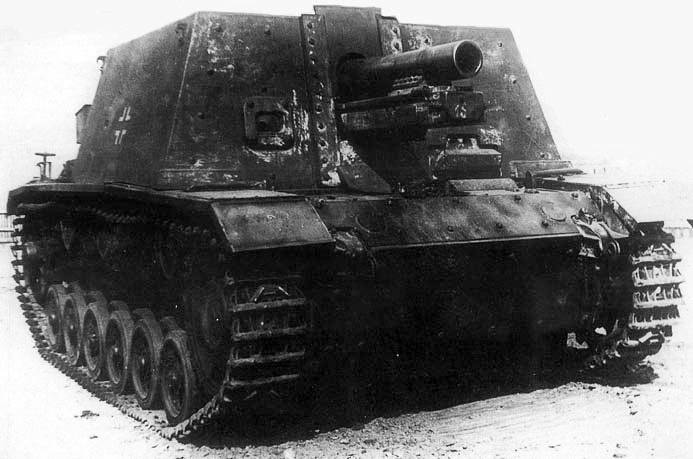 Before cutting, the front sheets of the hull remained, while the upper part with the viewing device of the driver was replaced by the front cutting plate. The rest of the hull design of the new ACS corresponded to the base tank. Also remained the same protection performance. The main body of the body had 30-mm front sheets and sides. The stern was made of 15 mm thick parts. The felling protection matched the body: 30 mm for forehead and sides, 15 mm at the stern and 16 mm for the roof. In addition, it was proposed to strengthen the frontal parts of the combat vehicle with additional armor plates. 50-mm sheets should be fixed over the existing armor. According to others, the frontal part of the cabin was made of a single sheet 80 mm thick.

The layout of the case was changed slightly. In front of the case were placed transmission units, and in the center there should have been a manned compartment, uniting the command and control sections. The feed was still intended for the installation of the engine, fuel tanks and other systems.

Depending on the specific type of base chassis of an ACS, StuIG 33 Ausf.B was supposed to receive a Maybach engine of the type HL 120TR or HL 120TRM with an 300 hp power. With the help of a mechanical transmission based on the five-speed gearbox ZF Aphon SSG46, the transmission of torque to the drive wheels was provided. 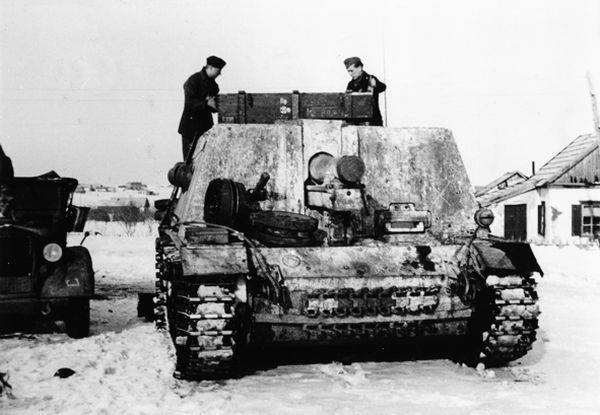 The running gear was preserved on the basis of six small-diameter support wheels with an individual torsion bar suspension. There were also front drive wheels with right-hand gearing, rear guide wheels and three supporting rollers on each side.

In the front part of the cabin there was an installation with an 15 cm sIG 33 L / 11 instrument. To mount the gun on the new chassis, we had to develop an updated version of the mounts and guidance systems. As part of this equipment, there were some units borrowed from the base gun carriage, but they had to be seriously refined. The barrel of the gun was placed in the slots of the frontal cutting sheet, additionally protected by a movable mask. Manual guidance drives allowed firing within a small horizontal sector with different pointing angles. The Rblf36 sight used on the towed gun and in its self-propelled versions was saved.

The 150-mm gun sIG 33 was equipped with a barrel of 11 caliber length, had a horizontal sliding gate and used separate loading ammunition with variable propelling charge. The calculation had the possibility of firing high-explosive fragmentation projectiles of several types, including reinforced above-caliber. There was also a smoke projectile, and in the foreseeable future a cumulative should have appeared. When firing at an initial projectile speed of up to 240 m / s, the sIG 33 can attack targets at ranges up to 4,7 km. His goals were manpower, fortifications, and enemy armor. 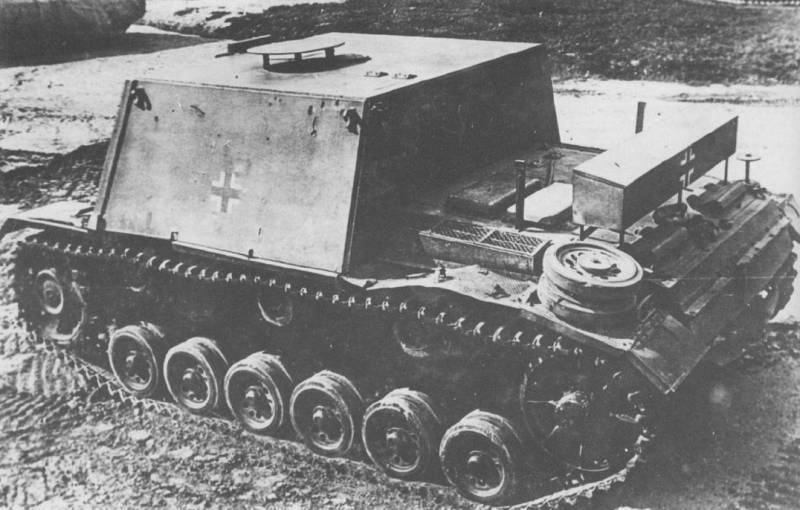 View of the stern and roof. Photo of Wikimedia Commons

The dimensions of the fighting compartment made it possible to arrange stacking in it for the placement of 30 shells of separate loading. Ammunition should have been located in several racks in different parts of the cabin.

ACS Sturminfanteriegeschütz 33B became the first carrier of 150-mm guns sIG 33, which managed to get additional weapons for self-defense, constantly ready for use. In the front cutting room, to the right of the gun, there was an embrasure for mounting the MG 34 machine gun. Ammunition for the machine gun was 600 ammunition.

The crew of the new self-propelled guns included five people. In front of the cabin, to the left and right of the gun, the driver and radio operator, respectively, were to be placed. To the left of the gun was placed the workplace of the commander, who was responsible for pointing the gun. In the stern of the fighting compartment there were two loaders. To get to their seats, the crew had to through the only common hatch in the roof of the hull.

Improvements to the design associated with the installation of new units, did not lead to a serious change in the dimensions of the machine, but it affected its combat weight. The length remained at the level of 5,4 m, width - 2,9 m. The height of the roof of the cabin was equal to 2,3 m. The combat weight increased to 21 t. was to reduce the mobility characteristics, although the maximum speed remained at the level of 19,5-35 km / h with a power reserve of the order of 40 km.

In September 1941, the command ordered the assembly of the first batch of Sturminfanteriegeschütz 12B 33 machines. It was necessary to complete the order as quickly as possible, however, the construction was completed only by the end of the year. In December, a dozen self-propelled guns were handed over to the customer. The basis for these machines were serial tanks Pz.Kpfw.III modifications "E" and "F / 8" (according to other sources, self-propelled guns were built on the basis of repaired StuG III chassis). The base tanks of the two modifications differed slightly from each other in the design and composition of the units, but were generally similar, which did not lead to the appearance of significant differences between self-propelled guns based on different chassis.

According to reports, the new self-propelled guns StuIG 33 Ausf.B successfully passed the tests and were ready for use in the military, but for a long time remained in the rear. While the command was deciding whether to send this vehicle to the front and where to use it, an order appeared for a second batch of self-propelled guns from the 12. This technique was ordered in September 1942 of the year, and by the end of the autumn the order was fully completed. 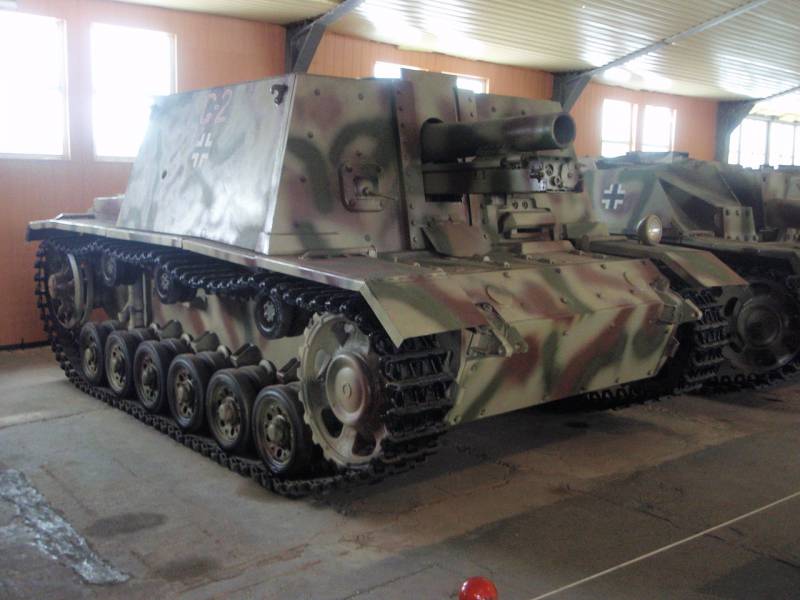 By early November, it was decided to send the first 12 machines to the front. Self-propelled guns were to take part in the hostilities in the area of ​​Stalingrad. StuIG 33 Ausf.B of the first batch was consolidated into a company with the 177 battalion of assault guns. Due to the existing situation in the area, the new SAU had to fight in urban conditions. Later, the self-propelled guns that remained in the ranks continued their service and, together with a number of other units, were surrounded.

Over the next few months, new equipment was used in battles with varying success. The offensive of the Red Army led to the fact that a lot of units and formations of the Wehrmacht were surrounded. Together with other units, the 177 Battalion of assault guns also ended up in the boiler. During the liquidation of the boiler, all remaining armored vehicles were destroyed or captured as trophies. One of them was taken by the Red Army with minimal damage. Soon she was sent to the test site.

In the winter of 1942-43, the second dozen self-propelled guns of the Sturminfanteriegeschütz 33B were handed over to the 17 battalion of light assault guns. During the first half of the year, the 1943 technology was transferred to other divisions several times. Operation of ACS with 150-mm guns was associated with permanent losses, which led to the corresponding consequences. According to various sources, the operation of the latest StuIG 33 Ausf.B machines continued until October of the 1943 year or until the spring of the 44. By this time, all the machines of the second batch died during the fighting. 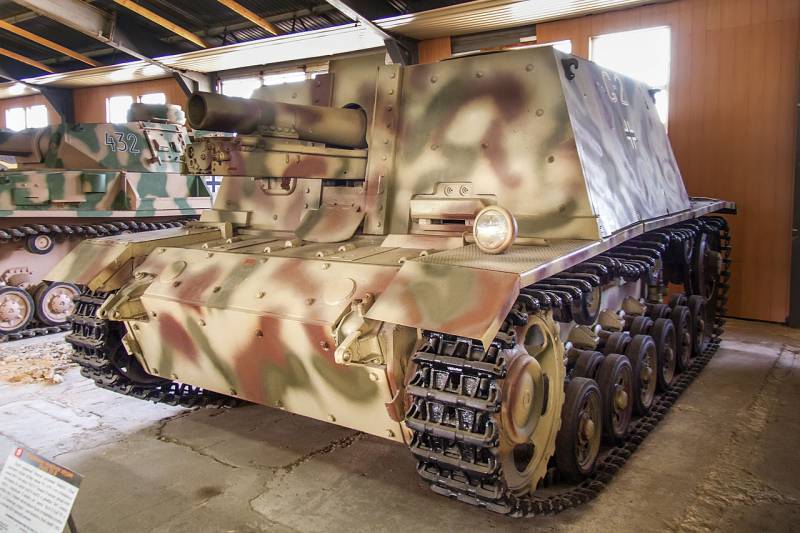 The only remaining SAU StuIG 33 Ausf.B. Photo of Wikimedia Commons

During 1941-42, Alkett built only 24 self-propelled artillery mounts Sturminfanteriegeschütz 33B, which were used with varying success by several ground forces units. The service of the cars of the first batch lasted only a few months and ended in a boiler near Stalingrad, and the second dozen self-propelled guns were used at least until the autumn of the 43.

Only one type of machine, Sturminfanteriegeschütz 33B, survived the war. This sample of German technology was captured by the Red Army during the liquidation of the boiler in the Stalingrad area. Almost not damaged car was studied by Soviet experts, and then went to storage. This self-propelled gun exists now, being an exhibit of the armored museum in Kubinka. Other cars of this type could not even become trophies, being destroyed during the fighting.

Despite the small number of machines built, the Sturminfanteriegeschütz 33B project can be considered one of the most successful SAU options for 150-mm sIG 33 guns. This machine, unlike its predecessors, was built on a fairly successful chassis with high performance, and also received a powerful booking. Moreover, in terms of protection, the self-propelled gun significantly exceeded some modifications of the Panzerkampfwagen III base tank. However, for various reasons, it was possible to build only 24 self-propelled guns of this type, which was not enough for the full rearmament of troops with corresponding consequences for the situation at the front. Thus, the high potential of the project was completely leveled by a small number of serial equipment.