5 2016 June
10
Long time there were no materials about any military-technical exotic. To interrupt a long pause, I will post a selection of pictures and photos on the topic of Spanish pre-war tanchiki. It is curious that in the former Spanish colony - Mexico, the first tank was modeled after the British "rhombuses" as early as 1917, almost 10 years earlier than in Spain itself. True, there is very little information about this wonderful machine, armed with the Hochkiss revolving gun and two machine guns, and even that of unknown origin. Obviously, the Mexicans are not so interested in their military историяto spend time searching the archives.


And the first Spanish tank Trubia modelo A was assembled only in 1926 at the state cannon factory Trubia according to the design of the artillery captain Ruiz de Toledo. Over the next eight years, three more prototypes were leisurely riveted, markedly different from each other. Up until the mid-30s, this was what the Spanish tank building limited to. In 1936, an improved model appeared. tank Trubia M36, aka Trubia Naval, aka Euzkadi. The word Naval (marine) appeared in the designation due to the fact that these tanks were made at a shipyard in the city of Sestao. And Euzkadi (Euskadi) is the name of the Basque Country in the Basque language, since Sestao is located on its territory.

Almost nothing is known about Trubia M36, except that they were released up to the capture of the Basque Country by the Francoists in 1937 and used on the Northern Front of the Spanish Civil War. According to various sources, they managed to make from 12 to 25 machines, although, in total, 48 was ordered. The first five of them in April 1937-th entered the mixed armored battalion of the Basque Republican Army. By the end of the battles, the Francoists got nine tanks as trophies, the rest, apparently, had been destroyed. The further fate of the trophies is not described anywhere. 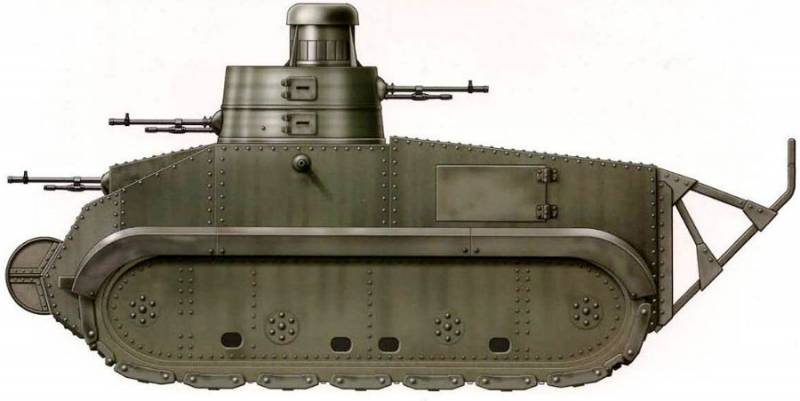 One of the prototypes of the Trubia model is A. The tank had a crew of three, and its armament consisted of three Hotchiss machine guns. Two of them were placed in the original "two-story" tower, consisting of two armor rings, which could rotate both synchronously and independently from each other.
Installed on the roof strobe observation device. The rear "tail" is intended to pierce the ditches and trenches, and the sharpened disk reinforced in front to cut the barbed wire. On the first prototype, there was a car 40-strong engine "Hispano-Suiza", which allowed to reach speeds of 18 km / h, and on the rest - German Daimler engines with 75 horsepower, with which these tanks accelerated to 30 km / h . 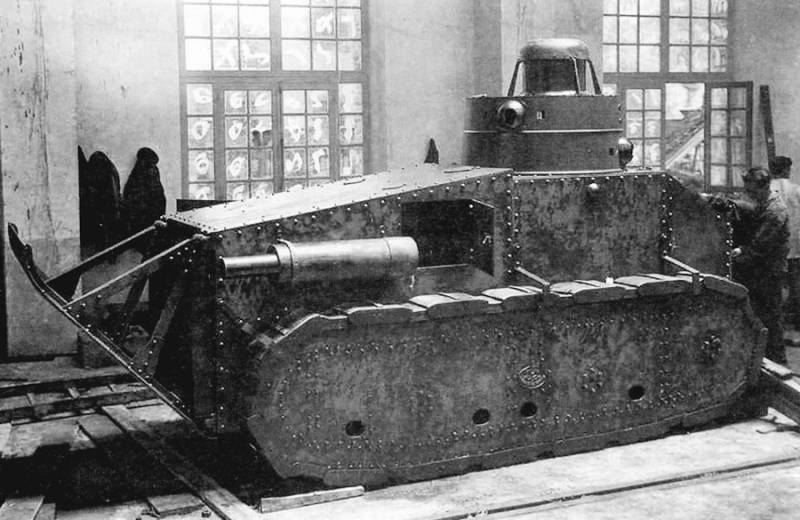 Assembling one of the prototypes of the Trubia model from A. 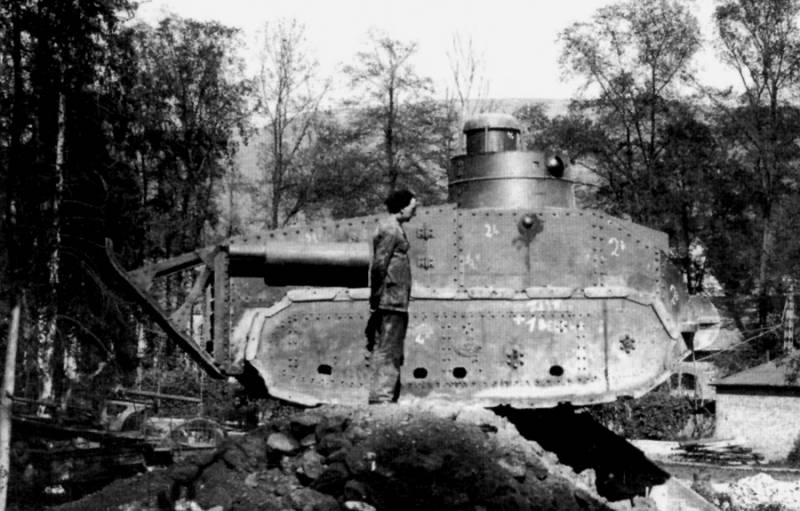 Trubia modelo A on trial. 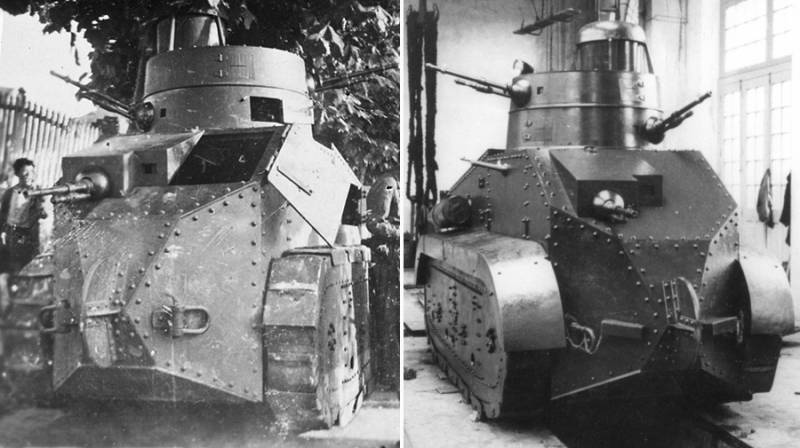 Front view of two prototypes. It can be seen that on one machine there is a front hatch of the driver, which is absent on the other model. But the second machine is equipped with mud shields.

All four prototypes of the Trubia model A participated in the civil war, three of which went to the rebels in a warehouse in Oviedo, and one remained in the hands of the Republicans. One can only guess whose tank is visible in the photo. 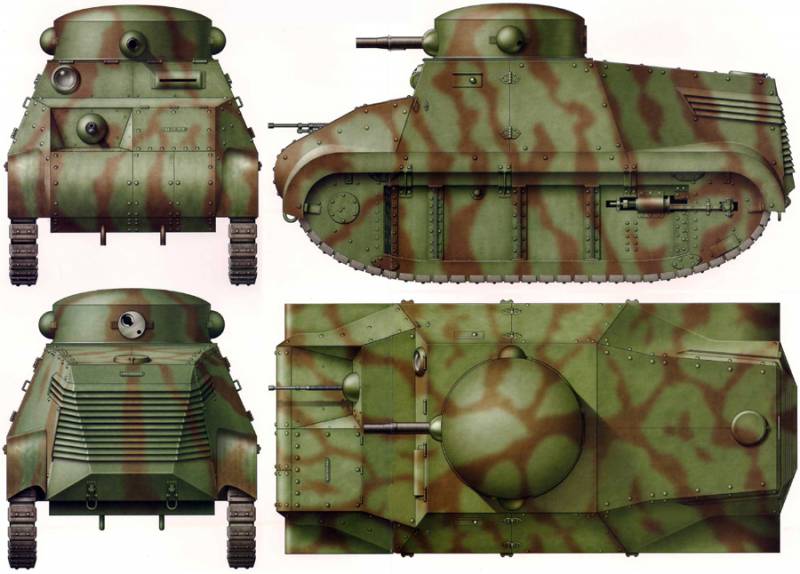 Trubia Naval in four projections. On the tank there was an ordinary tower with one machine gun and without a stroboscope. Another machine gun reinforced in the front hull sheet. Trubia Naval was equipped with Lewis machine guns of an infantry model or Soviet DTs taken from downed T-26 tanks. The vehicles were equipped with German 120-strong MAN engines and developed speeds up to 40 km / h. They had a very peculiar depreciation system - it was not the support rollers and not the suspension elements that had been suspended, but tracked tracks. Each of the 56 tracks was connected by a coil spring with a support carriage rolling along the guide rails on four rollers. 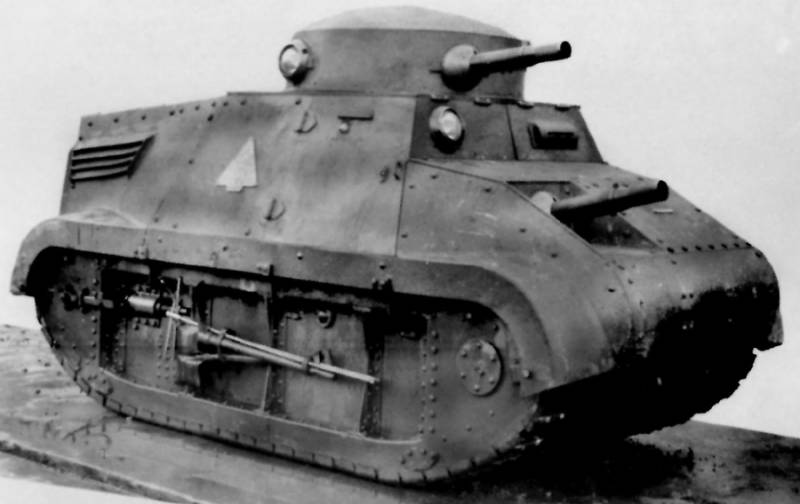 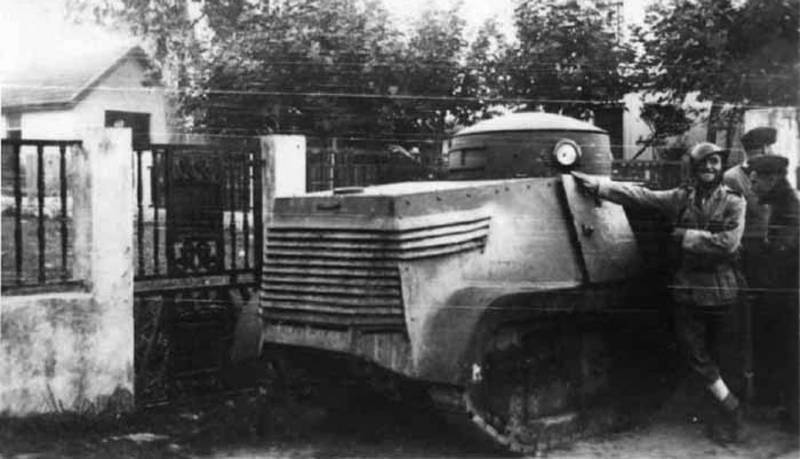 The picture shows that Trubia Naval was very compact, smaller than the Trubia model A, but they write about it that it remained triple. It is not entirely clear how three people could fit, and even work in front of such a small building. 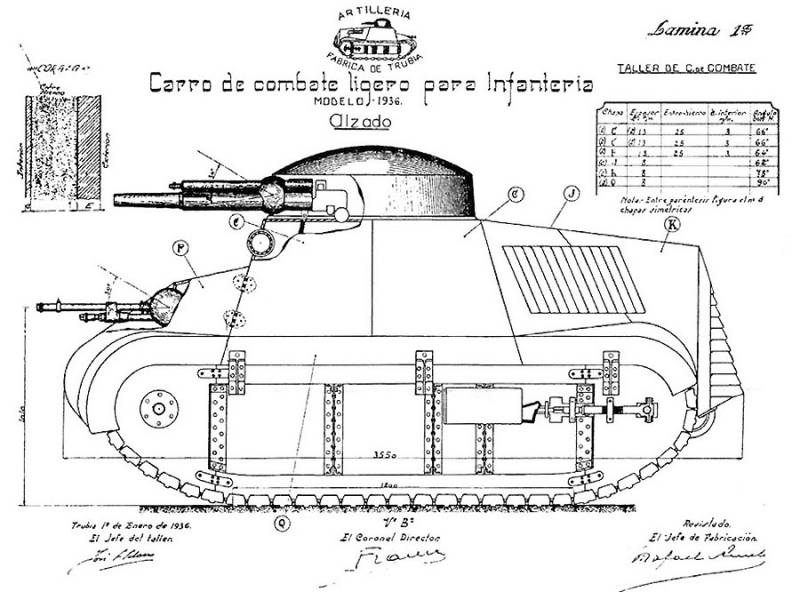 Unrealized project Trubia with a gun tower. At the top left there is a reservation scheme, from which it can be seen that the tank had spaced armor consisting of an internal steel sheet 13 mm thick and an external one - three millimeters separated by a layer of some intermediate material, possibly wood or cork.

In conclusion - another Spanish wonder tank of the civil war, about which nothing is known, except that it was built, presumably, in the city of Huesca, armed with a turret machine gun and was called Barbastro. I did not find normal pictures of this unit.
I also note that during the Spanish civil war various “self-made” armored tractors were actively used, but this is a separate topic, which I decided not to touch yet.

Ctrl Enter
Noticed oshЫbku Highlight text and press. Ctrl + Enter
We are
Republican and nationalist tanks in the civil war 1936 - 1938 (part of 1)From French "diamonds" to French "Christie"
Military Reviewin Yandex News
Military Reviewin Google News
10 comments
Information
Dear reader, to leave comments on the publication, you must sign in.