2 2016 June
30
It is unlikely that anyone needs to prove the importance of camouflage. And now, and at the very beginning of the last century, whole institutions worked on how to make their technology invisible from the enemy. Ships masked by coloring according to Wilkinson and Shpazhinsky, but Tanks, the tanks were painted very whimsically, and sometimes, on the contrary, in a dull gray color, everything, they say, depends on the terrain. 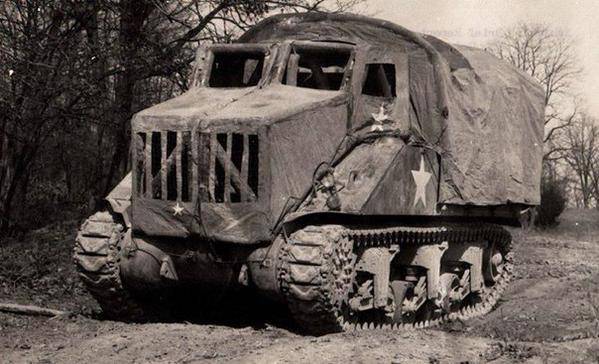 American tank "Sherman" disguised as a tracked carrier. Even close not very much and you will discern what it is, but from a distance, well, just a truck!

Another way of masking steel layouts. The tanks are in one place under the hay bales, and their mock-ups of plywood, boards, and even stones (as the Japanese did in Okinawa) in another. In Germany, during the years of the Great Patriotic War, they even released a manual on how to make tanks out of snow, since there are many of them in Russia. And all this would be very good, if not for one big "but." Such a masquerade did not usually protect the tank itself. That is, defended, but only to some extent. It would be much more interesting to do so, let's say, a real battle tank would look like ... a city bus. The enemy would not have noticed anything, came very close to him, and that one - bang, and the enemy was gone, some smoking debris. 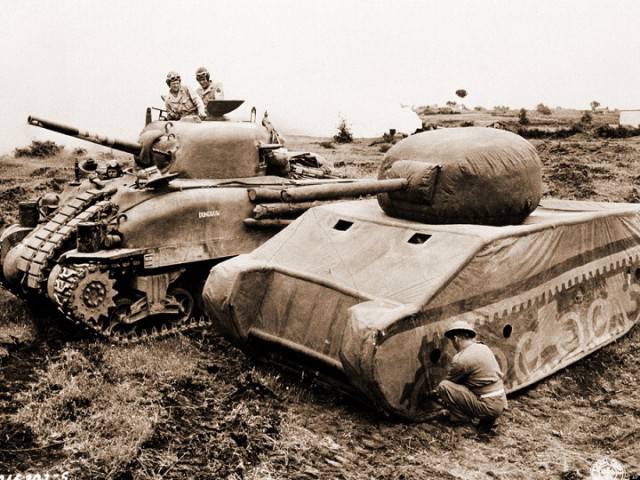 Rubber inflatable tank is, of course, very cool. But he does not shoot at the enemy!

And I must say that such an idea occurred to people immediately after the First World War. Let's look at this photo here. It tracked transporter carries tourists through the mountains. Everything is very civilized and innocent. We see the slopes of Mont d'Arbois in Megeve, in France. Everybody is happy and smiling, but in fact, tests of secret armored vehicles were filmed here! 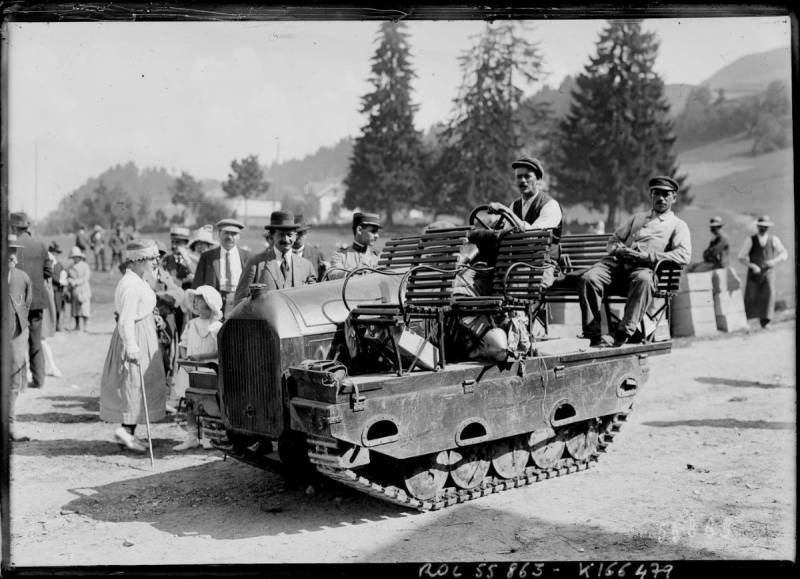 In this case, the chassis is tested. And everything else - just for the view!

In some photographs we also see General Jean Baptiste Eugène Etienne, well, yes, the very one whom his compatriots called “Père des Chars” (Pope of tanks). He then offered a lot of interesting things, and in 1919, he had already released a monograph “Studying the mission of tanks in the field,” where he summarized the experience of using them on the battlefield, that is, he did not lose time and worked very intensively. Among the many ideas he put forward were ideas for masking tanks, and he checked one of them in the Alps, disguising tank chassis as alpine transporters for recreational walks to hide this development from a potential adversary. 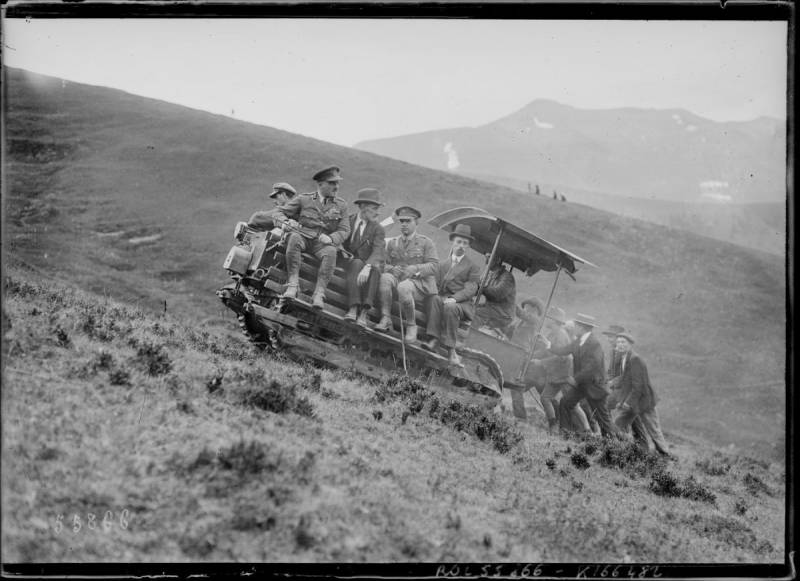 The slope overcome by this chassis is very decent, isn't it ?! 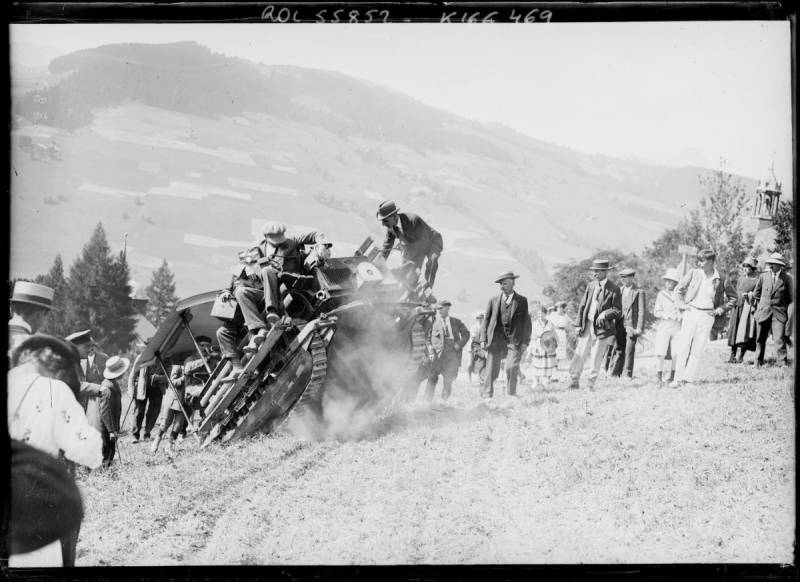 And here we already see the real test.

Now the question is: imagine that there is a desert around you. There is a road through it, and along your front there are your trucks with fuel, ammunition and ... tanks. And then an enemy reconnaissance plane appears above you. What consequences await you after this, because there is nowhere to hide in the desert? It’s clear that you can call Aviation cover. But sooner or later she will fly away, and then what? 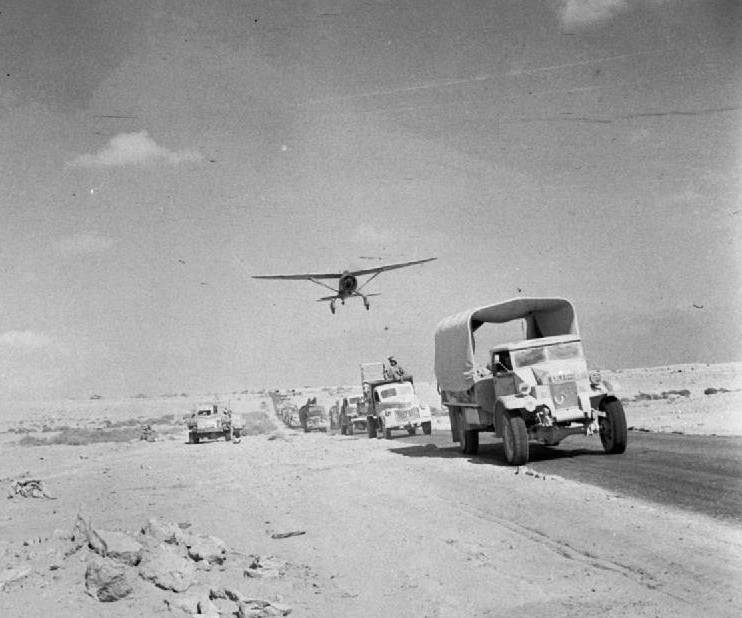 British trucks go through the Libyan Desert under the cover of Lysander aircraft. 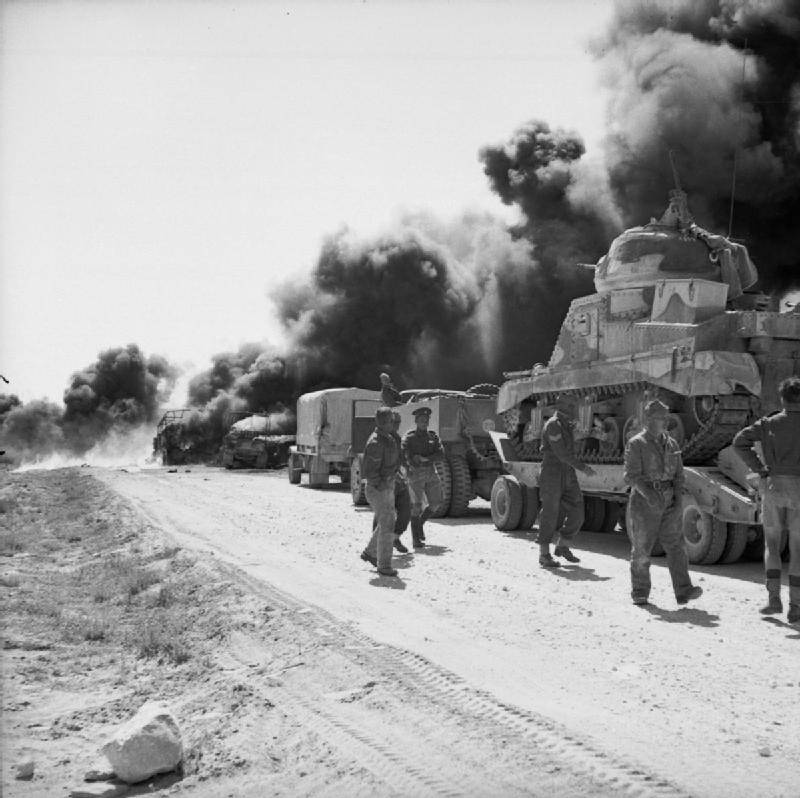 Well, if the measures are not taken or if they are insufficient, the consequences will be the same as in this photo.
British tanks in Tunisia on the road after a raid of German aircraft, 1943 year.

Well, what if the tanks advance through the desert to the battlefield? After all, they will be even less visible, as if in the palm of your hand, and from above you can bomb and fire. Eh, they would disguise them as something not so important, such that a bomb can be regretted so that later it can be dropped on tanks, because bombs ... they also cost money, and their reserves are far from unlimited! 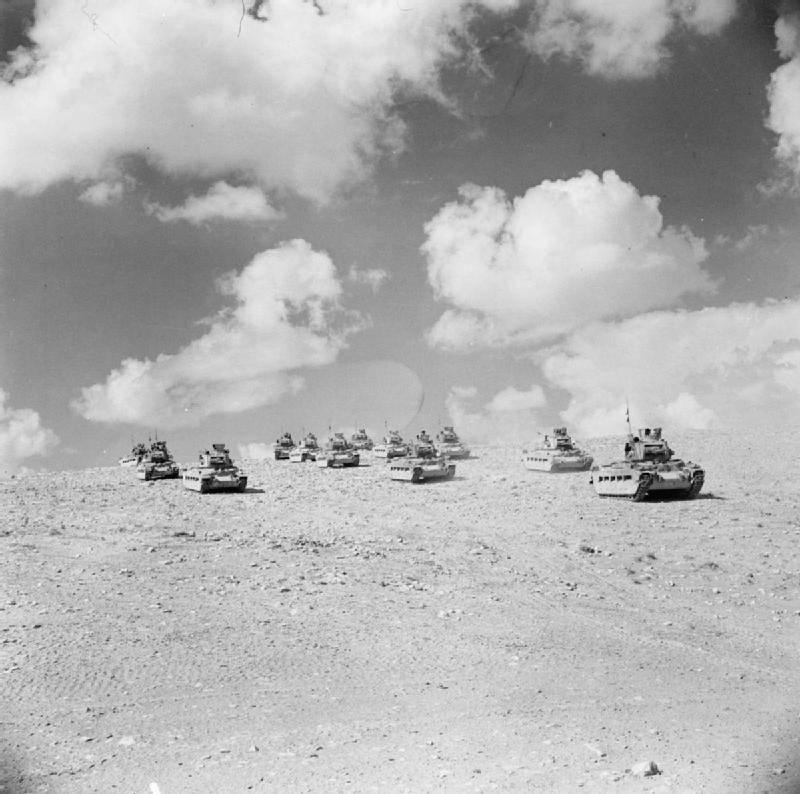 English tanks "Matilda" in the area of ​​the fortress of Tobruk, 1941 year.

Well, if you think, yes to be smart, then ... you can hide anything. For example, to do what the British did in India - to mask the Lanchester Mk. II under ... elephants! The elephants, they say, are walking, and there is nothing to look out for! And rightly so, when elephants go everywhere, then the eye does not distinguish any small things in their movement. There are elephants and there are elephants. Such is the peculiarity of human perception. True, such "elephants" should move slowly. But ... after all, it is only with the appearance of enemy air reconnaissance, and as soon as they fly away, the speed of the "elephants" can be increased! 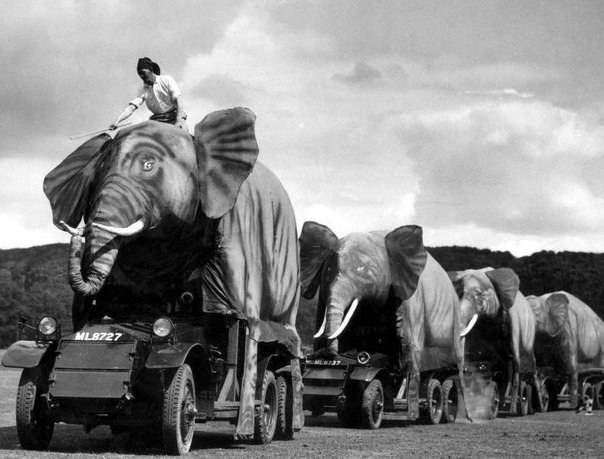 You can do differently. Grab the enemy tanks and move them to the enemy! It is clear that they must bear the identification marks of their own armed forces. But ... these signs are relatively small, and people usually look at the object as a whole, and not at its individual details. 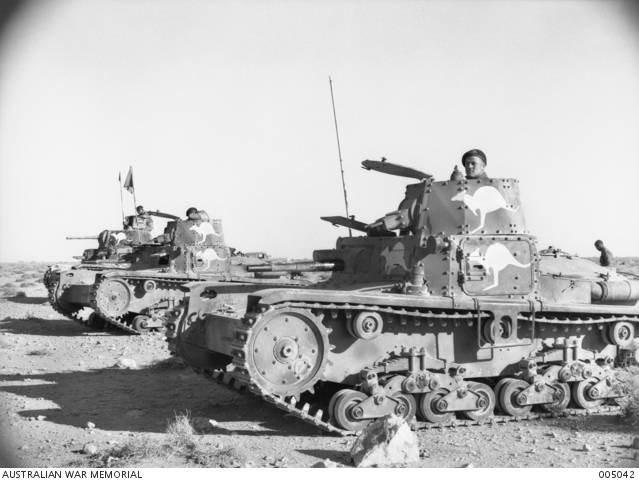 Italian tanks M13 / 37 with the identification marks of the Australians. 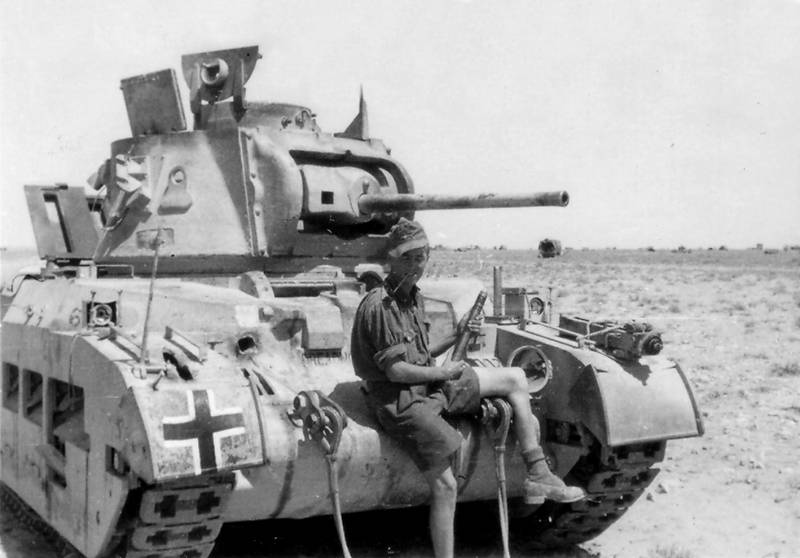 Yes, but look at the next photo. It has an American long-wheelbase 18-ton car tank carrier “Mack EX-BX” (6x4) with a gasoline 131-strong engine and wheels with 22-inch tires, in the back of which it carries another, lighter truck. Decent speed makes it not so easy target, so that such a machine to slip to the front line is much easier than, in fact, a tank or with a tank on the platform. But take a closer look at what he is carrying. On its platform is a “snag tank” disguised as a truck! 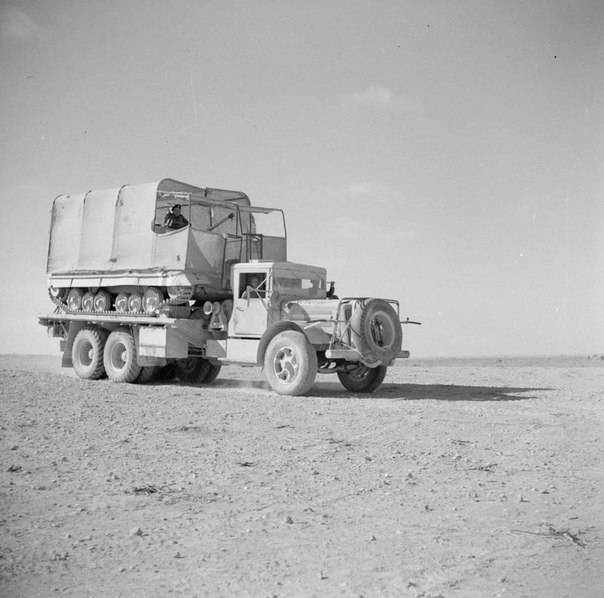 Camouflaged tank "Valentine" on the platform of the tractor.

Well, and the top of the success of the British camouflage was the operation "Bertram" in September-October 1942 of the year. Then the German command was completely disoriented in relation to the true direction of the planned attack by the British, which ended in defeat for them at El Alamein. And all because the mass of tanks "Matilda" were converted into cars and quite unexpectedly for the Germans turned out to be where they did not expect them at all! 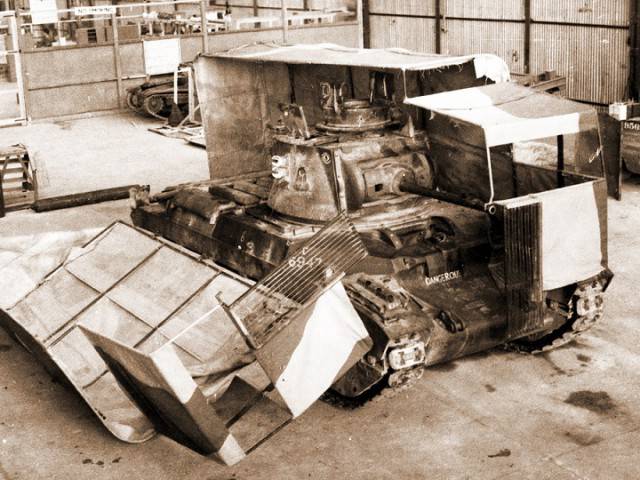 This photo clearly shows the device camouflage "shell" of the tank "Matilda. It consisted of two halves, very light and cheap, which could be removed from it very quickly! 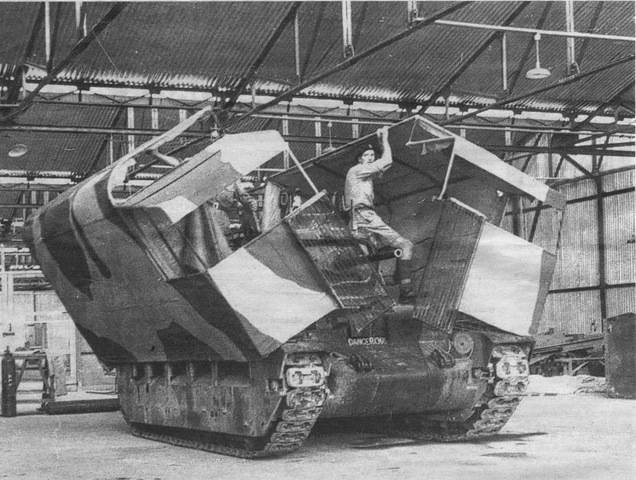 Watching the expensive Matilda driver could lead through the grille radiator!

With the "Matilda" and A9 it was easy: the driver in them was located in the center, so you could arrange for him to observe through the lattice fan. On Churchill, his place was somewhat on the side, and it was not so convenient, but the benefits of such a disguise outweighed everything, and the British turned into a “covered van” even these heavy tanks. They simply made the entire front part of the layout, and this was quite enough. But a tricky eye catch was invented: dark marks from the wipers on the glasses. They could be seen from afar, and this increased the reliability of the object of disguise.

But the most interesting of all was the English who arrived with wheeled-mounted ACS “Deacon” (“Deacon”), into which they converted the all-wheel drive AES “Matador” trucks. The front of the car had an armored hood and cabin, and on the platform on the back was an open rear tower with an 57-mm gun. Ammunition of 58 shells was located here in two armored boxes. With such an arrangement, the gun did not have a round-up attack - there was an unrepairable sector where the cabin was located. But in spite of this, she could shoot ahead, and the British decided to take advantage of this circumstance, turning this ACS into another "truck". Moreover, the alteration was very reliable, because the car was wheeled, so that no, even a very attentive observer could not have suspected that in front of him a tank! 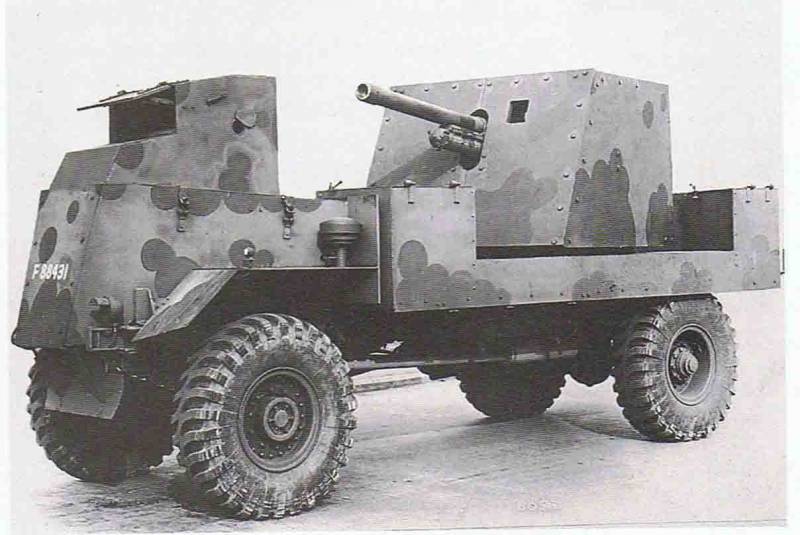 And this was done not to overtake these ACS to the front line. Just the opposite! They were supposed to be used in such camouflage directly in battle! The fact is that in desert conditions the exact front line was absent. Of course, there were minefields, and solid lines of trenches and barbed wire, but you could always get around this if you wanted to. And in order for the enemy to fail, all participants in the war in the desert conducted continuous reconnaissance, both in the air and on the ground. The Italian armored cars were specially adapted for operations in the desert and conducted reconnaissance and patrolling at a considerable distance from their troops, and on occasion attacked British transport vehicles and rear units. It was against them that the Deacon self-propelled guns were involved. 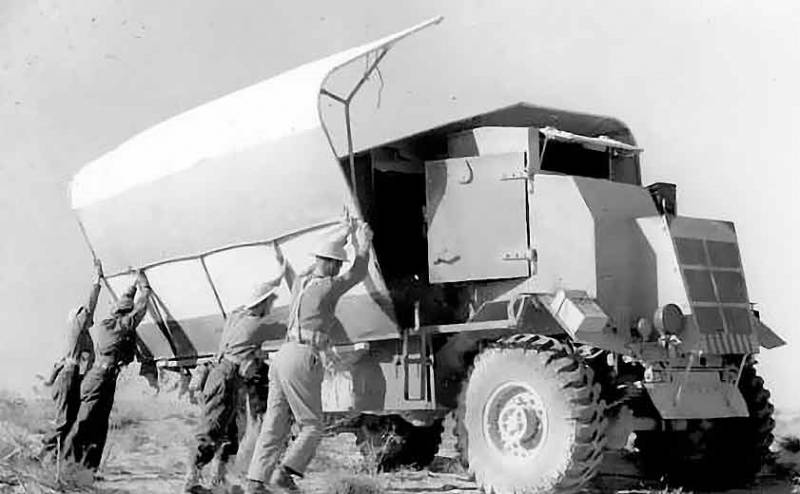 Calculation of the "Deacon" is busy converting its ACS into a truck.

The tactics of their use was very simple, but effective, like in the trap ships that sank a lot of enemy ships during both world wars. Noticing a lonely truck, the Italians in their car rushed to intercept, and tried not only to destroy it ("it always has time!"), But to seize it as a trophy. Having approached closer and having given couple of precautionary shots, they forced "truck" to stop and went to him for "living". And it was here that the disguise from him fell and from a distance of 50-100 meters his gun fired an Italian armored vehicle 57-mm armor-piercing projectile, and if necessary, even two, since its rate of fire was very high. And that's it! As a rule, the Italians' car flashed like a candle, the survivors were taken prisoner and ... very often they went on to meet the new “adventures”. There are cases when these unusual SAUs allowed enemy tanks to approach them, and then destroyed them with the very first shot. Well, and being discovered, they quickly turned around and at full speed left the enemy, firing, like a cart, from an instrument! So clever masking of tanks, corresponding to the place and time, is a great thing! 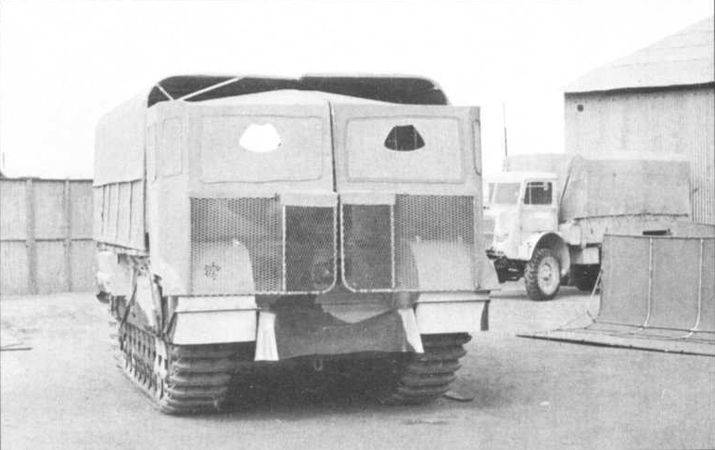 And this is “Churchill!”

Ctrl Enter
Noticed oshЫbku Highlight text and press. Ctrl + Enter
We are
PTS-4 floating conveyor is one of the best in its class.Tracked armored personnel carrier K-75
Military Reviewin Yandex News
Military Reviewin Google News
30 comments
Information
Dear reader, to leave comments on the publication, you must sign in.