Yielding to the American, the Russian submarine fleet has unique ships. 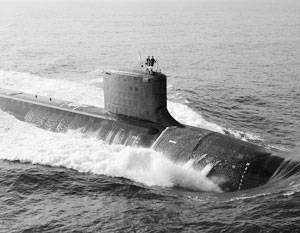 The domestic submarine fleet is really significantly inferior to the American. So our experts comment on the relevant statements of the head of the Pentagon, calling Russian and Chinese submarines the main competitors of the underwater fleet USA. However, Russia also has such submarines, an analogue of which the United States failed to create.


In his speech at the largest US-based US submarine base in the city of Groton, in Connecticut, the head of the Pentagon Ashton Carter reported that his department views the Russian submariners as rivals. "We, of course, have competitors in such countries as Russia and China, which, hopefully, will never become aggressors," TASS quoted him as saying.

At the same time, he said that although the superiority of the American naval forces and, in particular, the submarine fleet is not an American “birthright”, his country's submarine superiority over China and Russia will continue in the future.

According to the captain of the first rank, the first vice-president of the Academy of Geopolitical Problems Konstantin Sivkov, under the current state of affairs, Carter is really right. The Russian submarine fleet is inferior to the American quantitatively and qualitatively. “Should we catch up with America? If we are going to solve the problem of protecting our interests on a global scale, then it is probably worth it. And if we are going to sit at the coast of our continent and not to stick out, it is not worth it, ”said Sivkov in the commentary to the newspaper VIEW.

Indeed, according to the Central Naval Portal, on the 2014 year, Russian submariners exceeded their American counterparts only in the number of nuclear submarines with cruise missiles. There are seven of them in Russia, along with those under construction - nine, and the US Navy, according to the list structure, is four (although the number of cruise missiles on board is many times greater). In addition, the Americans in service do not have diesel submarines. In the Russian Navy their 57.

But in this case, rather, it’s worth talking not about Russian superiority, but about different strategies for the development of naval forces. Americans deliberately abandoned diesel submarines. Their construction was curtailed in the late fifties. And now the US Navy rely on nuclear boats, more expensive, but better suited for long autonomous voyages. In terms of the number of nuclear-powered submarines, the US is noticeably superior to Russia: the Americans have their 53, and our Navy has the 16 (under construction - the 19).

If we talk about qualitative comparison, it will also not be in favor of Russia. In Soviet times, the USSR was the leader in the construction of the submarine fleet in the world. So, since 1983, submarines of the 971 “Pike-B” project (in the NATO classification - Akula) were produced. In terms of secrecy, they were approaching American counterparts at that time. At the end of the Cold War, the Americans were able to create a masterpiece of submarine shipbuilding - the fourth-generation Civulf boats. But they were so expensive that the Americans had to give up their mass production.

However, since the nineties in the development of the Russian submarine fleet failure occurred. Throughout this period, our military-industrial complex could only complete the construction of the ships laid down during the Soviet era. At the same time, in the course of a decade only a few nuclear submarines were commissioned - the same number as they were built in a Soviet time. At the same time, the Americans annually commissioned several submarines of the latest modifications. As for combat duty, then, as reported by the American Federation of Scientists (Federation of American scientists, FAS), in 2008, on account of American submarine carriers, there were three times more trips than the Russians. Although, according to the statement of the former Navy Commander Viktor Chirkov, from January 2014 to March 2015, the intensity of Russian submarines entering combat service increased dramatically (by 50% compared to 2013), to say that on this indicator the submariners approached the Soviet level is still not necessary.

All this, of course, does not deprive the Russian submarine fleet of the second in the world. Today, Russian submarine shipbuilding, unlike so many other industrial sectors of the Soviet era, is still at the global level. “The Chinese do not have any submarines capable of competing with the US. We have about a dozen of them, ”said Sivkov.

According to Defense news, China, named by Carter along with Russia as the main competitor of the US submarine fleet, has three nuclear submarines, six strike nuclear submarines and 53 diesel-electric submarines. This is more than any other of the neighbors of the country. However, the Chinese submarine fleet, apparently, will remain the third largest in number and combat capabilities in the world, if, of course, China does not make a qualitative leap in the field of rearmament. This possibility is not excluded, given the close attention that China has been paying lately to the development of its armed forces, and especially the navy.

In addition, recently the territorial disputes of the PRC and its neighbors have sharpened precisely where the use of naval forces is indispensable. It is primarily about the division of the South China Sea. Several neighboring states apply for small uninhabited islands here. Particularly acute is the dispute between China and Vietnam over the Spratly and Paracel Islands.

Meanwhile, the American press calls not to dismiss the possibilities of the Russian submarine fleet in its current state. For example, as noted by the New York Times, "at the moment, Russian submarines and reconnaissance ships operate in close proximity to the extremely important submarine cables that provide Internet connection almost throughout the world."

US intelligence fears that in the event of a conflict with Russia, it could attack these cables, which could negate many of the technological advantages of the United States. American analysts also complain that the Pentagon and NATO have recently paid little attention to anti-submarine operations, which to a large extent enabled Russia to increase its submarine power.

According to open sources, Russia does have at least a few nuclear submarines with exceptional characteristics (primarily in terms of the depth of the dive), which even the United States does not have. There have been reports of the presence of a top-level nuclear submarine in the Main Directorate of Deep-Sea Research of the Russian Navy, capable of operating at a depth of six kilometers for several weeks. This is a unique achievement, and neither the United States nor China has such devices.

Chairman of the All-Russian Movement of Fleet Support, Mikhail Nenashev, in an interview with the VIEW newspaper, expressed the opinion that talks about the complete superiority of the American military fleet over the Russian one are completely untenable.

"Let the Americans show at least one area of ​​the oceans, where we could not resist them or give change," he said. Nenashev recalled the recent launch of the Caliber system missiles from a diesel submarine on ISIS positions in Syria, which demonstrated that such developments are being made in Russia that, as the expert put it, “nullify the entire verbal husk” of the total superiority of the United States and NATO. True, it is worth noting that in the West “Caliber” is often called an analogue of American “Tomahawks”, which have been launched from American and British submarines for several decades.

“In addition, the professionalism of Russian submariners, which has increased over the five to seven years that active training has taken place in the seas and oceans, allows even the number of submarines that we have to solve operational-tactical and strategic tasks. Of course, the fleet needs several dozen new submarines. But even now we do not advise Americans to check its combat readiness in reality, ”said Nenashev.