Barguzin is not the last argument

27 May 2016
65
Recreation of a railway-based strategic missile system is a necessary task for today. At a minimum, this is a response to the development of the so-called American missile defense system, complete with the concept of a fast global strike, whose task is to nullify our nuclear potential and make it ineffective. And we need to look for means and ways to break through this missile defense - only then there will be confidence that a quick global strike will not take place.


The railway complex has a number of advantages, which forced us to return to the idea of ​​its use. The main thing is maneuverability. Track the location of the complex to the enemy will be very difficult. However BZHRK "Barguzin" will probably equip a less heavy rocket than the previous one - "Well done", developed by the Dnepropetrovsk Yuzhnoye Design Bureau and produced in Pavlograd. Most likely it will be a product based on Yars.

There are BZHRK and disadvantages, which also should not be ignored. First of all - the problem of safe operation of such a complex. Yet this is not a stationary launch pad, but a railway platform. The rocket has toxic components of fuel, at least in the system of breeding warheads. And in general, to travel around a country with a nuclear warhead - there are serious additional risks. Plus, experience shows: there is a very large load on the railway, both in the literal sense - because of the huge mass of the train, and in the figurative - the schedules and schedules break. 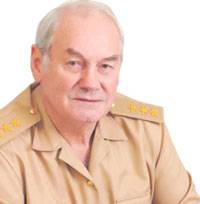 It is not necessary to consider the re-creation of BZHRK as an exhaustive response to the American approach. weapons mass destruction to our borders. For nuclear deterrence to be effective, we need to create a grouping of high-precision weapons such as cruise missiles. We have it, but it is necessary to increase the quantity and work on new, more efficient samples. And most importantly - to base this weapon as close as possible to the territory of the United States. We can blame Romania and Poland for the deployment of missile defense systems on our territory, but we need to understand: the main player is the United States. And they consciously endure these funds on the territory of other countries, primarily in Europe, in order for us to clash with our neighbors and, in the event of an armed conflict, beat them. And the territory of America will remain intact. And with the understanding that these are not Turkish, Polish or Romanian means of attack, they are approaching our frontiers, namely American ones, we need to pull up strike forces to the territory of the United States, including with small-sized nuclear ammunition. That is what will be the most effective deterrent.

We cannot create land bases in neighboring countries with the United States, so the main burden will fall on the fleet - surface and underwater. We will have to have logistics points to call our ships there during combat patrols, but no more. This is also the answer to those who say that Russia does not need a powerful ocean fleet.

And when the Americans feel that their territory, their infrastructure under the gun, they will begin to negotiate. Recall 1962 year: on the one hand, there was a rather tough confrontation, but on the other - it was after the Caribbean crisis that the Americans agreed to an agreement, including on the missile defense system, and on strategic missiles. When they projected Hiroshima and Nagasaki to themselves, they immediately began to negotiate. Now something similar is needed, although it is advisable not to bring the case to a crisis.

Ctrl Enter
Noticed oshЫbku Highlight text and press. Ctrl + Enter
We are
"Barguzin" instead of "Well done" as a response to the missile defense systemRocket invisible
Military Reviewin Yandex News
Military Reviewin Google News
65 comments
Information
Dear reader, to leave comments on the publication, you must sign in.