Has Russia made a breakthrough in the creation of high-speed helicopters?

21 May 2016
92
In June, the prototype of the Russian high-speed helicopter, known by the abbreviation PSV, as promised, will take off for the first time and accelerate to the speed of 450 km / h. Does this mean that we are on the verge of a breakthrough in the practical creation of really high-speed helicopters?
On Thursday, 19 May, the HeliRussia 2016 international helicopter exhibition opens in Moscow. At the pre-press conference, it was announced that in June our prospective helicopter would reach a record speed.


Rotary-wing cars, flying at such speeds, we really need. For the first time they were started talking about them at the HeliRussia 2009 exhibition. Then they solemnly announced that they were starting work on a project of a domestic high-speed helicopter, which was the main and very joyful sensation of the exhibition that took place seven years ago.

It is worth recalling that in the US and Western Europe today are actively experiencing high-speed rotary-wing machines. Not everything works out for them, but their helicopters fly, stably show speeds around 400 km / h, are demonstrated at many air shows. And we should never have been left behind.

On HeliRussia 2009 showed a number of options for the possible layout of promising high-speed machines. As a working concept, we chose the project of the Ka-92 helicopter. According to the stated characteristics, the car had to carry 30 passengers for one and a half thousand kilometers at a speed of 450 km / h, take off and land on any unequipped but level platform. Such a rotorcraft, if implemented, could have revolutionized the transportation of hard-to-reach territories in Russia.

It was assumed that the main customers of the high-speed helicopter and the financiers of its creation will be oil and gas companies, rapidly moving to the North and even to the Arctic. You can’t think of a better machine for providing shift shifts and eliminating possible emergencies where no aircraft will land, and you can’t think of a regular helicopter.

According to the then head of the helicopter industry, Andrei Shibitov, the project should have taken no more than eight years to complete. According to the developers, with proper funding, the Ka-92 could be lifted into the air and even prepared for mass production in five years, that is, in 2014-2015.

Recall from the day of the layout of the perspective high-speed helicopter passed seven years. Where is the car? 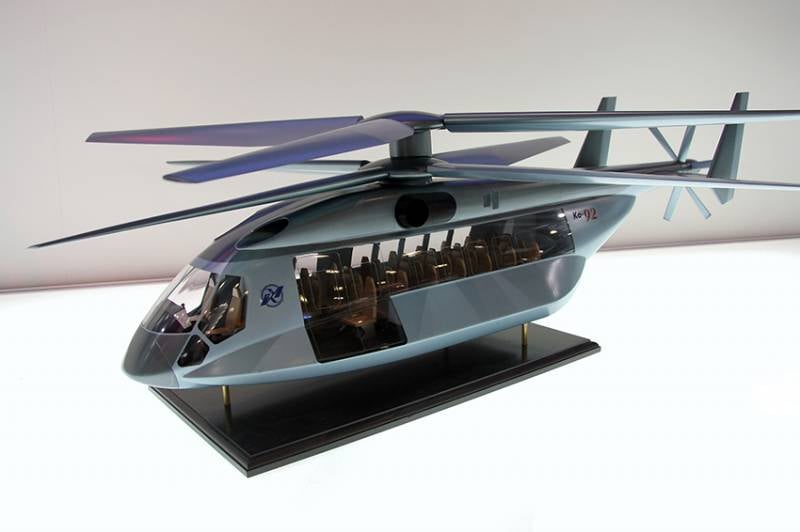 Model Ka-92. Photo: Vitaly V. Kuzmin / wikipedia.org
In the metal she never appeared. But without unnecessary advertising noise, they built a flying laboratory called PSV, a promising high-speed helicopter. From the budget for PSV spent a lot of money. For the first time this miracle of technology was shown at last year's MAKS-2015 air show. It is PSV that should reach record speed in 450 km / h in June. According to the scheme - this is a classic helicopter with the main and compensating screws.

As it turns out now, managers and financiers ultimately identified the look. There was one criterion. High-speed car should not be much more expensive than the classic. And her form should be classic. What the helicopter builders believe is basically impossible.

First of all. If we talk about the cost, then the jets initially were several times more expensive than the piston, but today the whole world flies mainly on expensive jet engines, and not antediluvian pistons. And the high-speed helicopter will not be able to compete in price with the now familiar machines, it will definitely be much more expensive.

Secondly. For some reason, efficient managers ignored the opinion of aerodynamics - a high-speed helicopter cannot be built according to the classical scheme with supporting and compensating screws, like PSV. The moment will inevitably come when the rotary-wing collapse cannot be compensated by any tail rotor. His speed will be obviously limited.

High-speed performance provides only coaxial circuit. In this case, the rotor screws should no longer be long and flexible, but short, rigid and rapidly rotating. These screws provide sufficient lifting force. But to give the necessary speed you need a pushing screw or even a jet engine. In this case, the speed in 450, 500 km / h and even higher will become usual, economical and safe. According to this scheme, and was supposed to build Ka-92.

The termination of financing of the project announced many years ago was habitually explained by a crisis, a reduction in the revenues of the oil and gas complex, and a decrease in its ambitions. But we must think about tomorrow and about state interests in all their complex.

We have almost collapsed regional flights. Many airfields in the Russian hinterland are a terrible sight. Hundreds of billions, if not trillions of rubles are probably needed for their restoration. Where to get them? But high-speed helicopters do not need any concrete runways. Need only a flat platform. And if we take into account the costs of restoring the regional aerodrome infrastructure throughout the country, compared to the costs of the speedy creation of a high-speed helicopter - even effective managers must understand what is more profitable for the country from any point of view.

Alas, now the question is almost always solved not from the point of view of the general state benefit, but taking into account the interests of individual holdings or corporations.

Meanwhile, in addition to the civilian aspect of high-speed helicopters, there is also a very important military component. At previous HeliRussia salons, concepts of percussion combat vehicles took off openly, taking off in helicopters, then folding their blades and turning into jet attack aircraft, developing speeds up to 900 km / h. Moreover, these machines are already in the project adapted to work in the Arctic. Fantasy! But it could be implemented.

Time to create a domestic high-speed helicopters missed, but still not lost. And what path the Russian helicopter industry will take - we will see soon.

If the mysterious while PSV really takes off in June and accelerates to 450 km / h, it will be nice. The billions spent on it can be justified. In addition, it is argued that the helicopter propeller, created from new structural materials and a new configuration, can be tested at the flying laboratory. And that's good too.

That's just for the really promising high-speed helicopters, neither PSV nor its flexible screws, even the newest generation, will have anything to do with - just by the laws of aerodynamics. So the question of creating a domestic high-speed rotary-winged helicopters remains open. 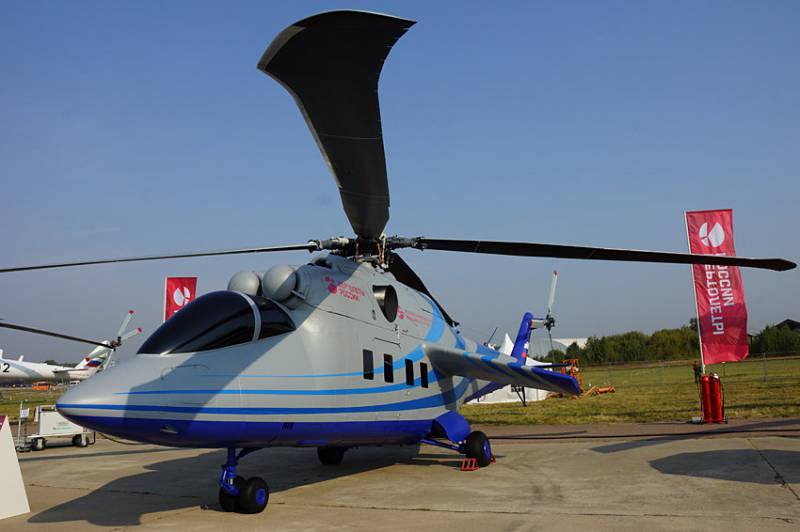