24 May 2016
25
Since the beginning of World War II, the US industry, which has mastered the technology of mass conveyor production, very quickly shifted from consumer goods to weapon and military equipment. On conveyors collected Tanks, guns, planes and even ships. In the second half of the war, the Americans produced more weapons per day than the Allies lost in battle. A typical example of mass production of military equipment can be considered a heavy bomber B-24 "Liberator". We are most interested in the motor transport component of this process, since it clearly demonstrates the state of logistics and road transport involved in the production of aircraft in the United States during the war. 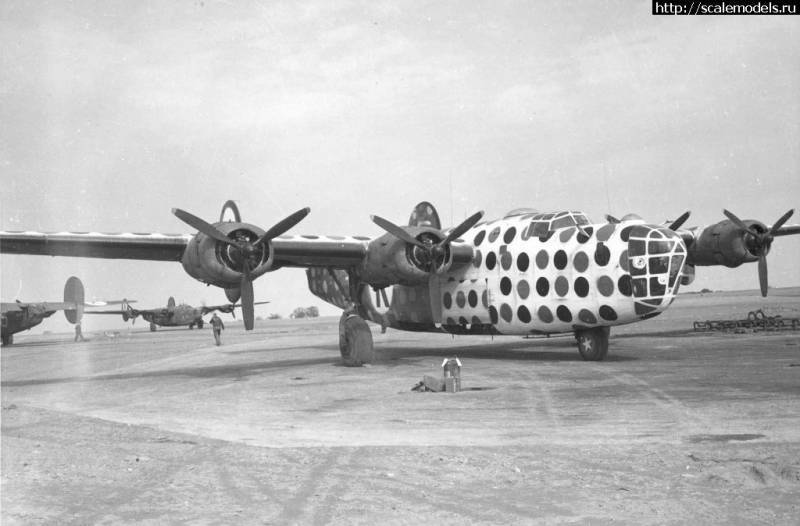 B-24 in the leader coloring book.

The B-24 became the most massive four-engined combat aircraft of the war — the Liberators 18 313 was released over five and a half years, more than two times more than the more well-known B-17 Flying Fortresses. History production of the B-24 is closely connected with the automobile concern "Ford". In 1940, two group leaders - Edzel Ford and Charles Sorensen - visited the plant. aviation Consolidated Vultee in San Diego. The purpose of this visit by motorists to aircraft manufacturers is to organize the mass production of B-24 aircraft developed in San Diego at the new Ford plant in Willow Run, Michigan. E. Ford agreed to start producing aircraft, but with one condition - for the period of production at Ford, the aircraft will not be modernized. 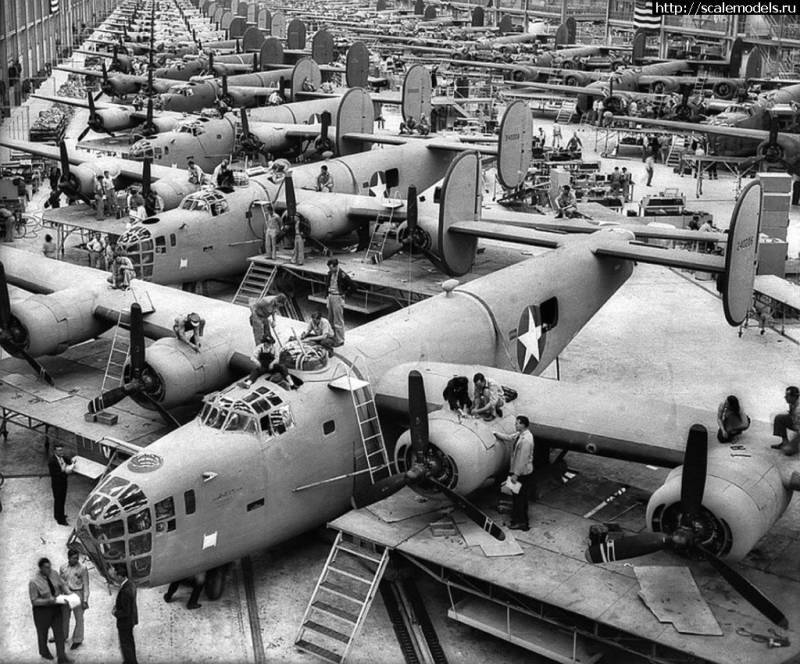 The customer - the Air Force - agreed with this unexpected demand, as the capacities of the three aircraft factories of the firms “Consolidated Vultee”, “North American Aviation” and “Douglas”, which were supposed to produce a new bomber, were not enough to produce the aircraft. E. Ford demanded not to change the design not because of a whim, but because he intended to produce a bomber on a conveyor belt, like a car, and he knew very well that the slightest change in design immediately stopped the conveyor.

In 1942, when production of the B-24 in Willow Run was in full swing, one complete Liberator and two sets — the fuselage, tail, and wings — for two more bombers were assembled on the conveyor each hour. But even in this huge plant there was no room for two additional assembly lines. Could not find free areas in the vicinity. Such areas and labor were available in Oklahoma, in the city of Tulsa, and also in Texas, in the city of Fort Worth. But from Willow Run to Tulsa was 1450 km. However, this did not scare Ford specialists. They knew the answer to the question - how to deliver large-sized elements of a bomber to the assembly site. Yes, just immerse them on the train. The price of transportation did not play a role - the state paid for everything. It was also known who would do this - in the late twenties, Ford had signed a long-term contract with entrepreneur Lloyd Lawson for the delivery of new Ford cars to vendors in all states. In the thirties, he was joined by Robert Ellenstein, the way the transport company “E and L Transport” emerged - by the beginning of the war, Ford’s most important partner in the field of transport services. It was she who received the order to organize the delivery of parts of the aircraft to the final assembly. Transport workers were given only one condition - the delivery of elements to the factories should be carried out at the pace of assembly of aircraft, i.e. every hour so that the delivered parts without intermediate storage “from the wheels” are sent to assembly conveyors ... 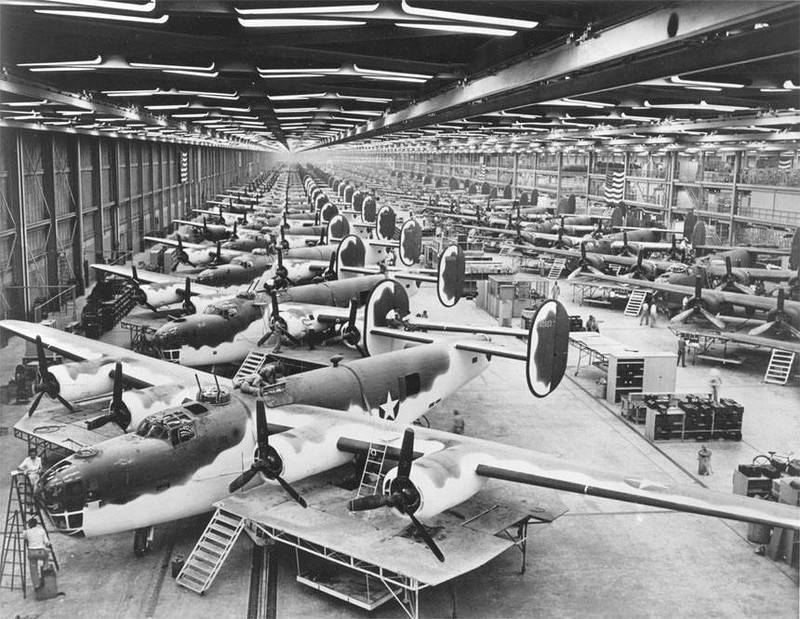 B-24 on a conveyor in camouflage.

But we needed special semi-trailers. They were developed and manufactured by the firm “Mechanical Handling Systems”. The semi-trailer was 18,3 m long, 2,3 m wide and 3,0 m high. The roof was not, as the elements of the aircraft loaded crane on top. After loading the semi-trailer was closed with a canvas awning. For transportation of a set of elements of one bomber, two semi-trailers were needed - the first one loaded parts of the fuselage and tail of the aircraft, the second - the center section, wings, bomb bay and engine hoods. Engines, chassis and internal equipment were made by other companies, and they were engaged in delivery to the assembly plant on the same principles. However, there were problems with the tractors for such large-sized road trains. The most important condition was high power and exceptional reliability, but even the highly developed US auto industry at that time could not provide E and L Transport with such machines capable of delivering aircraft parts to the assembly at one specific time at one exact time. Therefore, immediately abandoned all serial truck tractors, as unreliable and not enough speed. L. Lawson, as an experienced transport worker, decided to order a tractor from the specialized firm “Thorco”, which had considerable experience in re-equipment of Ford production trucks into three-axle heavy vehicles. The design of the chassis of the tractor was almost traditional for three-axle - with a balanced rear suspension truck on inverted semi-elliptical springs and continuous beam front axle also on two semi-elliptical springs. Both leading bridges were designed specifically for the future car. Well, the power unit assembled on the subframe being pushed forward became the real “highlight” - side by side mounted two V8 engines in 100 hp from the passenger car “Mercury” along with their gearboxes. And they switched gears with a whole system of workloads that worked from a single control lever; respectively, also altered the clutch drive system. Each engine set in motion "its" driving axle. Two engines were supplied not so much for providing high power, but for reliability - so that in the event of a single failure, the auto train “reached” the workshop. 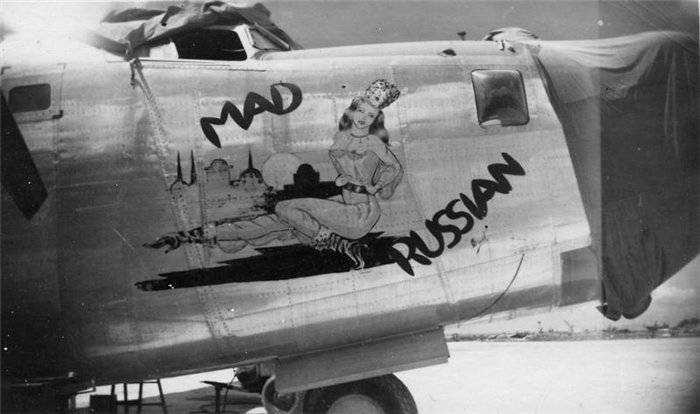 But it was necessary to push the motors out from under the cab because it was not folding. By the way, a rather wide at that time cabin was assembled from parts of the serial cabs of Ford 1940 trucks and vans, and it turned out to be more beautiful and comfortable than the cabs then produced, located above the engine. The total length of the tractor with a semi-trailer was 23,5 m. 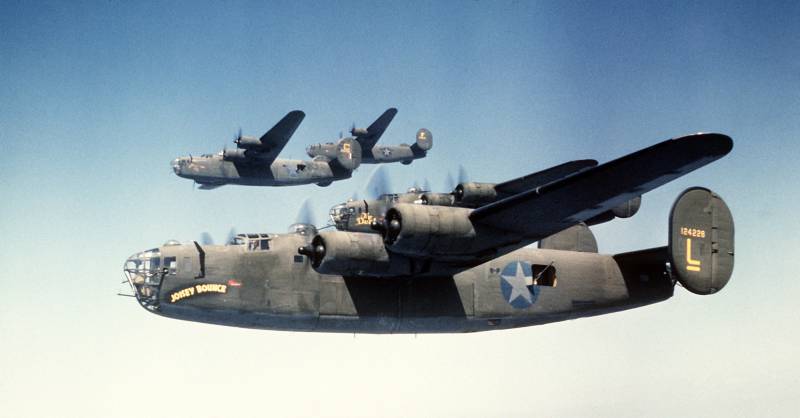 The routes of movement of the road trains to the assembly plants were chosen so that along the way there was enough “Ford” workshops. According to martial law, their owners were obliged to operate 24 hours a day, 7 days a week. Two road train drivers replaced each other every 5 hours. During the trip, provided four stops for one hour for inspection and food. At the factory, the semi-trailer with the elements of the bomber was unhooked, they immediately drove empty, and the drivers went back. And so every day for three and a half years ... "Bombers" were not the only cargo of the described road trains. They serviced Ford’s WACO transport glider plant in Iron Mountain. A little later, Ford’s experience was taken over by North American Aviation, an aircraft manufacturing company, in organizing the mass production of the best American fighter of the Second World War - the P-51 “Mustang”. 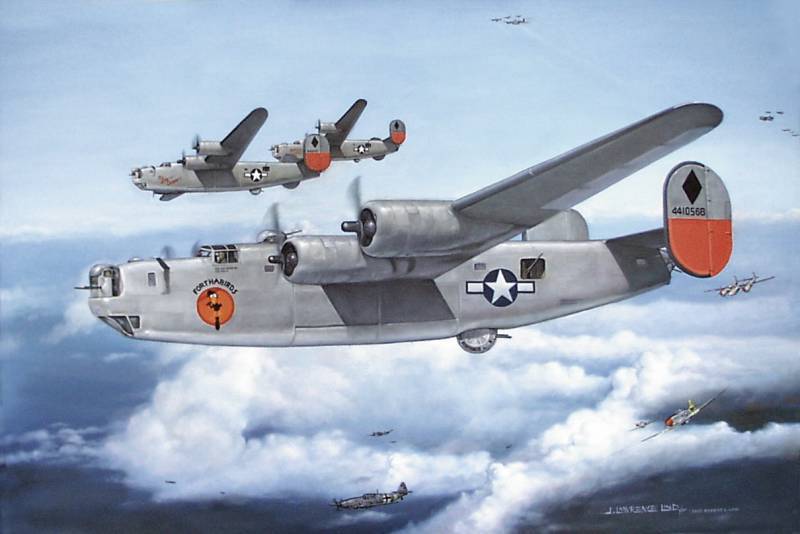 "Messerschmit" shot down by us, and the car flies, on an honest word and on one wing ... "

After the end of the war, unique road trains carried the B-32 bomber elements for some time until they were replaced with more modern ones. They served in small private companies and gradually went to landfill. In the nineties of the last century, one, probably the last of the remaining tractors found on a landfill and fully restored. Unfortunately, we have not yet found one of several hundred semi-trailers, so you can only see the road train “aircraft” in old photos ...
What is the conclusion? The principle of “just in time” (“just in time”) was not invented by the Japanese at all, but much earlier — in America as early as the Second World War. It was precisely the organizational skills of the “Yankees” that, during the war years, helped, thanks to automobiles, they united factories that were distant from each other into one giant assembly line and forced them to work in one rhythm, in one technological chain.