Do not go to "Astrologer"


March 27 in the program “I Serve Russia”, one of the subjects of which was devoted to our military grouping at the Hmeimim airbase, the 9P78-1 launcher of the operational-tactical complex Iskander-M hit the shot. But the first information about the deployment in Syria OTRK 9K720 appeared at the end of last year.

Recently, “Iskander” in the eyes of ordinary people has found the aura of the “long arm of the Kremlin”, capable of destroying NATO troops in Europe in a matter of minutes and in one gulp to pull down the entire missile defense system created by the United States in the Czech Republic and Poland.

The Russian military department is actively re-equipping the missile brigades of the Ground Forces with the latest 9K720 complexes. Do not stand still and the developer OTRK - Kolomna engineering design bureau, part of the holding "High-precision complexes". In just two or three years, the Iskander’s ammunition included not only new types of airballistic missiles, but also the winged P-500 developed by the Novator Design Bureau.

Let's try to figure out what tasks the latest missile systems in Syria are capable of solving and what new items are being tested in real combat conditions.

From the very beginning of the Civil War, forces loyal to Assad actively used operational-tactical missile systems against militants, which have become a fairly cheap, but very effective substitute for combat aviation. At the beginning of the conflict, according to the Stockholm Institute for the Study of Peace (SIPRI), the Syrian Arab Army had several dozen OTRK 9K720 Elbrus (Scud - according to NATO classification), in the arsenal of which, according to the Military Balance directory for 2010 (p. 272), even R-17VTO missiles with an optical photo-etched homing head were included. In addition to the obsolete “Scuds”, the SAA could boast 18 more more modern shopping malls, “Tochka”, delivered by the Soviet Union in the mid-80s.

The peak of the use of PTRK by the government forces was in the 2013 – 2014 years. During this time, the CAA shot virtually the entire missile stockpile and lost part of the launchers, which were replaced by Fateh family complexes supplied by Iran as military aid.

At first glance, the use of operational-tactical missile systems in conditions of a civil war looks somewhat excessive. "Points" and "Elbrus" compensate for the relatively low accuracy of the power of the combat units installed on them, especially when it comes to so-called cluster warheads. OTRK depending on the type can hit targets at a distance of up to 300 kilometers and do not depend on weather conditions, which is especially important in Syria during the spring and autumn periods with sandstorms and strong winds that prevent the use of combat aircraft. It takes less time to prepare and launch a rocket than to fly, thereby achieving high operational efficiency.

In fact, OTRK allowed the CAA in 2013 – 2014 not only to stop the attack of the militants, but also to keep in their hands a large number of settlements, even those who were surrounded. It is noteworthy that since the beginning of this year, the Syrian government forces have again actively used the Tochka Broadcasting Company, including the more modern Tochka-U 9М79-1 missiles.

In fact, the only evidence of the presence in Syria of Russian operational tactical complexes 9K720 Iskander-M is the above-mentioned footage from the TV program Zvezda, which shows a machine resembling MZKT-7903 Astrologer, produced at the Minsk wheel tractor plant. 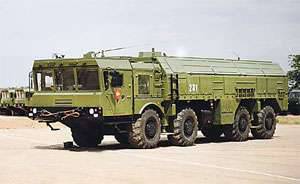 Currently, as a base chassis for launchers, "Astrologers" are used in two missile systems. In addition to the "Iskander" - in the K-300 "Bastion".

It should be noted that at least two sets (according to other data - batteries) of the "Bastion" in export version, the CAA received from Russia in several batches under the 2007 contract of the year. According to reports, all products ordered by Syria were delivered at the start of 2011, shortly before a civil war broke out in the country.

In the transport position, the launchers of both complexes are similar, but the Iskander can be distinguished by the APK-40T (TM) power supply unit installed in the front of the missile compartment behind the chassis, which is used as an autonomous energy source.

The compartment of the launcher that has entered the frame ends immediately after the last pair of wheels, which is typical of the Iskander complex 9P78-1. Whereas the self-propelled launcher K-340P complex "Bastion" compartment is much larger in size and with a characteristic long protrusion in the rear part of the machine.

According to one of the versions, the 9P78-1 launcher itself got into the “Stars” plot, but the 9Т250 transport-charging machine, which differs from the PU by a closed tarpaulin transport compartment, where two missiles and a special crane are located, with which the reload occurs combat vehicles of the complex. The dimensions of the missile launcher of the launcher and the transport compartment of TZM are identical. Moreover, the power supply unit APK-40 was also mounted on the transport-charging vehicle.

But because of the quality of the video, it is difficult to say that it is 9P78-1 or 9Т250 in the frame. Although by and large such a dispute is unprincipled: the presence of Iskander in Syria can be considered proven.

It can be assumed that the Russian operational-tactical complexes deployed in Syria perform the same tasks as their younger brothers from the Syrian armed forces: they carry out lightning strikes on the positions and targets of the militants.

Probably, target designation of the Iskander missiles is issued by fighter-gunners from the Russian command of special operations forces, information also comes from the UAV. We can safely say that in both cases, combat work is carried out in real time.

Let's try to figure out which missiles the Iskander can use in Syria. As already mentioned, there are currently two types in the OTRK arsenal: winged and aero-ballistic in several versions. Beginning with 2014, almost all official videos from the Iskander missile brigades of the Ground Forces launch exactly P-500 (9М728).

The cruise missile developed by the Novator design bureau is capable of hitting targets at a distance of up to 500 kilometers. The tests of the 9М728 as part of the Iskander complex began in 2007, but the rocket itself, according to the available data, was put into service only in the 2013 year.

It can be assumed that the P-500 is equipped with an inertial guidance system with trajectory correction by comparing the terrain map with radio altimeter data. The rocket control, in our opinion, is based on a gyro-stabilized platform (GSP) and a digital computer. The control and guidance systems installed onboard the 9М728 ensure guaranteed destruction of even small targets: according to the “MIC”, the circular probable deviation does not exceed one meter.

As already mentioned, the Iskander installations can launch several variants of airballistic missiles of the 9М723 family. But in the conditions of the Syrian operation, where the first place is not the damage radius, but the accuracy, most likely, missiles with correlating homing heads, in particular optical ones, are used, which are guided on the target target image in the final segment of the trajectory.

The 9М723 rockets with optical correlation seeker passed tests at the Kapustin Yar test site at the end of the 2011. It was expected that the products would begin to be produced in series and enter the rocket brigades of the Ground Forces no later than next year.

In addition to the missiles with optical homing heads, the Engineering Design Bureau, in collaboration with the research and production enterprise Radar-MMS, developed the 9М723, but already with the radar seeker which received the 9B918 index.

True, reliable confirmation that the new missiles enlarged the arsenal of "Iskander" has not been received. Moreover, in 2014-m it became known that the KBM began developing a new rocket.

Note that in numerous photographs and video clips from the combat zones in Syria, the characteristic remnants of the 9М723 missiles are not yet imprinted. Although there are quite a few frames with fragments of 9М79 and 9М79-1 missiles launched by the Tochka and Tochka-U TV and Radio Company, and not only product details, but even technical inscriptions are readily considered.

It can be assumed that the Iskanders do not launch as often as the Syrian fuel dispensers. Therefore, the wreckage of the newest Russian aeroballistic missiles have not yet hit the lenses. But another version is more likely: in Syria, the “main caliber” of the “Iskander” were not airballistic missiles, but cruise P-500. It is possible that part of the wreckage included in the photo and video chronicles from the battle sites and identified as remnants of X-101, Caliber or X-555CM missiles, belongs to 9М728, launched by Iskander.

How many are there under the olives?

If we assume that the operational tactical complexes 9K720 operate only in the Khmeimim airbase area, then in this case such hot zones as Aleppo, the suburbs of Damascus, Kesab, Jisr al-Shugur, even Raqqa and Deir- ez-zor In fact, both the aeroballistic and Iskander cruise missiles cover the entire territory of Syria from the Mediterranean coast.

With the reduction of part of the Russian group, the withdrawal of part of the front bombers Su-24 and Su-34, all attack aircraft Su-25, as well as the deterioration of weather conditions characteristic of the Syrian spring, Iskanders guarantee fast-precision strikes even on small targets.

The exact number of deployed OTRK 9K720 is unknown. But judging by the fact that for the entire time of the Russian military operation, only one launcher hit the camera lens, we can assume: no more than a rocket battery is operating in Syria now. These are two or three 9P78-1 launchers, one transport-loading and one command and control vehicle. However, it is possible that the launch in the plot of “Stars” is the only one.