12 May 2016
32
Company A + A from Tula began serial production and deliveries to the self-defense aerosol device shops under the sonorous name Dobrynya, which is used with BAM-OS small-sized cans 18x51 mm. A + A LLC has been operating in the Russian arms market since 2004. At present, its activity is based on its own, fundamentally new developments in the field of tubeless weapons self-defense and pneumatic weapons, as well as cartridges for him. All products manufactured by the company are certified in Russia and are protected by patents for inventions and utility models.


Among the fairly extensive arsenal of self-defense tools that are available today on the Russian market, pyro-liquid devices are becoming increasingly popular among the population, which are intended for dosed spraying of non-lethal toxic substances in the air. By design, it is something between a conventional gas spray and a gas pistol. A tubeless weapon looks more like a pistol grip and can be equipped with special ammunition cartridges - small-sized aerosol cans, abbreviated as BAM. The principle of operation of such weapons is based on throwing fluid, hence its name, as well as the main difference from gas pistols. And the ability to make an aimed shot provides an accurate hit in the face of the attacker.

When fired, such a device throws out an irritant jet in the face of the attacker, like an ordinary gas canister, but it can be fired even in small rooms (elevator, car interior), as well as in bad rainy or windy weather without the formation of a gas cloud that could cause harm to the defender himself. Getting on the mucous membrane of the eyes, pharynx and nasal cavity irritating substance has a very strong effect, causing burning, nasal discharge, lacrimation and salivation. As a result, the attacker loses the ability to perform active actions on 10-15 minutes, while the irritant does not cause any irreversible harm to his health. Also, the purchase of such weapons does not require permission to purchase them. A small size and weight make self-defense aerosol devices very comfortable to wear, including hidden. 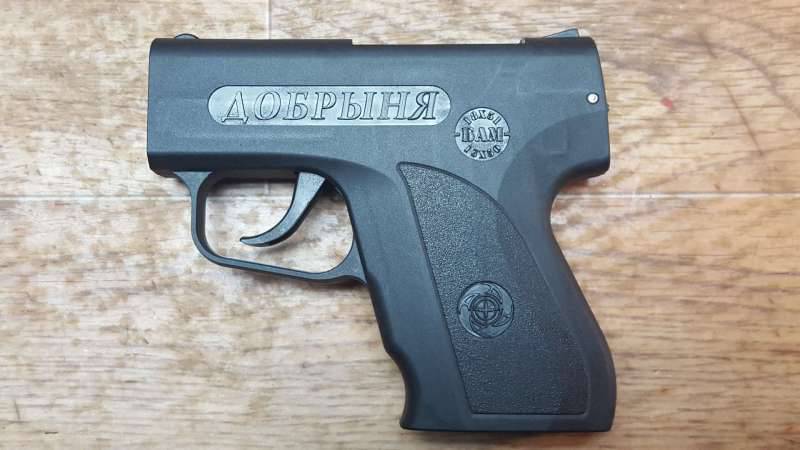 The model UDAR (Dosed Aerosol Spraying Device), which was developed on the basis of the PSG Jasmin and Violet special complexes (special liquid pistols) used since the beginning of the 1980s in the KGB of the USSR as the firstborn among such devices in the domestic market non-lethal weapons. These weapons were designed to help arrest individuals in crowded places, the firing of military weapons in which was impossible. Standard BAMs differed from special ones by a lower concentration of an irritant substance in the fluid, a somewhat larger diameter of the nozzle orifice and the absence of a powder sample. Later on, other models of aerosol devices that also use BAM appeared on the Russian market. Among them were “Bamer” from AKBS from Nizhny Novgorod, as well as “Wizard”, “Premier” and “Premier-4” from “A + A” from Tula.

In 2016, this family of self-defense weapons was supplemented with another model, which was named “Dobrynya”, most likely in honor of the famous ancient Russian epic hero Dobrynya Nikitich, who became famous for his strength and cleverness, intelligence and ability to accurately shoot from a bow. In March, 2016, the Tula company A + A, began mass production of the novelty and began to carry out wholesale deliveries of Dobryni for specialized trade enterprises.

Externally, the Dobrynya aerosol device is markedly different for the better from most of its counterparts, being distinguished by a more aesthetic appearance and design, some even manage to find in it a certain resemblance to the Vul silent pistol (6P28), which is used by various Russian special services Federation and other countries. Naturally, the design in the weapon of self-defense is of secondary importance, but a certain similarity with military weapons can bring its own advantages, for example, an additional psychological effect that will affect the person attacking you. Do not discount the commercial attractiveness of such a novelty: a spectacular appearance in the style of "military" is not the last argument that affects the buyer, prompting him to stop choosing this one and not another product of this segment. A well-thought-out concept, coupled with an attractive design and an adequate price, can make the Dobrynya self-defense aerosol device a bestseller in the Russian market. 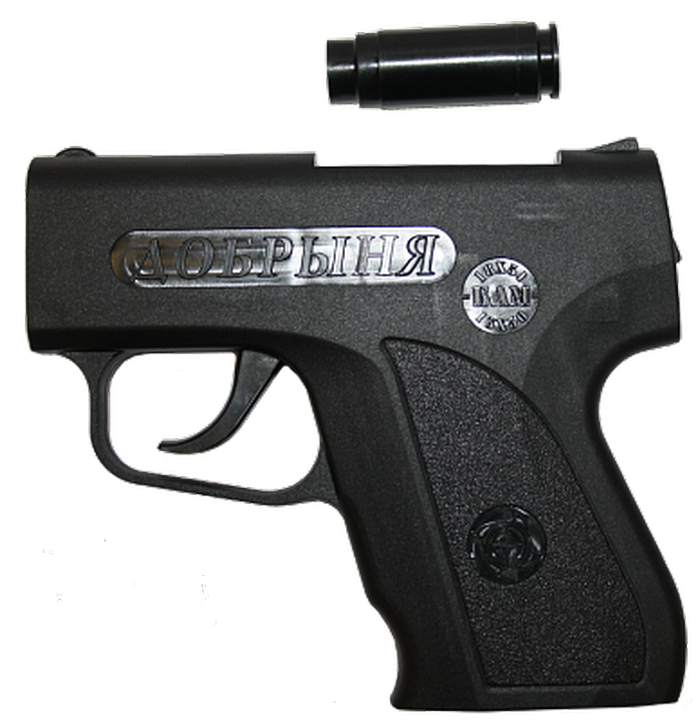 It is worth noting that the “Dobrynya” is very light (in the uncharged form of the entire 175 g) and very compact device with small dimensions. Because of this, the self-defense weapon fits easily in a pocket of clothes, in a handbag, purse, belt bag or in a case for the camera, that is ideal for permanent hidden wear. At the same time wearing the "Dobrynya" can be in the brand, specially created for him a holster. The body of the aerosol device is made of heavy-duty molded plastic, and all loaded parts of the structure are made of metal. Powerful springs, clever scheme and very good ergonomics make this weapon reliable.

This model of non-lethal weapons is charged on top with five BAMs, they are inserted into the built-in magazine located in the handle. After ejection, the sleeve is ejected automatically, while they can be removed without firing from the device, simply by pressing a special key located in the breech. The standard for the device are cartridges BAM-OS.000 18x51 mm, which are also produced in Tula at the enterprise "A + A". Each such BAM is filled with 4 cubic centimeters of a substance called oleoresin capsicum (red pepper extract). When fired at a distance of 5 meters, a similar BAM forms a spot of 300 size on 400 mm.

Using special, supplied with the device adapter, "Dobrynya" can be taught to shoot and BAM smaller caliber 13x50 mm. Of course, they will have less power, but they are a bit cheaper, in addition, they can also be used for firing weapons, because only in this caliber training BAMs are made, which are equipped with ordinary water. Bikalibernost device also allows you to use with him BAM with different irritants and noise. 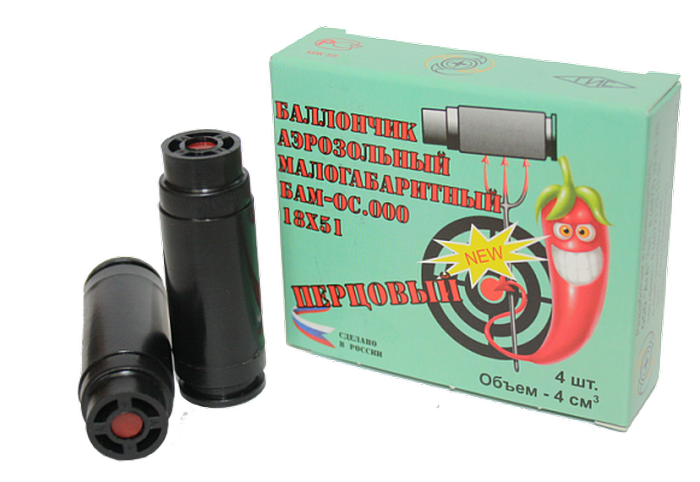 The “Dobrynya” device uses a trigger-type firing mechanism that operates in the self-dial mode. The force on the descent is approximately 70 N. When the shooter is pressed on the trigger, not only the “Zhevelo” type capsule is broken, but also the feeding up of the next BAM, as well as the automatic ejection of the spent case. There is no safety lock on the “Dobrynya”, therefore non-lethal weapons are always ready for use. The recommended retail price of an aerosol device in the Russian market is about 3 thousand rubles or about 40 euros.

Characteristics of the aerosol model "Dobrynya":