16 May 2016
9
At the initial stage of World War II, German troops used various light wheeled and semi-tracked armored vehicles for reconnaissance, the characteristics of which were sufficient for solving the assigned tasks. After the attack on the Soviet Union, the Nazis had to face a fairly powerful anti-tank defense, which did not allow light and poorly protected armored vehicles to remain safe. In addition, the advancing troops were faced with bad roads, which negatively affected the mobility of vehicles. The troops urgently needed a reconnaissance armored vehicle with good protection. The answer to this challenge were two projects, collectively known as VK 1602 Leopard.


At the end of 1941, the command ordered the development of a promising lung tankintended for reconnaissance in the rear of the enemy. The list of technical requirements for such a machine was handed over to Daimler-Benz and MAN, who had extensive experience in creating various armored vehicles. Despite the use of a common technical task, the two design bureaus ultimately created completely different projects with only limited similarities.

The project of the new light tank received the designation VK 1602 and the additional name Leopard, as a result of which this development was one of the first to receive the “cat name”. It is noteworthy that the projects of the two firms did not receive their own designations and were named the same. This may cause some confusion, since not all publications make a distinction between two different projects. In addition, for these reasons, it is possible to mix data on one tank with information about its competitor. Let's try to deal with all the misunderstandings and begin to consider the project "Leopard" with the development of the company "Daimler-Benz." 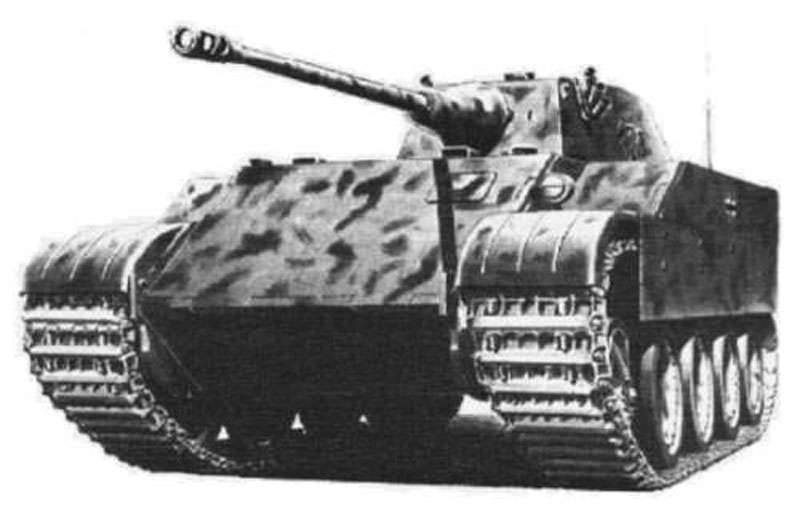 A variant of the reconstruction of the appearance of the tank Daimler-Benz VK 1602. Photo Aviarmor.net

Analysis of the experience in the development of tanks and technical requirements for the new project showed that the use of ideas and solutions traditional for that time would not allow achieving the required characteristics. Thus, it was necessary to build a new project on the basis of some non-standard ideas that are not widely used in existing developments. This approach led to the fact that VK 1602 from Daimler-Benz was significantly different from the competing development of the MAN company both in appearance and in various design features.

In order to reduce the weight of the structure and ensure an acceptable level of protection, the new tank was to receive an armored hull consisting of inclined sheets. Thus, the frontal part of the body was formed by two sheets 50 mm thick, installed at different angles to the vertical. Boards and sterns were also inclined inward and had a thickness of 30 mm. A characteristic feature of the Daimler-Benz VK 1602 project was the use of developed onboard housing niches that perform the functions of the fenced shelves. It was proposed to manufacture the roof and the bottom of the hull from 20-mm armor plates.

The authors of the new project came to the conclusion that the classical layout of the classic layout with the front transmission is traditional for German tanks. For this reason, the tank "Leopard" in the version from Daimler-Benz received a layout more characteristic of armored vehicles from other countries. In front of the hull was placed the control compartment with seats for two crew members. Behind them there was a fighting compartment with mechanisms for installing a rotating tower. The hull feed was completely relegated to the engine compartment.

In the aft compartment, it was proposed to mount a Maybach HL 12P 157-cylinder carburetor engine with 550 horsepower. With the engine mated hydraulic clutch, manual gearbox, main clutch and final drives. The transmission allowed the driver to choose one of eight forward gears or switch to a single rear gear. Due to the stern placement of all units of the power plant and transmission, engine torque was transmitted to the rear drive wheels - a rare occurrence for German tank design of the Second World War.

Initially, it was proposed to use chassis aggregates from the light tank VK 1602 in the VK 1601 project, which by then was released for testing. Nevertheless, Daimler-Benz experts came to the conclusion that the operating characteristics of the existing undercarriage with Knipkamp suspension were low, after which they began to develop all the necessary units on their own.

The undercarriage of the Daimler-Benz Leopard tank was based on five support rollers of medium diameter with an individual suspension on each side. In front of the hull were placed the guide wheels in the stern - leading. Support rollers are not provided. To ensure the required pressure on the ground, it was decided to use a steel fine-cutting caterpillar with a width of 650 mm. The length of the support surface reached 3475 mm.

A rotating turret with armament and workplaces of several tankers was to be installed on the roof of the hull. According to reports, the tower was developed, based on mastered solutions. According to other sources, the finished turret of one of the existing tanks was used. The used tower had a rectangular frontal sheet, and the sides and the stern were formed by a common curved part. The maximum reservation of the tower was 50 mm, its thinnest elements had a thickness of 20 mm. The defense of the gun mount was proposed to be carried out using a cast mask like Saukopf.

As the main weapons The new tank was proposed gun 5 cm KwK 39 L / 60 caliber 50 mm with a barrel length 60 caliber. This weapon could use armor-piercing and fragmentation shells of several types. The maximum velocity of the projectile (armor-piercing Pz.Gr.40) reached 1180 m / s. At a distance of 100, such ammunition could penetrate up to 130 mm of homogeneous armor. When using fragmentation shells it was possible to shoot at a distance of up to several kilometers.

In one installation with a gun, a twin MG 34 machine gun of 7,92 mm caliber with tape ammunition was to be mounted. Aiming a cannon and machine gun was proposed using a common telescopic sight. The use of a second machine gun was not envisaged, but the crew could have personal weapons.

The crew of the Daimler-Benz VK 1602 tank was to consist of four people: a driver, a radio operator, a gunner-commander and a loader. The driver and commander were placed in front of the case. To gain access to their seats, these tankers had to use hatches in the roof of the hull. There were also periscope instruments on the hatches. Another inspection hatch was located in the front plate, in front of the driver's seat.

The commander, who is also in charge of weapons control, and the loader were to be in the tower. The commander-gunner's place was placed on the left side, the loader was on the right. In the roof of the tower there were two hatches, with the double commander housed on the turret with a set of viewing devices. Charger had only one periscope in the manhole cover.

One of the main tasks of the tank VK 1602 was reconnaissance. To monitor the situation, the crew had to use the available viewing devices, and in order to transmit intelligence data it was proposed to equip the vehicle with a FuG 2 or FuG 5 radio station. The space for the radio station was located in the front of the hull, obviously, in the niche of the right side. 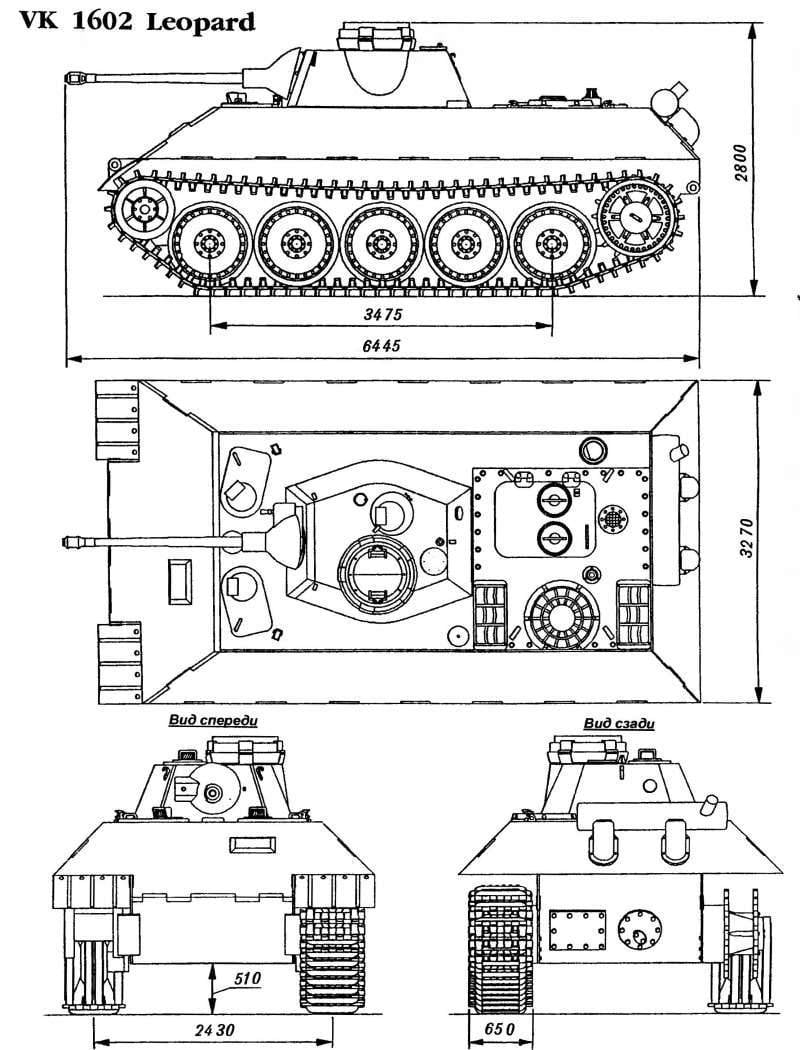 By its size, the development of the company Daimler-Benz was not supposed to differ from other light tanks of the German design, but surpassed them in terms of combat mass. The total length of the Leopard tank (with a cannon forward) did not exceed 6,5 m, the width was 3,27 m, height - 2,8 m. The clearance was determined at the level of 510 mm. The estimated combat weight of the tank was 26 t (according to other data, no more than 21-22 t).

Due to the use of a powerful 550-strong engine, the tank had to have a high power density, at least 21 hp. per ton. Due to this, he had the opportunity to accelerate on the highway to 60 km / h, the maximum speed on rough terrain was half as much. Cruising on the highway was determined in 300 km, on the ground - 150 km.

The plans for 1941 of the year implied the completion of design work by the autumn of 42, followed by testing and preparation for serial production. Thus, the assembly of serial tanks VK 1602 of one of two projects was planned to begin in April 1943 of the year. Until the end of the year, the troops were to receive 105 of such vehicles, and in the plan for the first half of 44, they installed another assembly of 150 tanks. Nevertheless, the mass production of tanks "Leopard" has not begun.

In the case of the project of the company Daimler-Benz, all work stopped at the design stage. By the end of the summer 1942, the Daimler-Benz design bureau did not have time to complete the development of the new tank, while competitors were already ready to present a chassis prototype. Because of this, and because of the persistence of some difficulties, the project was not brought to its logical conclusion. At some point, it was decided to abandon even the assembly and testing of an experienced reconnaissance tank.

Daimler-Benz VK 1602 Leopard light reconnaissance tank remained in the form of an incomplete set of drawings. The work was not continued, and the documentation soon went to the archive. It is quite possible that the modern confusion with the data on the two tanks of the same name arose, among other things, due to the unsuccessful completion of the Daimler-Benz project against the background of some success in developing a competitor. So, sometimes referred to the tests of the tank from the "Daimler-Benz", but in reality this machine was not even built.

Confusion with the two projects, among other things, led to the emergence of different data on the appearance of a promising armored vehicles. For example, the image-reconstruction of the appearance of the Daimler-Benz VK 1602 tank is known, which differs from the existing drawings. This version of the tank has a different shape of the side of the hull, which is formed not by inclined armor plates, but by rectangular boxes. Other materials on the VK 1602 project suggest that there are some errors and inconsistencies in reality in this reconstruction.

All doubts related to the reconstruction of the appearance are connected with the unsuccessful completion of the project. The Daimler-Benz tank was not implemented in the metal, and the amount of data available on this project leaves much to be desired. The competing project VK 1602 Leopard from the company MAN turned out to be more successful. He managed to reach the stage of construction and testing of the prototype, however, this time the machine was not able to enter mass production.