Russian Navy will receive universal ships for the Arctic

12 May 2016
61
The construction of a powerful military group in the northern direction requires not only the deployment of new bases, but also the construction of appropriate ships. In the foreseeable future, the ship group responsible for protecting the northern borders of the country will have to be replenished with two universal patrol ships of the Arctic zone of the ice class of the 23550 project. The other day a contract was signed for the construction of these ships.


On May 4, the Russian Ministry of Defense and the Admiralty Shipyards shipyard (St. Petersburg) signed an agreement under which two new patrol ships will be built. A construction contract implies the completion of works and the delivery of ships by the end of 2020. Thus, at the beginning of the next decade, the navy will receive special ships designed to operate in the northern seas.

About a year ago, Admiral Viktor Chirkov, Commander-in-Chief of the Russian Navy, spoke about plans for the development of the Arctic naval grouping, which are currently being implemented. In the spring of 2015, it was decided to build a universal vessel capable of solving a wide range of tasks. It was planned to develop and build a ship that can perform the functions of an icebreaker and tugboat, as well as capable of patrolling and destroying various targets. In the near future it was planned to determine the appearance of such a ship, and then develop a new project, according to which the construction should be carried out. 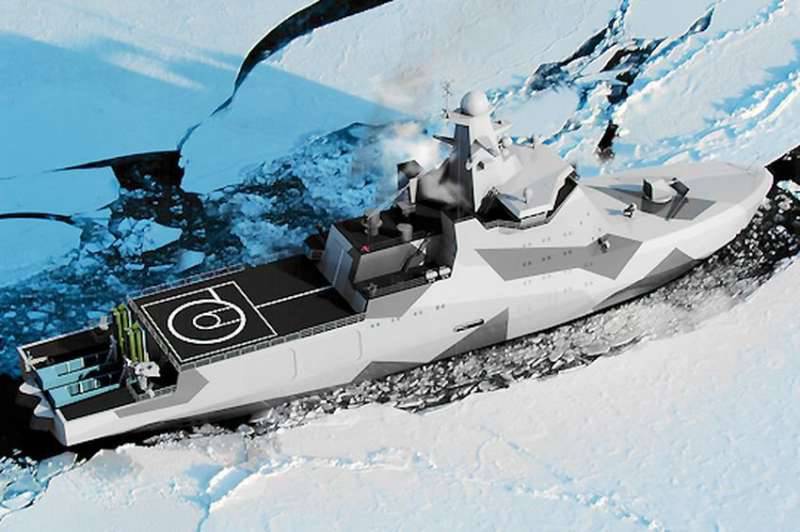 The appearance of a new universal ship. Figure Rg.ru

Already at the end of May, representatives fleet talked about the imminent completion of design work and plans for the construction of new ships. At that time, it was planned to build two universal ice class ships. In the near future it was supposed to begin the construction of promising vessels, but the timing of its launch was not specified until a certain time. Also, the technical details of the new project were not announced.

For the first time, a model of a promising universal ship for the Arctic, developed by the Krylov State Research Center, was shown for the first time at the International Naval Show, IMDS-2015. Construction of such ships was planned to deploy at the St. Petersburg factory "Pella". At the same time, some details of the new project became known, in particular, information about the equipment and armament of the universal ship was published.

A few days ago, a contract was signed for the construction of two new universal patrol ships under the 23550 project. The Ministry of Defense reports that these will be fundamentally new vessels combining several functions. Declared the ability to perform tasks in different regions, from the tropics to the Arctic. In the latter case, the ships will be able to overcome the ice thickness up to 1,5 m. According to the combination of characteristics and capabilities, it is claimed that promising ships do not have foreign analogues.

From the published information about the contract and the project 23550, it follows that the military ordered the construction of ships, previously announced at last year's exhibitions. At the same time, however, the construction contract was not received by the Pella plant, mentioned as a potential contractor, but by the Admiralty Shipyards enterprise. Previously published information, as well as images of a prospective ship, allow us to determine its main features, as well as draw some conclusions.

The 23550 project ships are designed to perform various tasks in northern latitudes, including ice-covered areas. This feature of the application had a significant impact on the characteristics and appearance of the ships. So, the most noticeable feature of the design is the characteristic shape of the hull, which is necessary to overcome the ice fields. At the same time, in the design of the hull and superstructure, some developments have been applied with little notice:

Outside the hull, it is proposed to mount a relatively large superstructure, as well as part of the armament. The tank provides for the installation of a large-caliber artillery system, behind which is the main superstructure with a bridge and a mast for electronic equipment. In the stern of the superstructure is a hangar for helicopters, for which there is a relatively large take-off platform. In one of the versions of the project presented at last year’s exhibition, a small platform with missile launchers was provided in the stern of the ship.

It is known that the universal patrol ships of the 23550 project will have a full displacement at the level of 6800 m. The length is defined in 114 m, the width of 18 m and the draft is 6 m. The crew will include 49 people. In addition, it is possible to take on another 47 man.

The main power plant with a total capacity of up to 15000 kW should be located in the central part of the hull. As the main means of movement, the ships will receive two full turn rotary steering columns with 6000 kW each. In order to increase the maneuverability, the columns should be supplemented with a double thruster of the tunnel type placed in the forward part of the hull. The power of such a system should reach 500 kW. Unfortunately, the exact types of basic elements of the power plant have not yet been named.

The ship will be able to reach speeds up to 18 nodes, the cruising range will reach 6 thousand nautical miles. The hull design will allow it to overcome ice thickness up to 1,5 m. With constant movement, the thickness of the ice to be overcome should not exceed 1 m.

To combat surface and air targets, ships of the 23550 project must have a complex of artillery and missile weapons. On the tank, in front of the superstructure, an A-190 artillery system with a 100 caliber mm gun must be mounted. It is also possible to use anti-aircraft guns of existing types. On several layouts and images it is also seen that the installation of lifting devices for the impact missile complex is provided in the aft part of the ship hull. In this case, the ship can carry two launchers with four missiles each. Probably the use of the Caliber missile system or a similar system. At the same time, the characteristic appearance of the units shown in some of the drawings makes us recall the Club-K complex in container design.

Some tasks may be associated with the use of helicopters or boats. It is known that a promising ship can indeed carry additional light equipment. Aviation The patrol ship group consists of one Ka-27 helicopter or similar. To transport the helicopter and the means necessary for it, a hangar is provided in the aft part of the superstructure. Using a helicopter, it is possible to increase the detection range of various objects. In addition, the helicopter can carry out ice reconnaissance, transport goods and people, as well as be used for other purposes.

The sides of the hangar for a helicopter in the superstructure are lazport, intended for the storage of boats and life rafts. Also under the helicopter deck there are two large hangars in which the patrol ship must carry boats with weapons. According to reports, the dimensions of the hangars allow the 23550 project ship to carry two 03160 Raptor speedboats. The latter, with a displacement of up to 23 t, are capable of carrying machine guns of various types and carrying 20 paratroopers. The most important feature of the Raptor boats is the ability to move at speeds of 48 nodes, which allows it to quickly deliver troops to the place of operation or catch up with other ships. 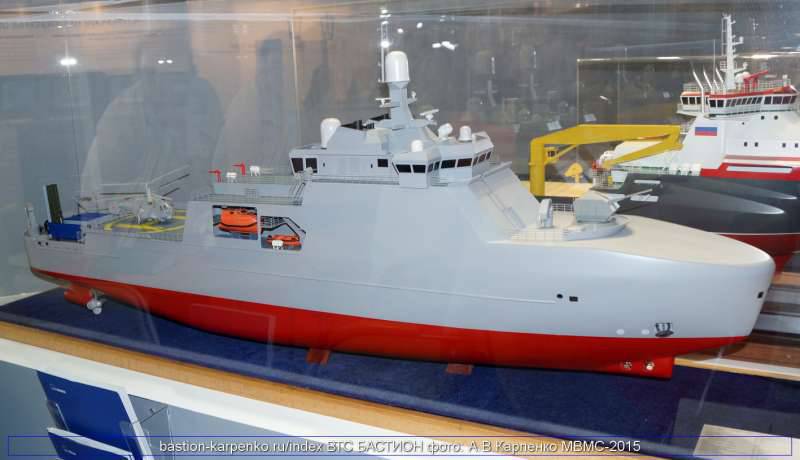 One of the layouts shown last year. Photo Nevskii-bastion.ru

Universal ships of the new project, among other things, will have to perform the tasks characteristic of tugs. For this, according to available data, they will receive towing devices with a pull force of at least 80 tf. In addition, the proposed use of two cranes with a lifting capacity of up to 28 t each.

Due to the installation of a variety of equipment and weapons promising patrol ships will be able to solve a wide range of tasks of combat, transport, etc. character Artillery and missile weapons will allow you to attack surface or coastal targets, as well as defend against air attack. Such opportunities will provide patrols of the specified water areas and escort of various vessels, including with their protection against possible threats.

The presence of high-speed boats and helicopters allow the patrol ship to carry out the arrest of violators and all necessary subsequent procedures. Given the characteristics of the aircraft and boats of the 03160 project, it can be assumed that it will be extremely difficult for the intruder to escape from prosecution.

Using the hull of the corresponding design and working as icebreakers, ships of the 23550 project will be able to guide caravans through the ice. Towing equipment and cranes allow patrol ships to participate in rescue operations, tow damaged ships and help other ships in other ways. Also, the flight deck can be used to place certain goods in standard containers.

Within the framework of the 23550 project, for the first time in domestic and world practice, a ship was developed that was originally intended for solving a wide range of diverse tasks typical of vessels of other classes. Thus, Russian shipbuilders made a technical breakthrough in their industry, and also provided important assistance to the navy in the formation of a ship group for the Arctic. The appearance of multipurpose ships will, to a certain extent, simplify the creation of a grouping by combining several functions in one ship and the absence of the need to build several ships for different purposes.

In accordance with the terms of the signed contract, the Admiralty Shipyards shipyard will have to build, test and transfer to the customer two new ships by the end of 2020. Information about the possible continuation of the construction of ships of the project 23550 is not yet available.