The Washington Post: the battle for "the most valuable real estate in space"

12 May 2016
20
Spacecraft groupings have long become an essential element of the armed forces of different countries. In addition, concerns about the possible expansion of hostilities to outer space with the use of appropriate anti-satellite systems began to be expressed long ago. For obvious reasons, such prospects are a serious cause for concern for specialists and the general public who are interested in the future of armaments and equipment.


9 in May, the American edition of The Washington Post published an article by Christian Davenport “A fight to protect the most valuable real estate in space” (“Battle for“ the most valuable real estate in space ”). The American journalist studied the topic of anti-satellite combat systems and made some conclusions about the prospects of such weapons, as well as its impact on the strategic situation.

His material K. Davenport began with a reminder of the most famous case of using anti-satellite weapons. In 2007, the Chinese military launched a new type of special rocket that hit an inactive satellite, destroying it and creating a large cloud of debris. Later, China conducted another similar test of new weapons. As a result of these events, the Pentagon began to pay increased attention to new weapons that could lead the war into space. 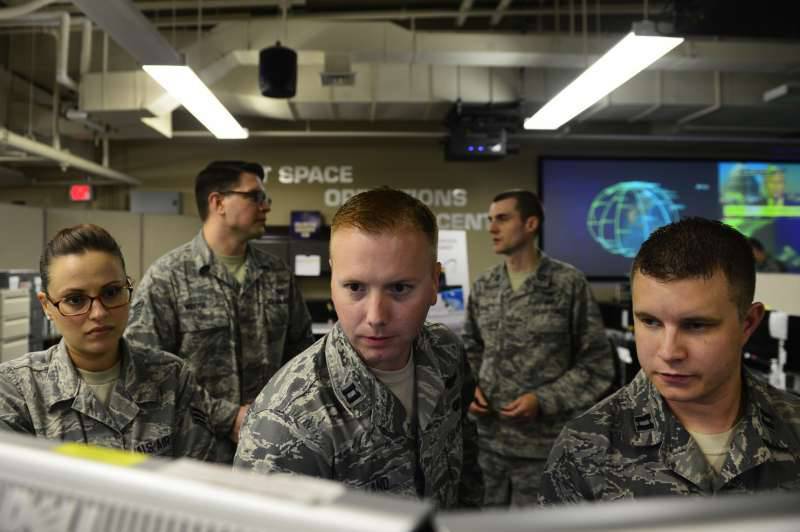 The reason for this concern is related to the characteristics of the Chinese interceptor missile. The purpose of the second interception was in a geostationary orbit at an altitude of about 22 thousand miles (about 35 thousand km). It is at this altitude that the main spacecraft of the military grouping of various countries, including the United States, are located. As a result, a successful attack of a target in a remote orbit was cause for concern.

The second test launch did not lead to the defeat of the target, since the interceptor passed next to it. Nevertheless, this was enough to start a new program. The US Department of Defense and Intelligence was forced to envisage significant expenditures to study new topics. The purpose of the new works, according to the head of the US Air Force Space Command, General John Heithen, is to “protect the most valuable real estate in space,” namely, the numerous satellites for various purposes used by the military and other security forces.

The emergence of the risk of the destruction of spacecraft in different orbits has led to the emergence of several new ideas concerning the protection of satellite constellation for reconnaissance purposes. First of all, this is a decrease in the sensitivity of satellite equipment to electronic warfare systems. In addition, there was a proposal to use not small large and complex devices, but to put into orbit groups of small satellites. It is assumed that such intelligence systems will become a much more difficult target for enemy interceptors.

Administrative measures are also being taken. The US Secretary of the Air Force is now also responsible for the actions of the armed forces in outer space and can coordinate with various other agencies. The Air Force and other structures conduct research and exercises aimed at testing the main features of prospective conflicts in outer space.

K. Davenport notes that the intensification of the current activities of countries in space may be a sign of a new arms race, since it is space technology that can now be considered one of the most important. For example, the Pentagon is currently developing a Space Fence system, the task of which will be to track space debris with enhanced characteristics in comparison with existing tracking systems.

Specialists of law enforcement agencies and intelligence services are now worried not only about the withdrawal of their spacecraft into orbit, but also about preserving their performance in terms of the use of countermeasures by the likely adversary. There are risks of using various types of systems that can blind the satellites. In addition, it is possible to deploy "parasitic satellites", the task of which will be the deterioration of the working conditions of reconnaissance vehicles. The author believes that such actions by opponents will not allow soldiers to properly navigate and work on the battlefield, and high-precision weapons will lose the ability to correctly search for targets.

C. Davenport quotes Robert O. Work, Deputy Secretary of Defense. According to the latter, for a long time, space was considered as a kind of safe reserve. As a result, most spacecraft have large dimensions, are distinguished by a high price and can do a lot, but this technique is extremely vulnerable to various threats. The most striking feature of the current situation in the field of space weapons, according to the author, is the fact that US officials are openly talking about existing problems, but the information about work in this area is still not subject to disclosure.

In recent years, active development of promising anti-satellite systems could be underway. American experts believe that while the United States was engaged in the fight against terrorists in Afghanistan and Iraq, Russia and China developed promising systems for attacking American spacecraft.

Commenting on the risks associated with space weapons, General J. Heiten argued that, at present, any military operation in the world is critically dependent on various satellite systems. Whether specialists of the United States understand this or not - the whole world will follow them.

The Washington Post author recalls that since 1991, after the Gulf War, the United States military has become increasingly dependent on spacecraft for various purposes. Satellites of various models are used to obtain images of the terrain, communications with remote areas and navigation, which can be used both for the movement of ships or aircraft, and for targeting high-precision weapons. In addition, satellite navigation, as well as some other "space" technologies, have long entered the life of the civilian population and are widely used in various fields.

New opportunities provided by the operation of the satellite constellation, gave the US troops significant advantages over various opponents. In this regard, the army and security forces regularly carried out launches of new satellites of one purpose or another.

The possible emergence of Russia and China of some promising means capable of disabling the space infrastructure is a cause for serious concern to American officials. The Pentagon is seriously afraid of such a scenario, in which its satellites will have to "hide" from a potential enemy. However, some evidence of the existence of such threats have already been found.

Not so long ago, the head of the US strategic command, Admiral Cecil Haney, said that the DPRK specialists had succeeded in drowning out the GPS satellite signal. Iran, in turn, is engaged in its own space program. Also, the command has information about falling into the hands of some terrorist organizations of special encrypted communication technologies used in the space industry. The admiral was forced to admit that, despite all efforts, the future conflict could begin in space or, starting on Earth, go into outer space.

The leaders of the US military began to show concern for a long time, associated with promising systems of foreign countries, but until a certain time did not express it. All claims of urgent action began to be made only after the Chinese 2013 trials of the year. General J. Heiten recalls that at that time there was a serious disappointment in the near-cosmic circles of the United States. To solve the existing problems a certain push was required. The impetus to the beginning of work in the new direction became the statements of R.O. Wark In 2014, during one of the meetings, he asked a simple and straightforward question: if the conflict really goes in space, what will the armed forces do?

According to K. Davenport, the Pentagon currently spends 22 billion dollars on space industry projects. In addition, this year 5 billions were additionally allocated for such developments, and 2 billion was planned to be spent on so-called. space control: a program that includes a number of classified weapons projects. Are there any anti-satellite systems among the new developments - the official representatives of the armed forces do not specify. Nevertheless, it is known that in 1985, the American specialists managed to shoot down an old satellite with the help of a special air-based missile. Consequently, the US has the technology necessary to deal with objects in orbit.

New plans for the protection of satellite constellation are approved by experts. For example, Elbridge Colby, a senior fellow at the New American Security Center, believes that the Pentagon is moving in the right direction. If the United States could conflict with Russia or China, then the risks associated with critical and vulnerable space systems should be taken into account.

About six months ago, the United States military commissioned a new operations center for the space group. According to General J. Heiten, the start of operation of this facility was very slow - for a long time the military simply did not think about the need for such a center. However, the staff of the new center has already begun work. It is assumed that the operational center will improve the interaction of various structures of the armed forces.

J. Heiten notes that there has been a significant change in attitudes towards work. Previously, space was considered as a relatively safe environment, but now it looks different. Thus, now specialists working in the space industry must remember that they are military personnel and have corresponding tasks. Nevertheless, it is noted that the Pentagon does not intend to incite the war, but takes measures aimed at its exclusion.

In the context of promising anti-satellite weapons, the author of The Washington Post recalls recent statements by US Undersecretary of State for Arms Control Frank Rose. This official openly expressed concern about the development of Russian and Chinese anti-satellite weapons. He also noted that the United States is trying to prevent conflicts from entering outer space and intend to use available diplomatic means for this. According to F. Rose, no one is interested in the transition of war into space.

According to K. Davenport, the very fact of the appearance of the statements of the Deputy Secretary of State indicates the seriousness of the problem. E. Colby, in turn, notes that the loud, consistent and to some extent dramatic statements by the Pentagon also confirm the importance of the topic.

To date, China has demonstrated its potential in the fight against satellites, having completed two test interceptions. These activities have become a cause for serious concern. Brian Weeden, technical advisor to the Secure World Foundation, recalls that the interceptor missile flight at a minimum distance from the satellite in geostationary orbit, where a large number of critical devices are located, very much frightened American specialists.

After this test launch, official Beijing announced testing of a ground-based interceptor missile. It is noteworthy that Chinese officials denied the anti-satellite mission of the new development.

Russian developments in the space industry are also worrying the US military. In the 2014 year, Russia put a satellite into orbit, which can pose a certain danger. This device gained fame after it passed between two commercial satellites of the Intelsat series, and then approached the third. B. Weeden argues that there was no danger of a collision, but the distance between the vehicles was reduced too much. Unfortunately for an American journalist, the Russian embassy declined to comment on the incident.

General J. Heiten believes that without the modern satellite constellation, the United States will have to return to the “industrial era” of the war. The army will have to fight using the technologies of the Second World War, the Korean and Vietnamese wars, while high-precision missiles and smart bombs will be simply inaccessible. As a result, losses will increase, and collateral damage will be higher. J. Heiten does not intend to conduct combat operations in this way, since this is not the “American way” of war.