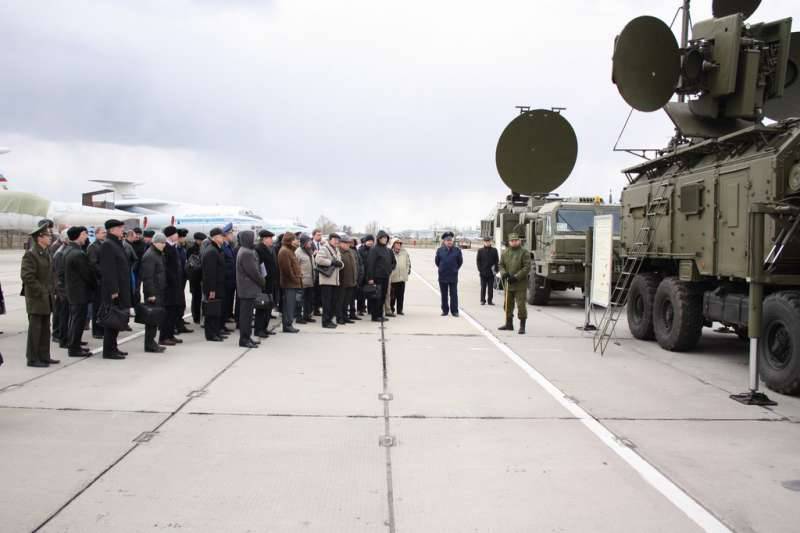 As 25 learned on April 2016, the ground-based and airborne electronic warfare systems Krasuha-4, Khibiny and Himalaya will not be the only horror for the command of the US Armed Forces, as well as the Allied Forces in various theaters of operations. According to TASS, the Concern Radioelectronic Technologies (JSC) has started the testing phase of some elements of the multi-channel and multi-frequency promising modular EW complex currently being developed, designed for strategic defense of the Armed Forces units, industrial and civil infrastructures from enemy strategic aerospace offensive operations.

According to one of the representatives of the concern, the new complex will be formed on the basis of a large number of radiating antenna modules, the energy potential and frequency of which will be set individually, and their antenna posts will receive specialized individual protection systems against air attack weapons.

From this information it follows that, firstly, almost every radiating module of the new electronic countermeasures system will be presented by AFAR, which will allow suppressing several dozen enemy radar and electronic means by multiple digital beams (even one module will be multi-channel), and the system a digital information distribution bus with an open architecture will allow you to connect tens and hundreds of similar modules, which will allow you to fight immediately against thousands of enemy assets. Secondly, the new electronic warfare system will implement an action exclusively aimed at the enemy, which will not create chaos among our units of RTR, air defense, as well as military and civilian aviation.

Coordinates of all radio-emitting and radio-contrast enemy objects participating in an MRAU or any type of offensive operation will be relayed to distribution points and control of EW modules from any ground-based, sea-based and airborne reconnaissance (Radar-DRLO “Oppotnik-G”, “ Gamma-С1 ”, low-altitude detectors of the“ Three Hundreds ”76Н6, general ship radar“ Fregat ”,“ Furke ”, СРТР and passive location“ Valeria ”, airborne airplanes A-50U). These capabilities will allow the electronic control system from KRET to form the most accurate digital picture of the tactical situation with all sources of threats: thanks to the A-50 linking, tactical and strategic cruise missiles outside the radio horizon can be easily pinned off, thus allowing the EW ground posts to be prepared for pre-determined angles and azimuthal coordinates.

A promising EW system also has a number of additional unique qualities that are not available to any Western country today. Thus, due to the huge separation of antenna EW post-modules from each other and from command and control points, the system is able to operate on vast expanses of the Russian Federation, covering the most important Far Eastern, Arctic and European strategic directions with a thick sheet of radio-electronic interference. The functionality of the system will exceed the performance of the Krasuha-4 complex thousands of times: it will be possible to link it not only with single divisions or brigades of the C-300 / C-400 air defense system, but also with structures such as the 1-e Leningradsky Red Banner Air Force Command and Air defense. Even before the enemy’s air attack system enters our enemy’s ground defense system, their means of obtaining external target designation, and the homing system, will be exposed to the most powerful radio-electronic interference: a substantial part of them will be put out of action, and the air defense system will finish. That is, the additional purpose of the advanced EW system is to ensure increased survivability of air defense.

Separate REB radiation modules, as if controlled by a block of an array of electric strings, can be switched on in groups in one or another section of the theater, where air defense and aviation systems will need support with a disproportionately larger amount of high precision weapons the adversary. To this can be attributed the Baltic UN or the North-Western United Nations, on which the combined arsenals of the US SLCM / ALCM and NATO amount to thousands.

TYPES OF RADIO ELECTRONIC INTERFERENCE, AND ALSO ADDITIONAL MEANS OF PROTECTION OF EW MODULES OF NEW SYSTEM AGAINST HIGH-PRECISION WEAPONS

Being a multifunctional ground-based EW complex, "Krasuha-4", equipped with a narrow-beam parabolic antenna, is capable of targeting, broadband noise, as well as barrage interference. The airborne radar “Raptor” AN / APG-77, operating in LPI mode (reduced power and frequency hopping at a frequency of 1 kHz), cannot be “silenced” only by targeted interference, therefore noise and barrier interference will be more appropriate here.

The possibility of placing the modules of the advanced EW system on air carriers is a unique solution, but the tactical situation is very unstable. Today, EW planes could operate over a given area of ​​the theater, and tomorrow - a whole brigade of "Patriots" or temporary supremacy of enemy fighter aircraft would force them to look for other carriers, or to apply passive radio-electronic interference, which in a complex terrain has a number of features that can finally get radioelectronic means the enemy in a "dead end", and act on much larger spaces.

The “focus” is that passive REBs, due to the possibilities of multiple reflections from various artificial and natural reflecting objects with the properties of conductors (to a greater degree) and dielectrics (to a lesser degree), can cover large spaces through the use of specialized dielectric lens , tape and dipole reflectors scattered from aircraft and deployed on the earth's surface. In addition, in the concept of passive REB, innovations may appear, represented by the antenna module emitter of passive interference, which can be “sheltered” from the enemy reconnaissance aircraft behind a mountain ridge or other elevation of relief; This interference can be called semi-active.

Even in spite of the fact that the power of such “relayed” interference (especially in the case of natural reflecting media) is rather weak due to the large scattering coefficient, their efficiency can be quite high against tactical radio communication channels such as fighters performing low-altitude flight in an area where multiple retransmission of radioactive electronic interference occurs. As for passive interference with the use of artificial reflectors, there has also been significant progress over the past 30 - 40 years. Angular, tape and other reflectors began to equip inexpensive and effective microprocessor signal amplifiers that can not only confuse the enemy’s radar with a reinforced reflected signal in the form of dozens of false targets on the pilot’s display, but also change the frequency range of the received signal, which would be misleading the number of enemy radar and communications equipment on a conditional front area of ​​several hundred kilometers. Due to the possibility of introducing active sources of radiation and amplifiers into the method of setting passive REBs, the possibility of frequency correction of REBs appeared, which is a solid advantage in various tactical situations where the enemy can use various radio equipment. Thus, in large regional theaters, all frequency ranges of the REB setting will be important: against tactical aviation and missile defense systems - this is the centimeter X-band, against the DRLO and BIUS “Aegis” aircraft - against the decimeter S-band, against long-range radar and communication channels - decimeter and meter ranges.

The types of radio-electronic interference are also classified according to the effect on the enemy’s radio and electronic equipment. They include imitating and masking REB, and imitating are the most complex and promising.

Imitating interference creates a false information tactical picture for enemy air, land and sea radars. For example, in our troops there are a huge number of different stations of passive electronic and electronic reconnaissance, air defense missile systems, mobile ground-based operational-tactical and strategic missile systems, BPKRK, etc. Each combat vehicle of these complexes has a unique effective scattering surface of the reflected radar signal of RTR aircrafts and enemy target designation, among which the best Western models are the E-8C J-STARS, F-35A, F-22A and the Global Hawk unmanned aircraft "And" Triton "; They are equipped with powerful synthetic aperture radar. The EPR of our ground units can be clearly calculated in the anechoic chamber, and also confirmed during irradiation with the radar of the Tu-214Р aircraft in natural conditions on the ground, and then transferred to the developers of the promising EW system for further inclusion of a simulated type into the program catalog. In this way, any sample of a ground-based launcher identical to a real one can be modeled on the enemy’s radar screen (from launchers of the C-300PMU-2 - 5P85CE complex to the SPC K340P of the Bastion complex). The setting of imitating interference can overload the throughput of enemy radars, which will not effectively select real targets and could lead to the failure of a military operation.

A similar technique is already being embodied in the American cruise missile of the EW MALD-J, which simulates the EPR of various NATO OVS aircraft.

Electronic warfare equipment, just like the RTV radar and anti-aircraft missile systems, are the first targets on the list of destruction of the US and NATO air attack weapons. It is logical to assume that a more advanced analogue of the 34YA6E "Gazetchik-E" radar protection complex will become an excellent defensive means for ground or sea modules of the advanced electronic warfare system "Concern Radioelectronic Technologies" at the time of unforeseen circumstances (the approach of a HARM, SLAM-ER or JASSM-ER ). The complex is activated at the moment of detection of an approaching element of a high-precision weapon by an autonomous RLO. The radar / electronic warfare station is turned off, dipole reflectors and aerosols are thrown into the air, and multifrequency generators are also turned on to divert and withdraw PRLR, missiles with IKGSN and laser seeker. But new modifications of "HARMs" are capable of memorizing the initial coordinates of the radiation means, and therefore active protection complexes may also be required, which have taken root well in armored vehicles, especially in modern tanks.

The new EW system will provide strategic support where the provision of the required air defense units may be insufficient and hide from the eyes of all the most important operational and tactical movements of our army throughout the country.