6 May 2016
8
The remotely controlled machines Sd.Kfz.301 and Sd.Kfz.302 / 303 of the German design made it possible to solve the tasks set, however, they were not distinguished by high perfection. Various claims were made against them. For example, the larger and heavier carrier of the Sd.Kfz.301 explosive charge was relatively expensive to manufacture, and the compact and lightweight Sd.Kfz.302 / 303 apparatus was not distinguished by high combat survivability. However, remotely controlled blasting machines were still of interest to the customer, which led to the emergence of a new project. In 1944, the German industry started creating the Sonderkraftfahrzeug 304 machine.


The goal of the new project, the development of which was entrusted to NSU Motorenwerke, was to create a new blasting machine with direct control and remote control that would be simpler and cheaper than the existing Sd.Kfz.301, and would also surpass Sd.Kfz.302 / 303 with in terms of the weight of the transported charge. The new project received the official designations Mittlere Ladungsträger (“Medium charge carrier”) and Sd.Kfz.304. In addition, at a certain stage, the project received another name - Springer (“Jumper”).

Requirements regarding the cost and characteristics of the new technology led to the formation of an appropriate appearance. It was possible to provide an acceptable load capacity at a relatively low cost of production only through extensive use of existing components and assemblies. It was decided to build a new vehicle based on the half-track Sd.Kfz.2 motorcycle, also known as Kettenkrad HK 101. This sample was supposed to share with his new power plant, chassis and a number of other systems. At the same time, it was planned to develop some new parts necessary for combat work in a new capacity.

The largest new unit for the Springer was an armored corps. The original Kettenkrad units did not suit the authors of the new project, which is why it was proposed to mount a completely new building on the existing chassis. In addition, its need to some extent was due to the failure of the front wheel and the full transition to the tracked propulsion with the corresponding changes in control systems.

The Sd.Kfz.304 blasting machine was to be equipped with a case of complex polygonal shape formed by several armor plates. To protect against attacks from the front hemisphere, it was proposed to use front sheets with a thickness of 10 mm, the sides were made of 9-mm parts. The roof and the bottom should have a thickness of 8 mm.

The front part of the car received a characteristic shape formed by several oblique parts of different sizes. In the center of the hull a small horizontal section of the roof was envisaged. The stern of the roof, in turn, was inclined backwards. Boards were established vertically. A curious feature of the hull of the new machine was a collapsible cabin in the stern. To control the machine on the march should have been used built-in control station. To access it, it was necessary to lift and fasten in a sloping position three sheets, forming a small cabin with a wall thickness of 9 mm. When using the radio control department should be closed.

The layout of the blasting machine was based to some extent on the decisions of the base semi-tracked motorcycle. It was planned to install a blasting charge in front of the hull, with an engine and transmission located next to it. The feed was given under the control department with radio systems and a control post for the driver. 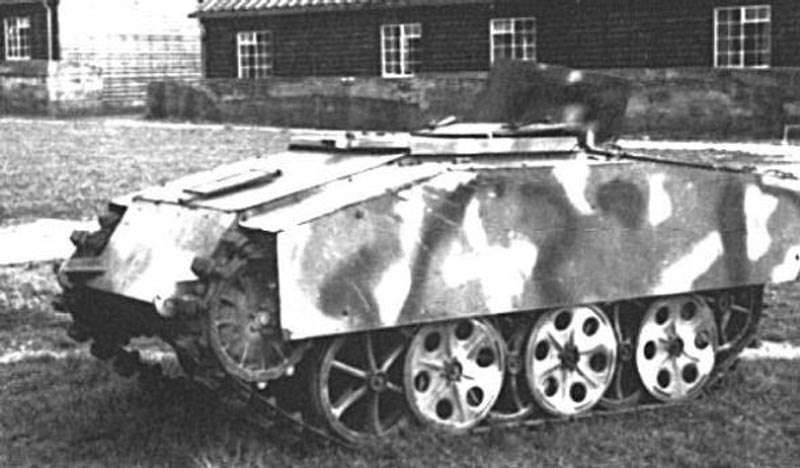 The power plant and the transmission of the base chassis has not changed. It was still planned to use the Opel Olimpia gasoline engine with 37 horsepower. Through a mechanical transmission with a two-speed gearbox, the torque had to flow to the front-wheel drive wheels. Due to the absence of an additional front wheel, as on Sd.Kfz.2, the rotation was proposed to be carried out using a differential and other transmission units that change the speed of rotation of the driving wheels.

Tracked propulsion borrowed without modifications, whereas the front wheel completely abandoned. The chassis of the Jumper included six road wheels each with an individual suspension arranged in a staggered pattern. With considerable excess over basic rollers driving wheels were established. The stern guide wheels, in turn, were raised slightly above the support surface. A small-track caterpillar with steel tracks of single-ridge construction was used.

In front of the hull mounts were provided for the transport of blasting charge. A special container contained 330 kg of explosive and a suitable design fuse. According to some reports, the Sd.Kfz.304 machine, like its predecessor Sd.Kfz.301, was supposed to deliver a charge to the target, drop it and return to the operator. According to other sources, the charge was detonated without prior discharge.

In the basic configuration, the subversive machine was to be equipped with two control systems. On the march, it was proposed to use the usual mechanical controls installed in the aft of the hull, in place of the driver. Directly during the delivery of the charge to the target, the radio control system of the type KE6 mit ULE6 should have been applied. With the help of a separate remote driver-operator could control the movement of the machine, as well as perform the discharge of a subversive charge. 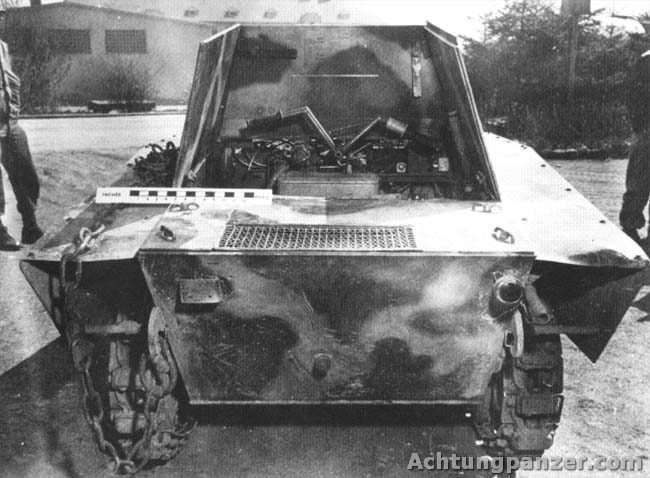 Rear view of the wheelhouse with the driver's workplace. Photo by Achtungpanzer.com

It was assumed that the machine Sd.Kfz.304 will act as follows. Under the control of the driver, located in the aft hull, she had to get to the place of combat work. After that, it was necessary to prepare all the necessary units, first of all, the radio control and the fuse, which made it possible to proceed with the attack. The driver’s task was to bring the car to the line of sight with a view, after which he had to leave his seat and lay down the cutting elements, turning them into the roof of the hull. Then control was exercised with the help of radio commands. With the help of a special console, the car was required to lead to the target and drop the charge, or to blow it up without resetting. In the first case, the car running on the radio had to return to the driver.

By the fall of 1944, the company-developer completed the design and began to build an experimental blasting machine. During the tests, the prototype of the new technology showed good mobility indicators, and also demonstrated acceptable controllability from both the built-in post and the remote system. The characteristics shown proved the fundamental possibility of using Sd.Kfz.304 Springer in a real battlefield for the destruction of enemy fortifications or armored vehicles.

However, it was not without flaws. Taking into account the operating experience of blasting machines of existing models, there were claims to booking a new sample. Its maximum protection was 10-mm armor plates mounted at different angles to the vertical. This made it possible to protect the driver and the car’s aggregates from some small weapons and light fragments, but more serious systems with enhanced characteristics could hit the equipment without any problems. Due to the presence of a large destructive charge, the probability of the survival of a vehicle when firing from a large-caliber gun or using artillery was extremely small. 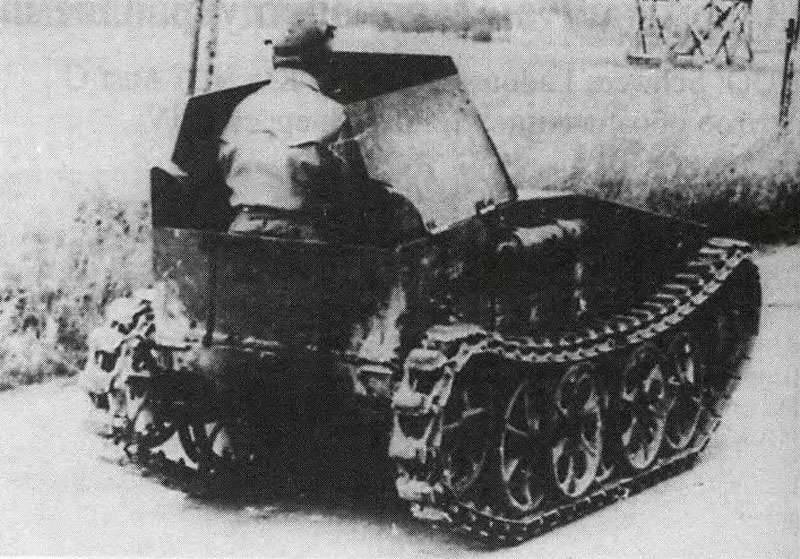 Placement of the driver in the car. Photo of Chamberlain P., Doyle H. "Complete reference book of German tanks and self-propelled guns of the Second World War"

Despite fair claims, the Mittlere Ladungsträger Sonderkraftfahrzeug 304 Springer subversive machine was recommended for use. Already in October, 1944, the firm NSU Motorenwerke began the serial assembly of such equipment. Serial construction of blasting machines to a certain extent facilitated by a high degree of unification with the existing half-track motorcycle. As a result, the company quickly enough could reach a relatively high pace of construction and fulfill the order. Production of machines Sd.Kfz.304 lasted until January (according to other data, until February) 1945. During this time, according to different sources, they managed to collect and transfer to the customer from 50 to 90 machines with radio control.

Even at the testing stage, it was found that the new blasting machine, despite the heavy and effective charge, is characterized by its large size and insufficient protection. These design features, combined with other problems characteristic of remotely controlled vehicles of the time, could lead to a serious reduction in combat effectiveness compared to the expected one. In fact, the military began to doubt the use of the Jumpers for their intended purpose and demanded that a new tactical role be found that the existing design problems would not interfere with.

Attempts to make on the basis of Sd.Kfz.304 a new assignment machine encountered some difficulties. The charge carrier was too large for a remotely controlled subversive machine, but it was not large enough to install any weapons or special equipment. Such features of the machine seriously hampered the design refinement with the development of new specialization.

According to reports, it was first proposed to equip the finished chassis with a recoilless 105 mm caliber gun and the necessary additional equipment. However, a suitable weapon was too powerful and could damage the design of the carrier. From the proposal to use Sd.Kfz.304 as a base for self-propelled artillery self-propelled guns. 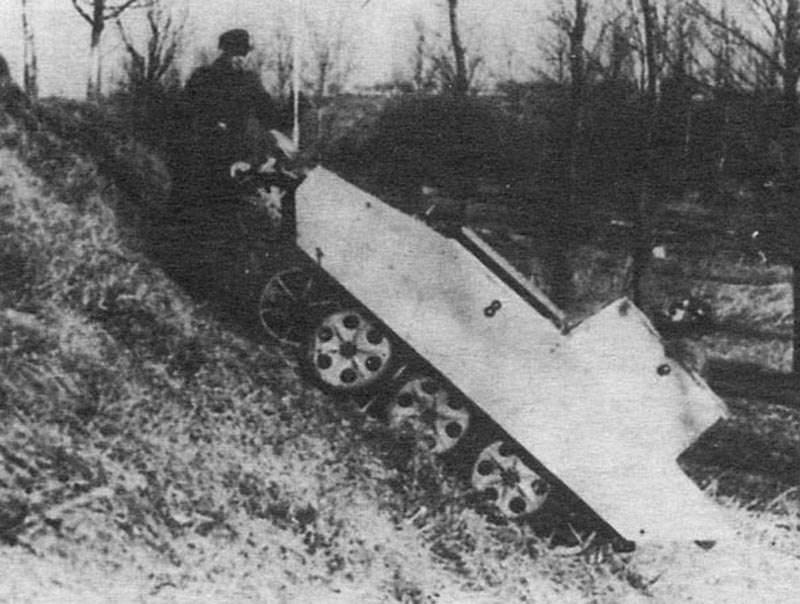 After the failure to install the gun, it was decided not to use any heavy and large additional units. There was a proposal to remake the existing equipment into light observation vehicles for artillery. In this case, it was possible to find use for existing machines, as well as to dispense with major design modifications with corresponding difficulties. According to reports, when converting to a surveillance machine, Springer lost his radio control, but received some monitoring devices.

There is information about sending a number of Sd.Kfz.304 vehicles as mobile observation posts to the artillery units of the German army. This technique was transferred to the troops rather late and in small quantities. As a result, the new machines did not have a noticeable effect on the course of the battles. Moreover, information about their combat use is missing. It can be assumed that the observation vehicles did not even have time to take part in the battles and help artillery to search for targets.

The Mittlere Ladungsträger Sd.Kfz.304 Springer subversive machine was the last such development of Hitler's Germany, which managed to reach mass production. From the end of the thirties to the end of World War II in Europe, German specialists were engaged in the creation of remotely controlled special equipment and even achieved some success in this area. However, in practice, the new technique very rarely demonstrated its full potential set by the project. Despite all the efforts, remotely controlled vehicles of all serial types were used limitedly and, naturally, could not help Germany avoid defeat.