AK-12 and А-545 (АЕК-971) automatic rifles undergoing state tests have the accuracy of shooting (less) times in 1,5-2, which is less than AK-74, which is unconditionally considered an improvement.

However, in the Russian Federation there is already an automaton, the accuracy of the first two bullets of which is significantly, according to some information, up to 20 times better. This is a Nikonov AN-94 assault rifle, which has been in service for quite a few years, but has not received the kind of distribution that it would seem to be guaranteed with such good accuracy. A more complex AH-94 device is constantly being noted, but there is no significant increase in combat effectiveness — an increase in the probability of hitting real targets in battle. If you do not understand the reasons for the lack of demand for better accuracy of AN-94, then AK-12 and A-545 will repeat his fate. 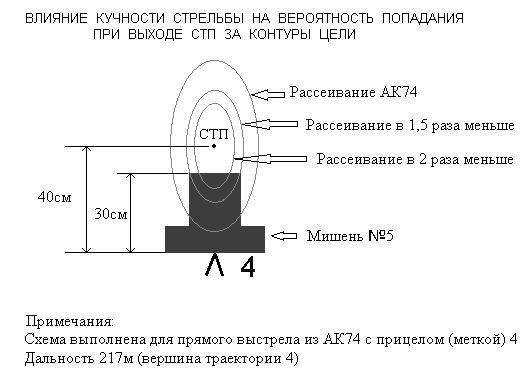 Fig.1. Scheme compiled by the author

It is important to understand that Fig. 1 is not an abstraction, this is exactly what happens in combat with AK-74: at ranges of 150-300 and the main number of bullets go above the dead infantry. The fact is that AK-74 sights are optimized for a direct shot at too high - a chest target whose height is 0,5 m (Fig.3, target No.6). The AK-74 Guide [2, article 155] requires you to shoot a direct shot from the “P” or “400” marks to the range of 4 m. At the sector sight AK-74 there is a special mark “P” - the range of a direct shot at the chest target. And almost all mounted sights for AK-74 - collimator, optical, night, thermal imaging, etc. - do not have target marks less than “4” (400 m), for example, 1P29 optical sight, 1P77, 1P78, night sight 1PN93-2 AK-74 (Fig.2) and others. On the collimator sights, the only aiming mark is also reduced to the 400 m range. That is, with mounted sights, the machine gunner does not even have the technical capability to shoot at 400 meters from a different mark than the 4. 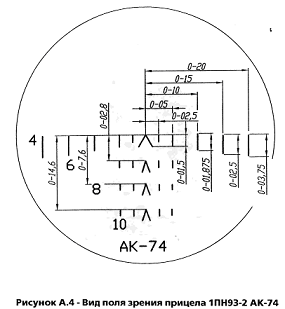 And in battle, man instinctively seeks to hide behind the parapet. Behind the parapet, they demand that foreign armies, for example, the US Army [3], take the position and instructions of foreign armies. Therefore, the main goal in the battle for our machine gunners is the shooter behind the parapet [4]. Veterans of the fighting in Afghanistan recall: “In battle, only the“ caps ”of the dushmans were visible above the stones. It was into these “caps” that one had to fall! ” 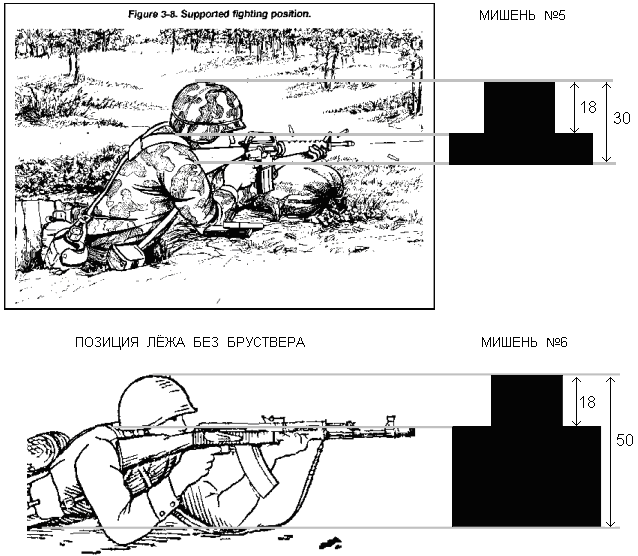 The shooter behind the parapet has the height of the entire 0,3 m (Fig.3, target No.5) and in our course of shooting is indicated by the head targets №№ 5, 5a and 5б. The “4” trajectory rises above the arrow behind the parapet at distances from 150 to 300 [2, the table “Exceeding trajectories over the aiming line, AK-74”]. Therefore, at these ranges, the AK-74 has an insufficient probability of hitting the main target (Fig. 4, label "4"). 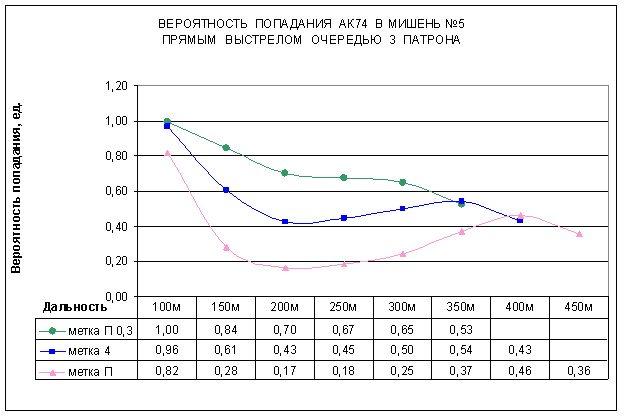 Fig.4. Calculated by the author

Because of the lack of probability of hitting the target with a height of 0,3, machine gunners are on the course of firing the Defense Ministry at head targets and are not firing. None of those exercises of the course of shooting, which are carried out by one submachine gun, has no main goals. Neither in primary, nor in training, nor in control or qualification shooting machine gunners do not shoot at the head target. Moreover, the head target is not found in any exercise of the discharge norms of the unified All-Russian sports classification for the machine gun [the current course of shooting, the 19 application]. Thus, not only during training, control or qualification, but even in the sports category up to the title of “master of sports in shooting sport from a machine gun” machine gunners do not shoot at the head target.

The same thing in the course of shooting for the Interior Ministry troops.

For machine gunners in the exercises of the shooting course, the lying infantry is simulated in a simplified way - high (0,5) targets No. 6, which correspond to the arrow leading the fire while lying on level ground with elbows (Fig.3). This simplification allows machine gunners to get on the shooting range, but leads to ineffective shooting in battle, as in battle a rare crank takes up a position on level ground without a parapet, mostly infantry — this is target number XXUMX (Fig.5).

Simplification is necessary to stop, and for this it is necessary to increase the likelihood of an automaton hitting the main target - the arrow behind the parapet. To hit the target with a height of 0,3, the main way of shooting a machine gunner - with a direct shot - you need to add a mark to the sight, the height of which will be 0,3; we denote this label by “P 0,3”.

With modern sights, reducing accuracy will not increase the likelihood of hitting 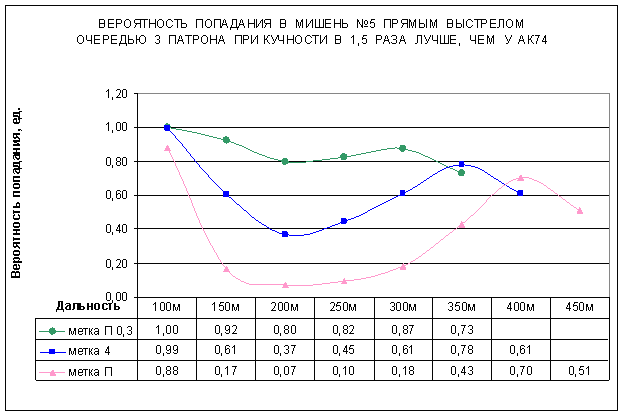 Fig.5. The graph is based on the author's calculations.

In Tab.1 we compare how the probability of hitting automatic machines with improved accuracy is changed: A-545 and AK-12. 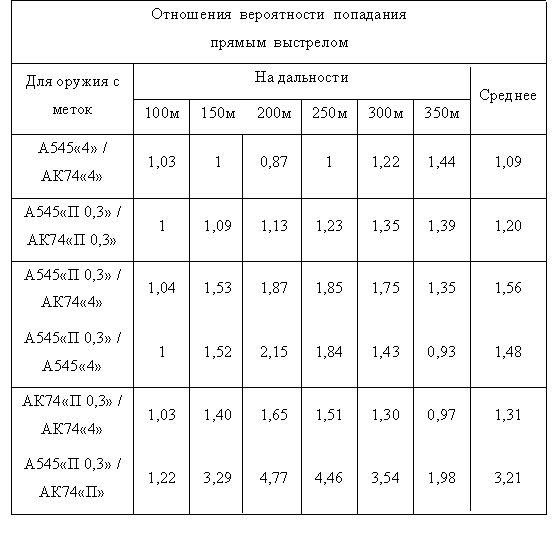 Tab.1. Indicators A-545 are applicable to other machines that have external ballistics AK-74, but accuracy in 1,5 times better, for example, to AK-12

The main conclusions are:

A separate calculation shows that with improved accuracy in 2, the probability of hitting with the “4” tag at the 200 range decreases even more - to 0,30. And with accuracy in 18-20, times better than AK-74 (the first two bullets of the AH-94 queue) the probability of hitting the “4” mark is indistinguishable from zero, not only at the 200 range, but almost everywhere where STF went beyond the contours targets, that is, at ranges from 150m to 300m.

Thus, for modern sights (for the “4” tag), the better the accuracy of machine gun shooting is, the lower the probability of hitting the main target at ranges from 150 to 250-300.

If you do not fix the sights, then upgrading to new machines will be meaningless, as happened with the AN-94.

2. The “P 0,3” label will significantly increase the probability of being hit on all machines.

AH-94 with the label "P 0,3" would have a chance of hitting the first two bullets significantly better than A-545. However, on the AH-94 they installed an aperture sight on the M-16, which not only does not contribute to aiming at the lower edge of the target with a direct shot, it also does not have at least the “3” mark. Unsuccessful sights - this is the reason for the lack of demand for the AN-94.

A non-discrete passive sight is more effective than a direct shot.

The definition of accurate shooting is best formulated in the monograph of the Central Research Institute of Information "The effectiveness of automatic firing weapons":" 3.5. The degree of combining the midpoint of hits with the center of the target determines the accuracy of shooting.»[1, page 121].

In Russia, a non-discrete passive sight has been patented, which makes it possible to aim at a target “person” as simply and as quickly as with a direct shot. At the same time, the sight at sufficiently long ranges keeps the STP close to the center of real targets in battle.

A non-discrete passive sight on the A-545 and AK-12 will increase the probability of getting 1,19 times, on average, compared to the “P 0,3” mark, and also increase the effective range of the fire by 150-200. And this sight is passive, that is, it does not radiate any electromagnetic impulse (laser, etc.), therefore it does not warn the target because it is aimed at it, and it does not unmask its arrow [5].

There are no objective obstacles to the introduction of the “P 0,3” tag and non-discrete passive sight.

The introduction of a nondiscrete passive sight will require OCD, as well as some retraining of machine gunners. But for OCD, the technologies and materials available in optical instrument making are sufficient, and the price of the sight will be no higher than the price of current optical and night sights for automata. The use of a non-discrete passive sight is intuitive and its development will not be a problem for any category of military personnel, including draftees.

Now, when it is necessary to replace sights with the tag “4”, it’s time to put a non-discrete passive sight into supply, otherwise our troops will remain only with an obviously insufficiently accurate direct shot for several decades.

A direct shot labeled “P 0,3” or a non-discrete passive sight will increase the combat effectiveness of both the assault rifles and those with improved accuracy and undergoing state tests.

Implementing scopes labeled “P 0,3” and / or non-discrete passive sights is a priority and no alternative. In the case of a lack of funds at the same time for new sights and new machines it is necessary to introduce new sights, and not new machines.